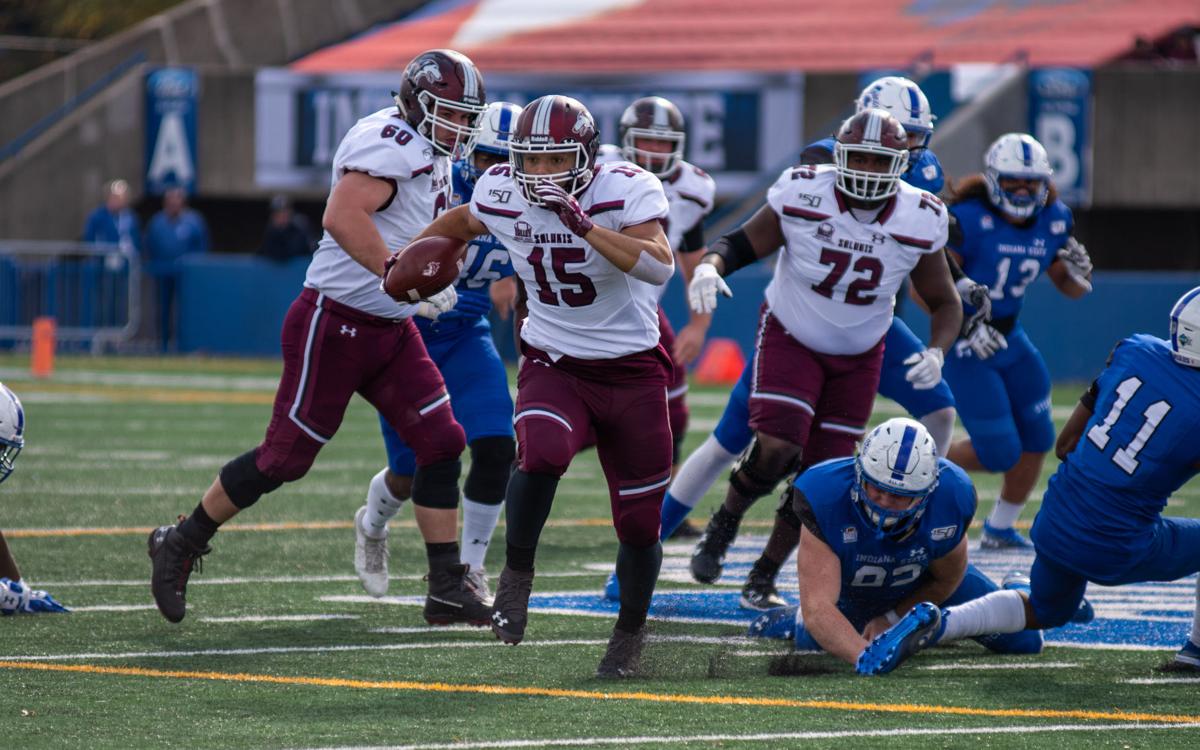 SIU running back Javon Williams Jr. breaks free for a big gain at Indiana State Saturday. Williams rushed for a 54-yard touchdown on his first touch at Memorial Stadium, and finished the Salukis' 23-14 win with 84 yards and two scores on 12 carries. 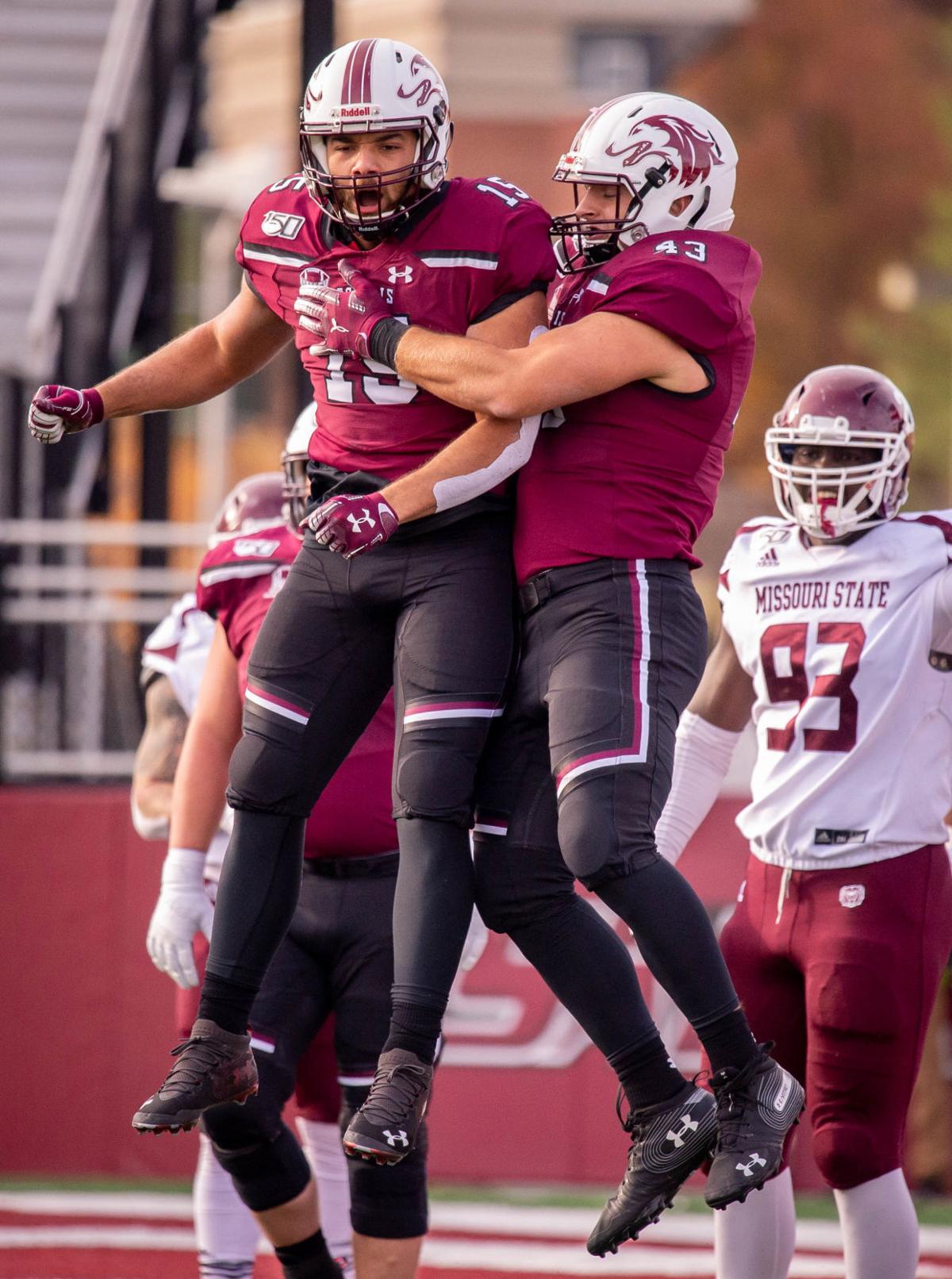 Southern Illinois Salukis running back Javon Williams Jr. (15) and fullback Jacob Garrett (43) celebrate a touchdown by Garrett during a game between the Salukis and the Missouri State Bears this season at Saluki Stadium in Carbondale. 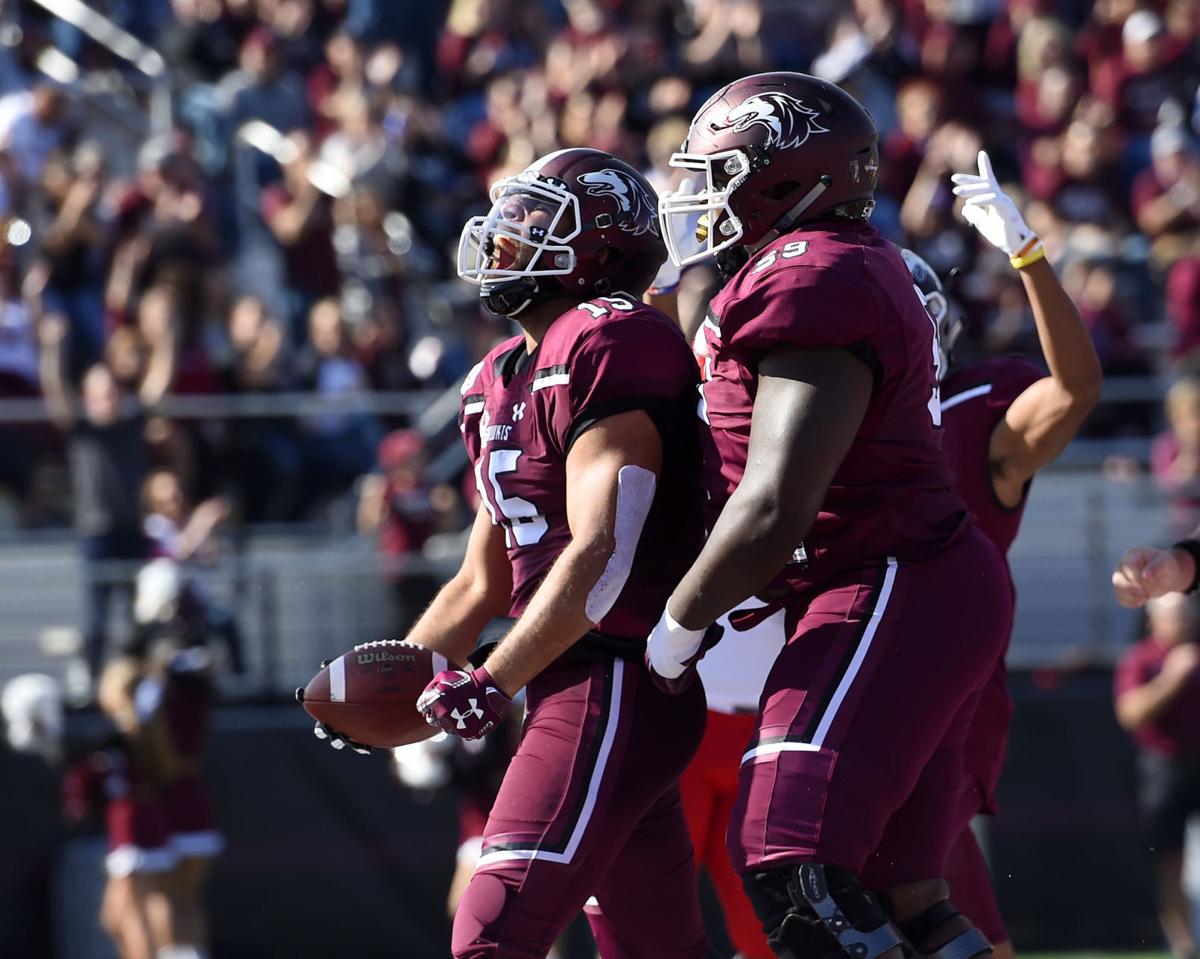 SIU running back Javon Williams Jr. (15) celebrates after scoring on a 7-yard touchdown run during the first quarter against Youngstown State at Saluki Stadium on Oct. 19, 2019.

CARBONDALE — Even when the whole stadium knows 6-foot-2, 245-pound running back Javon Williams Jr. will get the football, the former Centralia quarterback finds a way to make something happen.

The leading scorer in the Missouri Valley Football Conference in 2019 with 19 touchdowns, Williams averaged 6.4 yards a carry on 162 attempts. He lost a total of 27 yards in 12 games, and helped the Salukis rush for over 200 yards in six straight games going into the spring season opener Saturday at North Dakota.

"He's willing to go and fight for those extra tough yards," SIU coach Nick Hill said. "We're going to get all different types of looks of ways to stop Javon, they'll have their plan and practice. Sometimes there's going to be an extra guy in the box, Javon's special talent is usually making that guy either have to tackle him, or he makes him miss."

Williams' mentality of never going down without a fight came from his dad, when he was a standout basketball and baseball player, too. His dad, Javon Williams Sr., didn't want his son playing football. Then he watched him take a kickoff return 85 yards to the house. Williams' senior year, he rushed for 2,395 yards and 30 touchdowns, and passed for 1,967 and 22 scores. His 52 touchdowns tied John Dergo of Morris High School for the second-most in IHSA history in one year.

"When he saw that I could play some football, the rule was 'Every time you get the ball, you gotta take one past the goalline,'" Williams said. "I took that into perspective, and made that my mentality, so every time I run, I run like it's my last run, and it just works out."

Williams rushed for 100 yards or more six times in 2019, and with seven other starters back on offense, could find some holes. Quarterback Karé Lyles (1,569 yards, 12 touchdowns, eight interceptions) returns for his second season as the starter, and three are back on the offensive line. Senior wide receiver Landon Lenoir enters the spring tied for 15th in school history in receptions (101), 21st in yardage (1,175) and five career receiving touchdowns. Senior Avante Cox, a preseason all-conference pick, led the team in receiving with 47 catches, 617 yards and five scores in 2019. He was also the team's fourth-leading rusher, with 212 yards and three scores for a 7-5 club that nearly made the playoffs.

The fact the Salukis were left out of the 24-team field still drives them.

"It made us put a chip on our shoulder. It made us come to practice with a different grit to us," Williams said. "It allowed us to break through our comfort zones, and put us in uncomfortable situations. Make us better, individually, and coach tells us all the time about that day that we didn't make it. It stings, after not making it after we defied the odds to what our record would be."

Ranked in the preseason for the first time since 2011, the Salukis hope to make it impossible for the FCS postseason selection committee to keep them out. Defensive end Anthony Knighton is poised to become SIU's all-time sacks leader, linebackers Makel Calhoun, Bryce Notree and Bryson Strong all have extensive starting experience, and the Salukis spent almost the entire offseason bolstering the secondary that lost NFL draft pick Jeremy Chinn.

Qua Brown, the team's leading tackler in 2019, entered the transfer portal last fall but decided to come back to the team. So did former defensive back James Ceasar, his conference's defensive player of the year at Division II Ferris State in 2019. Sophomore safety Clayton Bush, who intercepted a pass in the end zone against 25th-ranked SEMO in the team's only game last fall, came over from Western Kentucky and is slated to start at North Dakota.

Kicker Nico Gualdoni returns for another senior season, and punter Jack Colquhoun averaged 40.9 yards a kick in his first season in American football. The native Australian put 13 of his 51 punts inside the 20-yard line in 2019 and had 12 that went over 50 yards.

Hill said his veteran roster helped the team progress during the strangest offseason in history. SIU had to battle class schedules during training camp, COVID-19 protocols, and a change in the schedule after Indiana State opted out of the 2021 spring season.

"We've had some great guys lost after that 2019 team, but we have a lot of guys playing in this game Saturday who have played a lot of snaps for us in the past," Hill said. "They know the routine, we've traveled together, won games on the road together. That means a lot. The maturity and experience is what has carried us through this time and I'm 100% confident we'll be ready to go on Saturday."

Williams believes the veteran roster will play like this is their last chance to make the postseason. The Salukis haven't made the playoffs since 2009, and might have to win the MVFC to end that streak. Only six at-large playoff bids are available this spring.

No. 1 — Williams running amok: Javon Williams Jr. led the MVFC with 19 touchdowns in 2019, and averaged 6.4 yards a carry despite a huge target on his back.

No. 2 — Lyles protecting the football: Quarterback Karé Lyles led SIU to five straight wins in 2019 and a close win last fall. Lyles threw an interception in his first four games, but only four the last six in 2019.

No. 3 — Big when it counts: SIU had a lot of arguments why it should have been in the playoff field, but the reason it was left out was because it had zero wins against teams in the field. The Salukis have four preseason top-10 teams on their schedule, three of them at home.

CARBONDALE — The SIU football team is getting some reinforcements for the start of its second training camp in the last six months.

CARBONDALE — He joined the watch list for the Jerry Rice Award, which goes to the top freshman in the FCS, a few weeks ago. And after rushing …

Saluki Football 4-Down Territory: A look at Schuster, Schweigert weighs in on Williams, and Knighton's records chase

A look at UND's new quarterback, Kyle "Bubba" Schweigert weighs in on Javon Williams Jr., and the first kickoff of the spring season, all in t…

CARBONDALE — The odds were against the SIU football team in 2019.

SIU running back Javon Williams Jr. breaks free for a big gain at Indiana State Saturday. Williams rushed for a 54-yard touchdown on his first touch at Memorial Stadium, and finished the Salukis' 23-14 win with 84 yards and two scores on 12 carries.

Southern Illinois Salukis running back Javon Williams Jr. (15) and fullback Jacob Garrett (43) celebrate a touchdown by Garrett during a game between the Salukis and the Missouri State Bears this season at Saluki Stadium in Carbondale.

SIU running back Javon Williams Jr. (15) celebrates after scoring on a 7-yard touchdown run during the first quarter against Youngstown State at Saluki Stadium on Oct. 19, 2019.