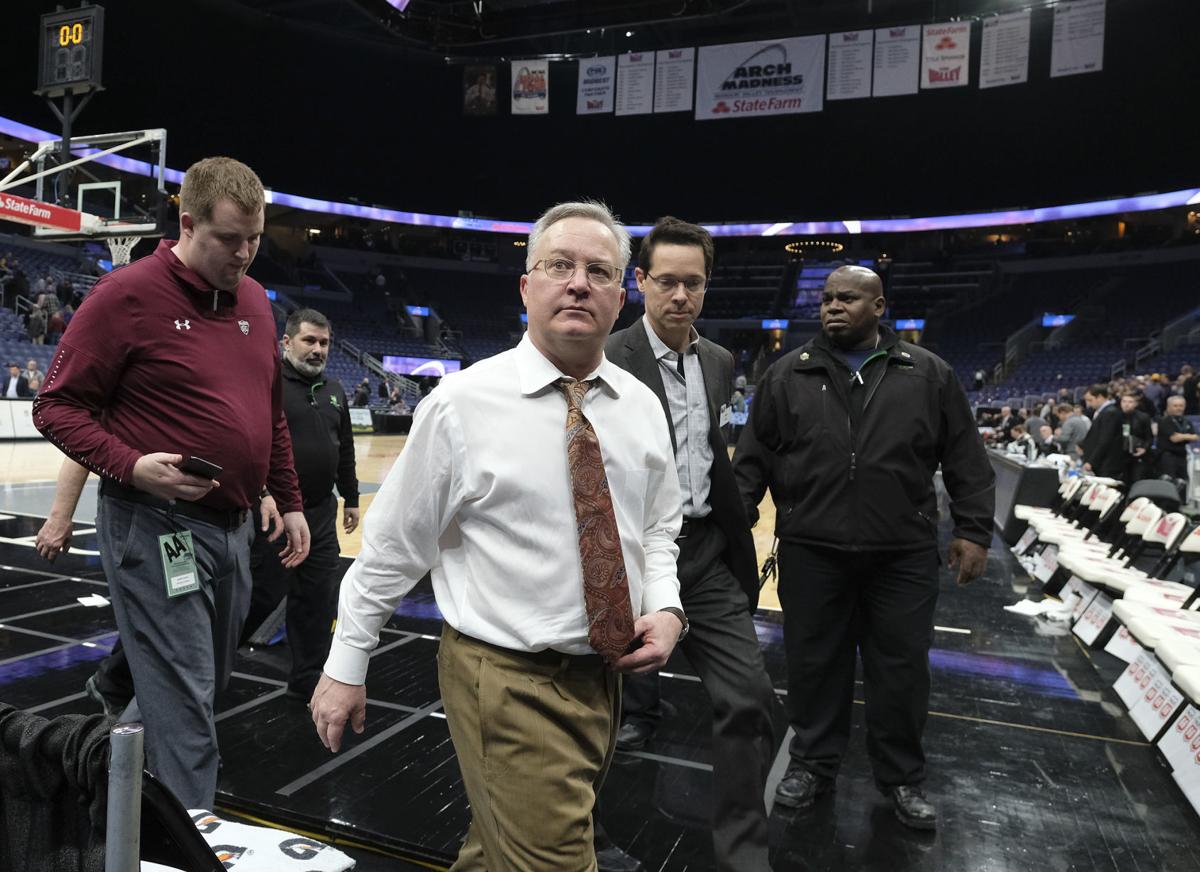 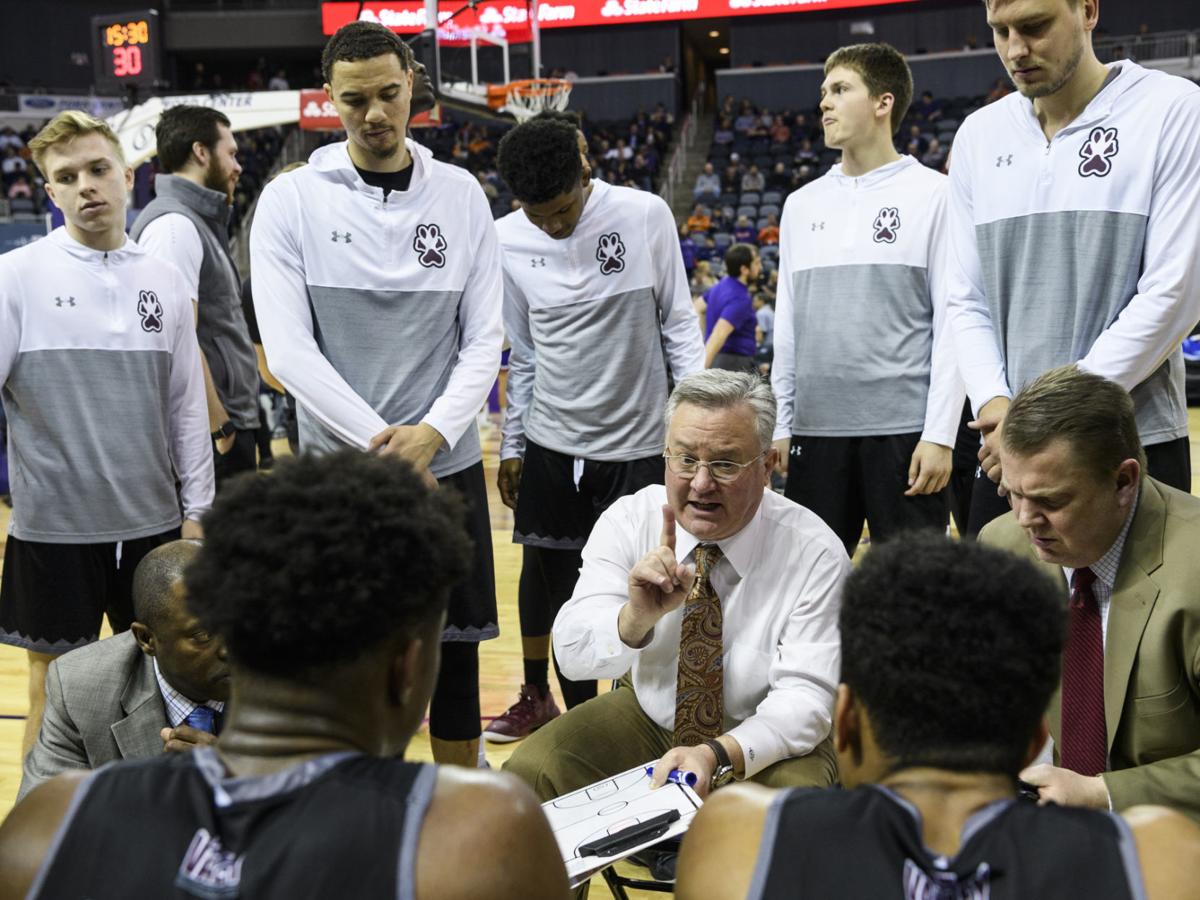 Southern Illinois University Head Coach Barry Hinson (center) talks to his team during a timeout in the second half against the University of Evansville Purple Aces at Ford Center in Evansville, Indiana on Wednesday. 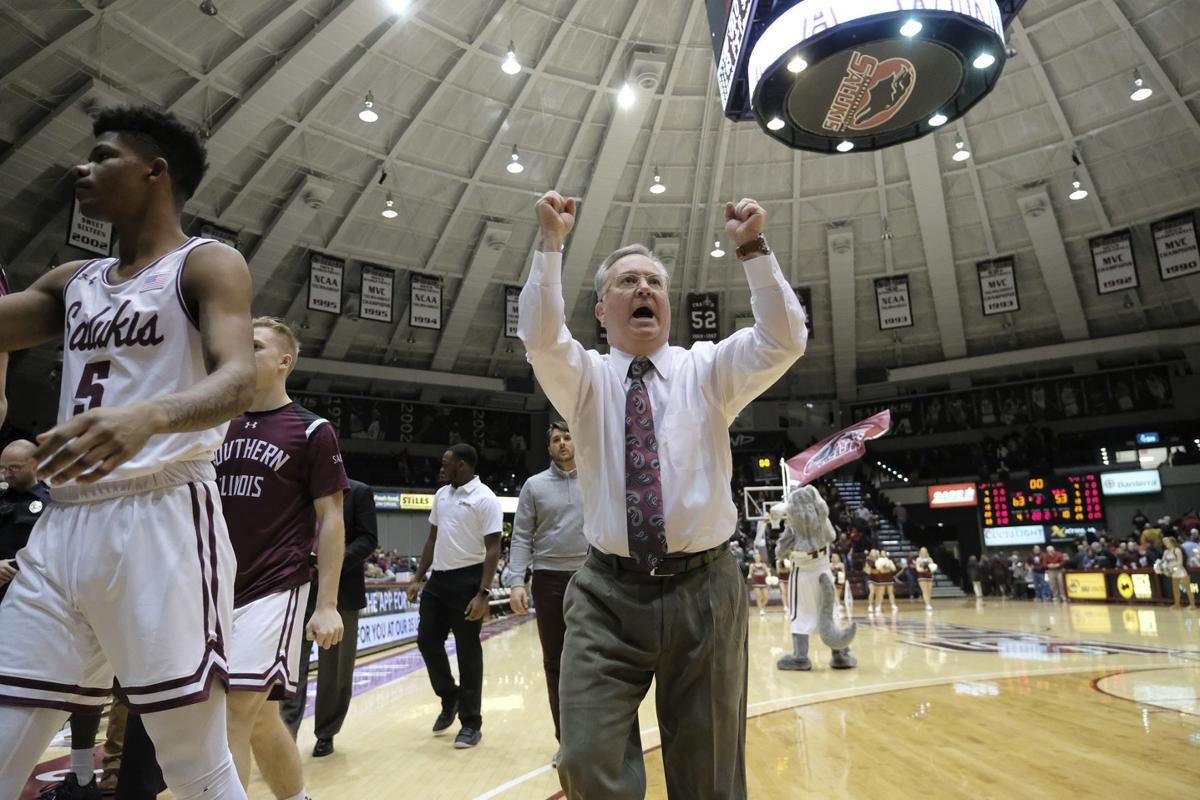 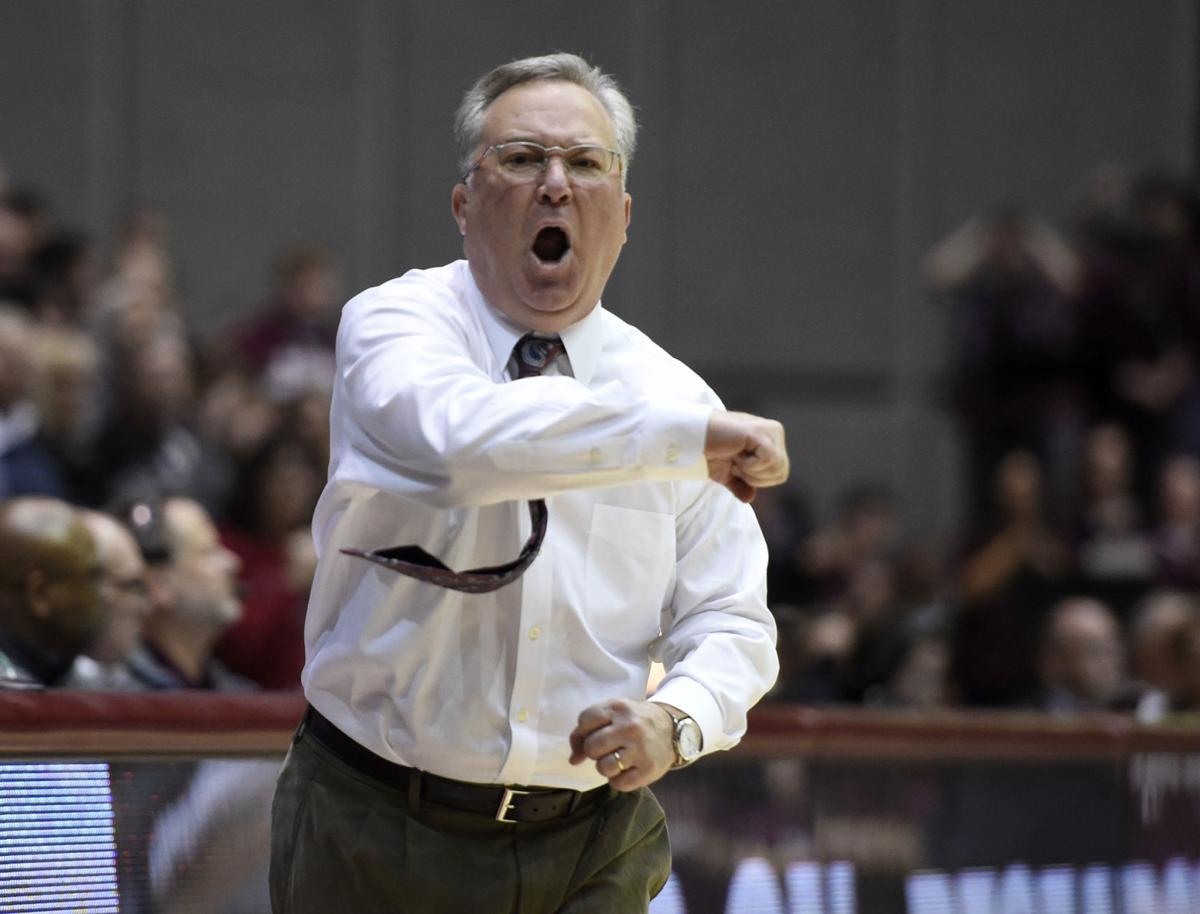 SIU head coach Barry Hinson celebrates late in the second half against Loyola at SIU Arena on Sunday in Carbondale. The Salukis went on to win 63-53. 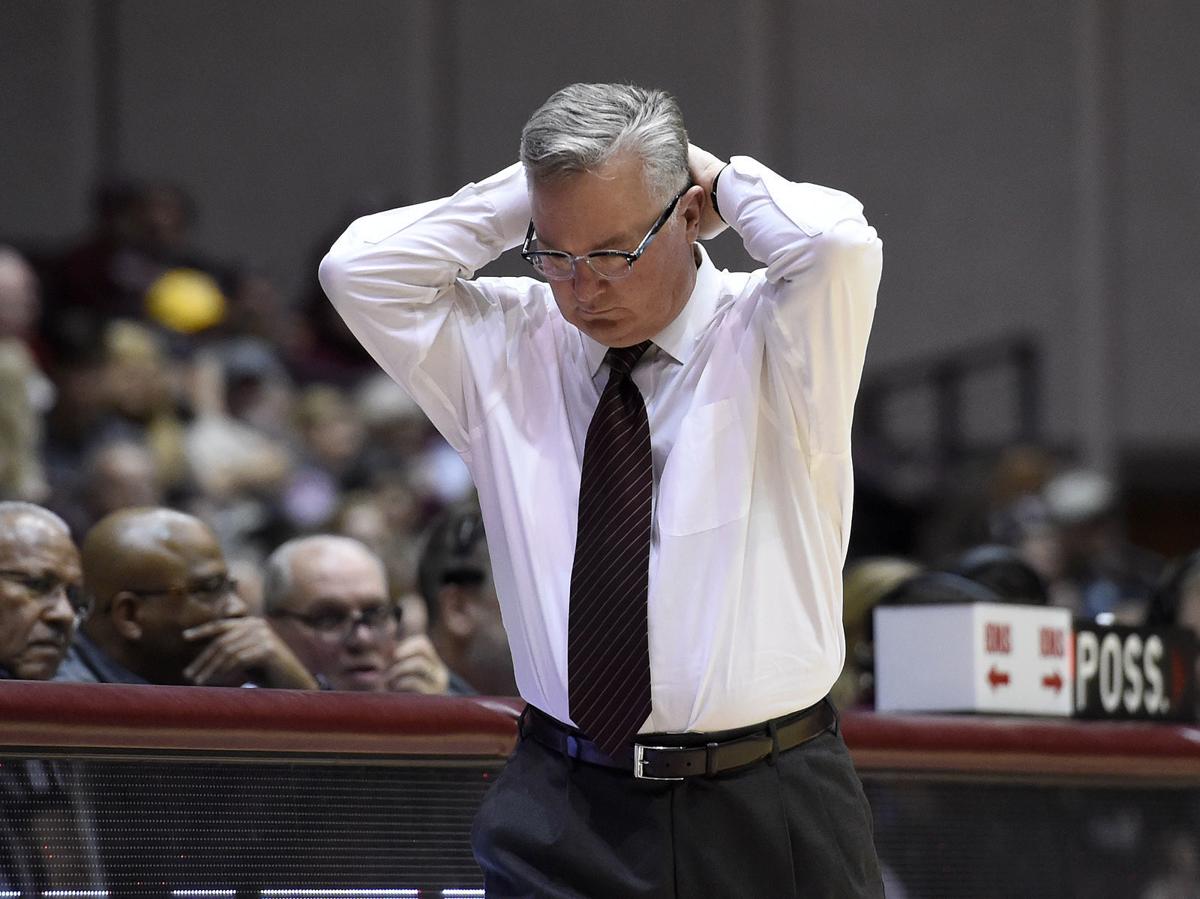 SIU head coach Barry Hinson shows his frustration as the Salukis fall behind during the second half against Valparaiso at SIU Arena on Saturday in Carbondale. Valparaiso held on to win 65-61.

Barry Hinson, the dean of Valley coaches and fourth in conference history in league victories, stepped away from the Salukis in a tearful goodbye at the end of his postgame press conference. Third-seeded SIU lost to sixth-seeded Northern Iowa 61-58 in the final quarterfinal of the day at the Enterprise Center to end a 17-15 season. The Salukis finished third in the MVC with a 10-8 record and said goodbye to six seniors.

Hinson let seniors Armon Fletcher and Kavion Pippen, who took questions alongside him during the postgame press conference as is the protocol at the MVC tournament, leave the table before saying goodbye to SIU and the Valley after 16 seasons. Hinson said at the end of last season, when SIU missed the postseason for the 10th straight year after getting beat in overtime by Illinois State, he made a "pact" with former SIU Chancellor Carlo Montemagno that if he did not make the NIT or the NCAA Tournament this season he would step away.

Montemagno died last October while battling cancer at the age of 62. The athletic director at the time last season ended, Tommy Bell, has since been replaced by Jerry Kill. Hinson did not take questions after his speech at the table. He stepped down and fell into Kill's arms just down the stairs. The two embraced for a few minutes, then left through a side door without taking questions.

Hinson has one year left on his contract, which runs through the 2019-2020 season, after signing an extension in 2016. He makes about $350,000 a year, plus annual university increases and incentives, but his buyout for next season is only $175,000. It is not clear yet if SIU will pay Hinson the remaining amount of his deal or have made an agreement.

Hinson went 116-111 in seven seasons at SIU (60-66 in MVC games) and is 321-251 overall as a head coach at Oral Roberts, Missouri State and in Carbondale. His 285 wins while at Missouri State and SIU rank fourth all-time in league history.

Hinson never reached the NCAA Tournament, although he is also part of two of the biggest snubs by the NCAA selection committee in history. Hinson's 2005-06 club that went 22-9 and finished tied for second in the MVC, was left out of the NCAA Tournament despite an RPI of 21. It was the highest RPI of any team in the history of the tournament to not get in as an at-large or automatic bid. His 22-11 squad the following season achieved an RPI of 36 and was left out.

"If you quote me on one thing, I'd like for you to quote me on this," Hinson said, his voice shaking. "I am so sorry. I am so sorry that we couldn't get back to the tournament. It's haunted me my entire life. And I'm a man of faith, and my dad taught me a long time ago I know not what my future holds, but I know who holds my future."

SIU could return two starters next season, incoming senior guards Aaron Cook and Eric McGill, as well as two other letterwinners. Cook started all 32 games and was the Salukis' fourth-leading scorer at 10.4 points per game. The 6-foot-2, 185-pound combo guard led the team with 118 assists and shot 39.4 percent from the field. Cook made 40 3-pointers, tying senior guard Marcus Bartley for the team lead this season. McGill started 23 of 30 games, led the team in steals with 48, and was SIU's fifth-leading scorer (9.5 points per game) and second-leading rebounder (5.7 per game).

Freshman guard Darius Beane, the son of assistant coach Anthony Beane Sr., played in all 32 games off the bench. Third-year sophomore guard Brendon Gooch played in 16, all off the bench.

Hinson and his staff signed three players for the 2019-2020 season and redshirted four, forwards Sam Shafer, Amadou Fall, Sekou Dembele, and walk-on guard David Swedura. The next coach of the Salukis could have three open scholarships to recruit to if Jimmy Beane, an incoming freshman guard next season that is paying his own way this year in order to qualify for a scholarship, doesn't return. SIU signed guards Lance Jones of Evanston High School, Evan Taylor of Glenbard West High School and forward Chris Payton of Bloomington High School for next season.

ST. LOUIS — They entered their final Missouri Valley Conference tournaments with higher expectations than falling in the first game at the Ent…

Kill wants next Saluki coach to have Midwest ties, discipline and toughness

SIU athletic director Jerry Kill wants the next men's basketball coach to have Midwest ties, discipline and toughness, he said at a news conference Monday.

This week we look back at the biggest sports stories of the year, from Murphysboro overcoming a teacher's strike just in time to reach the sta…

Opinion | Voice of The Southern: Thumbs up to Saluki Marcus Bartley, thumbs down to possible census undercount

Southern Illinois University Head Coach Barry Hinson (center) talks to his team during a timeout in the second half against the University of Evansville Purple Aces at Ford Center in Evansville, Indiana on Wednesday.

SIU head coach Barry Hinson celebrates late in the second half against Loyola at SIU Arena on Sunday in Carbondale. The Salukis went on to win 63-53.

SIU head coach Barry Hinson shows his frustration as the Salukis fall behind during the second half against Valparaiso at SIU Arena on Saturday in Carbondale. Valparaiso held on to win 65-61. 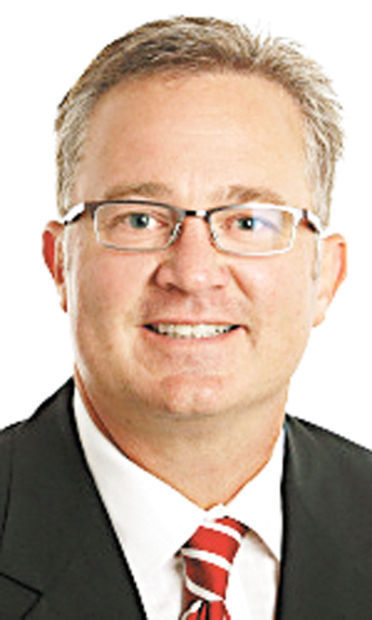