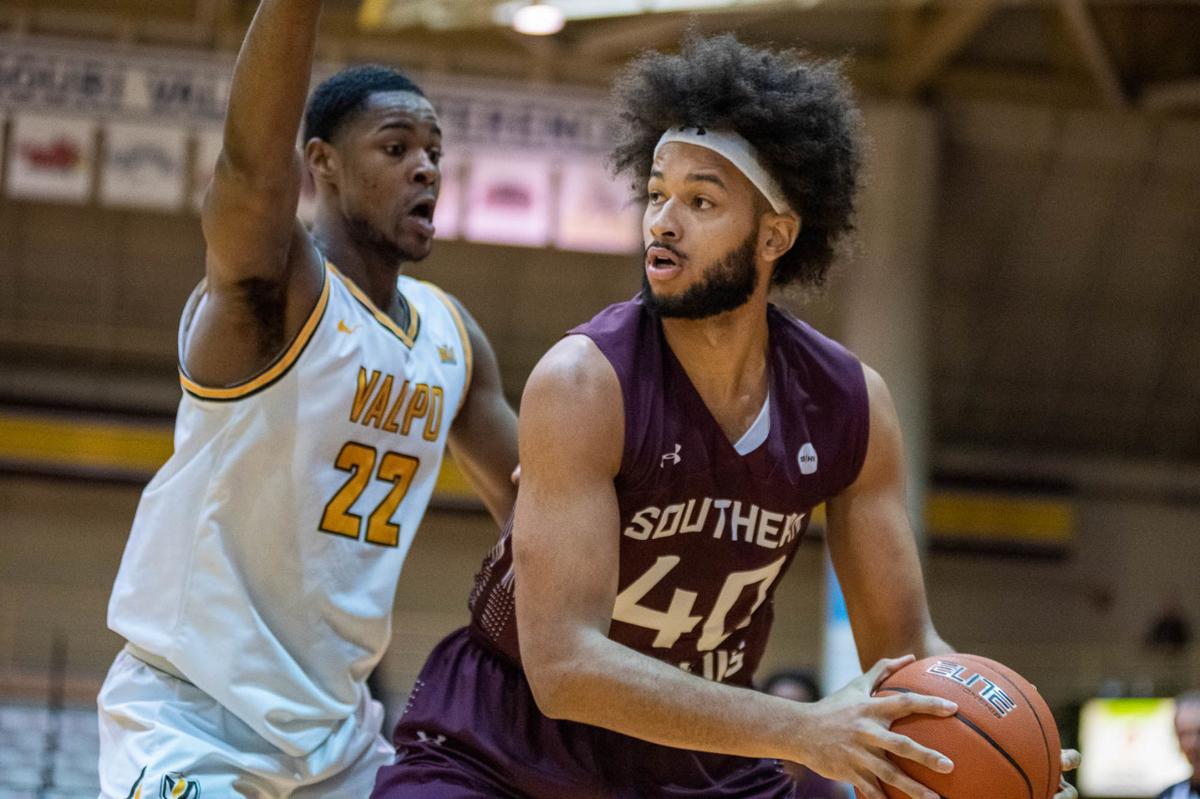 SIU's Barret Benson surveys the court on Wednesday at Valparaiso. 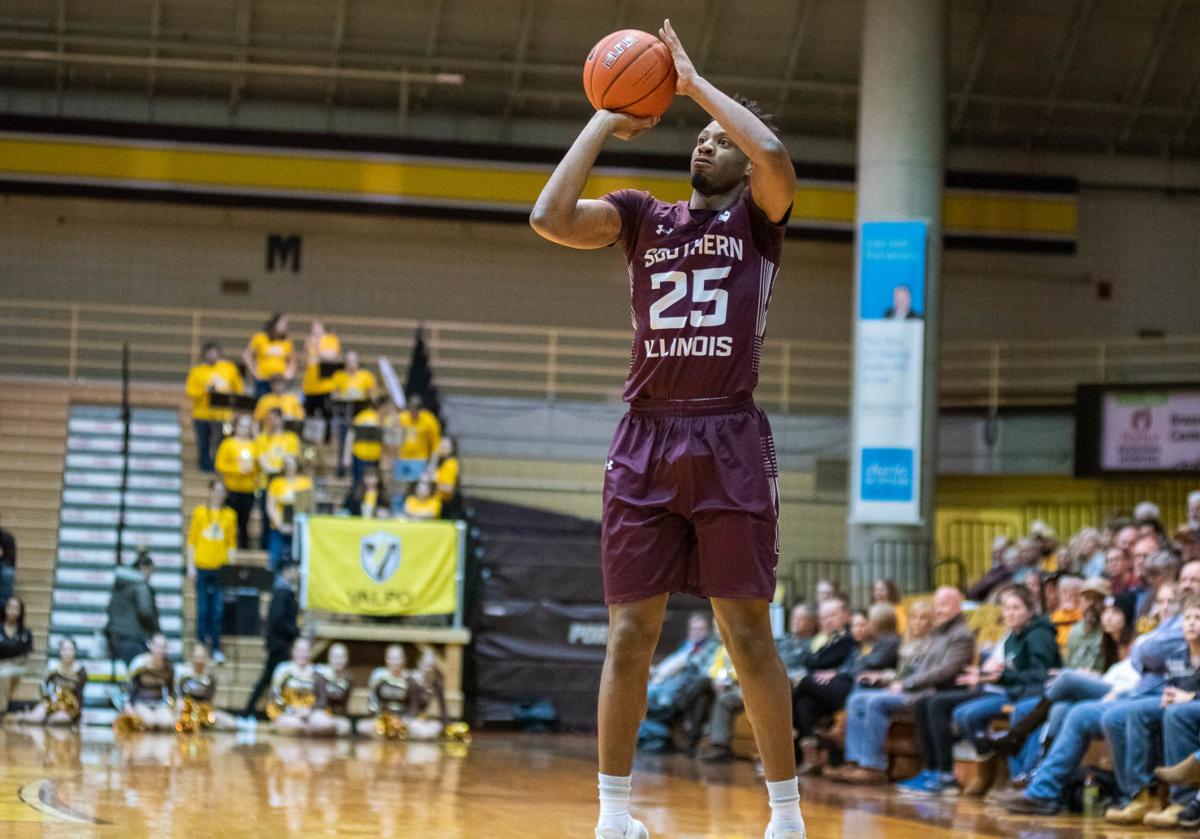 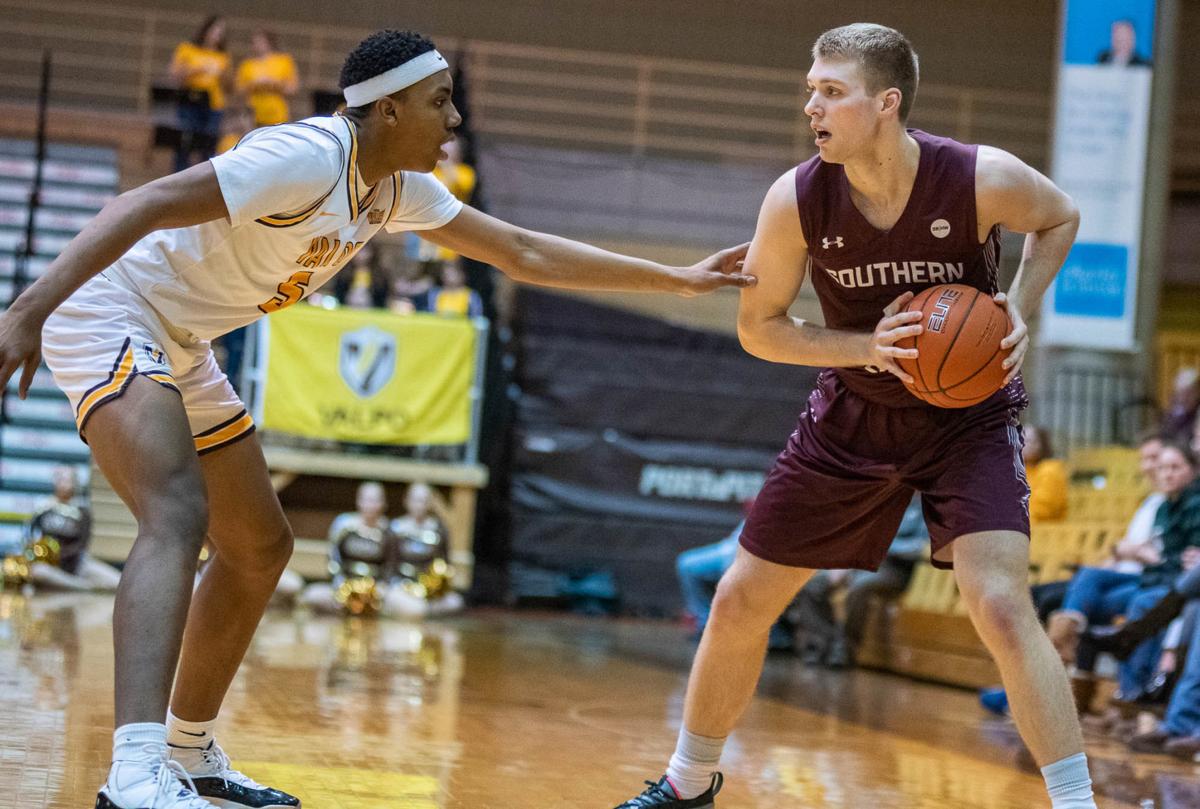 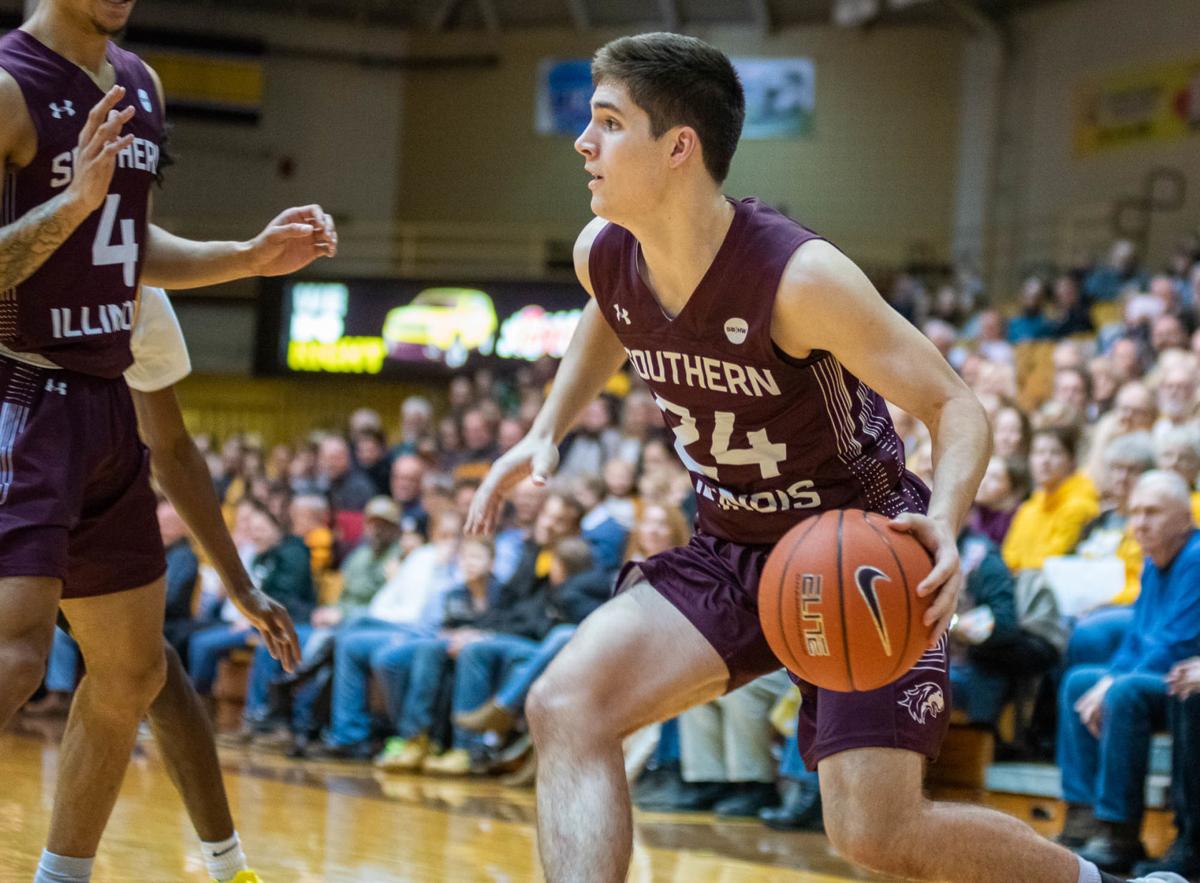 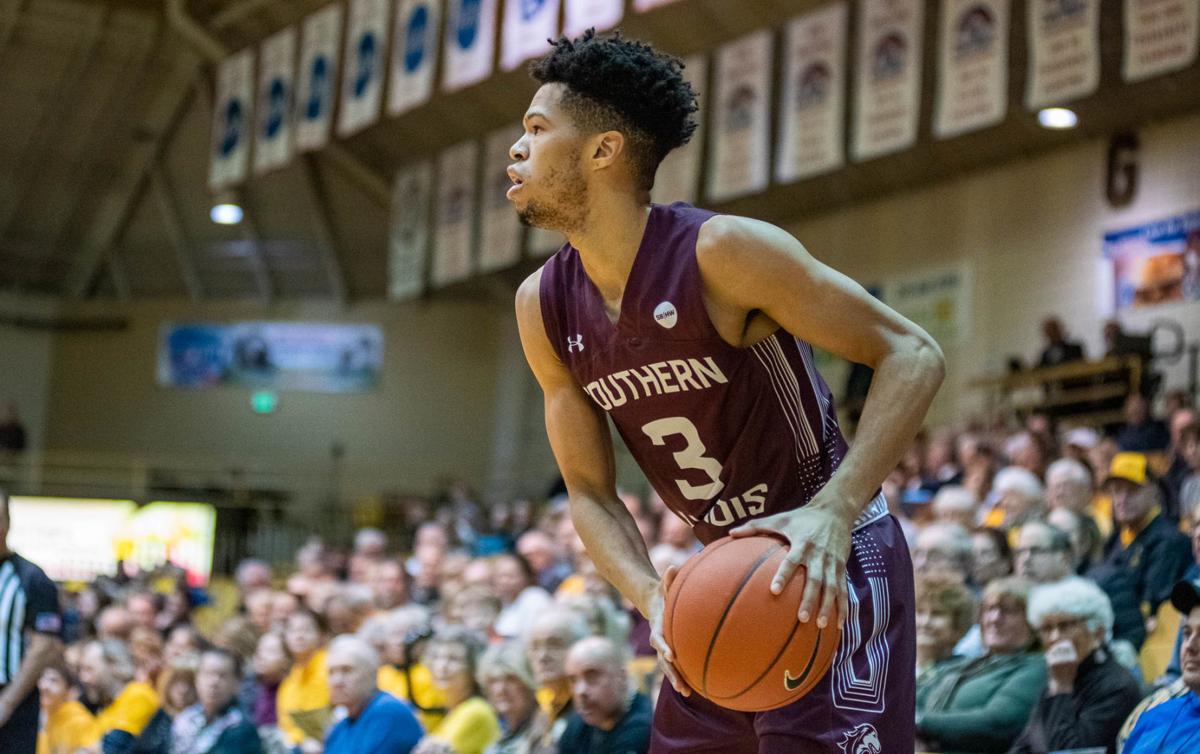 VALPARAISO, Ind. — Marcus Domask saw Barret Benson with his defender on his back, just under the rim, and let the lob fly.

Just when the 6-foot-10 Benson seemed to have his eyes on another easy two, he saw the ball continue to rise, and could only watch it sail out of bounds beyond the baseline. It was that kind of night for SIU's men's basketball team at Valparaiso.

The Salukis missed 10 of their last 11 shots to end the first half, a 16-point effort that was their lowest-scoring opening 20 minutes of the season, and fell for the first time since Jan. 16. Freshman forward Ben Krikke scored 15 points and the Crusaders used a balanced attack to beat SIU 55-38 at the Athletics-Recreation Center.

"That's a very good team, but I think that we simply weren't ready to play tonight," SIU guard Eric McGill said. "I feel like we came out lackadaisical. We simply didn't play like us tonight."

The Salukis (15-11, 9-4 Missouri Valley Conference) ended their seven-game winning streak, the longest since 2006-07, and fell into a tie with Loyola (17-9, 9-4) for second place in the Valley with five games to go. Northern Iowa (22-3, 11-2) moved two games ahead of the Dawgs and Ramblers with a win against Illinois State on Wednesday night.

Valparaiso (13-13, 6-7) moved to 9-2 at home this season and snapped a two-game losing streak. Javon Freeman-Liberty, the Valley's second-leading scorer this season, had 15 points for the Crusaders, who had 16 assists on 22 baskets. Eight different players scored.

"We got contributions from everyone," Valparaiso coach Matt Lottich said. "I've said it before, but our depth is our biggest strength. We were able to put some guys in some moments that they hadn't been in, and they were able to perform."

Krikke scored seven first-half points to lead a balanced attack from the Crusaders. Freeman-Liberty scored six, and six others had at least one bucket in the first half. Valparaiso made 13 of 25 from the field (52%) but did not attempt a free throw.

McGill's 13 points led SIU, which scored the second-fewest points since 1950. The Salukis had 36 points at Bradley in February 1981, but would have set a new school record if Ronnie Suggs didn't convert a short jump shot with 4:49 to go. Benson hit 1 of 2 free throws with 4:08 left, and SIU didn't score the rest of the game.

Benson finished with eight points and Domask had seven in the Salukis' first loss since their road game at Loyola. SIU finished with 13 field goals and 15 turnovers. The Salukis got outscored 34-16 in the paint and allowed the Crusaders 12 fast break points.

"Obviously, give credit to Valpo," SIU coach Bryan Mullins said. "I think in the first half the ball stuck too much, we kind of held it too much, it wasn't moving the way it should be moving, and then, obviously, missing some easy shots and layups, and some 3s early kind of took us out of rhythm. We could never string three or four minutes of good basketball together."

SIU trailed by 12 at the half, 28-16, after committing eight turnovers and sinking only five baskets. McGill's five first-half points led the Salukis, who missed 17 of 22 shots. Lance Jones and Brendon Gooch added three points each for SIU, which turned it over eight times and made just 3 of 12 from the 3-point line.

SIU returns home to face Bradley on Saturday afternoon. Tipoff at the Banterra Center is set for 1 p.m. The Salukis have won 10 straight games at home.

SIU struggled to find center Barret Benson when he was open, struggled to get the ball into the paint, and settled for 28 3-point shots out of its 55 Wednesday night at Valparaiso. The Salukis were simply out of sync for most of the night against Valparaiso, finishing with more turnovers (15) than baskets (13). SIU's 38 points were its second-fewest in a game since 1950.

If you would have told SIU coach Bryan Mullins Valparaiso would finish with 55 points Wednesday night, he probably would have taken it. The Salukis, as they did on offense, struggled to put three straight good possessions together at the defensive end, however, and snapped their seven-game winning streak.

Eric McGill said after the game the team just has to flush this one away and move on. That's not a bad idea. The Salukis were out of sync on offense, throwing away passes they normally complete, missing open 3s they normally make, and not moving the ball from one side to the other. On defense, they failed to get back in transition, leading to 12 fast break points for the Crusaders, and allowed Valparaiso to hand out 16 assists on 22 buckets.

SIU scored a season-low 38 points against Valparaiso last night. When the Salukis' 12th-ranked scoring defense couldn't stop the Crusaders, and the bench scored only three points, SIU fell for the first time since Jan. 16 at Loyola.

Marcus Domask continues to move up the freshman records chart and a Northern Iowa sharpshooter wins $10,000, all in today's Saluki Basketball 5@5.

CARBONDALE — SIU's men's basketball team hasn't lost back-to-back games since mid-January, but one of the streakiest teams in the Missouri Val…

SIU's Barret Benson surveys the court on Wednesday at Valparaiso.