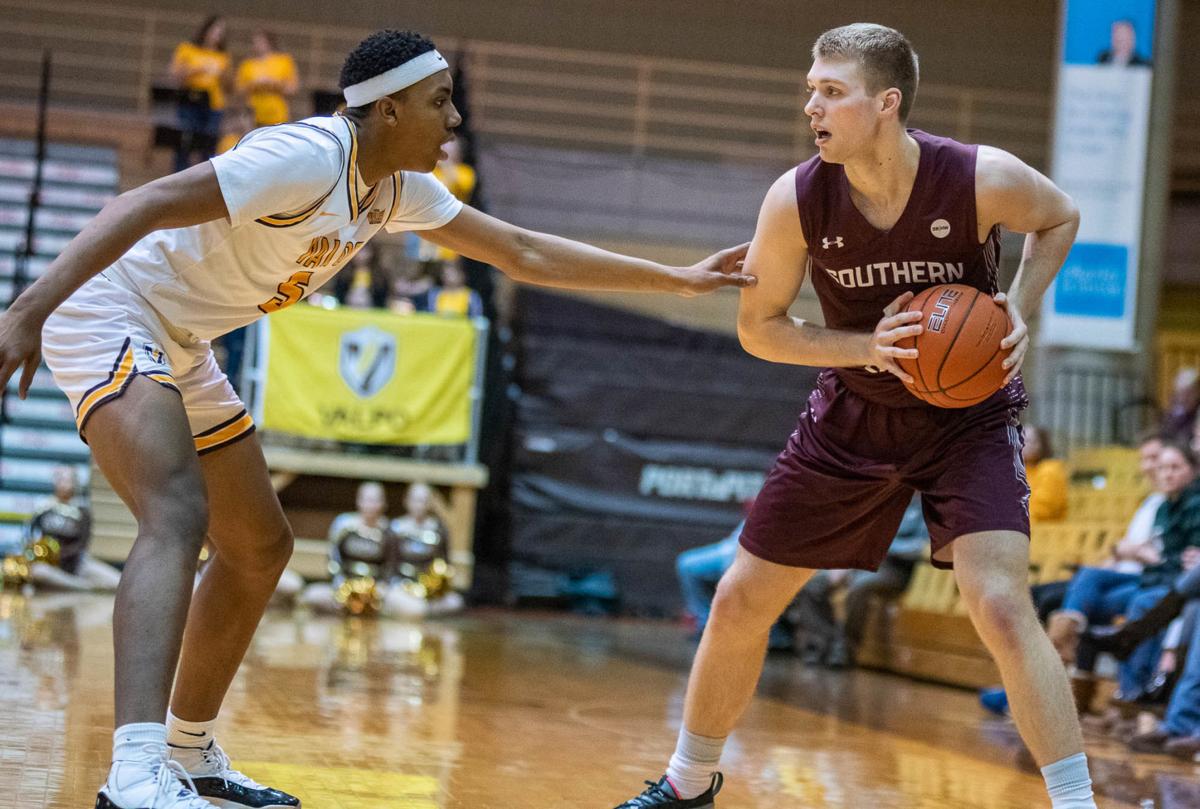 SIU's Marcus Domask surveys the court during a game at Valparaiso last season. 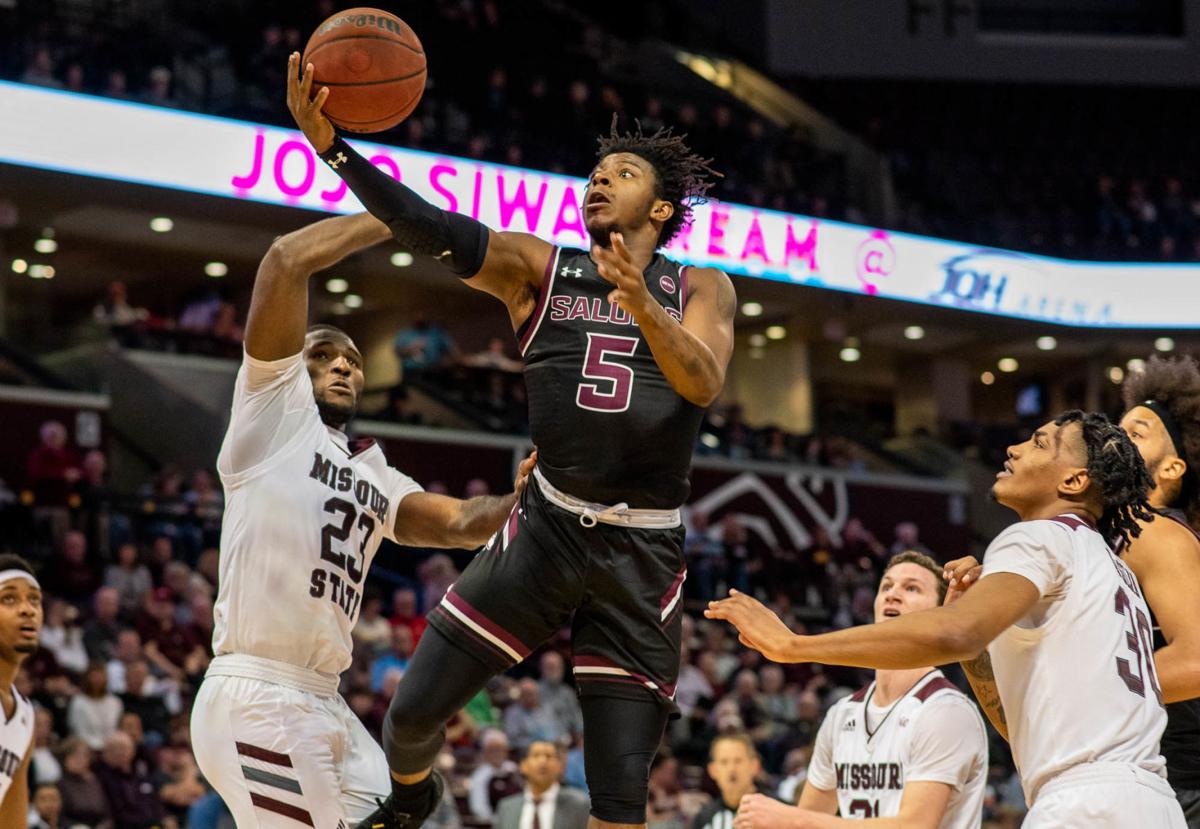 SIU guard Lance Jones goes to the rim at Missouri State on Feb. 29. Jones scored a career-high 28 points, but the Salukis fell 84-59 at JQH Arena for their third straight loss.

CARBONDALE — How do you improve on one of the best freshman seasons in school history? Play a bit faster.

Things began to slow down for SIU guard Marcus Domask quickly in his first season. The son of a longtime coach, Domask understood angles and how to turn mismatches into advantages down low with his 6-foot-6 frame, but was also an elite shooter. His 54 3-pointers led the team, and his 39.7% shooting behind the arc was eighth-best in the Missouri Valley Conference. A year after winning the MVC Freshman and Newcomer of the Year Award, Domask believes he can play even faster.

"I think I've focused on finishing around the rim, speeding up my shot a little bit, and just an overall feel for the game," Domask said. "Watching film and just putting myself in different situations. Just getting more comfortable with the ball, and comfortable creating plays."

Domask (13.6 points, 5.2 rebounds per game last season) and fellow sophomores Lance Jones (9.3 ppg., 2.9 rpg.), Trent Brown (20.6 minutes per game) and Sekou Dembele (10 games) form the core of the Salukis' resurgence under second-year coach Bryan Mullins. Jones was one of SIU's most clutch players last season, helping the Salukis win at Evansville by scoring eight of their 10 points in overtime. He averaged 18 points a game over SIU's final six games of the season, and shot 55% from the field during that stretch.

Brown, a two-time state champion in high school in Arizona, struggled from the field but found his niche as the team's top perimeter defender. He helped the Salukis lead the Valley in scoring defense (62.2 points allowed per game) and had 28 steals in 32 games. Dembele, a 6-7, 230-pound forward, is SIU's most experienced big in terms of Division I games despite playing in only 10 last season before breaking his leg at Bradley in January. Dembele, starting center Barret Benson's backup before he got hurt, made 7 of 12 from the field (58.3%) and averaged two rebounds a game. He was cleared earlier this month and could play when SIU takes on Southeast Missouri State Dec. 2 in its season opener.

None of the Salukis' new bigs have played a Division I game. Kyler Filewich is a 6-9, 250-pound freshman from Canada. Graduate transfer Anthony D'Avanzo, a 6-8, 205-pound forward, came from Division II Lewis University, where he was the team's top scorer, rebounder and 3-point shooter. Junior J.D. Muila, the 24th-best junior college player in the country, was expected to battle for a starting position but was lost for the season with a torn meniscus.

D'Avanzo can shoot it better than Benson, a 6-10 center that didn't quite make enough for defenders to always leave the paint and try to guard him on the perimeter. Mullins believes D'Avanzo also may help the Salukis inside.

"Pick and pop, make 3s, post up smaller guys. He wants to be really good," Mullins said. "He came here for a challenge. He’s got a great mindset going into his last year, and I’m looking forward to seeing the steps that he can take over the next three to four months."

SIU will get a boost from five new guards, as well, beginning with sitout Ben Harvey. The 6-5 Harvey scored 10 or more points in 19 games as a true freshman at Eastern Illinois and won the Saluki scout team a lot of drills last season. Sophomore Steven Verplancken Jr., a transfer from Division II Glenville (West Virginia) State, is a high-scoring guard (16.4 ppg.) who also handed out 86 assists against 59 turnovers. Dalton Banks, a freshman guard from Eau Claire, Wisconsin, was one of the best players in that state. Eric Butler, another freshman, helped Orlando Christian High School to the state championship. Jakolby Long, a 6-5 graduate transfer from Southern Utah, averaged six points and 2.9 rebounds a game last season for the 17-15 Thunderbirds.

SIU hasn't reached the postseason since competing in the 2008 NIT, back when Mullins was the starting point guard. The Salukis were picked fifth in the Valley's preseason poll. Domask made the preseason second team.

CARBONDALE — SIU's men's basketball team may able to trademark a new phrase before the end of the 2020-21 season: COVID-outs.

CARBONDALE — Southern Illinois University's men's basketball team knew it might run into hiccups during a season under the cloud of COVID-19, …

CARBONDALE — SIU forward J.D. Muila will miss the entire 2020-21 season after undergoing surgery Tuesday to repair a torn meniscus, the team a…

CARBONDALE — As the calendar turns closer to December, SIU men's basketball coach Bryan Mullins is looking at "all options" to find his team m…

SIU's Marcus Domask surveys the court during a game at Valparaiso last season.

SIU guard Lance Jones goes to the rim at Missouri State on Feb. 29. Jones scored a career-high 28 points, but the Salukis fell 84-59 at JQH Arena for their third straight loss.