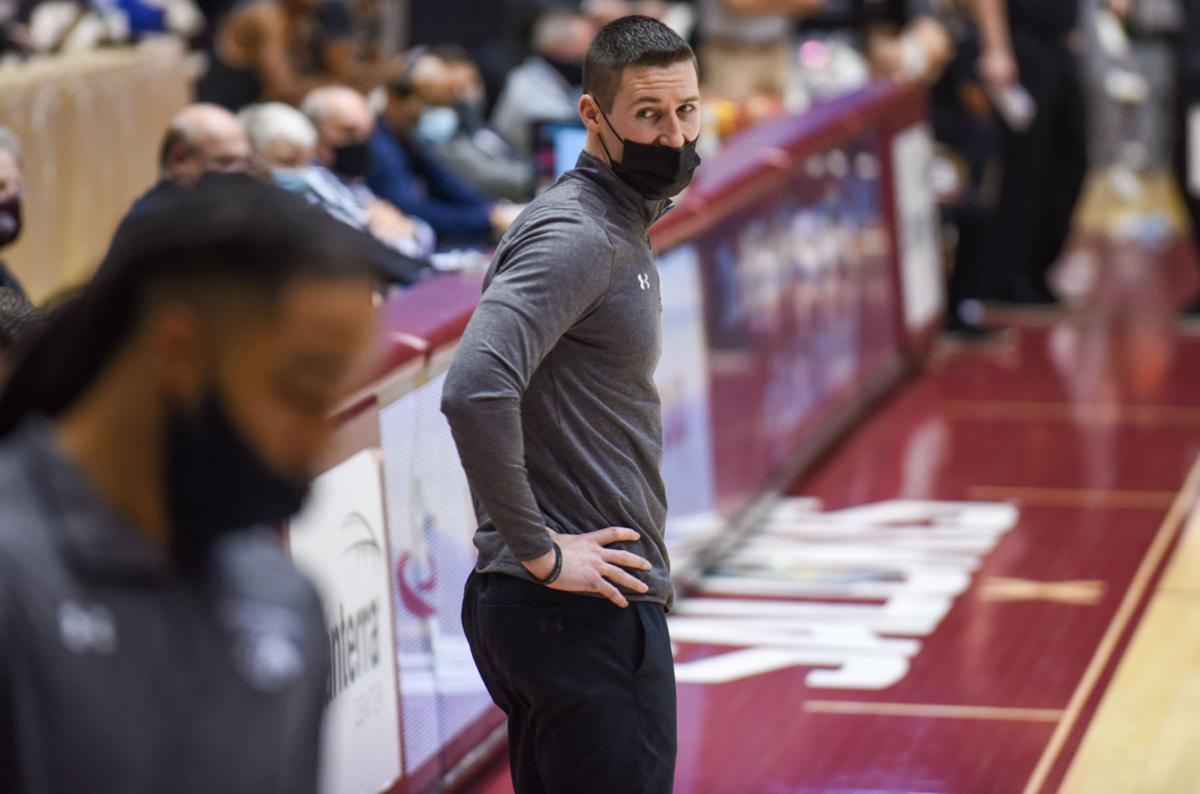 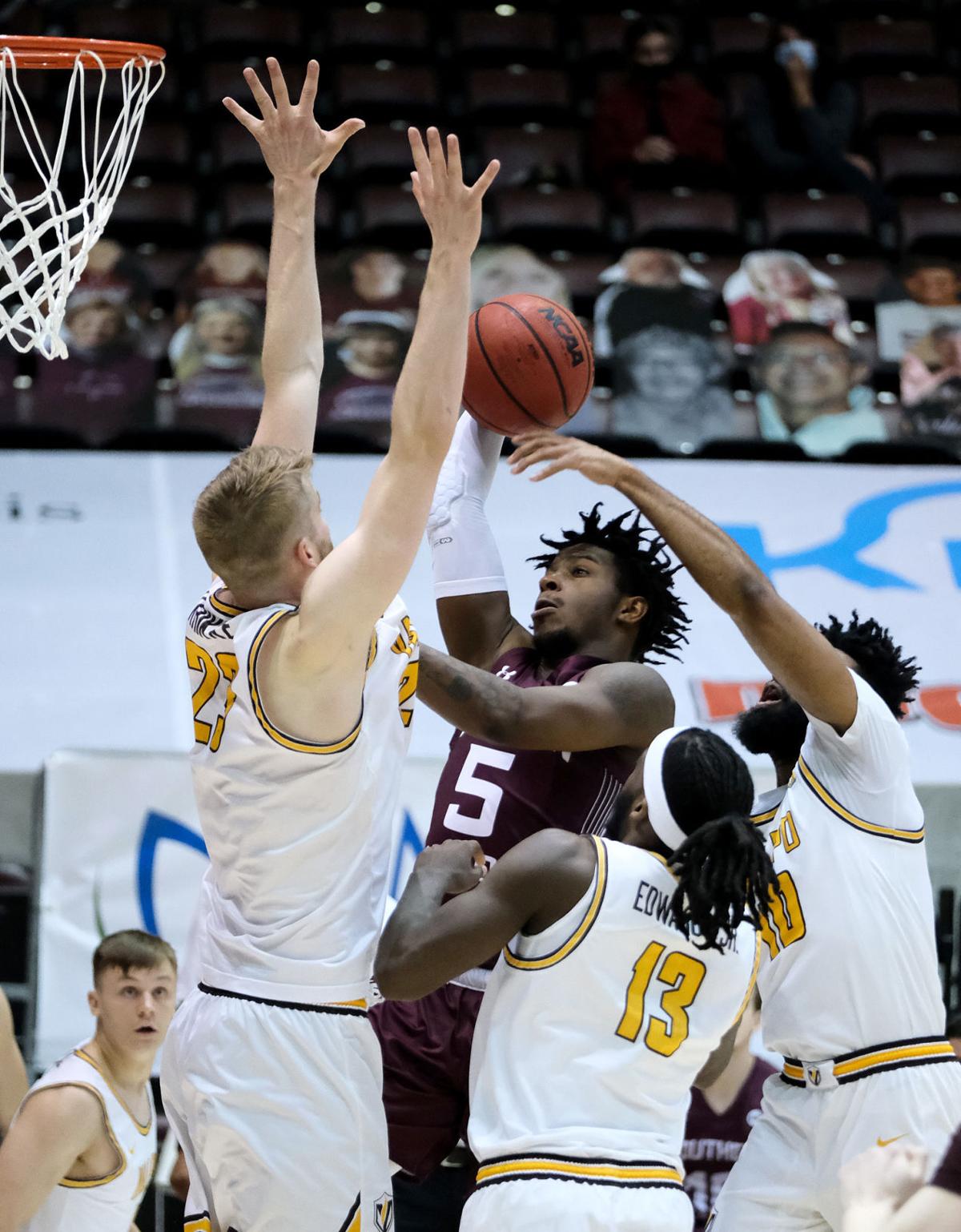 SIU guard Lance Jones (5) finds his way to the basket blocked by Valparaiso forward Ben Krikke (23), guard Sheldon Edwards (13) and guard Eron Gordon (10) during the second half at the Banterra Center on Feb. 22 in Carbondale. The Salukis went on to win 67-64. 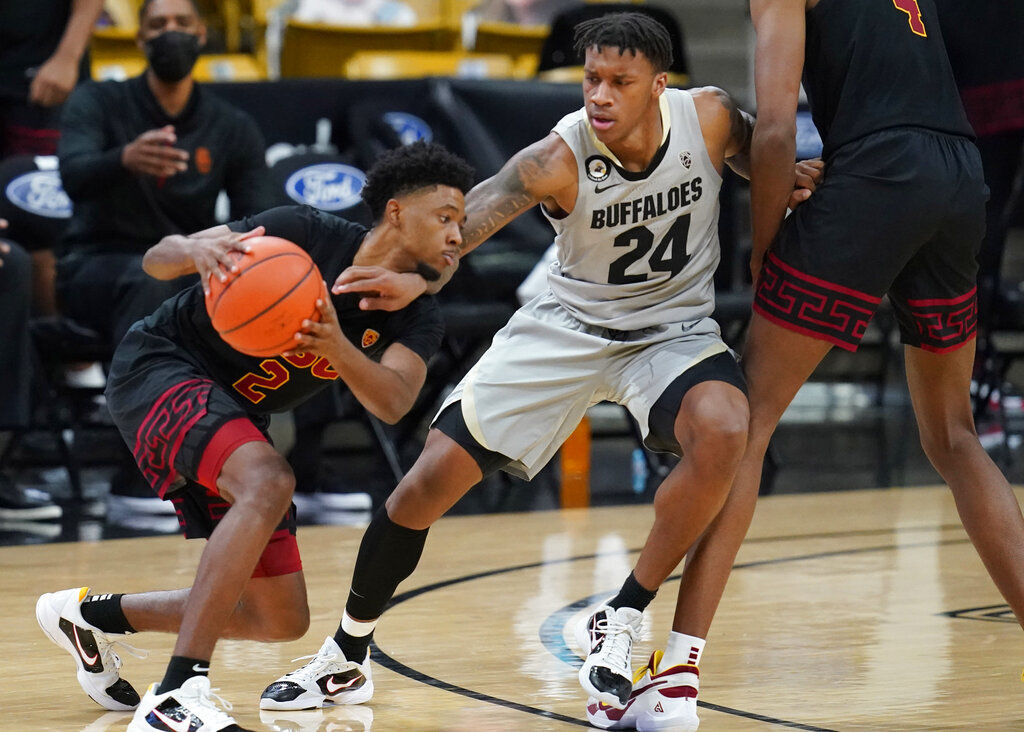 USC guard Tahj Eaddy (2) and Colorado guard Eli Parquet (24) go at it in Boulder in February in this file photo. Parquet and the Buffaloes take on SIU in the first round of the Paradise Jam in November.

CARBONDALE — SIU's men's basketball team will open the Paradise Jam against Colorado on Nov. 19 in the Virgin Islands, the tournament announced Monday.

It will be just the second meeting between the two programs, and the first since the Salukis won at Colorado in the 2000 NIT, 94-92. SIU lost at BYU to end a 20-13 season that year. It will be SIU's first appearance at the Paradise Jam, an eight-team tournament at the University of the Virgin Islands Sports and Fitness Center on Nov. 19-22. Bradley, which opens against Colorado State, Brown, former Valley foe Creighton, Northeastern and Duquesne are the other participants.

SIU will play either Northeastern or Duquesne in its second game. The winners of the first rounds get a day off before playing their next game on Nov. 21, while the losers turn around and play again on Nov. 20. SIU and Colorado are scheduled to tip-off at 7 p.m. Central time (9 p.m. in St. Thomas) in the nightcap of the event's opening day. All the games of the tournament are scheduled to air on ESPN3 or ESPN+.

Colorado went 23-9 last season, losing to Florida State in the second round of the NCAA Tournament. The Buffaloes feature the 13th-best recruiting class in the country, according to 247sports, after signing nine underclassmen, and recently added grad transfer guard Mason Faulkner from Western Carolina. Guard McKinley Wright, an honorable mention Associated Press All-American and the team's leading scorer, is entering the 2021 NBA draft.

Faulkner is one of only three scholarship upperclassmen on the current roster, with 6-foot-8 senior forward Evan Battey and 6-4 senior guard/forward Eli Parquet. Battey was an honorable mention All-Pac-12 Team pick after averaging 10.1 points and 5.3 rebounds per game last season. Parquet, a member of the Pac-12 All-Defensive Team, had 26 steals and a team-high 23 blocks last season. The Buffaloes were ranked 22nd in the final AP poll of the season and 23rd in the final coaches poll.

Colorado won the 2017 Paradise Jam, which was relocated to Lynchburg, Virginia, after Hurricane Irma and Hurricane Maria damaged the islands.

Creighton, which finished 14th in the final coaches poll of the season and 19th in the AP poll, could also be ranked when the tournament rolls around. The Bluejays finished 22-9 after their first Sweet 16 appearance since 1974. Creighton is making its second appearance in the Paradise Jam after winning the tournament title in 2016.

SIU returns all five starters off last season's 12-14 squad that finished 5-13 in the Missouri Valley Conference (ninth place). Leading scorer Marcus Domask, a 6-6 forward who was the MVC Freshman and Newcomer of the Year in 2020, missed all but 10 games with a left foot injury. Sophomore guard Lance Jones (13.4 ppg., 73 assists, 35 steals) was a third team all-conference pick, and center Kyler Filewich (6.8 ppg., 5.8 rpg.) was an All-Freshman Team pick. The Salukis added three all-state selections, all incoming freshmen, and graduate transfer Ben Coupet Jr. from Little Rock.

Nov. 19-22, University of the Virgin Islands Sports and Fitness Center

All games scheduled to air on ESPN3 or ESPN+

Bracket for the 2021 Paradise Jam in the U.S. Virgin Islands.

This Week in Saluki Athletics

CARBONDALE — The SIU baseball team returns home for a big series, and the softball team jets off to Arizona in an even bigger one this week.

SEE THE MAP: These businesses on Carbondale's west side are on the move

SIU guard Lance Jones (5) finds his way to the basket blocked by Valparaiso forward Ben Krikke (23), guard Sheldon Edwards (13) and guard Eron Gordon (10) during the second half at the Banterra Center on Feb. 22 in Carbondale. The Salukis went on to win 67-64.

USC guard Tahj Eaddy (2) and Colorado guard Eli Parquet (24) go at it in Boulder in February in this file photo. Parquet and the Buffaloes take on SIU in the first round of the Paradise Jam in November.