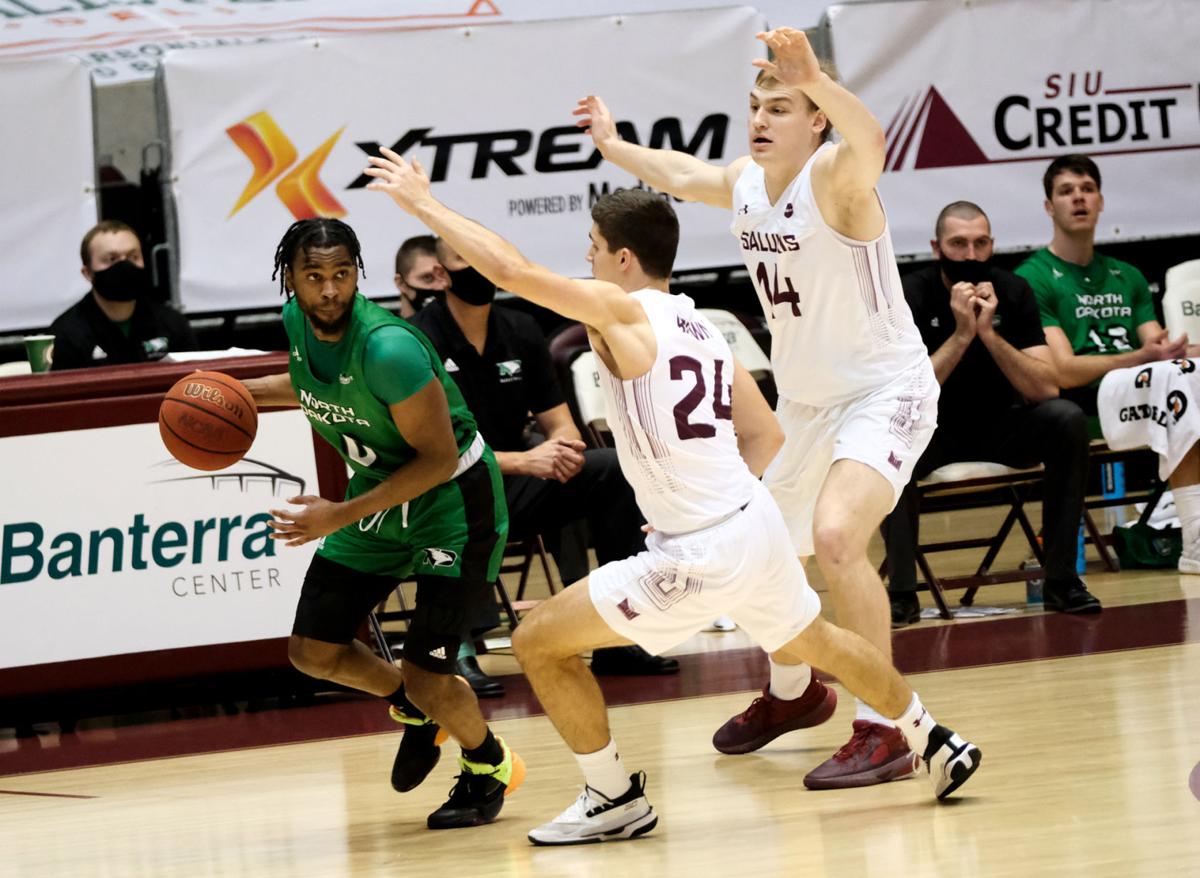 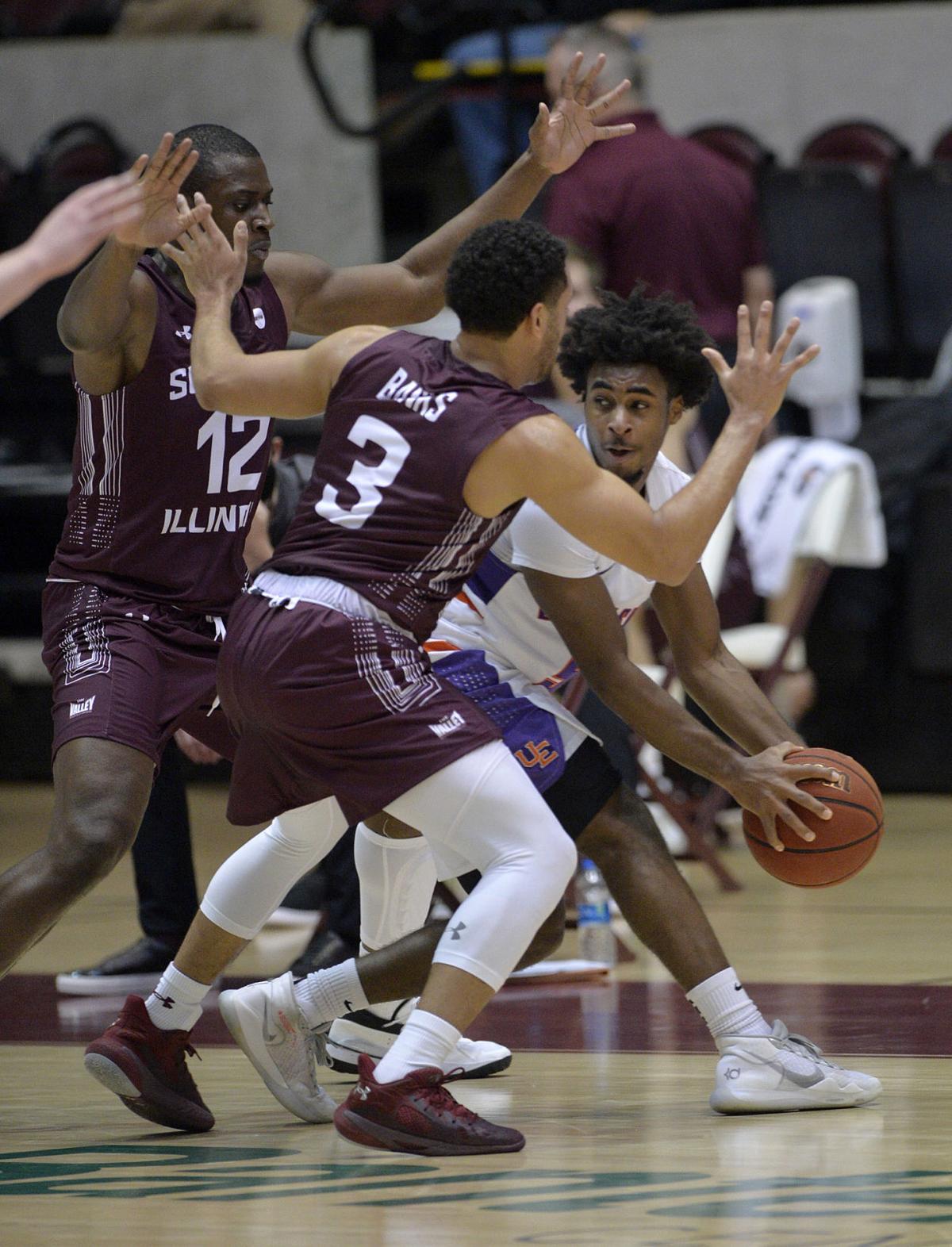 SIU forward Sekou Dembele (12) and SIU guard Dalton Banks (3) trap Evansville guard Shamar Givance (5) during the first half at the Banterra Center on Monday in Carbondale.

Undefeated Drake (13-0, 4-0 Missouri Valley Conference) missed only six shots in the second half against the Salukis on Monday, converting 18 of 24 from the field. The Bulldogs sank 34 of 57 (59.6%) for the game at the Knapp Center in Monday's 86-55 win over SIU (7-3, 1-3). It was the most points allowed by the Salukis since coach Bryan Mullins took over last season, and the biggest margin of victory in the last two years.

"I felt like we were ready. We had good energy before the game, but they came out, went on a run, and we just never fought back from it," said SIU forward Marcus Domask, who had a team-high 13 points. "We never answered them back."

Backup point guard Joseph Yesufu led Drake with 16 points off the bench Monday. The Bulldogs, who received votes in The Associated Press and coaches polls Monday, extended their school-record start with 21 points off SIU's 14 turnovers. They doubled up the Salukis in the paint, 44-22, and became the first team in the country to 13 victories.

SIU allowed 73 points at Butler, but put up 76 to pick up one of the biggest wins of anyone in the MVC earlier this season. The Salukis held Evansville to 57 points, its second-lowest total of the season, and 38.8% shooting, in another tight win (63-57). The Purple Aces needed a school record-tying 17 3-pointers the next day to end SIU's undefeated season, and begin what has become a three-game winning streak.

Against a veteran team like Drake, which started two seniors and three juniors, a good defensive effort wasn't enough. The Bulldogs cleared 80 points for the ninth time this season on Monday, after handing SIU its biggest loss of the season Sunday night, 73-55.

The Salukis led the MVC in scoring defense last season, but also had three seniors/graduate transfers in their starting lineup (Eric McGill, Ronnie Suggs and center Barret Benson). This year, although SIU is deeper, it's younger than ever, with four sophomore starters and one graduate transfer, forward Anthony D'Avanzo, who came from a Division II school. The Salukis only have five days to get ready for another road series, this time at Indiana State (3-6, 0-4), which will be desperate not to start out 0-6 in the league race.

"I gotta make sure the team is more organized, and everybody's on the same page. We just gotta be more connected," Mullins said. "We gotta play with a greater sense of urgency. I think it's the mentality that we gotta have, and at times, we've shown it. We've been able to win games this year with our defense this year when our offense wasn't there. I think these last couple games, we've taken a step back, defensively, and we don't have a chance to compete at Indiana State if we don't play well, defensively."

69.3 — Points allowed per game this season by SIU, 5th-best in the MVC

SIU athletic director Liz Jarnigan is still hopeful fans will be able to see this season's team, Drake's experience, and how the Missouri Vall…

SIU at Drake: 3 things to watch

Drake is off to its best start ever, and SIU's men's basketball team is coming off its first loss of the season.

Saluki Basketball 5@5: Mullins gets his wish, and an update on some pro players

Bryan Mullins gets his wish, and an update on some pro players, in today's Saluki Basketball 5@5.

Salukis' 2020 not without high points, but challenges remain

Saluki Basketball 5@5: Looking for the sweep, SIU's youth movement and Meriweather's big game off the glass

In today's Saluki Basketball 5@5, the momentum of SIU's recent series with Indiana State, the youth movement in Carbondale, and your Throwback…

Saluki Basketball 5@5: Black Out Cancer jerseys up for bids, and UNI-Loyola hits the big time

Get your Black Out Cancer jerseys now, Northern Iowa-Loyola hits the big time, and a former SIU assistant coach will lead an NBA G League team…

The SIU men's basketball team lost its fifth straight game late Friday night, when the Missouri Valley Conference announced the Salukis' game at Missouri State scheduled for Thursday would be rescheduled for Feb. 10 because of COVID-19 protocols.

MVC Notebook: Mullins optimistic Salukis could get back Monday night

Working the 5-on-0 fast break might be SIU's only option this week, but Saluki coach Bryan Mullins is optimistic his team will be back in acti…

Valley coaches talk about leading comfortably, SIU recruit Troy D'Amico is honored, and a look at Wednesday's schedule, all in today's Saluki …

SIU forward Sekou Dembele (12) and SIU guard Dalton Banks (3) trap Evansville guard Shamar Givance (5) during the first half at the Banterra Center on Monday in Carbondale.