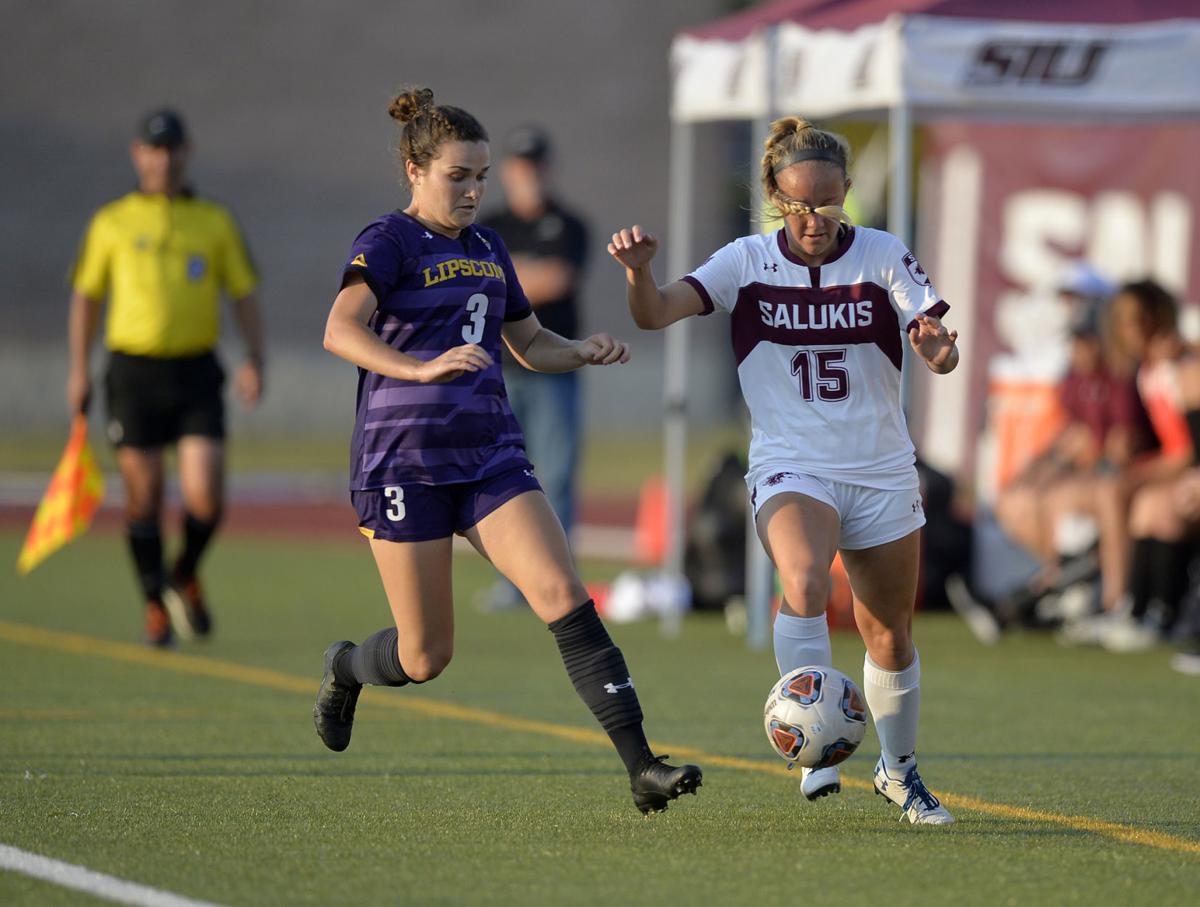 SIU defender Katy Quinn (15) dribbles the ball upfield as Lipscomb midfielder Cami Rogers (3) defends during the first half at Saluki Field at the Lew Hartzog Track and Field Complex last season in Carbondale. 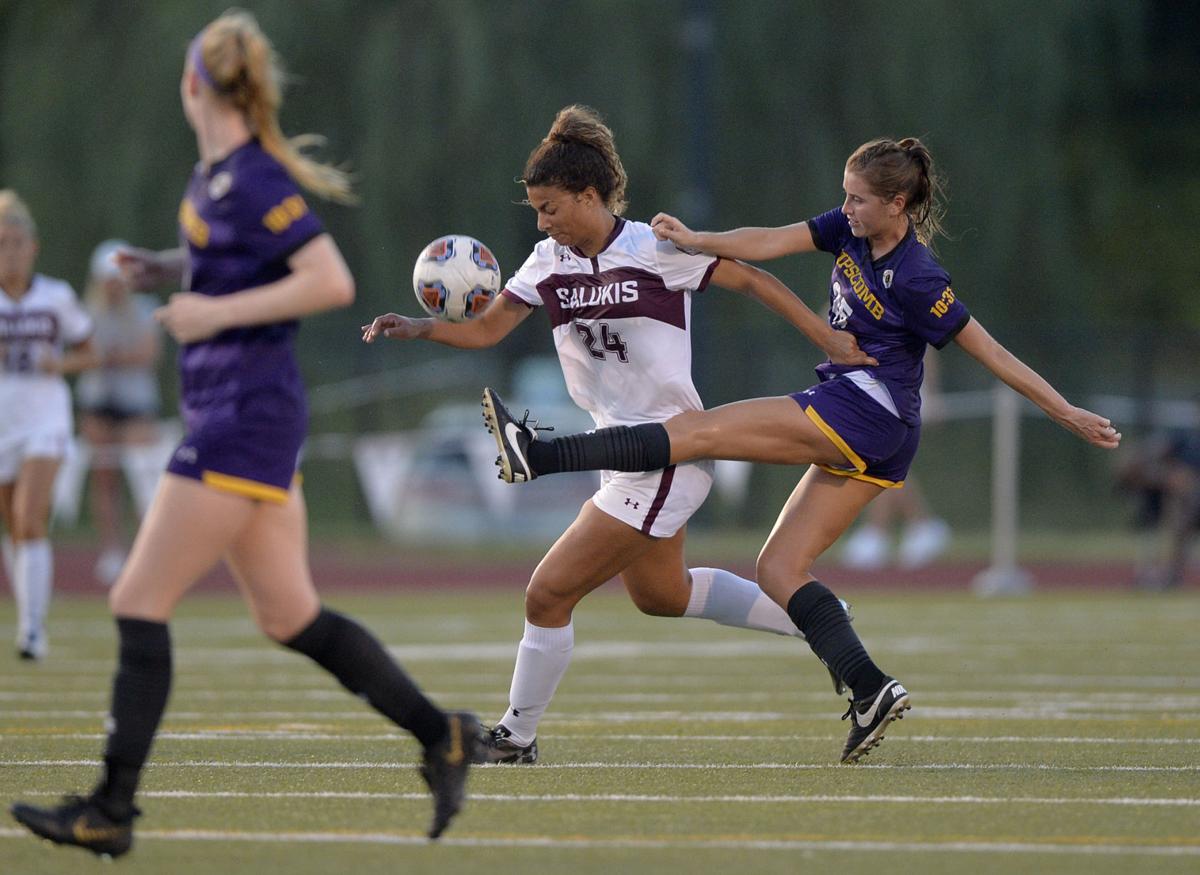 Lipscomb defender Kaitly Echols (25) plays the ball away from SIU defender Maya Warrior (24) during the first half at Saluki Field at the Lew Hartzog Track and Field Complex last season in Carbondale.

More than a year later, the Salukis have some new blood to lead them into their second campaign. Leading scorer Liz Brechtel, a sophomore forward who scored six goals in 2019, will miss the spring season with a torn ACL. Coach Grant Williams has two upperclassman captains, senior defender Kathryn Creedon and junior midfielder/defender Ellie Lewis, and three players who did not compete for the team in its first year poised to have a big year.

"Hailey Blanchard, who didn't feature for us at all last year, she was nursing an injury that she suffered while still at Mizzou in the spring there, will be in our lineup from the get-go this year," Williams said. "You lose one, you have the opportunity for someone else to step in. Same thing goes for Georgina Franco and Alyssa Fallon, two players who we anticipated playing some significant minutes last year in the back for us. Both of those players are now healthy and will be seeing their first action this spring."

SIU opens its first spring season Wednesday at Saint Louis, and is scheduled to open its first Missouri Valley Conference slate Feb. 28 at home against Valparaiso. The Salukis host Western Kentucky Feb. 20, and then begin an eight-match Valley schedule the following weekend, if things go well. COVID-19 pushed their fall 2020 schedule to this spring, and has a fall 2021 schedule on the horizon.

Creedon and Lewis both started somewhere else, at UMBC and Murray State, respectively. Blanchard, a 5-foot-8 forward, played 19 matches with the Tigers as a freshman in 2018. Franco, a 5-6 defender from California, led Patrick Henry High School in points as a junior. Fallon, a 5-7 midfielder/defender from Las Vegas, is set to make her Saluki debut.

Even without Brechtel, SIU still returns three of its top-five scorers from its first season. Sophomore forward Emma Spotak scored two goals and had one assist as a true freshman. Creedon scored one goal on nine shots in 2019, and sophomore forward Madison Meiring had one goal and one assist in 17 matches. The Salukis return their top-two goalkeepers from their first year, sophomores Dariana Mihalache and Maddy Alaluf, but are going with another sophomore, Nicole Raventos, in goal Wednesday.

Raventos competed in two matches in 2019.

Williams, a former assistant coach at Evansville, believes SIU has enough talent to compete in the Valley. The preseason poll has not been released yet, but Williams believes the young squad can finish in the top six and qualify for the postseason tournament in its first year in the league.

The SIU volleyball team closes one series and returns home to start another this weekend, and the baseball, football and women's soccer team i…

Salukis' 2020 not without high points, but challenges remain

CARBONDALE — The SIU women's soccer program will open its first season in the Missouri Valley Conference on Feb. 28 at home against Valparaiso…

Q and A with SIU SAAC President Kailyn Stone

CARBONDALE — Kailyn Stone, a junior on the SIU women's soccer team and the swimming and diving team, serves as the 2020-21 Student-Athlete Adv…

SIU defender Katy Quinn (15) dribbles the ball upfield as Lipscomb midfielder Cami Rogers (3) defends during the first half at Saluki Field at the Lew Hartzog Track and Field Complex last season in Carbondale.

Lipscomb defender Kaitly Echols (25) plays the ball away from SIU defender Maya Warrior (24) during the first half at Saluki Field at the Lew Hartzog Track and Field Complex last season in Carbondale.