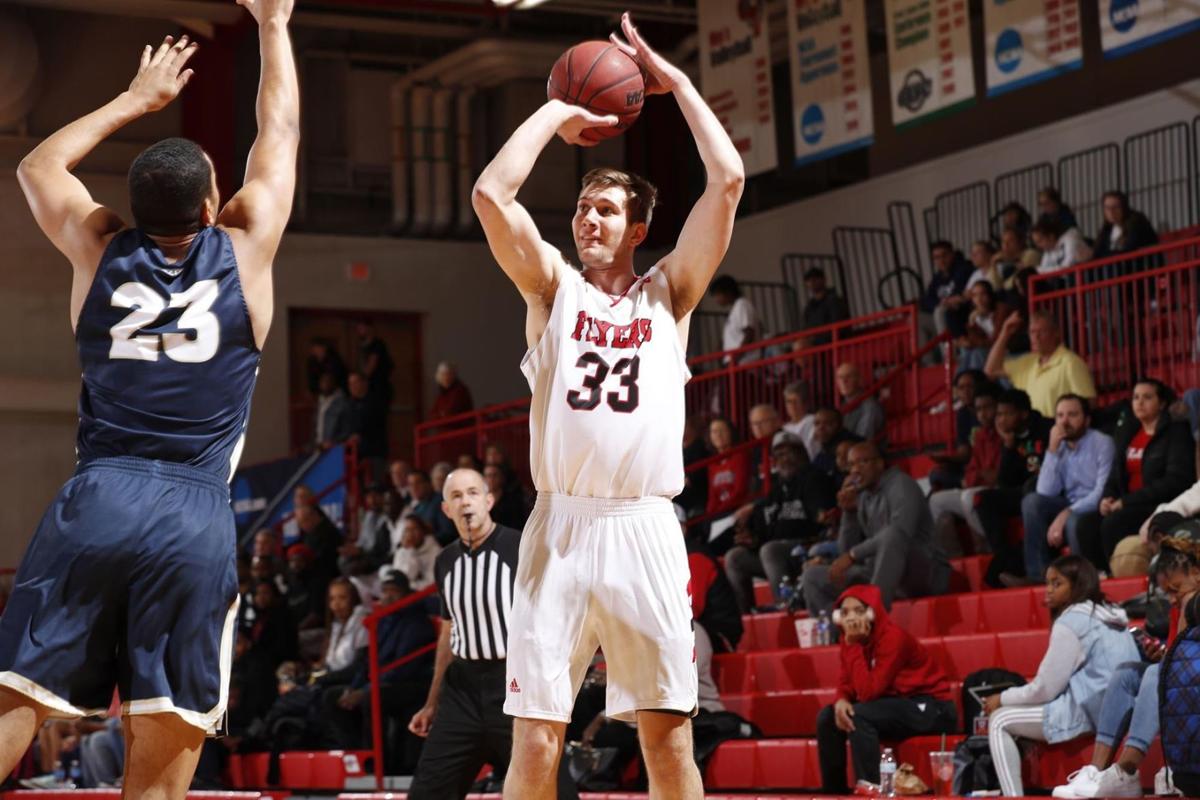 Lewis University forward Anthony D'Avanzo fires during the 2019-20 season. D'Avanzo, a 6-foot-8, 205-pound junior for the Division II Flyers, verbally committed to SIU's men's basketball team Sunday. He is expected to be eligible as a graduate transfer this upcoming season.

Valparaiso's men's basketball team made it all the way to the finals of the Missouri Valley Conference Tournament in March with one true big, 6-foot-8 forward Mileek McMillan.

The Crusaders tied for sixth place with Missouri State during the regular season, dropping into the opening rounds of the tournament, but were tough to guard with, essentially, four guards. McMillan had as many points (three) in the championship game loss to Bradley as assists, rebounds and 3-point attempts. SIU's starting 5-man may also have as many rebounds as 3-point attempts in some games this season, because the pressure is on the Salukis' new bigs after forward J.D. Muila was lost for the season to a knee injury.

The team was optimistic it would only lose Muila, a 6-8 junior from Indian Hills (Iowa) Community College, for about two months after its medical team diagnosed his torn meniscus. But after the surgery, the team was informed it was a bit more serious than first thought, and Muila's rehab could last more than six months. Muila was SIU's first signee in the spring class because he's physical, he plays hard, and he can board, to the tune of 6.8 per game last season for a 30-win club.

Rebounding cost SIU several games last season, including the most important one, a 64-59 loss to Bradley at the Valley Tournament in which the Braves scored six second-chance points and outrebounded the Salukis by 14. SIU got beat by 24 boards in a nine-point loss to Oakland, by 12 in a nine-point road loss at Saint Louis, and by 11 in a two-point loss to Bradley at home. The Salukis' rebounding margin, minus-5.5 per game last season, was the worst in the Valley and ranked 334th out of 350 Division I teams.

Muila was not going to reverse those numbers by himself, but was going to help. Now SIU will lean heavily on 6-9 forward Kyler Filewich, a 250-pound freshman from Canada that averaged 9.9 boards a game for an undefeated team last season. The Salukis also have Anthony D'Avanzo, an interesting 6-8 forward from Division II Lewis University that may be more like Loyola's Tate Hall than Muila, Filewich or 6-7 sophomore Sekou Dembele. D'Avanzo shot nearly 40% from the 3-point line last season and was Lewis' leading scorer and rebounder.

SIU was considering playing Muila with D'Avanzo as a wing/fourth guard. More teams in the MVC are playing small, and, outside of taking on Louisville later this month, which has three guys 6-10 or bigger, the Salukis may play D'Avanzo with four guards.

• Condolences to Pancoast's family: My condolences go out to the family of former Saluki quarterback Brad Pancoast, a former Mount Vernon High School football coach and a member of the Shelbyville High School Hall of Fame, who died Oct. 26. Pancoast started two years for SIU, in 1970 and 1971, and was an honorable mention All-American in 1970.

Pancoast coached football for 30 years, including 16 years with the Rams (1977-90, 1998-2000). Mount Vernon went 92-66 under Pancoast with four playoff appearances. He was a four-sport athlete at Shelbyville, competing in football, basketball, golf and baseball.

A three-time MVC honoree, the 6-9 Krutwig was a first team pick the last two years. One of the most versatile big men in the Midwest, Krutwig averaged 15.1 points, 8.1 rebounds, 4.2 assists and 1.2 steals per game last season for the 21-11 Ramblers. He was the first player in league history to finish in the top five in the Valley in scoring, rebounding, assists and field goal percentage (56.3%).

Missouri State's men's basketball team was turned away hours from its season opener Friday because of positive tests. SIU's opener is set for …

CARBONDALE — SIU forward J.D. Muila will miss the entire 2020-21 season after undergoing surgery Tuesday to repair a torn meniscus, the team a…

CARBONDALE — SIU's men's basketball team might feel a bit out of place at the nine-team Louisville bubble event later this month.

Salukis to take on Cardinals, Prairie View A&M and Winthrop in Louisville

CARBONDALE — SIU's men's basketball team doesn't know when, or where, it will end the 2020-21 season, but now it knows where it'll start.

Lewis University forward Anthony D'Avanzo fires during the 2019-20 season. D'Avanzo, a 6-foot-8, 205-pound junior for the Division II Flyers, verbally committed to SIU's men's basketball team Sunday. He is expected to be eligible as a graduate transfer this upcoming season.