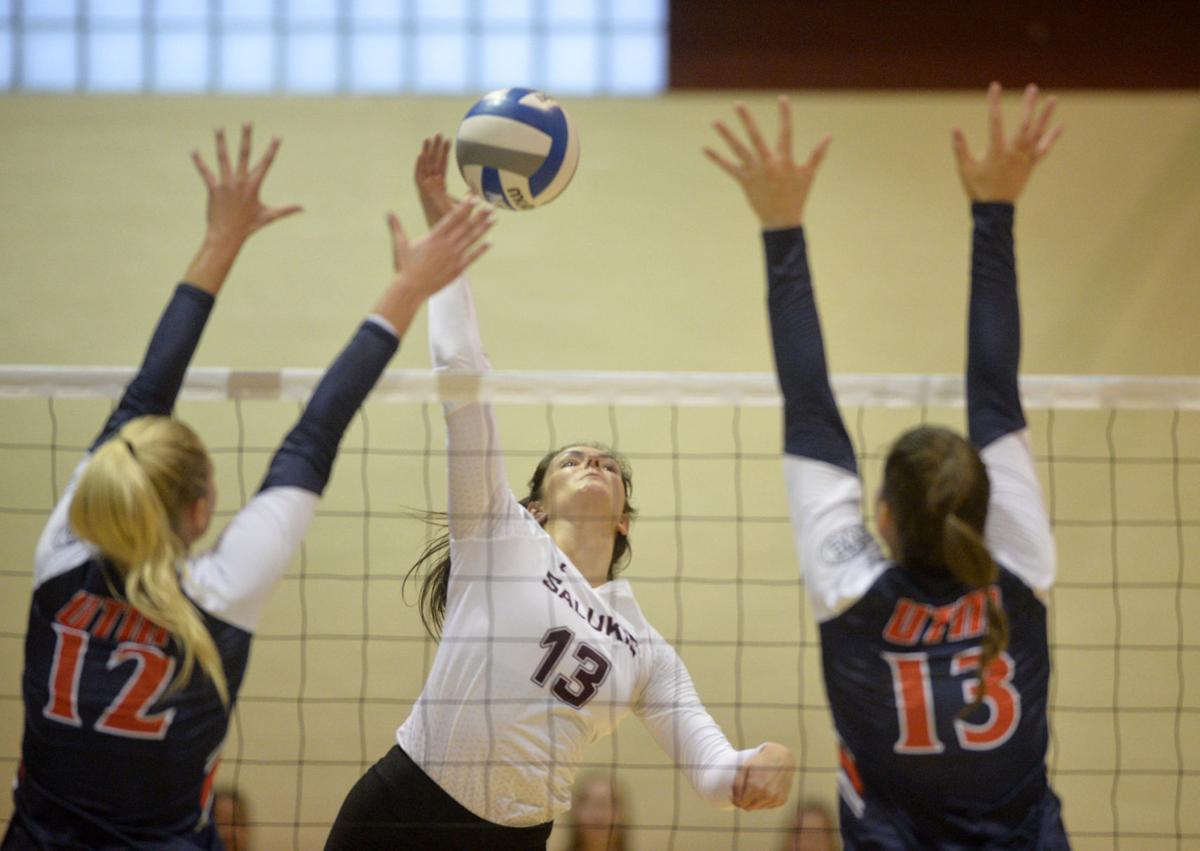 SIU setter Rachel Maguire (13) hits past the block by UT Martin’s Jessica Reynolds (12) and Justine Walker (13) during the first set of a match at Davies Gym in Carbondale on Sept. 17, 2019. The Saluki volleyball team's 2020 schedule was reduced to conference-only matches Monday, when the Missouri Valley Conference announced it was pushing back all fall competitions to at least Sept. 18. 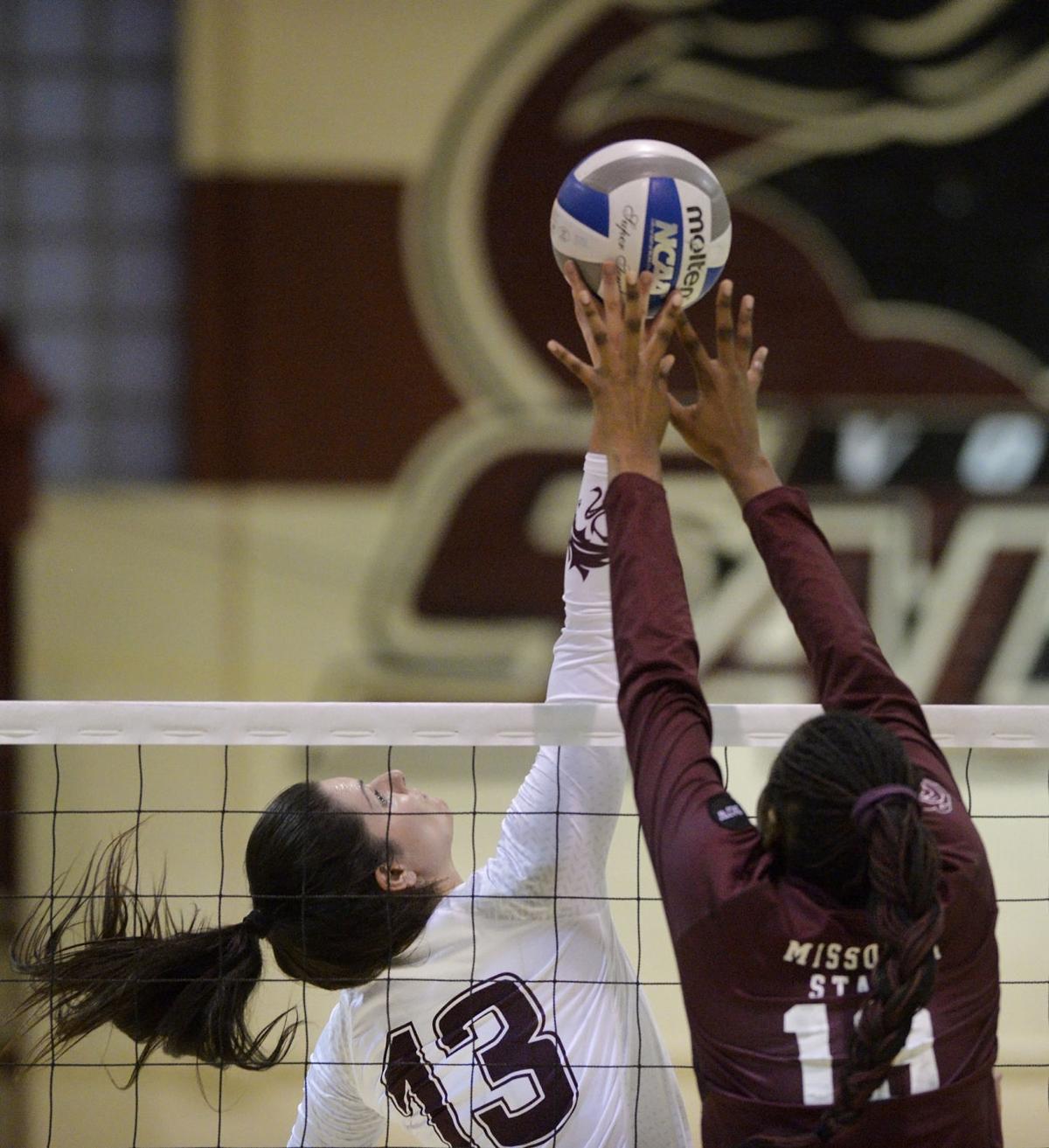 The 6-foot senior from Bloomington played in all 134 sets last season for the Salukis, who went the distance a school-record 12 times in 32 matches. Only fellow setter Alayna Martin played in every set for SIU in 2019, and while Martin led the team in assists (722) and was second in digs (388), Maguire led the nation in triple-doubles.

Her 13 triple-doubles broke SIU's single-season and career records. Nobody else in Division I had more than eight.

"As a team, we just did so well and we flowed so well, it allowed me to do that," Maguire said. "Obviously, the pass and the set had to be there for me to hit. For an assist, the pass had to be there for me to set it. It was nice to kind of combine the skills that I've always done playing, club I was a setter and a right side (hitter). The first two years of college I was just a setter, and the second one I was just a hitter, so it was kind of nice combining the two. All the years leading up kind of made it happen."

In some ways, SIU was better on defense than on offense. Seniors Savannah Sheridan and Maguire both had more than 300 kills, but neither hit over .170 for the year. Without enough killers on the outside, the Salukis struggled to put away balls, but were good enough to keep a lot of them alive. They won seven of their 12 five-set matches.

"The positive to all that, not only are you getting that because maybe you're not putting as many first-balls away, but the other side of that is you're managing balls pretty well," SIU coach Ed Allen said. "You can't commit hitting errors and come up with those, either."

Without a fall season, SIU is practicing to prepare for a spring schedule. Instead of getting ready for matches, the Salukis are working out in two groups, returners and newcomers, about an hour a day. They return their top-four hitters from last season's 14-18 squad that finished eighth in the Missouri Valley Conference. Maguire, a second team all-conference pick last season, and Sheridan are two of five seniors. Junior Hannah Becker, a 6-2 outside hitter, was also selected second team all-conference after a breakout year.

Allen is high on freshmen Imani Hartfield from Florida and Tatum Tornatta, an Evansville, Indiana native, to help the team score a little quicker.

"Maybe we didn't have the offensive potency to shrink those numbers, but at the same time, at least we were consistent enough where those numbers could grow," Allen said. "I need to score a point. It doesn't matter if it's the first rally or the fifth. You gotta be able to win it."

Maguire, 21, will lead the charge as the team's starting setter. A biological sciences major, she is thinking about grad school or medical school, but is opting in to the spring before walking away from the court for the last time. All of her classes are online, so it's pretty much class, volleyball and sleep during the week. Quarantine has made her appreciate all of it.

"It really does make you think you have to really appreciate what's going on with your life," she said. "There's so many ways it could be worse. I'm very grateful for all that I have now, and that was one outcome of this whole quarantine, and that I should take advantage of what I'm given. You never know what's gonna happen."

CARBONDALE — The Missouri Valley Conference recently announced that the non-conference portion of the 2020 fall season for cross country, socc…

CARBONDALE — You can never have too many good outside hitters. SIU volleyball coach Ed Allen learned that the hard way in his first season las…

SIU setter Rachel Maguire (13) hits past the block by UT Martin’s Jessica Reynolds (12) and Justine Walker (13) during the first set of a match at Davies Gym in Carbondale on Sept. 17, 2019. The Saluki volleyball team's 2020 schedule was reduced to conference-only matches Monday, when the Missouri Valley Conference announced it was pushing back all fall competitions to at least Sept. 18.