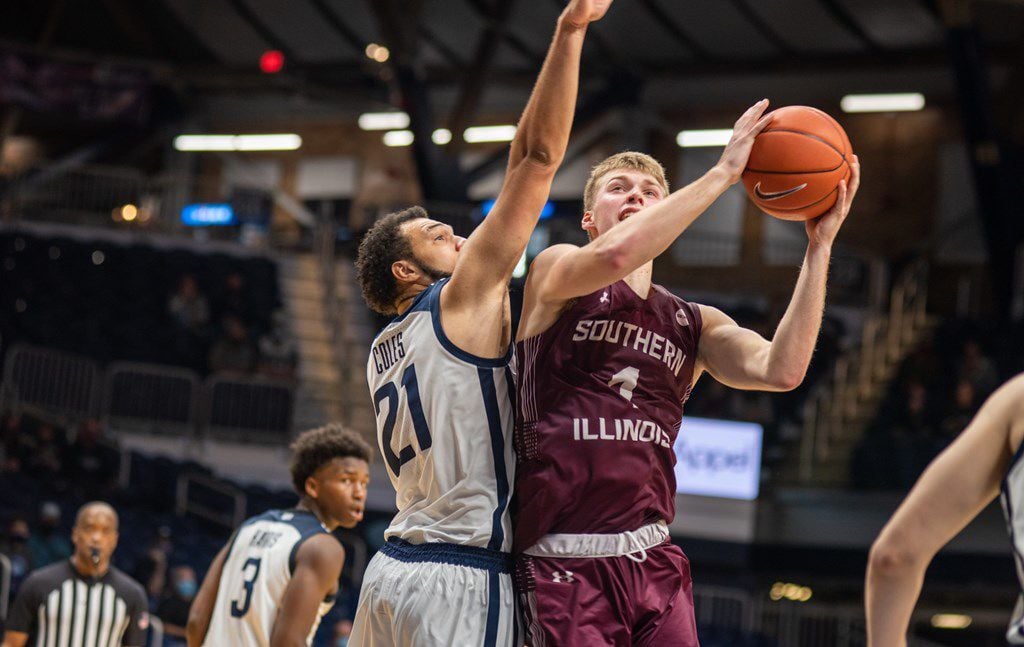 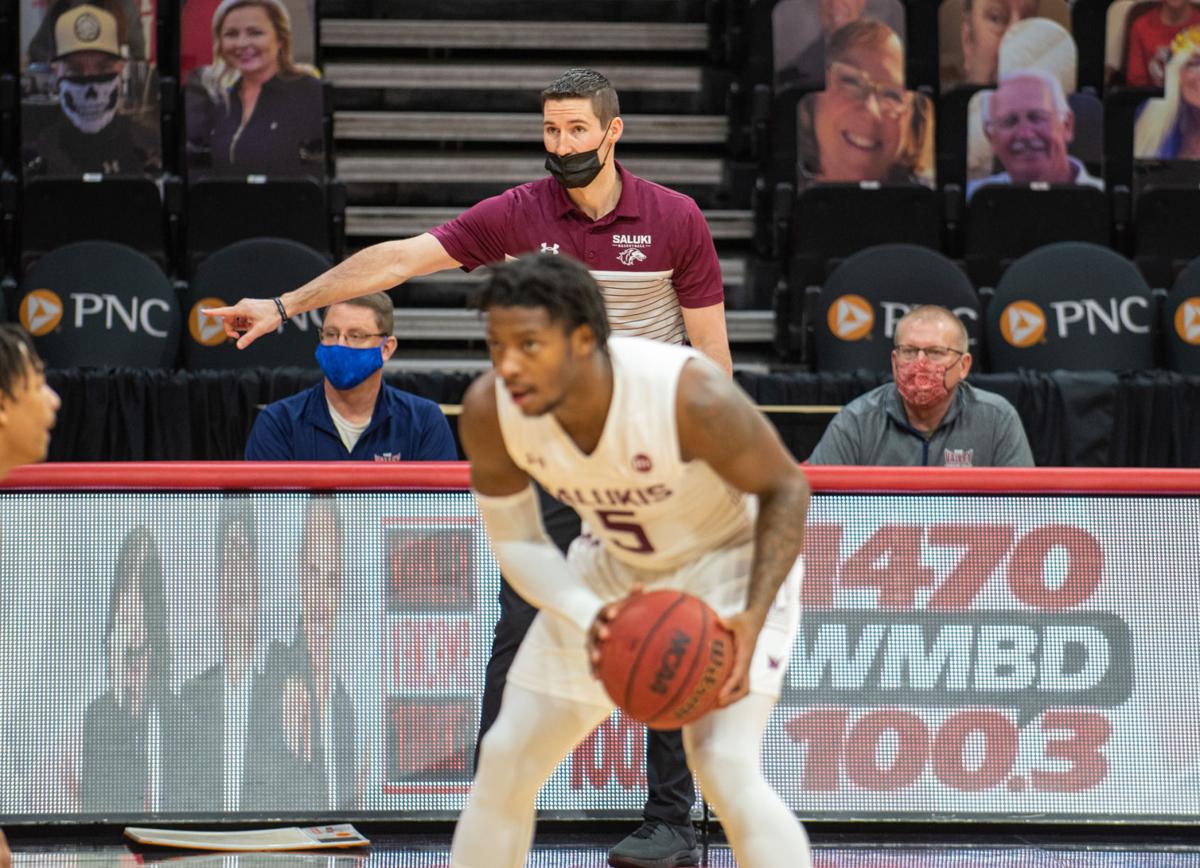 SIU guard Lance Jones looks for room to dribble against Bradley on Feb. 8 in Peoria, as coach Bryan Mullins looks on. Jones hit a free throw with 2.3 seconds left to lift the Salukis to a 69-68 victory at Carver Arena. 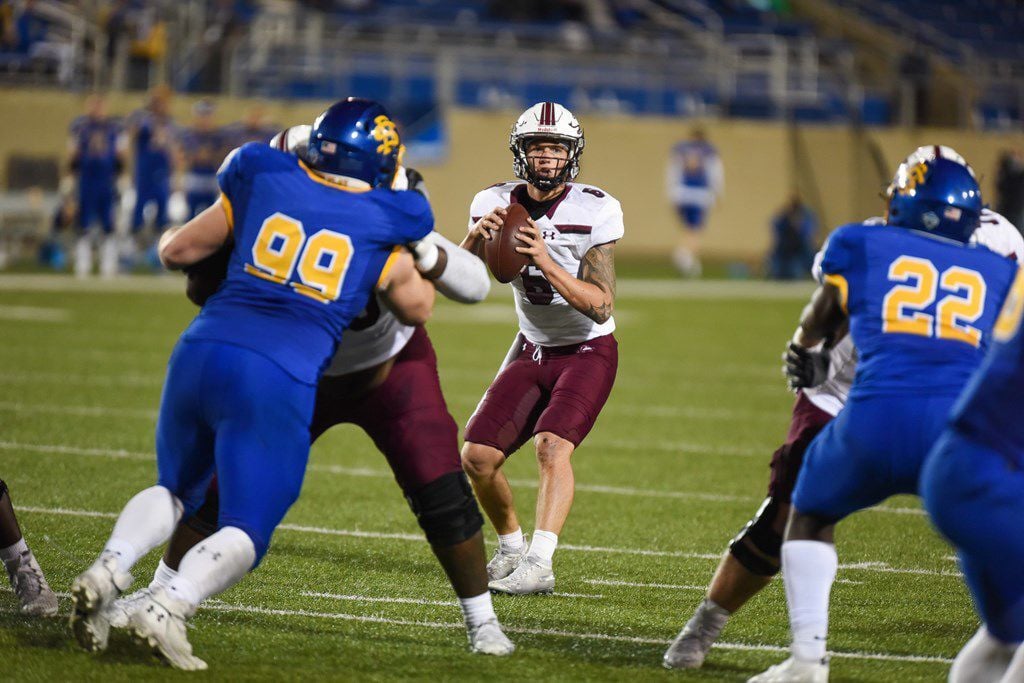 SIU quarterback Stone Labanowitz looks for a place to throw the football on May 3 at South Dakota State. Labanowitz threw for 247 yards and a touchdown in the Salukis' 31-26 loss at Dykhouse Stadium in Brookings, S.D. 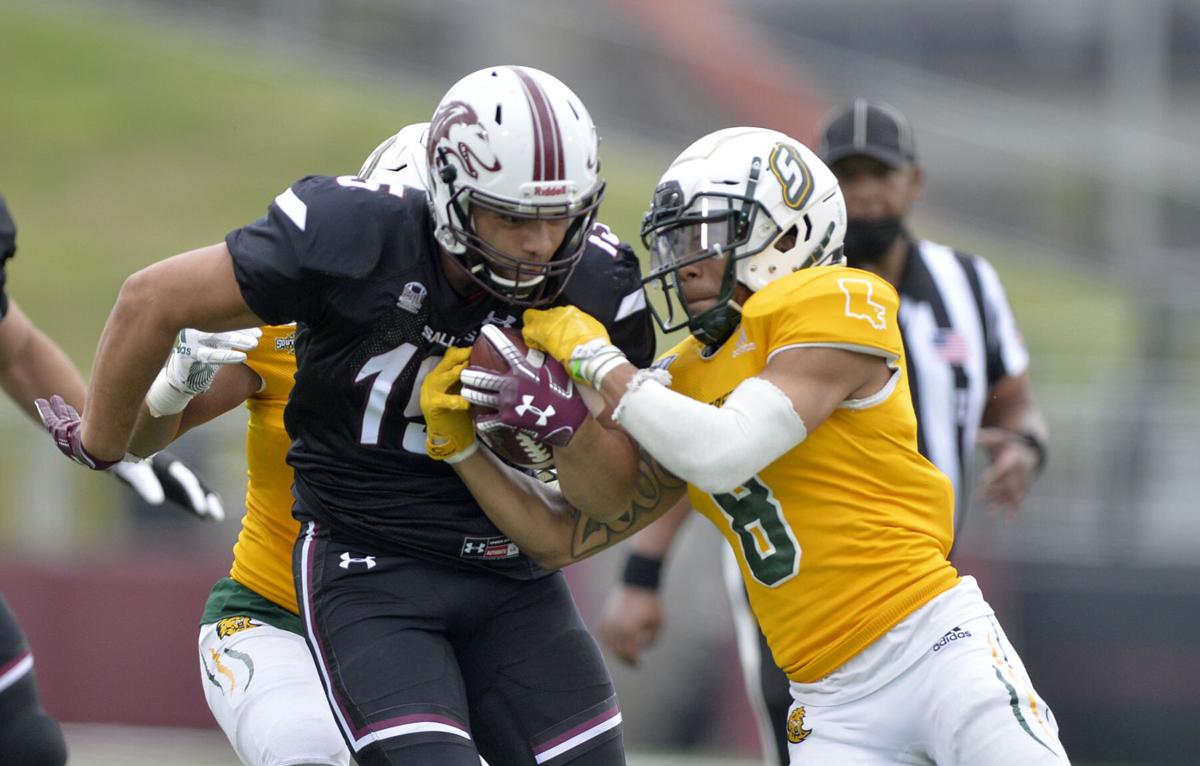 SIU running back Javon Williams Jr. (15) powers through the tackle by Southeastern Louisiana defensive back Donniel Ward-Magee (8) during the fourth quarter at Saluki Stadium this season in Carbondale. The Salukis went on to win 55-48.

One of my last years in college, the University of Iowa held a rummage sale at Kinnick Stadium that included old jerseys, practice jerseys, Hawkeye sweatshirts, shoes and even some used sports equipment.

Sorting through hundreds of shirts in piles thrown around a few tables, I came across what I was looking for. It had these hideous three gold stripes at the top, originally considered wings, I guess, but the black football jersey with the No. 6 was in strikingly good shape. Was it a game-worn jersey? Somebody else's No. 6? Or was it one of the great Tim Dwight's old jerseys from his days at Iowa? It was hard to tell without the last name on it.

Dwight, who returned a kickoff 94 yards for a touchdown in the Super Bowl in 1999 with Atlanta, was a special player. The two-time All-American was the fastest man I've ever seen in going from a dead stop to full speed. A former state champion sprinter at City High School in Iowa City, he could literally go from catching the kickoff to full speed in about four steps. He played 10 years in the NFL, but when I found his jersey I was only thinking of his Iowa days.

Beginning this fall, or possibly even next month, you may be able to find a Marcus Domask jersey at a Saluki Team Store with his name on the back. You may see car commercials with Lance Jones, Javon Williams Jr. or Stone Labanowitz, all of which I look forward to. Why? Because even though the NCAA hasn't passed its regulations for players' name, image and likeness yet (it's expected soon), most states have already passed laws that will allow Division I athletes, and players at other levels, to profit off their reputations beginning July 1. There is a bill sitting on Gov. J.B. Pritzker's desk right now in Illinois that was passed June 1 that could give every athlete in this state the ability to appear in commercials, endorse products, and make some money off their schools selling their jerseys.

The NLI stuff is long overdue. If schools could sell jerseys with popular players' numbers on them, they should have been required to give those players a share. I don't know how athletes will find the time to do commercials or endorse products, but they should be able to as long as they're not too controversial. The Illinois bill sent to Pritzker prohibits college athletes from promoting sports betting, alcoholic products, tobacco products, vaping, adult entertainment or any other product inconsistent with the "values of a postsecondary institution" or would cause their schools embarrassment.

Who will decide that? It'll be like pornography. You may not be able to describe it, but you will know it when you see it.

Schools are scrambling to figure out how to monitor what their athletes want to endorse, approve and disapprove requests, and find a way to give athletes from non-revenue sports, like men's and women's golf, the same opportunities as basketball, football and volleyball players. Some schools in the Valley will benefit from this move more than others. Loyola, for example, has the Chicago market to connect to. Missouri State has the second-biggest city in the league, Springfield, Missouri, with more than 450,000 people in the area, and Illinois State sits among some of the biggest companies in the country. Will Vogler Ford want Domask to endorse its dealership in a commercial? Cook's Portable Warehouses? McAlister's Deli? Harbaugh's Cafe?

Could Labanowitz make a tiny fortune endorsing tombstone manufacturers and masons in Southern Illinois? Yes. With his personality and success, yes he could. So start saving for those jerseys. They may be worth a lot more when the players are gone.

While way overdue, by passing new laws allowing college athletes to profit off their name, image and likeness, the NCAA and state of Illinois …

SIU's biggest opponent Wednesday night started out beyond the outfield walls, more than 500 fans came to The Itch under the lights, and a seni…

Danielle Lawrie-Locke went to the 2008 Olympics with Team Canada, has two silver medals from the Pan American Games, and won two National Pro …

Sports Column | Todd Hefferman: Jenkins back to where she started

SIU guard Lance Jones looks for room to dribble against Bradley on Feb. 8 in Peoria, as coach Bryan Mullins looks on. Jones hit a free throw with 2.3 seconds left to lift the Salukis to a 69-68 victory at Carver Arena.

SIU quarterback Stone Labanowitz looks for a place to throw the football on May 3 at South Dakota State. Labanowitz threw for 247 yards and a touchdown in the Salukis' 31-26 loss at Dykhouse Stadium in Brookings, S.D.

SIU running back Javon Williams Jr. (15) powers through the tackle by Southeastern Louisiana defensive back Donniel Ward-Magee (8) during the fourth quarter at Saluki Stadium this season in Carbondale. The Salukis went on to win 55-48.