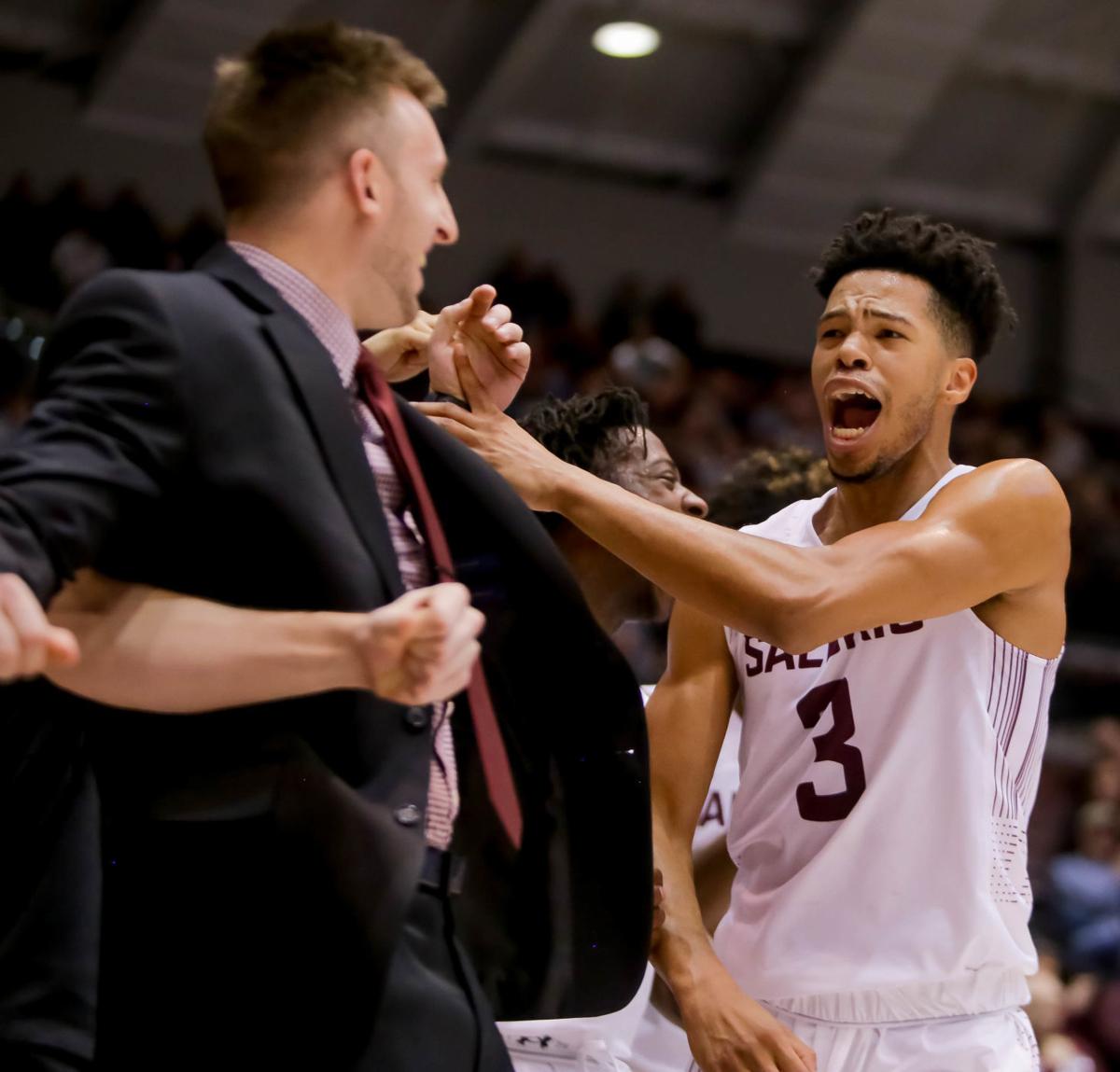 Southern Illinois Salukis guard Ronnie Suggs (3) reacts to a three-point shot on Saturday during the second half of a game against the Southeast Missouri State Redhawks at the Banterra Center in Carbondale. 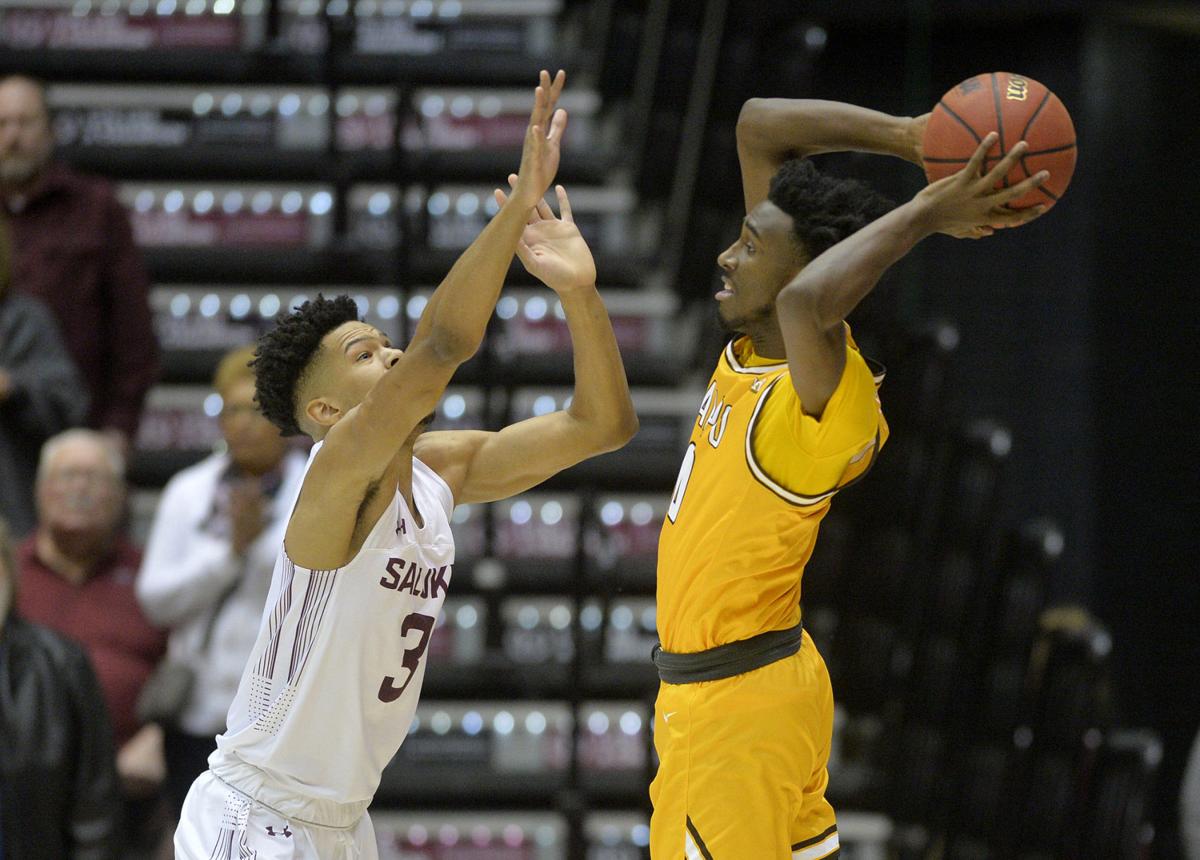 SIU guard Ronnie Suggs (3) pressures Valparaiso guard Javon Freeman-Liberty (0) during the first half at the Banterra Center on Tuesday in Carbondale. 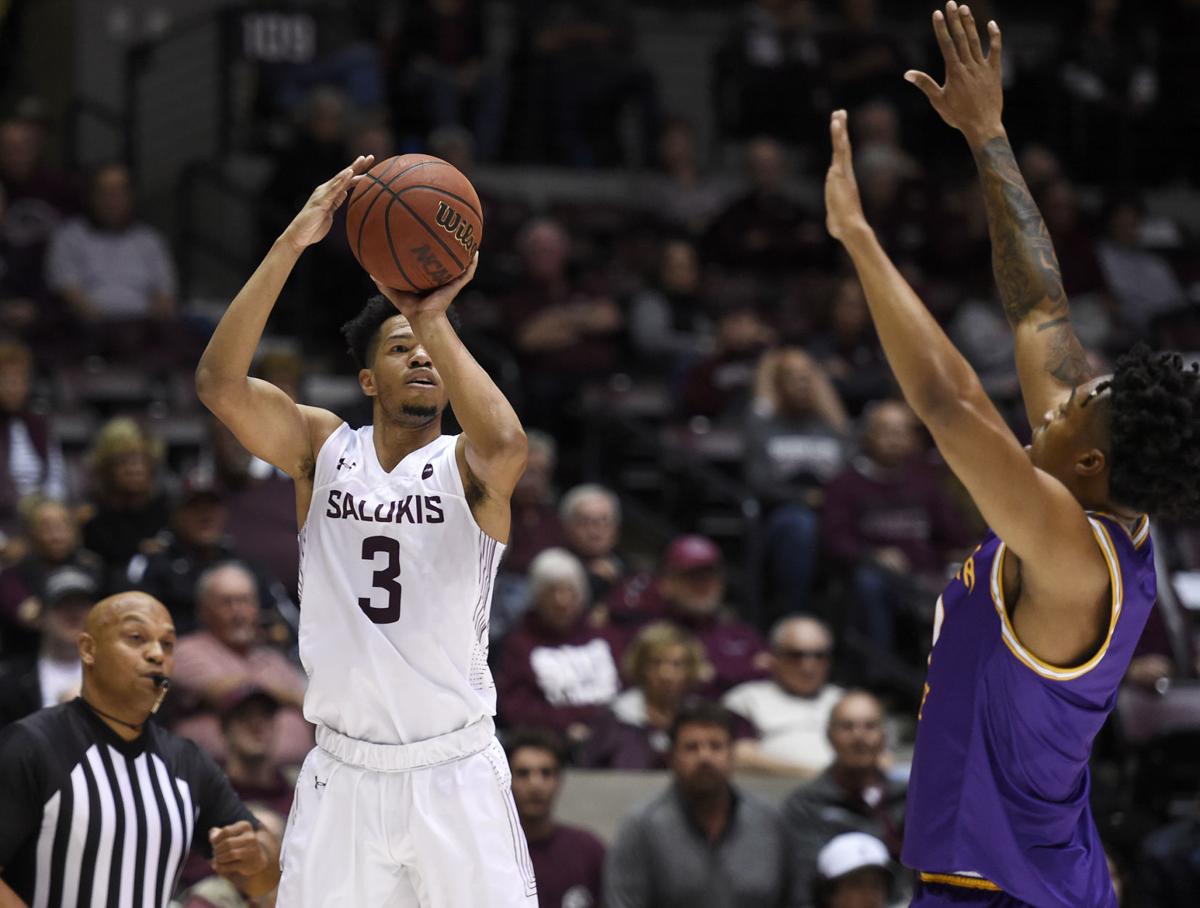 SIU guard Ronnie Suggs (3) shoots over Minnesota State guard Jamal Nixon (1) during the first half of an exhibition game at the Banterra Center this season in Carbondale.

A 6-foot-6 guard out of Vermont Academy, Ronnie Suggs was recruited by some of the best private schools in the Midwest.

Xavier. DePaul. Fairfield and New Hampshire, because of his East Coast exposure. Bradley coach Brian Wardle had the best offer, Suggs said, because it was a chance to step in to a lineup that was losing a lot of seniors.

Suggs was the Braves' third-leading scorer as a true freshman (8.5 points per game) and played well in some big games. He scored a career-high 17 points in a loss at No. 10 Arizona in 2015, one of 13 double-figure scoring games. Ten of those 13 came during Missouri Valley Conference play, but Bradley won only five games in Wardle's first season.

His sophomore year, his playing time went down from more than 30 minutes a game to less than seven, and he only got into half the games. The St. Louis native decided to transfer and walked on to Missouri. He had to sit out for one season but played in 27 games last season for the 15-17 Tigers. Mainly a defensive stopper for Missouri, he scored 13 points against fourth-ranked Kentucky and learned how to use his length against some of the best players in the country.

Missouri coach Cuonzo Martin put Suggs on scholarship last spring, but after the season he went looking for an opportunity to play more. With several newcomers, SIU coach Bryan Mullins was looking for some immediate experience to give seniors Aaron Cook and Eric McGill a chance to try to make the postseason, and asked Suggs to come back to the Valley. His defense, and his attitude, have been invaluable for one of the youngest teams in the league.

"I think we can take any game. We gotta come with the mindset that each game is ours, no matter what, but we also just gotta focus," Suggs said. "Even at away games, we usually have a decent crowd, but it's not the same atmosphere as the home games."

Tuesday night against Valparaiso, Suggs scored only four points in over 33 minutes but was the Salukis' player of the game. He grabbed a team-high nine rebounds, had five assists against one turnover and added two steals. His defense on 6-3 guard Javon Freeman-Liberty, the Valley's leading scorer at more than 21 points per game, was critical in SIU's 63-50 victory. Freeman-Liberty missed 15 of 21 shots and got only four free throw attempts.

Saturday night was a bittersweet moment for Suggs, as he returned to Carver Arena for the first time since leaving Bradley in 2017.

"It's been a long time coming," Suggs said. "I definitely enjoyed my time at Bradley. I have a lot of fond memories there, a lot of guys I played with, competed with, but, I'm focused on continuing the season that we started and going up there and trying to get a win."

The starting quarterback for the No. 1 team in the country. Undefeated. Forty-eight touchdown passes, six interceptions and 11 300-yard passin…

This week we look back at the biggest sports stories of the year, from Murphysboro overcoming a teacher's strike just in time to reach the sta…

Sports Column | Todd Hefferman: McGill doing what he can for Salukis

Sports Column | Todd Hefferman: Salukis a long way from the top of MVC, but far from bottom

SIU's men's basketball team will close the first third of its Missouri Valley Conference season Sunday against Drake, a team that tied for the…

Southern Illinois Salukis guard Ronnie Suggs (3) reacts to a three-point shot on Saturday during the second half of a game against the Southeast Missouri State Redhawks at the Banterra Center in Carbondale.

SIU guard Ronnie Suggs (3) pressures Valparaiso guard Javon Freeman-Liberty (0) during the first half at the Banterra Center on Tuesday in Carbondale.

SIU guard Ronnie Suggs (3) shoots over Minnesota State guard Jamal Nixon (1) during the first half of an exhibition game at the Banterra Center this season in Carbondale.