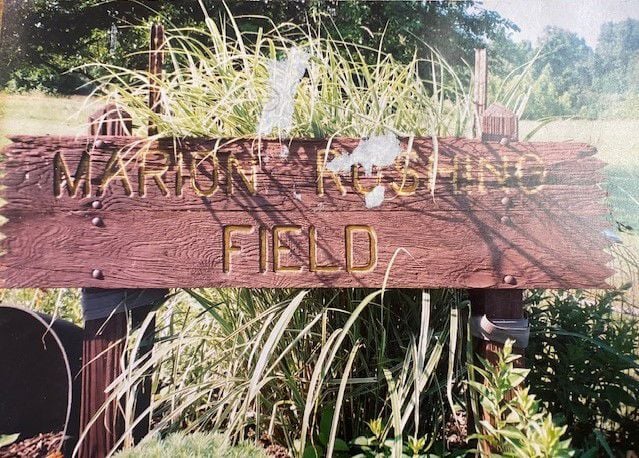 This sign used to adorn an old football field at Touch of Nature Environmental Center in Carbondale back in the 1950s and 60s, that was dedicated to SIU Hall of Famer Marion Rushing. The Saluki football team used to train there during the summer years ago. 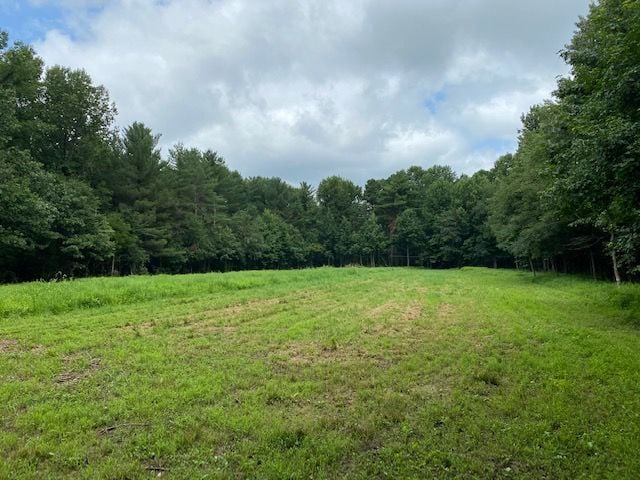 A look at the old Marion Rushing Field, which is now a clearing at Touch of Nature Environmental Center in Carbondale. The SIU football team used to use it as a training camp getaway in the 1950s and 1960s.

Just west of the entrance to Touch of Nature Environmental Center in Carbondale, surrounded by a wall of trees that shields it from the rest of the world, lies one of SIU's last dedications to one of its greatest athletes.

The north goalposts are still standing at the old Marion Rushing Field, where the SIU football team used to get away for training camp in the 1950s and 60s. Before embarking on their season at McAndrew Stadium, the Salukis would venture north up Route 51, turn right onto Route 13, and take a drive toward Giant City State Park before turning off for their annual training camp. After a few hours of practice, they would change at the cabins located right next to the field and spend a few more hours helping out with the various camps at the 3,100-plus-acre facility.

"They just used this as their summer training camp, and they'd work out here all summer long, doing odds and ends," said Dave Craig, who works at Touch of Nature. "They'd help out with some of the handicapped campers, too."

Craig, whose father, Douglas, knew Marion Rushing, was the poor sap who ran into the sign adorning the field years ago. It was hidden in the weeds. As the Salukis moved training camp south of McAndrew, to where the current practice fields are, south of Saluki Stadium, the 100-yard field fell into disrepair. Touch of Nature staff still mow it a few times a year to keep it up, but all that's left now are the goalpost and some old iron framework from the cabins the team used to stay at.

Craig hit the sign by accident with his mower, but, after brushing it off, realized he had a kind of a historical relic. Rushing, a Pinckneyville native, was a four-sport athlete at SIU in the late 1950s. He lettered in football, basketball, track and field and wrestling. In 1959 he won a conference title in wrestling and reached the NCAA quarterfinals. He was a three-time all-conference football player and was inducted into the SIU Hall of Fame in its inaugural class in 1978, with Walt Frazier, Jim Hart, James McAndrew, Jim Lovin, Charlie "Chico" Vaughn and Glenn "Abe" Martin, among others.

Rushing played 10 seasons in the NFL after graduating from SIU in 1959, competing for the Chicago Bears and St. Louis Cardinals.

After Craig realized what he had, he made sure it went somewhere where it would be cherished. He contacted Rushing's widow, and sent it to her.

Roger Smith, a certified arborist who is working to clear some trees for the trail, enjoys working by the historic field.

"As I understand it, the players had to be camp counselors while they were here," he said. "That was part of the deal. They'd come over here, practice a few hours a day, and be camp counselors five or six hours a day. Some were lifeguards. They took care of some of the campers in August and September, going into their football season."

The open field where SIU football used to train will no longer be open in a couple of weeks, however. As part of a new mountain bike trail at Touch of Nature, the facility is going to install some warm-up humps at the old Rushing Field for potential racers. The trail, which will stretch more than six miles around the field, is expected to be completed by October.

Sports Column | Todd Hefferman: Drag FCS football and me to the spring

I wanted it so badly, too, America.

Sports Column | Todd Hefferman: Salukis' Maguire eager to run it back next spring

This sign used to adorn an old football field at Touch of Nature Environmental Center in Carbondale back in the 1950s and 60s, that was dedicated to SIU Hall of Famer Marion Rushing. The Saluki football team used to train there during the summer years ago.

A look at the old Marion Rushing Field, which is now a clearing at Touch of Nature Environmental Center in Carbondale. The SIU football team used to use it as a training camp getaway in the 1950s and 1960s.