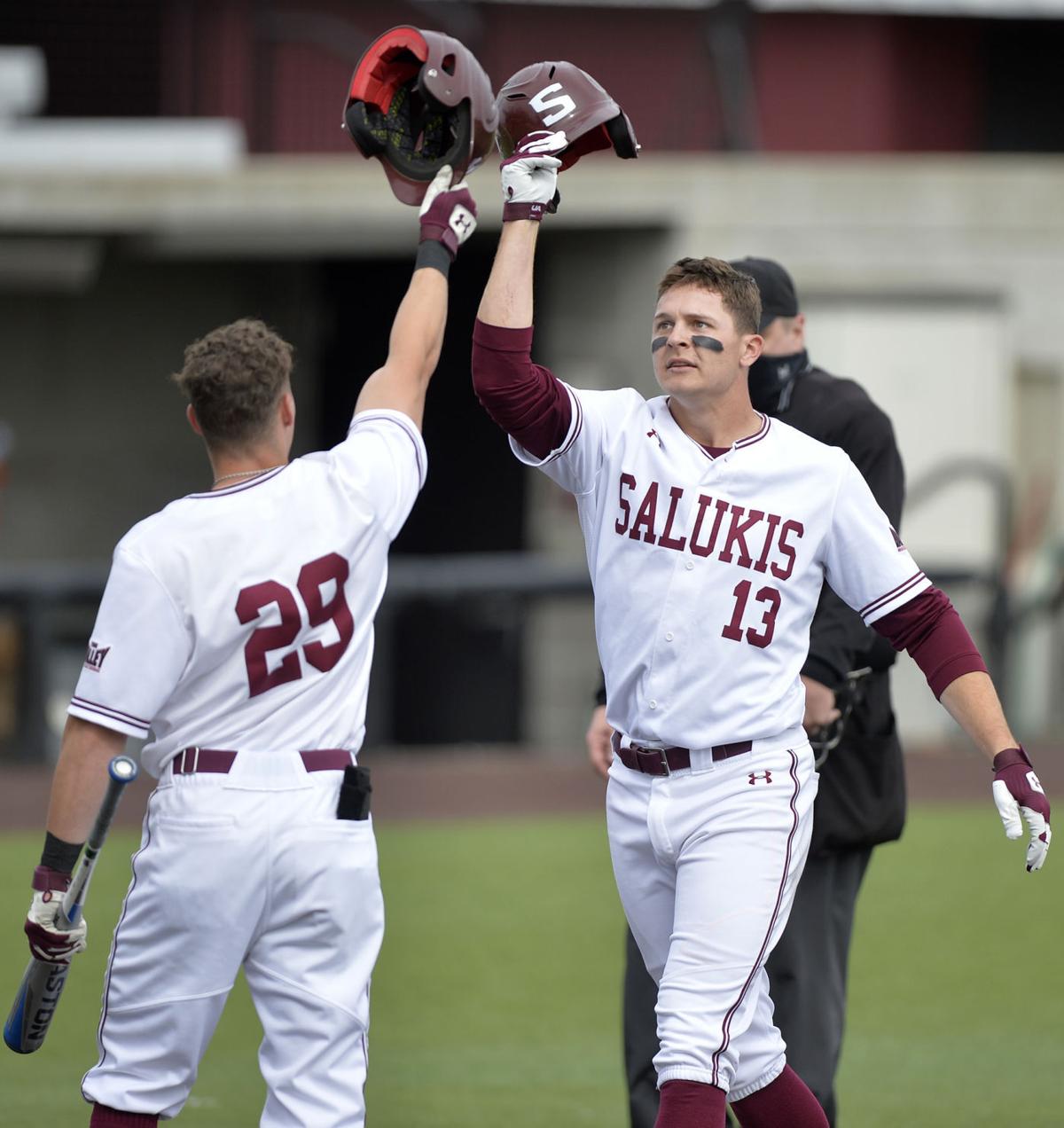 SIU’s J.T. Weber (13) is greeted by Cody Cleveland (29) after hitting the Salukis’ third home run of the fifth inning against Evansville at Itchy Jones Stadium on Friday in Carbondale. 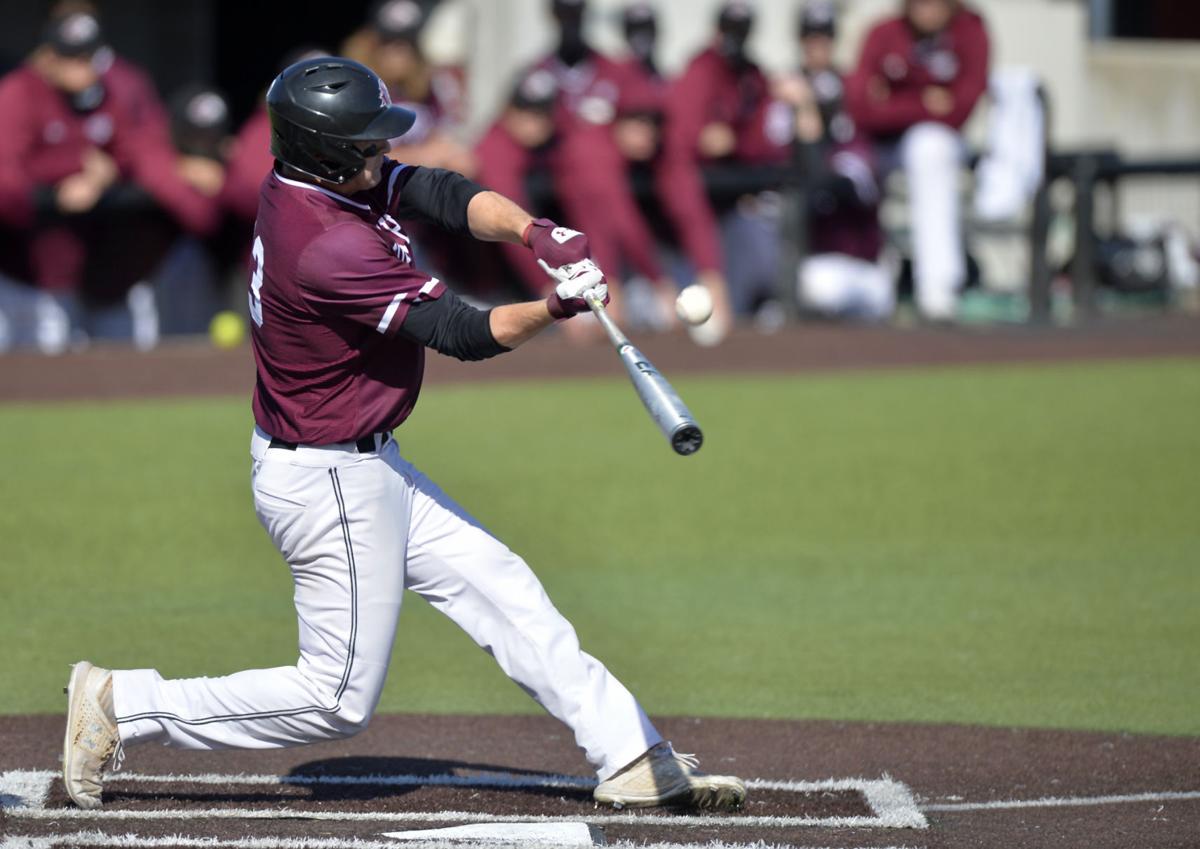 SIU left fielder J.T. Weber (13) puts the ball in play during the second inning against Marshall at Itchy Jones Stadium on Friday in Carbondale. 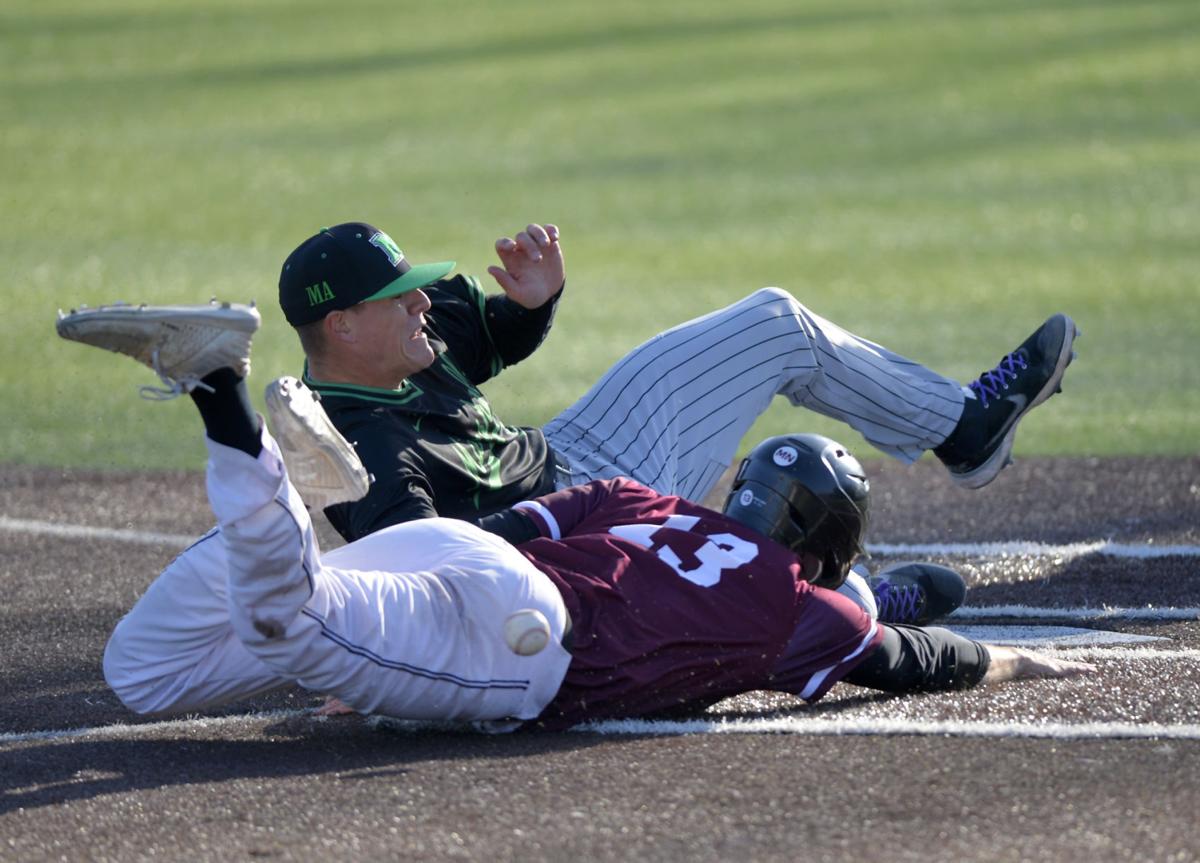 SIU’s J.T. Weber (13) scores on a wild pitch as Marshall pitcher Nick Adkins (57) covers during the sixth inning at Itchy Jones Stadium on Friday in Carbondale.

J.T. Weber called it another year as a Division I player and more maturity at the plate. You can call the Metropolis native's start dangerous to others.

Weber was already leading the Salukis (21-6, 4-4 Missouri Valley Conference) in home runs heading into the final game of their four-game series against Illinois State Sunday. Then he hit two out. The 6-foot-2, 200-pound junior was fifth on the team in RBIs until he tied a school record with eight in SIU's 14-11 loss to the Redbirds at Jones Stadium.

"Just growing as a player and as a hitter," Weber said. "This is my fourth year as a player at Division I. It just comes with age a little bit. I've been around the park a while, so, just maturing as a hitter."

Weber finished the series against Illinois State 5 for 16 with three extra-base hits, two of them home runs on Sunday. Weber's grand slam in the fifth cut the Redbirds' lead to 8-4, but SIU's pitching ultimately couldn't keep it in the game.

Weber did his best to keep the Salukis afloat.

"I don't think he did anything dramatic with his swing," SIU coach Lance Rhodes said. "He's just a year more mature, offensively. He's an older player, has good bat-to-ball skills and when you can find the barrel like he's doing, you can do some damage."

Weber drove in three more runs in SIU's 15-0 demolishing of Austin Peay Tuesday night, finishing the game 2 for 4. His 33 RBIs this season lead the Valley, as do his 10 home runs. Last spring, in the Salukis' abbreviated 18-game season, Weber didn't hit a single ball out in 69 at-bats.

Now he's got 10 round-trippers, the seventh-most in the country, in 99 at-bats entering Saturday's doubleheader against Bellarmine and Northern Illinois. After Friday's game that was scheduled against Bellarmine was canceled due to inclement weather, the Salukis will now open their three-team weekend at 2 p.m.

The Salukis have scored twice as many runs as their opponent 16 times in 27 games so far. At one point this season they did it in seven straight games.

Weber could also take some credit for Tuesday's win over the Govs on the mound, as he helped recruit the winning pitcher. Fellow Patriot Noah Farmer (3-1, 4.30 ERA) played with Weber in high school, and, along with another Saluki, Grey Epps, with the Nashville Knights summer team. Weber was the first to sign with SIU, followed by Franklin and Epps.

Weber looked at some schools in the Ohio Valley Conference, he said, but didn't waste any time the first day of his junior year.

There were more than 1,500 players still in the NCAA Division I men's basketball transfer portal earlier this week, according to verbalcommits…

One of my last years in college, the University of Iowa held a rummage sale at Kinnick Stadium that included old jerseys, practice jerseys, Ha…

SIU’s J.T. Weber (13) is greeted by Cody Cleveland (29) after hitting the Salukis’ third home run of the fifth inning against Evansville at Itchy Jones Stadium on Friday in Carbondale.

SIU left fielder J.T. Weber (13) puts the ball in play during the second inning against Marshall at Itchy Jones Stadium on Friday in Carbondale.

SIU’s J.T. Weber (13) scores on a wild pitch as Marshall pitcher Nick Adkins (57) covers during the sixth inning at Itchy Jones Stadium on Friday in Carbondale.