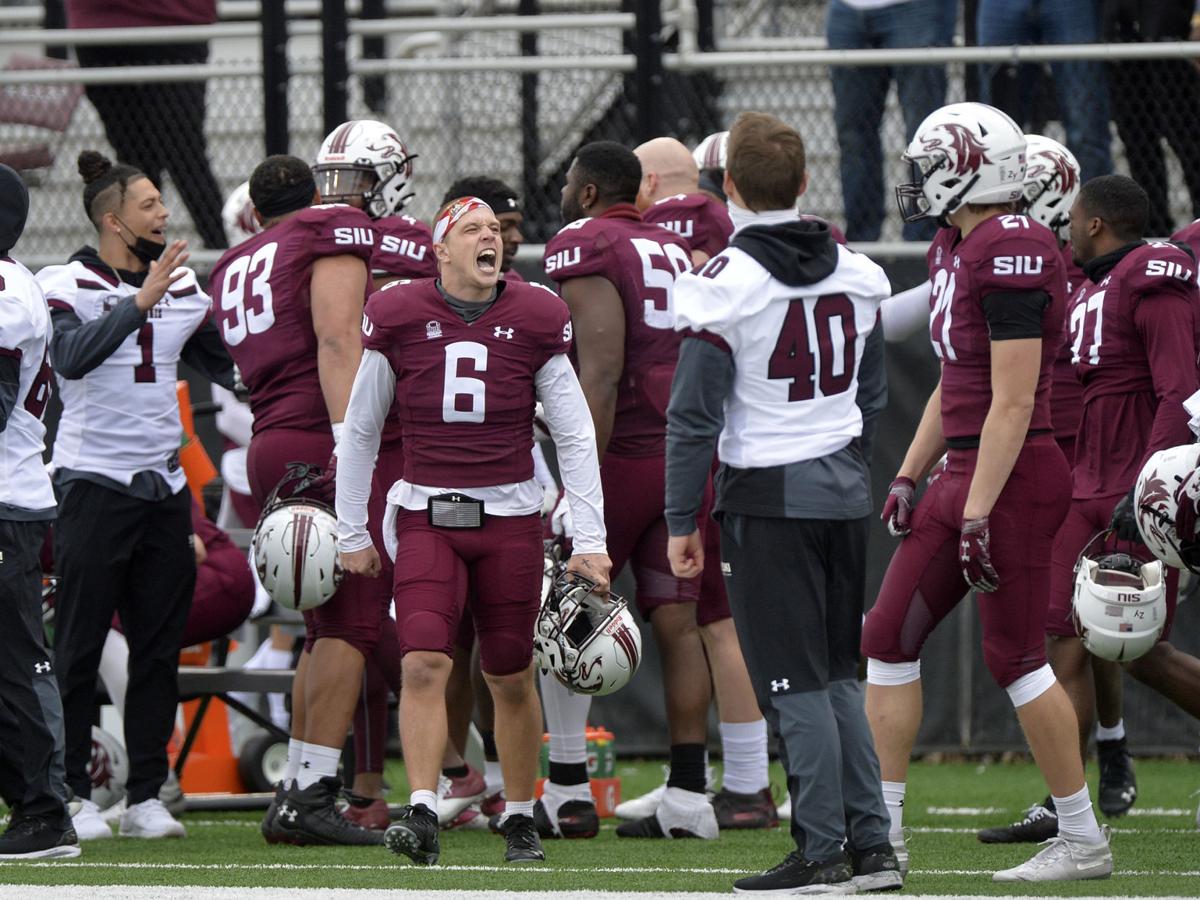 SIU quarterback Stone Labanowitz (6) reacts after the Salukis took the lead over Northern Iowa during the fourth quarter at Saluki Stadium on Saturday in Carbondale. SIU held on to win 17-16. 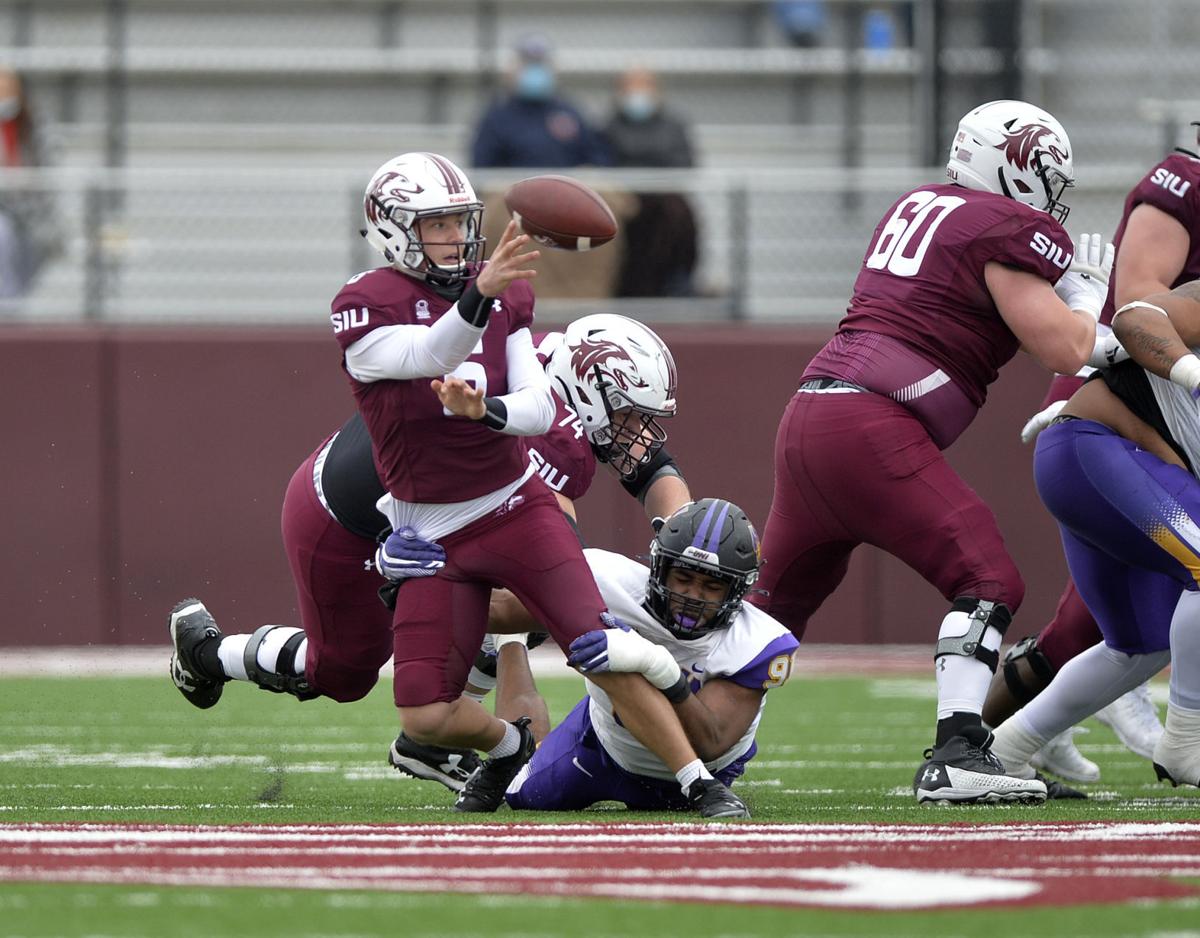 SIU quarterback Stone Labanowitz (6) gets off a pass while pressured by Northern Iowa defensive lineman Matthew Cook (97) during the third quarter at Saluki Stadium last season in Carbondale. 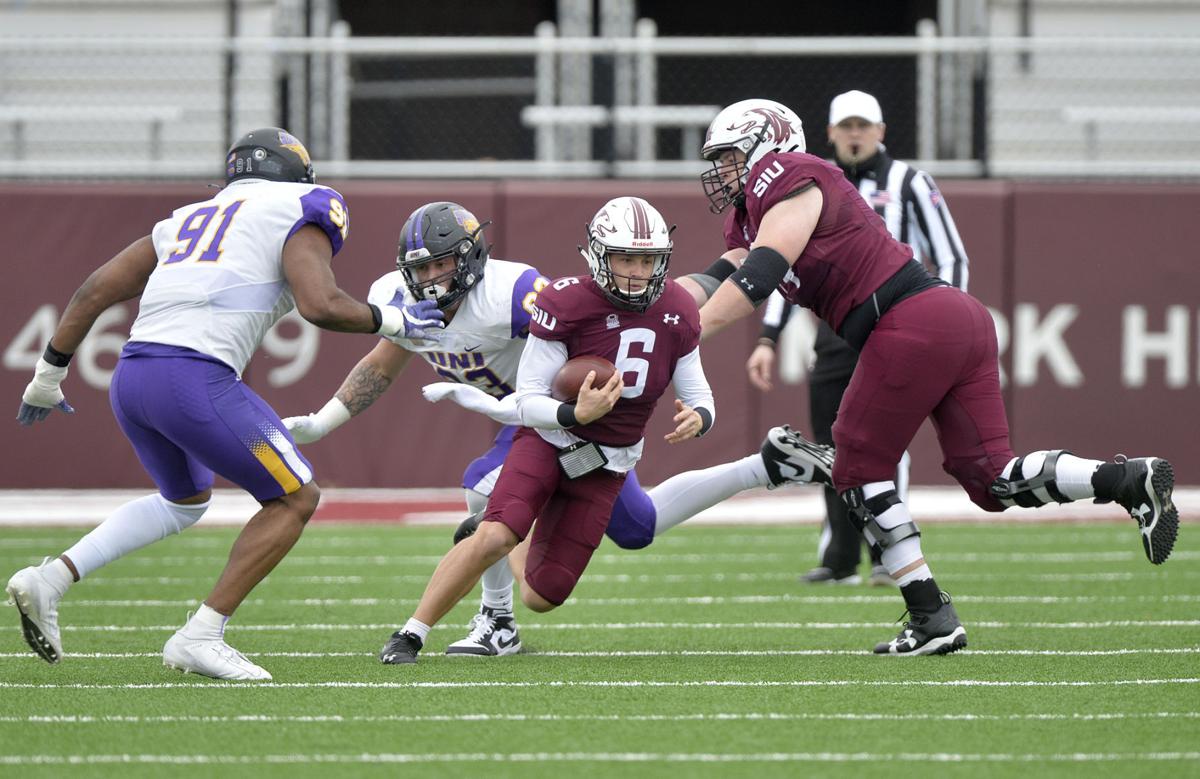 SIU quarterback Stone Labanowitz (6) scrambles during the third quarter against Northern Iowa at Saluki Stadium on Saturday in Carbondale.

CARBONDALE — Down six midway through the fourth quarter Saturday, SIU quarterback Stone Labanowitz had two choices when he dropped back from the Northern Iowa 3-yard line on third-and-goal.

With the pocket moving in on the 5-foot-10, 195-pound junior, Labanowitz spotted wide receiver Jerron Rollins running in the back of the end zone from his right. With Panther defenders right behind the line of scrimmage, Labanowitz had to try to either find a lane to throw a bullet pass or sail one toward the goal posts in the hopes that the 6-2 Rollins could snare it. If he didn't, the 10th-ranked Salukis were looking at a fourth-and-goal with the game on the line.

As it turned out, Rollins saw Labanowitz's pass all the way, and the backup quarterback put it right where he needed to.

"The coaching point/teaching point was 'Put that ball where only the receiver can get it,'" Labanowitz said. "And it's just hilarious how this stuff comes together, because I put that ball where nobody but Jerron could get it, and he went up and made a play. I saw the guy on his tail, and I thought 'I put this in front of him, or I put this in the air,' and that's an easy pick. I put it in the air and Jerron went up and made a huge play."

Rollins' 3-yard touchdown catch, his only reception of SIU's 17-16 win over the fourth-ranked Panthers, tied the game at 16 with 9:43 to play. Nico Gualdoni's extra point pushed the Salukis (4-1, 3-1 Missouri Valley Football Conference) ahead, and they went on to win after UNI kicker Matthew Cook missed a 30-yard field goal attempt in the final 10 seconds.

Labanowitz, in for the injured Nic Baker, who was in for the injured Kare Lyles, completed 11 of 15 passes for 91 yards after entering right before the end of the first half. Baker suffered a foot injury, and his status for this weekend's game against No. 8 South Dakota State (3-1, 3-1) was unclear.

Labanowitz, the starting quarterback in 2019 before injuring his shoulder, also rushed for 10 yards on four carries and led SIU to three second-half scoring drives. The last one, the Salukis' second touchdown drive against the seventh-ranked total defense in the country, went 12 plays and 75 yards. Labanowitz escaped a crumbling pocket on a third-and-5 from his own 40 and found Avante Cox for an 8-yard gain that extended the drive.

After running back Romeir Elliott was stopped twice inside the 8-yard line, bringing up third-and-goal, SIU ran some receivers underneath and sent Rollins to the center of the end zone to try to isolate him.

"That was where he was supposed to go," SIU coach Nick Hill said. "We motioned the tailback out to try to control the corner, somebody's gotta go with him, so we had an empty set. And then, based off the coverage we thought they would be in in that situation, we wanted to grab the underneath guys, and we wanted to sneak in the back of the end zone. It's fun to see a play, we've repped that play. Stone's repped that play, 50 times in his career here in practice. He executed. Jerron made a huge catch, and that was a big play in the game."

Elliott rushed for 80 yards on 20 carries and Javon Williams Jr. had 41 yards on 10 carries against the Panthers (2-2, 2-2), who had allowed one rushing touchdown in its first three games. The Salukis scored both of their touchdowns through the air. Williams took a pitch from Labanowitz late in the third quarter, pulled up to pass, and threw a 42-yard strike to a waiting Cox in the end zone. It was SIU's longest offensive play of the game.

The Salukis are confident they may have more big plays with Baker or Labanowitz under center. Labanowitz led SIU past UMass, an FBS program, on the road in 2019 and helped the Salukis beat a top-five team for the second time this season.

"We're not gonna change. We've got to have confidence in running what we feel like is the game plan to beat these guys," Hill said. "If you get conservative against (UNI), you ain't got a shot. If you're just gonna try to run it three yards and a cloud of dust, and can't pick up first downs, you're gonna have a long day. You'll put up 180 yards of total offense. They're hard to just grind. You've gotta operate, so, it was Stone's turn."

Salukis walk the walk, hold on for 17-16 win over fourth-ranked UNI

CARBONDALE — When fourth-ranked Northern Iowa looks back at Saturday's game at 10th-ranked SIU, it will mourn five lost red zone chances to sc…

CARBONDALE — One of the best rivalries in the Missouri Valley Football Conference returns to Saluki Stadium on Saturday, when fourth-ranked No…

Saluki Football 4-Down Territory: Blankenship out for the year, SIU moves up to 5th, and MSU's triple threat

Defensive tackle Jajuan Blankenship is out for the season, SIU moves up to fifth in the Stats Perform poll, and Missouri State's triple threat…

Saluki Football | Plenty of options for SIU under center

CARBONDALE — Stone Labanowitz helped SIU's football team rally against the fourth-ranked team in the country Saturday, and is in line to start…

Salukis move up to 5th in Stats Perform poll

CARBONDALE — Two days after defeating its second top-five opponent of the season, the SIU football team moved up five spots to fifth in Monday…

Who's more likely to make the CFB Playoffs: Clemson or Ohio State?

Who's more likely to make the CFB Playoffs: Clemson or Ohio State?

SIU quarterback Stone Labanowitz (6) reacts after the Salukis took the lead over Northern Iowa during the fourth quarter at Saluki Stadium on Saturday in Carbondale. SIU held on to win 17-16.

SIU quarterback Stone Labanowitz (6) gets off a pass while pressured by Northern Iowa defensive lineman Matthew Cook (97) during the third quarter at Saluki Stadium last season in Carbondale.

SIU quarterback Stone Labanowitz (6) scrambles during the third quarter against Northern Iowa at Saluki Stadium on Saturday in Carbondale.