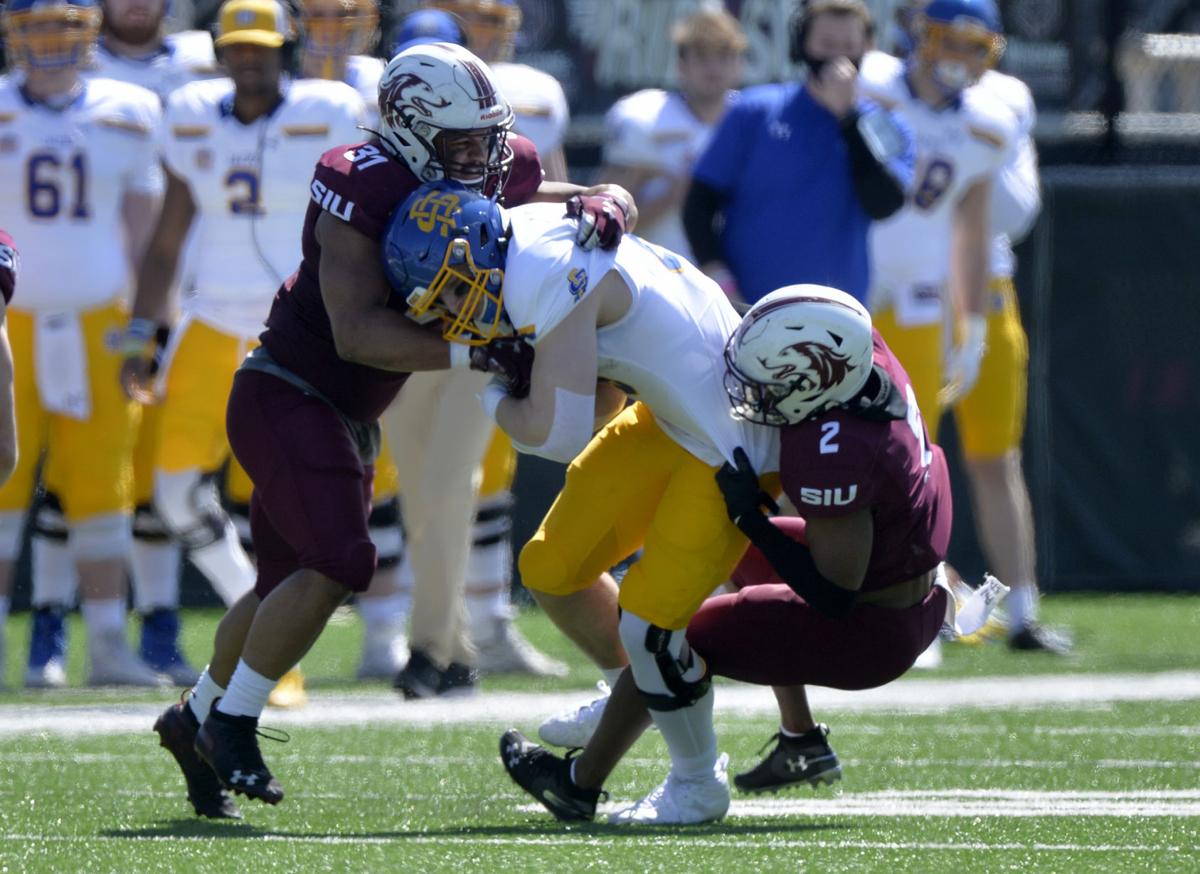 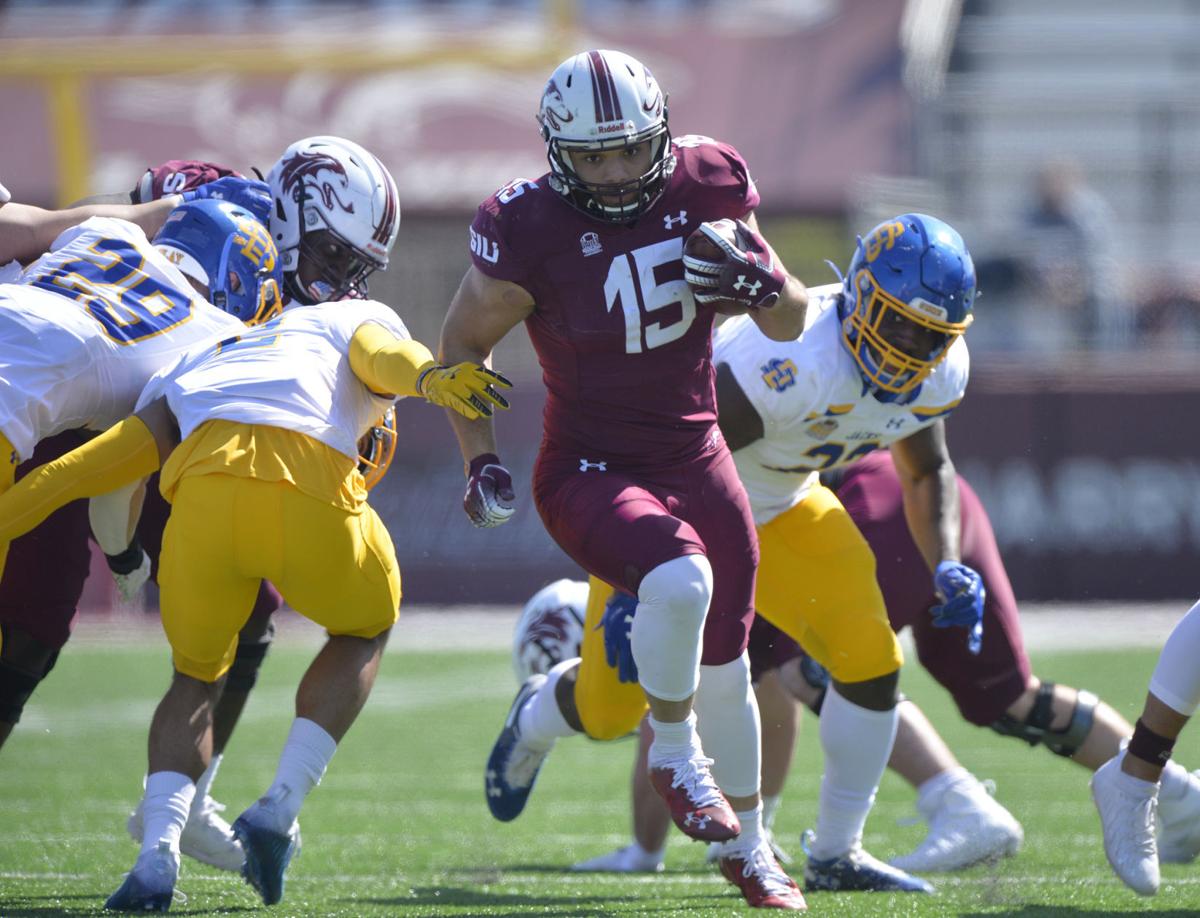 SIU running back Javon Williams Jr. (15) looks for running room against South Dakota State during the third quarter at Saluki Stadium on March 20 in Carbondale. SIU went on to lose 44-3.

CARBONDALE — Western Illinois has pulled out of Saturday's football game at No. 16 SIU, as well as its make-up game that was scheduled at South Dakota April 17, due to what is being described as "the safety and well-being of its student-athletes."

"As we evaluated our current situation, in terms of the numbers of players available, and specifically at a few key positions, I believe it is in the best interest of our team to forego the remaining two games of the spring season," WIU coach Jared Elliott said Monday in a news release.

"I could not be prouder of how our guys have battled through unprecedented challenges due to COVID and lack of depth. This was not an easy decision, we enjoy every opportunity to compete, but I feel this is the right one for the health and safety of our players. We are excited and committed to putting a healthy and hungry Leatherneck football team on the field this fall," Elliott wrote.

WIU (1-5, 1-5 Missouri Valley Football Conference) won its first game of the season Saturday at home against Youngstown State, 27-24. The Leathernecks were scheduled to play at SIU (4-3, 3-3) at noon Saturday, in what was supposed to be the Salukis' regular-season finale.

Before the news from WIU came, SIU coach Nick Hill said during his weekly press conference Monday morning that his team had about 70 players out of a roster of about 100 practicing, but planned to play the Leathernecks.

The MVFC does not have a steadfast rule as to how many healthy players teams are required to have to play, but recommend at least 53. The Salukis' game last fall against No. 25 Southeast Missouri State was postponed for a few days because of COVID-19-related issues within the Redhawk program.

SIU has played all the games on its spring schedule on time.

Four of the Valley Football's five scheduled games last weekend were canceled or postponed due to COVID-19 issues or because a team opted out. SIU was scheduled to play at Illinois State, which opted out of the remainder of its spring season in March.

WIU did not mention COVID-19 as its reason to quit on Monday. Elliott and three team captains are scheduled to appear at a virtual press conference Tuesday at 3 p.m.

Hill posted a statement on his Twitter account after WIU announced it was calling off the game.

"I am deeply disappointed — disappointed for our players, our coaches, our fans and for our league," he said. "Ten conference schools stood together in January and made an 'unwavering commitment' to each other to play a full spring schedule. Our last two opponents have now backed out of that pledge.

"Here at SIU, our players and coaches remained committed to do the right thing the entire season. No excuses. We had a freak blizzard that kept us from practicing during the 10 days leading up to our season opener at North Dakota. When other teams opted out due to weather, WE PLAYED," he said.

"We started the season 4-1 and ranked fifth in the country, then lost two starting quarterbacks and two starting defensive tackles. When other teams opted out due to injuries, WE PLAYED. Last Saturday at Missouri State, we were down to five defensive linemen and traveled 11 true freshmen. WE PLAYED. Not one time this season has our team complained or looked for an excuse."

SIU has faced its own hurdles, like most teams around the country.

The Salukis opened at North Dakota without several players, and without being able to practice outside for more than an hour that week because of severe cold. They were able to meet virtually and do walk-throughs indoors.

SIU lost 44-21 against a team that is now ranked sixth in the country, after committing five turnovers. Starting quarterback Karé Lyles was knocked out of that game, and his backup, Nic Baker, was lost for the season due to a foot injury in the 17-16 win over then-No. 4 Northern Iowa.

The Salukis used three defensive ends, essentially, at Missouri State two weeks ago after starters Jajuan Blankenship and Tylan Driver were both lost with injuries.

SIU still hopes to hear its name as an at-large bid to the FCS playoffs, which is reduced to 16 teams this spring (11 automatic bids and five at-large bids).

The Salukis are currently tied for fifth in the MVFC standings with No. 24 Northern Iowa (3-3, 3-3). They beat No. 2 North Dakota State 38-14 Feb. 27, ending the Bison's FCS-record 39-game winning streak, and held on to the win over the Panthers when UNI missed a short field goal on the final play of the game, but have struggled their last two weeks. Fourth-ranked South Dakota State beat the Salukis by 41 without All-American running back Pierre Strong Jr. in Carbondale March 20, and they lost on a last-second field goal at previously unranked Missouri State March 27, 30-27.

"We've lost two games in a row, and the experts say we're out of the playoffs, and still not one person has questioned continuing to play," Hill said. "We practiced on Easter Sunday. We could have taken the easy way out. WE PLAYED. When the selection committee looks at the resumes of the teams that are still competing this spring, they will see our Top 25 wins over SEMO, Northern Iowa and North Dakota State. More importantly, I hope they see that, regardless of the circumstances, THE SALUKIS PLAYED. I am incredibly proud of our football team."

CARBONDALE — When SIU's football team needed another defensive tackle, it turned to a defensive end the size of one at Missouri State two weeks ago.

Salukis fall to 18th, Southeastern Louisiana moves up to 17th

CARBONDALE — The SIU football team fell two spots without playing a game in the Stats Perform top 25, to No. 18, ahead of this weekend's regul…

CARBONDALE — SIU football coach Nick Hill and his team were excited to get ready for a game that almost didn't appear on Monday.

Saluki Football | Lions have won a lot of shootouts this season

CARBONDALE — Frank Scelfo and his 17th-ranked Southeastern Louisiana football team are going after more than a win Saturday at No. 18 SIU. The…

Saluki Football | 3 things to watch in No. 17 Southeastern Louisiana/No. 18 SIU

Saluki Stadium hasn't ever hosted a playoff game, but Saturday's game between 17th-ranked Southeastern Louisiana and 18th-ranked SIU will have that feel.

SIU running back Javon Williams Jr. (15) looks for running room against South Dakota State during the third quarter at Saluki Stadium on March 20 in Carbondale. SIU went on to lose 44-3.