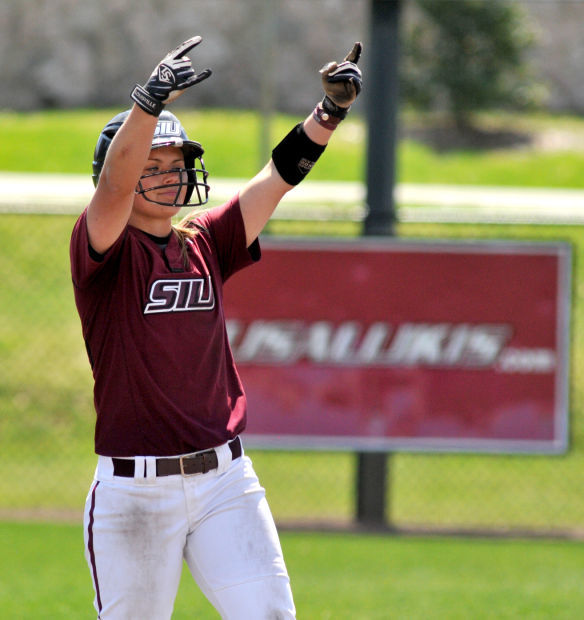 SIU's Jayna Spivey celebrates after hitting a double in a 5-4 Salukis win over Illinois State during the 2014 season. Spivey, who finished her career with the school record for RBIs (now she's second), is now a hospitalist in Harrisburg. 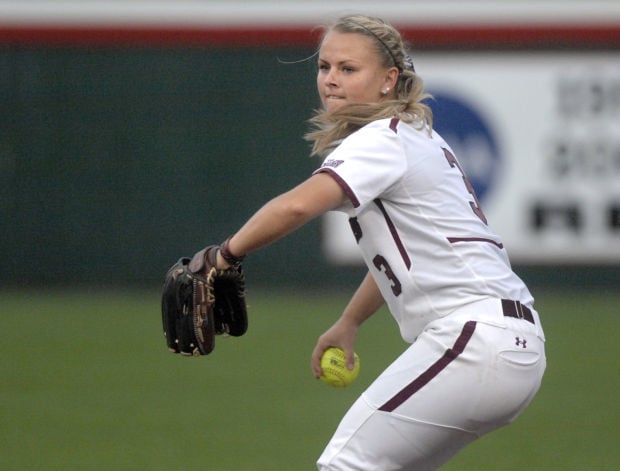 SIU's Jayna Spivey looks to first base after scooping a ground ball in a first-round MVC Tournament loss to Loyola. 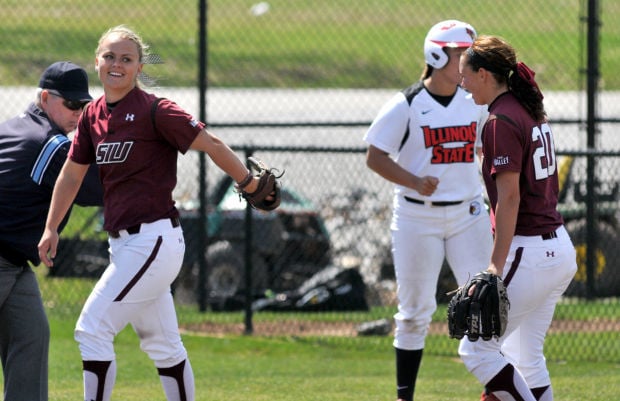 SIU's Jayna Spivey (left) and Taylor Orsburn share a smile Sunday after working together to record an out against Illinois State during the 2014 season.

A biological sciences major in college, Cowsert is now a hospitalist in Saline County, where she sees patients that are admitted to the facility. Saline County has had eight COVID-19 cases as of Friday morning, according to statistics from the state, but all eight have recovered. Cowsert said she is not sure where we will be with the virus in the next few weeks, but is sure her days with the Saluki softball team and coach Kerri Blaylock prepared her for where she is today.

"She really instilled leadership and accountability, time management," Cowsert said. "We always talked about how early we worked out, and if you're on time you're late. I'm still 10-15 minutes early with everything I do. That just goes a long way in your career and in life, after softball. PA school, I was very well prepared for a lot of the challenges I faced just because of my experience on the team."

Spivey, one of 15 players in Missouri Valley Conference to be named all-league all four years when she finished playing in 2014, was a three-time first team selection on the MVC Scholar-Athlete Team. The Rosiclaire native was first team All-MVC three times (2011, 2013 and 2014) and made the second team as a sophomore in 2012, when she started all 56 games at second base and hit .272. Her seven home runs and 34 RBIs were the second-most on the squad.

"I think anybody can have any type of swing, but if they don't have any confidence it goes away," she said. "My sophomore year, I didn't have any confidence, and I found it through my junior and senior years. You just have to learn that nobody is going to give you confidence, and it's up to you. I think that's what helped me become a better hitter, and no matter what my last at-bats were like I could always be confident in myself. Sometimes it worked out, and sometimes it didn't."

SIU won 125 games during her four years (2011-14) but never reached the NCAA regionals. The Salukis won 36 games in 2012 and hosted the MVC Tournament. SIU beat Creighton 3-2 in its first game and Northern Iowa 1-0 to reach the title game, but ran into a buzzsaw in Illinois State. The Redbirds got two three-run homers and seven RBIs from Laura Canopy, scored a tournament-record 13 runs, and beat the Salukis 13-3 at Charlotte West Stadium.

Cowsert said she'd give all her records back to have won that game.

SIU broke a 10-year NCAA drought in 2017 when it won the MVC Tournament. The Salukis made the regionals again in 2019 as an at-large berth, and were poised to make a run at the 2020 tournament before the virus shut everything down in March.

Cowsert married Travis Cowsert, a former All-South basketball player at Hardin County High School, almost three years ago. The two grew up five miles apart and had a baby boy last fall. After working at a family practice in Marion for a few years, she moved back closer to home and is back living in Hardin County.

"I always through I'd be a physician's assistant or a nurse practitioner," she said. "I just really liked the flexability and being able to be in the medical field, and being able to practice in almost any area. I'm able to stay in my community and give back. I've really gotten a lot of joy out of it. I think I made the right decision in my career choice."

CARBONDALE — Saluki Athletics reported no positive tests for COVID-19 in its first wave of athletes that returned to campus earlier this month.

SIU's Jayna Spivey celebrates after hitting a double in a 5-4 Salukis win over Illinois State during the 2014 season. Spivey, who finished her career with the school record for RBIs (now she's second), is now a hospitalist in Harrisburg.

SIU's Jayna Spivey looks to first base after scooping a ground ball in a first-round MVC Tournament loss to Loyola.

SIU's Jayna Spivey (left) and Taylor Orsburn share a smile Sunday after working together to record an out against Illinois State during the 2014 season.