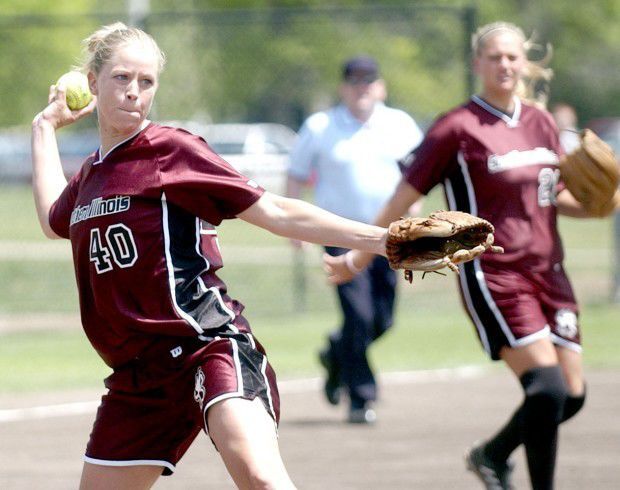 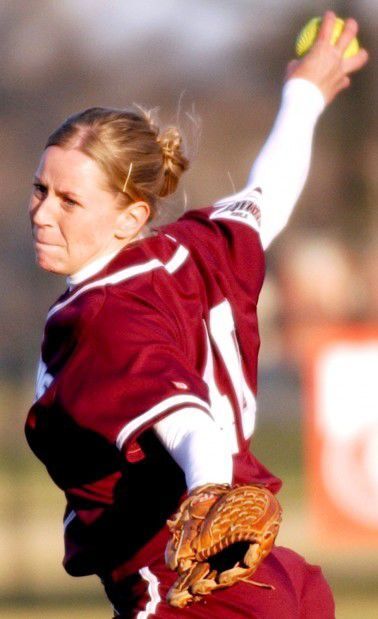 Former Southern Illinois pitcher Amy Harre delivers a pitch during a game in May 2005. Harre was selected to the SIU Hall of Fame in 2020.

It’s fitting that perhaps the best softball pitcher in Southern Illinois history is spending part of her life teaching what made her so good.

Amy Harre Cross, now married with three sons aged 8, 6 and 4, lives in Lincoln, Illinois, about 30 miles away from Springfield. She owns a facility called Champions Fieldhouse, where she and her husband, Ryan, instruct baseball and softball players on their game’s finer points.

Amy, of course, works with softball pitchers. And if she’s any bit as good a teacher as she was a pitcher at Nashville and SIU, high schools in central Illinois should be very tough to beat for years to come.

In four years at Nashville, Cross’ earned run average was never higher than 0.84. As a senior in 2001, when the Hornettes won a state championship, it nearly matched Blutarski’s GPA in Animal House at 0.12.

Or to put it another way, Cross threw 241 innings over 35 games and allowed four earned runs. There might not have ever been an easier choice for the Southern Illinoisan Player of the Year than she was 19 years ago.

“What a competitor,” said her high school coach, Chad Malawy, who’s currently the baseball coach at Nashville. “She was a strike-throwing machine.”

Malawy felt so invincible with Cross in the circle that he made a choice in the state title game few coaches would even think about. At that time, the IHSA had teams flip before every game to determine home and visitor in the state tournament.

After losing the toss in the quarterfinals and semifinals, the Hornettes won the toss before the championship game. Almost every coach would eagerly elect to be the home team, wanting the advantage of the last at-bat in a tie game.

Malawy preferred the first chance to score runs, figuring that any lead he could hand Cross was basically the equivalent of a postgame celebration. When Cross walked into the circle for the bottom of the first, Nashville owned a 3-0 lead.

Game over, drive home safely. Cross allowed one hit and fanned two. The other 19 outs came via grounders, the product of a nuclear sinker that lent itself to weak contact.

“I got a lot of ground balls and let the defense do the work,” Cross said.

About an hour south, a young college head coach noticed. SIU’s Kerri Blaylock wanted Cross to do for her program what she did at Nashville. One signature later, Cross gave Blaylock the program-changer she desired.

Most players, no matter how high their skill level, experience some level of adjustment from high school to college. Cross was one of the ones who didn’t. In 189 innings as a Saluki freshman, Cross was touched for one homer.

Call that a preview of coming attractions. Cross and the group Blaylock recruited with her took SIU to four straight NCAA Tournaments. They beat elite programs like Stanford, Michigan, LSU and Missouri.

Simply put, with Cross in the circle, they were elite.

“When she was on the mound,” Blaylock said, “we were in the ball game with anyone we played. She was an extreme power pitcher. She threw over 70 miles per hour and at that time, that was an anomaly. If it wasn’t a strikeout, it was a ground ball.”

The Salukis came within a game of the Women’s College World Series in 2003, losing 2-0 to Alabama in a regional final. Fifteen years after throwing her last pitch, Cross still owns the program record for most shutouts (49) and is tied with Brianna Jones for the most complete games (90).

After pitching professionally in NPF for the Chicago Bandits and overseas for a few years, Cross now gets her thrills from watching her students achieve. Whether it’s an 8-year old flinging one over the plate for the first time or watching an 18-year old figure out how to spin the ball for extra movement, Cross is equally happy.

“With three young boys, I probably won’t have the opportunity to coach a team,” she said. “So I love all of it. It’s funny that I got degrees in physiology and chemistry at SIU, and I’m giving pitching lessons.”

It was once said that there are lies, damned lies, and statistics.

As the statistics show, there’s probably no one better qualified to teach pitching a softball than Cross.

Video: 'The moment wasn't too big for them'

Video: 'The moment wasn't too big for them'

Former Southern Illinois pitcher Amy Harre delivers a pitch during a game in May 2005. Harre was selected to the SIU Hall of Fame in 2020.