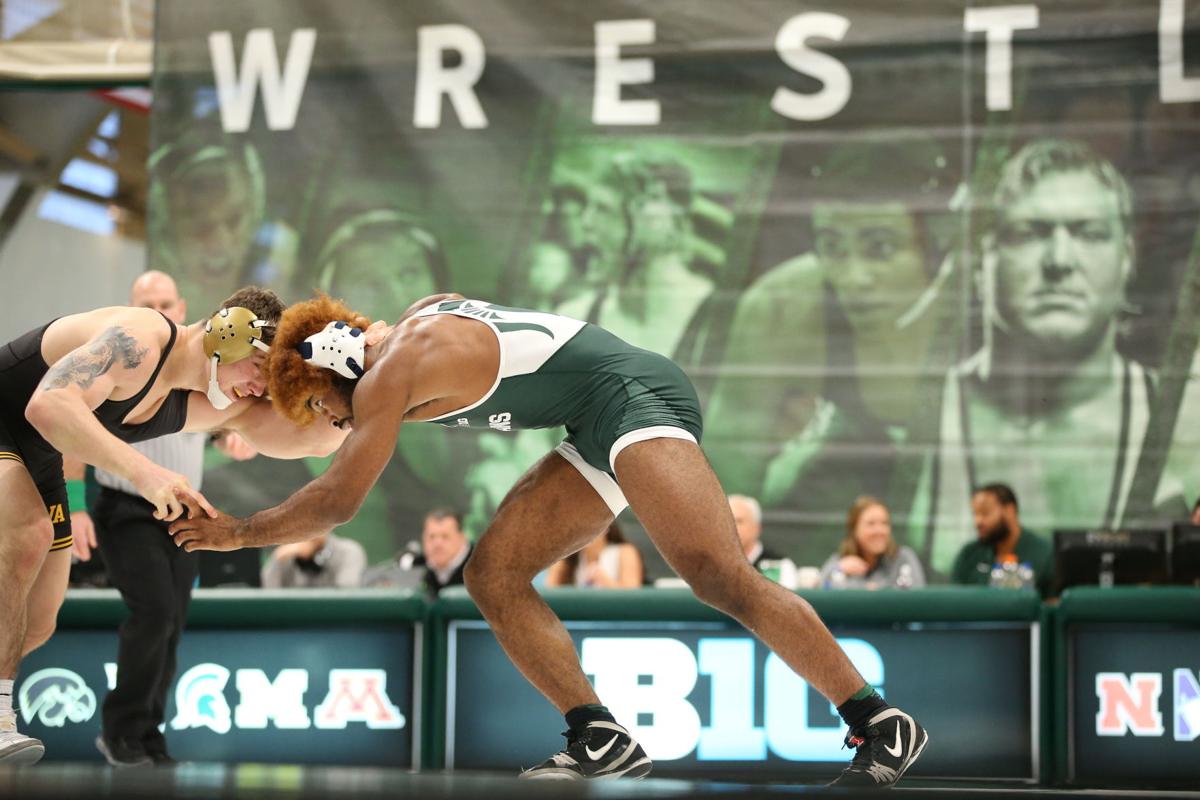 Cameron Caffey attempts to take control of his opponent during a wrestling match. 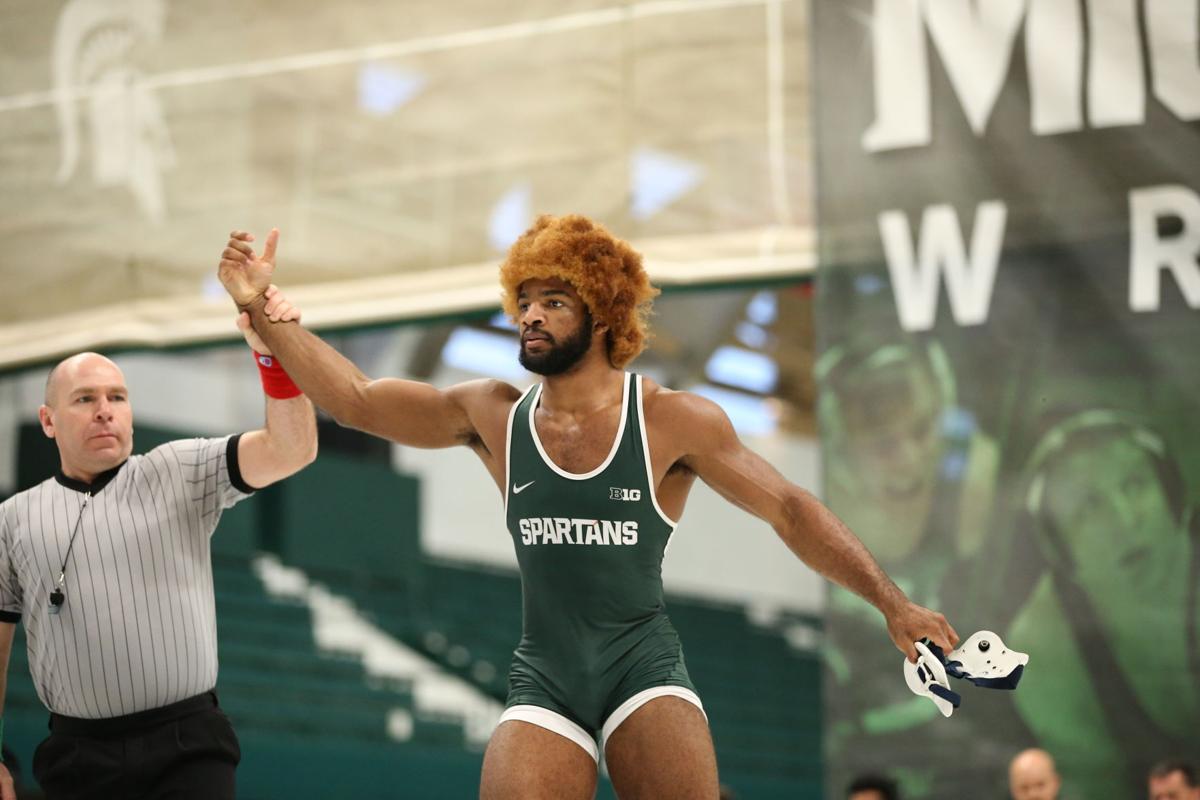 The official raises Cameron Caffey's arm after he wins a wrestling match. 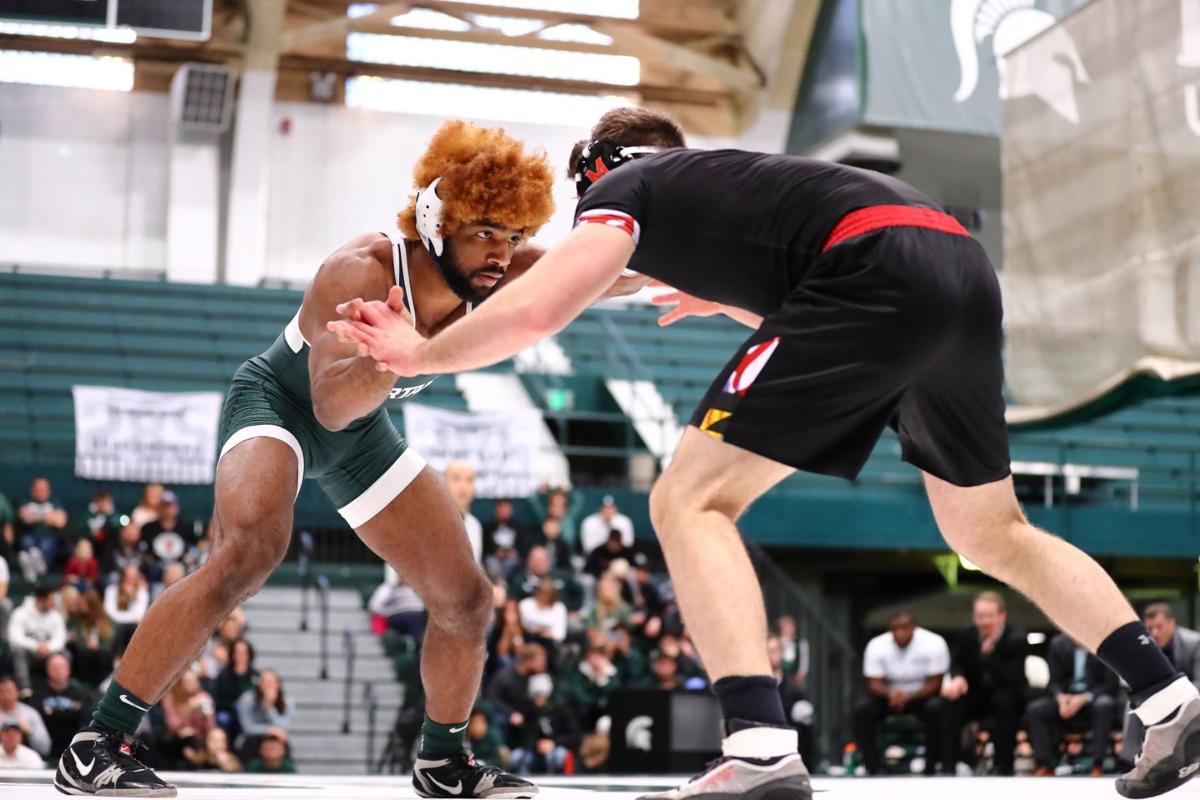 Cameron Caffey wrestles his opponent during a match. 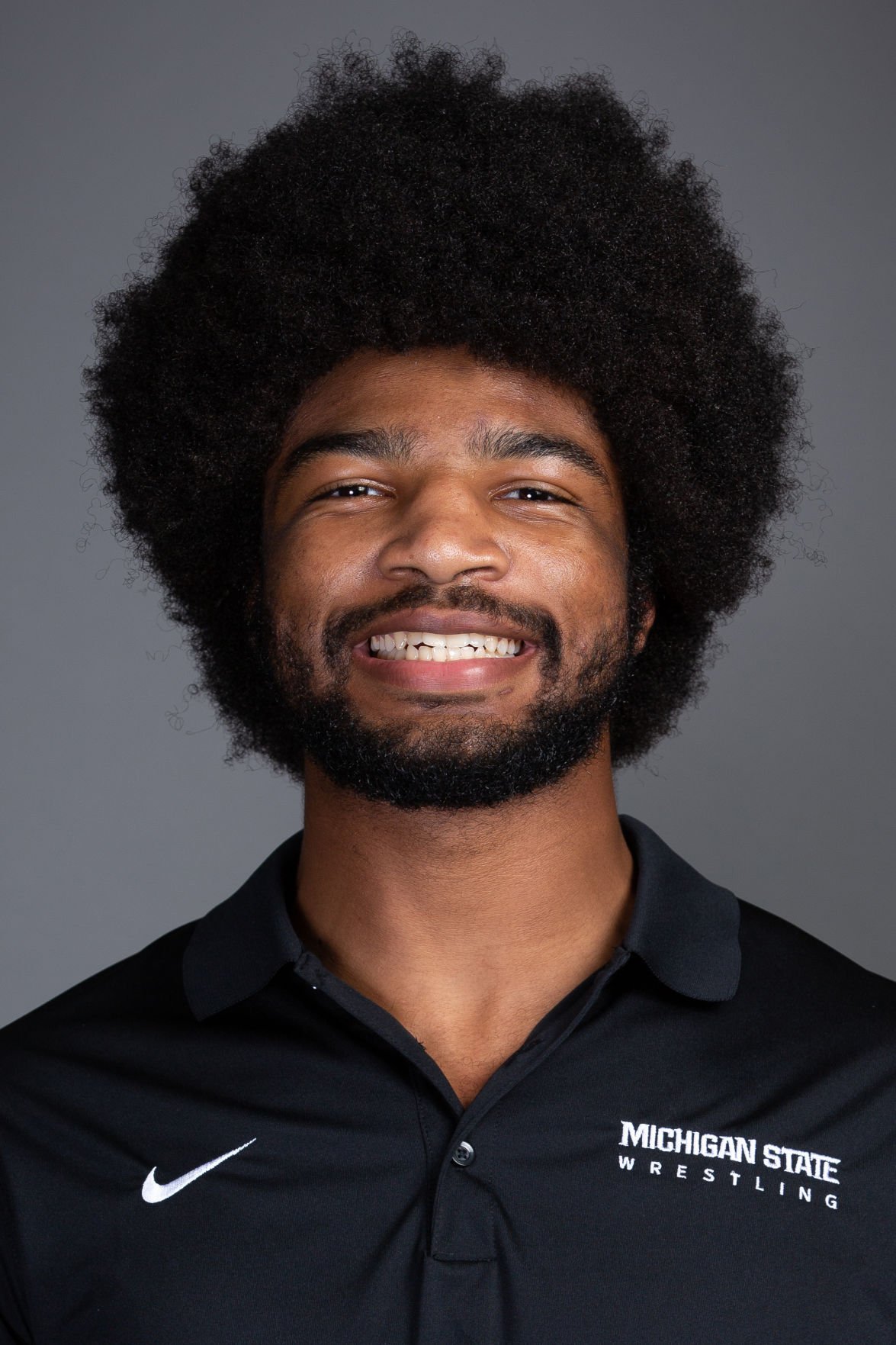 But Carbondale product Cameron Caffey approaches his sport a bit differently than everyone else, which is why the 2017 Southern Illinoisan Wrestler of the Year has become one of the Big Ten’s best at Michigan State.

“To succeed at anything in life,” says Spartans coach Roger Chandler, “you have to have balance. Too often in this sport, when you get to the highest levels, your identity is based on wrestling.

“Cameron is very level-headed, easy to talk open, and open and honest about everything. He wants to be a computer science engineer, and I enjoy that because it brings balance to him as a student-athlete.”

A computer engineering major, Caffey takes a thinking man’s approach to wrestling. Sure, he’s a good athlete, and sure, he’s strong. But he often goes against opponents with more strength and size.

However, Caffey’s 59-16 record and consecutive NCAA Tournament berths at 184 pounds — he didn’t get to go in March 2020 after COVID-19 brought sports to a stop — display that his way has a place.

In a battle of brains vs. brawn, Caffey’s noggin is more than a great equalizer.

“I’ve figured out that I’m going to do it a different way,” he said. “A lot of the stuff that I did in high school, I either don’t do it now or I do it in a different way.”

Caffey realized quickly during his redshirt freshman year that he had to evolve or risk failing on the mat. The guy who went 41-0 en route to a state title in 2017 would have to reinvent himself to an extent.

So he leaned on the basics — on and off the mat. He laid down a strong foundation in the classroom and made the necessary changes to his arsenal during practice, as well as 28 matches that he wrestled in open events.

Caffey’s 22-6 record didn’t count towards his team’s success or even his career mark, but it counted in one other way.

“I got used to not being at home and having to take care of business,” he said. “There are guys who are good in high school and then they just fall off when they don’t have supervision and can’t take care of themselves.

“That redshirt year was essential as far as starting on the right foot. I got in good standing academically, I got bigger physically and I became a better wrestler.”

His foundation laid, Caffey went 32-9 in 2018-19, winning his first 19 matches and capturing three tournament titles. He split four matches at the NCAA Championships, even beating a top seed along the way.

Last year, Caffey posted a 29-7 mark, rising to No. 7 nationally in his weight class. He won 12 straight matches at one stage in Big Ten action, beating seven top 25 opponents along the way, and wrestled for the conference title at his weight class before losing 3-2 to Penn State’s Aaron Brooks.

Caffey was primed to make noise at the NCAA Championships. Coronavirus pinned the sports world to the mat pretty quickly.

“I was going to have tough matches right off the bat, but I was sure that I was going to do pretty well,” he said. “The Big Ten ended on a Sunday, we had huge crowds at the meet, and then all of a sudden there’s nothing.

“It was out of my control, obviously, but I felt sorry for the seniors because that was their last chance.”

Caffey and his Michigan State teammates can only train and wait for the chance to start their season. In late summer, the plan was for the season to start in January and the NCAA Championship to take place in late March.

Increasing COVID-19 rates around the country have put those plans on hold. Michigan State’s website doesn’t even list a 2021 wrestling schedule, if that tells one anything.

That doesn’t mean Caffey doesn’t have something to work for, though. He won his weight class at the USA Greco-Roman National Championships in November, earning a trip to the Senior World Team Trials next year.

And the weird thing is, Caffey loves freestyle wrestling more. In Greco-Roman, you can only use your upper body. But leave it to the thinking man’s wrestler to find a way to win without all his tools.

“I think it goes back to his unique style,” said Chandler. “I compare him to a cat because he always seems to land on his feet. You can always see him out there thinking — ‘you might be stronger than me, but I can always outsmart you’ — and that’s what makes him the successful wrestler he is.”

Where Are They Now? | McGill uses softball to forge career path

Little did Jacqueline McGill realize as she was starring on softball fields throughout Southern Illinois a decade ago at Hamilton County that she would be doing what she is today.

The SIU men's basketball team lost its fifth straight game late Friday night, when the Missouri Valley Conference announced the Salukis' game at Missouri State scheduled for Thursday would be rescheduled for Feb. 10 because of COVID-19 protocols.

Cameron Caffey attempts to take control of his opponent during a wrestling match.

The official raises Cameron Caffey's arm after he wins a wrestling match.

Cameron Caffey wrestles his opponent during a match.