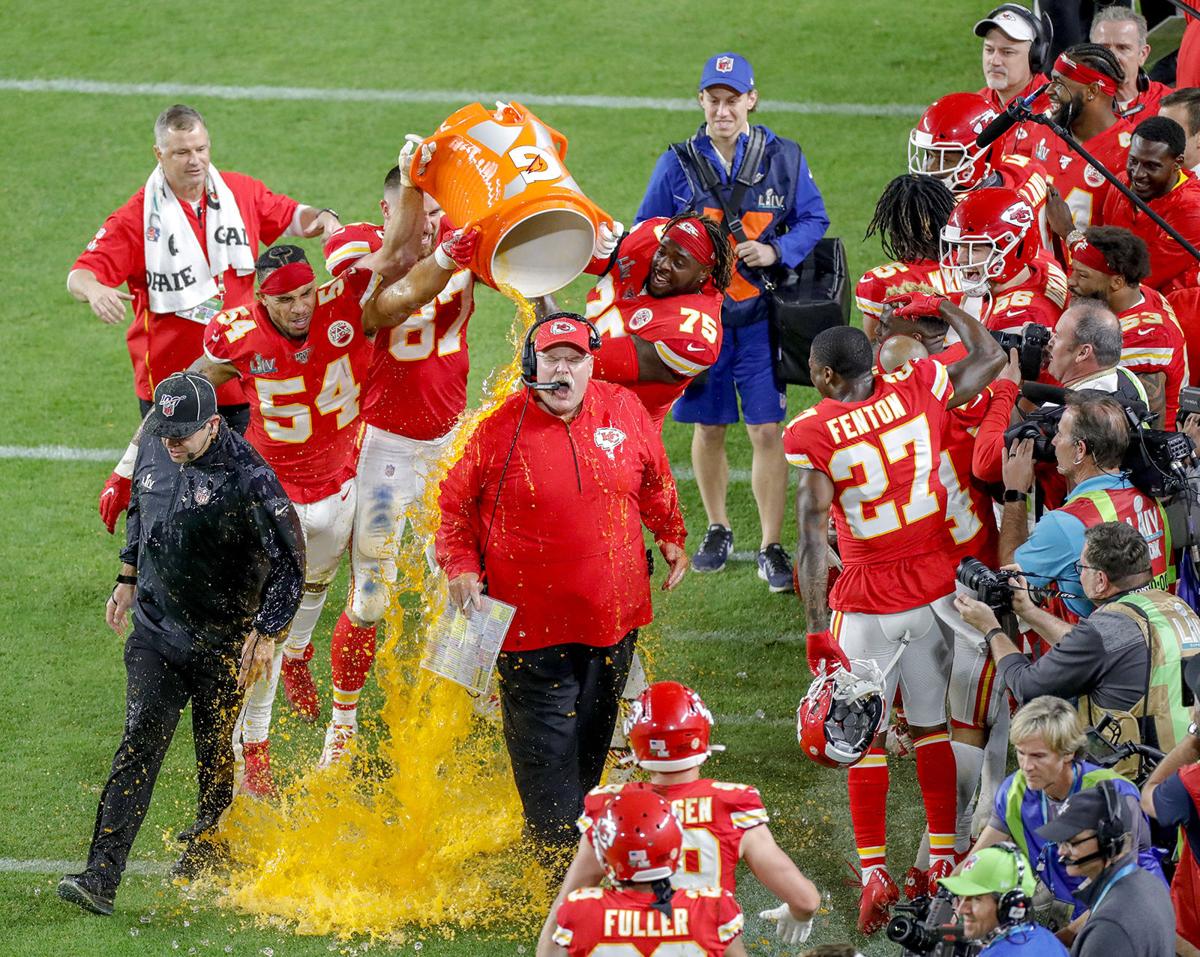 Kansas City Chiefs head coach Andy Reid reacts as players shower him on the sidelines at the conclusion of a 31-20 win against the San Francisco 49ers in Super Bowl LIV at Hard Rock Stadium in Miami Gardens, Fla., on Sunday, Feb. 2, 2020. (David Santiago/Miami Herald/TNS) 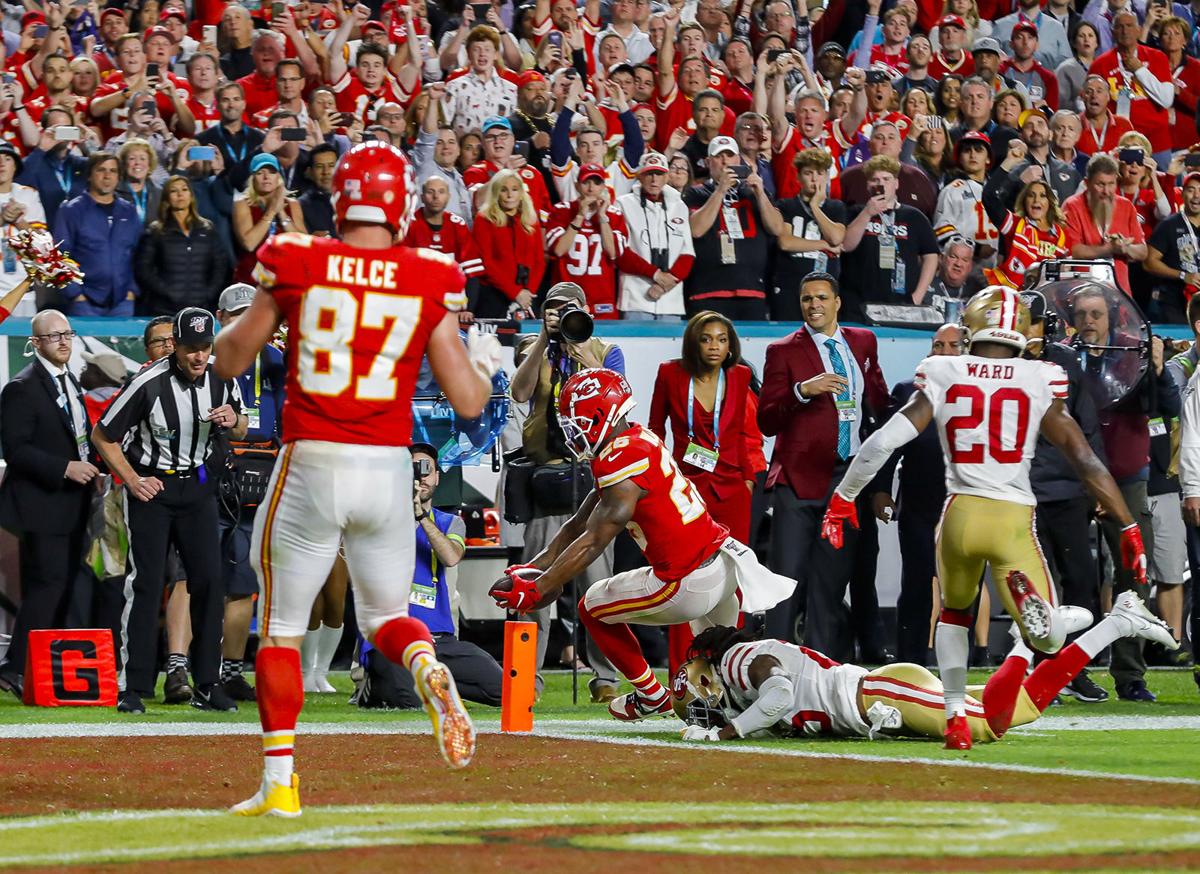 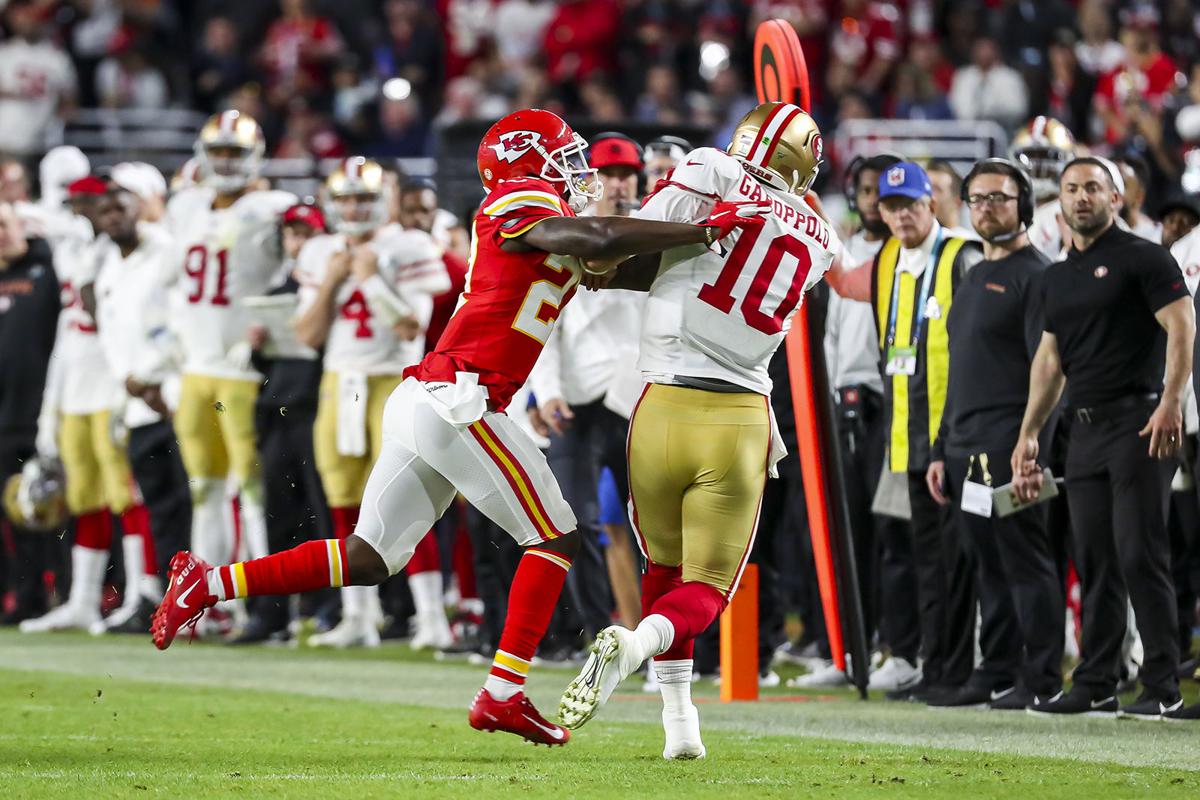 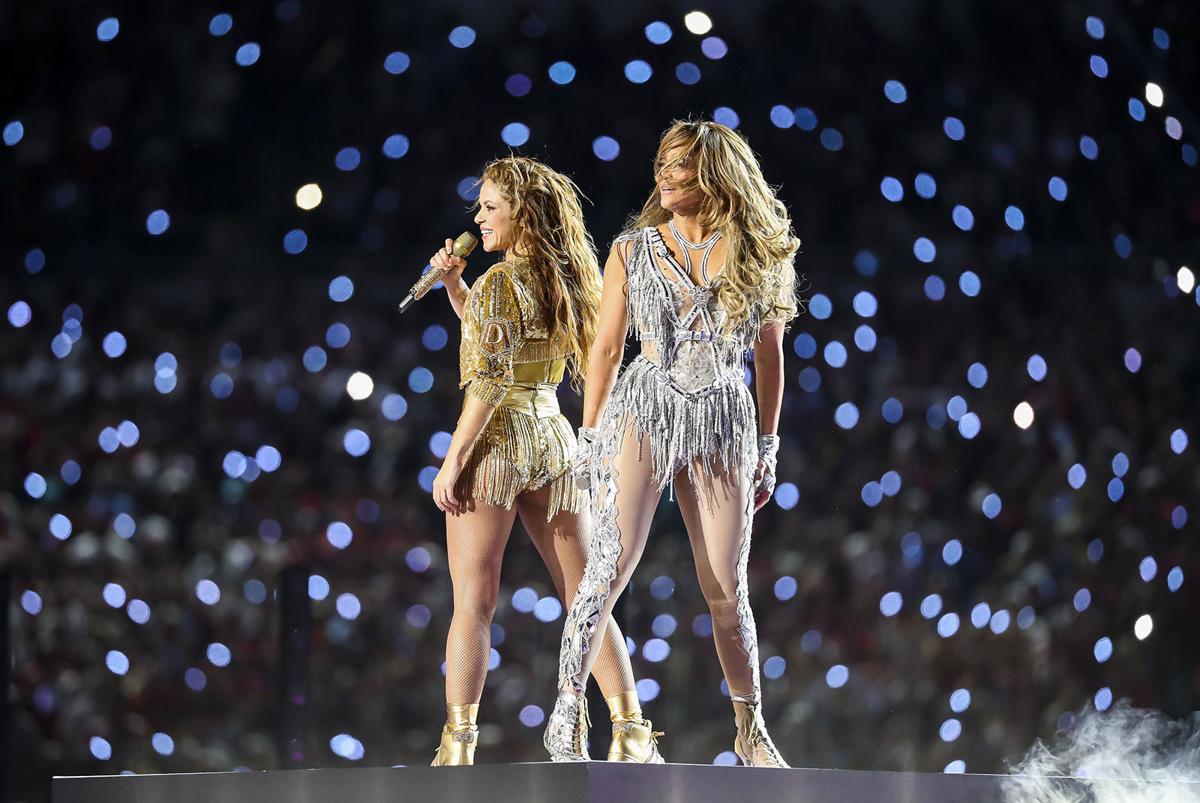 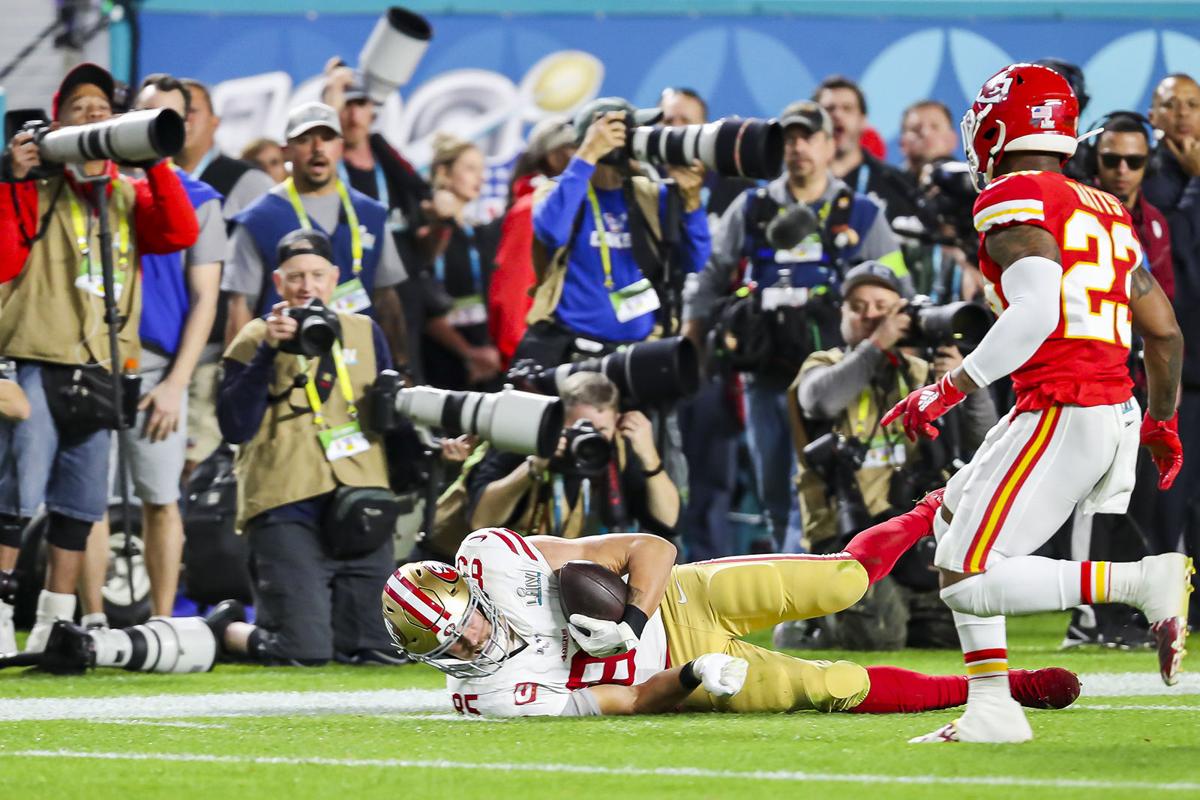 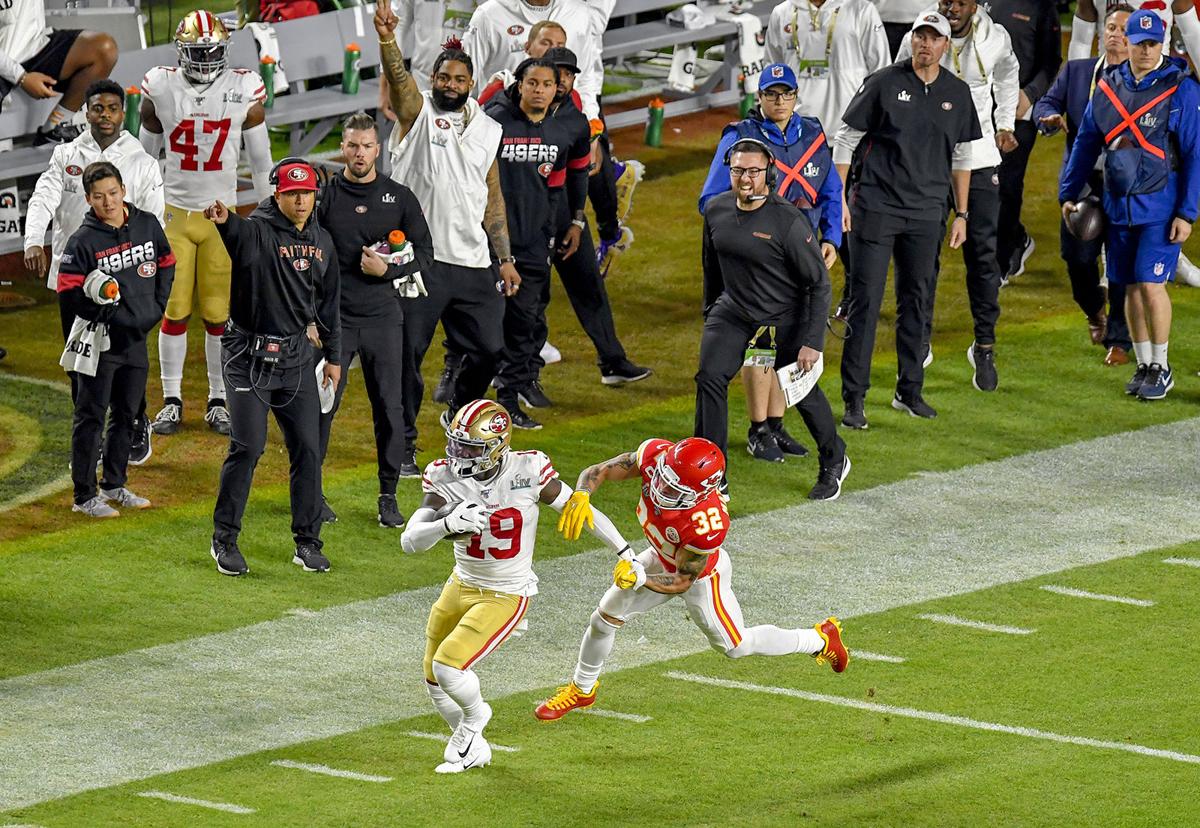 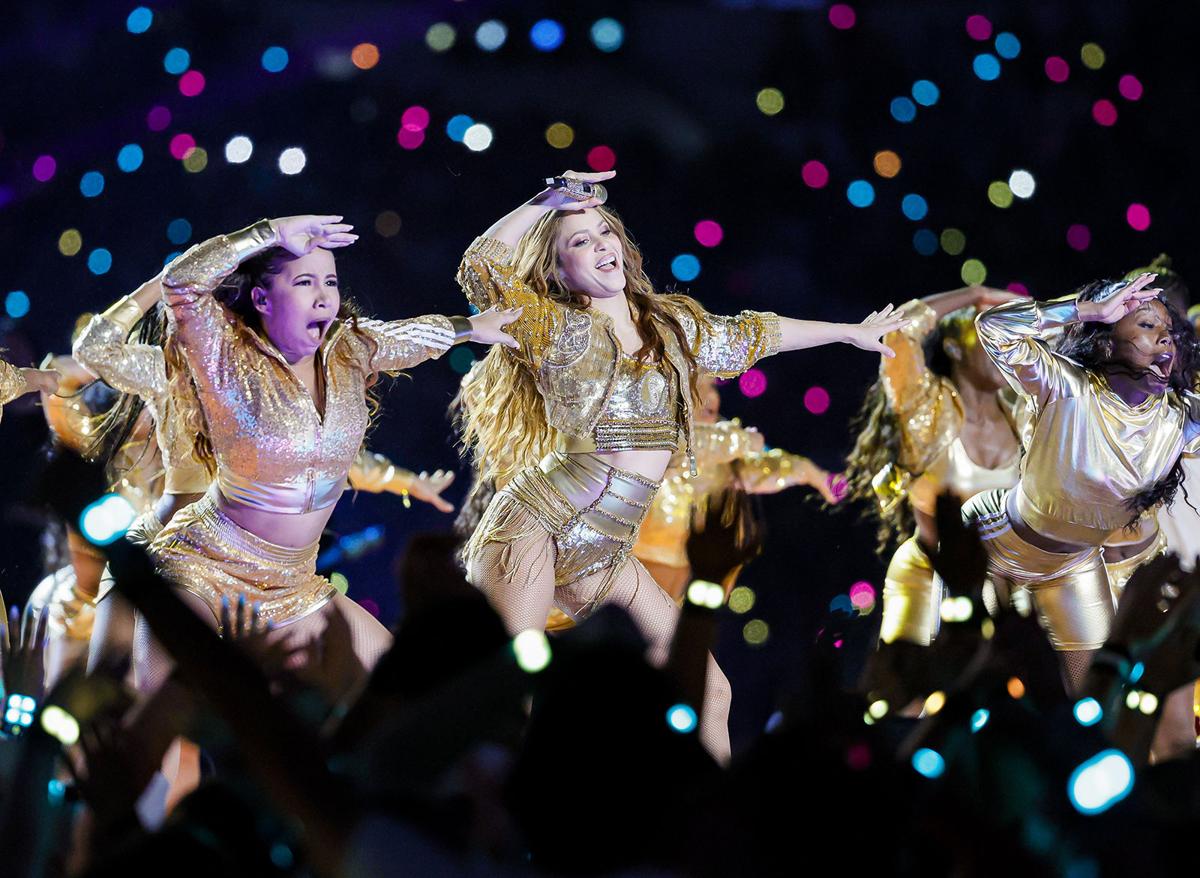 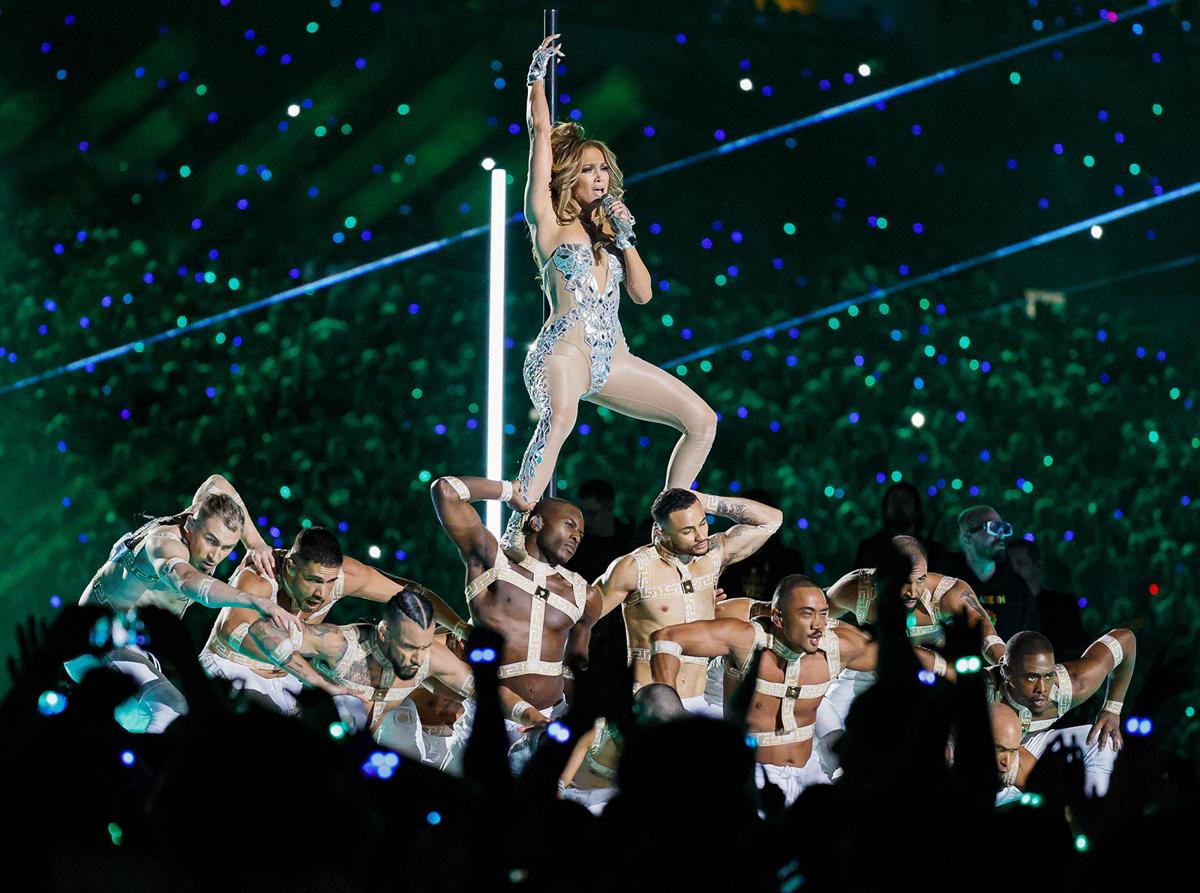 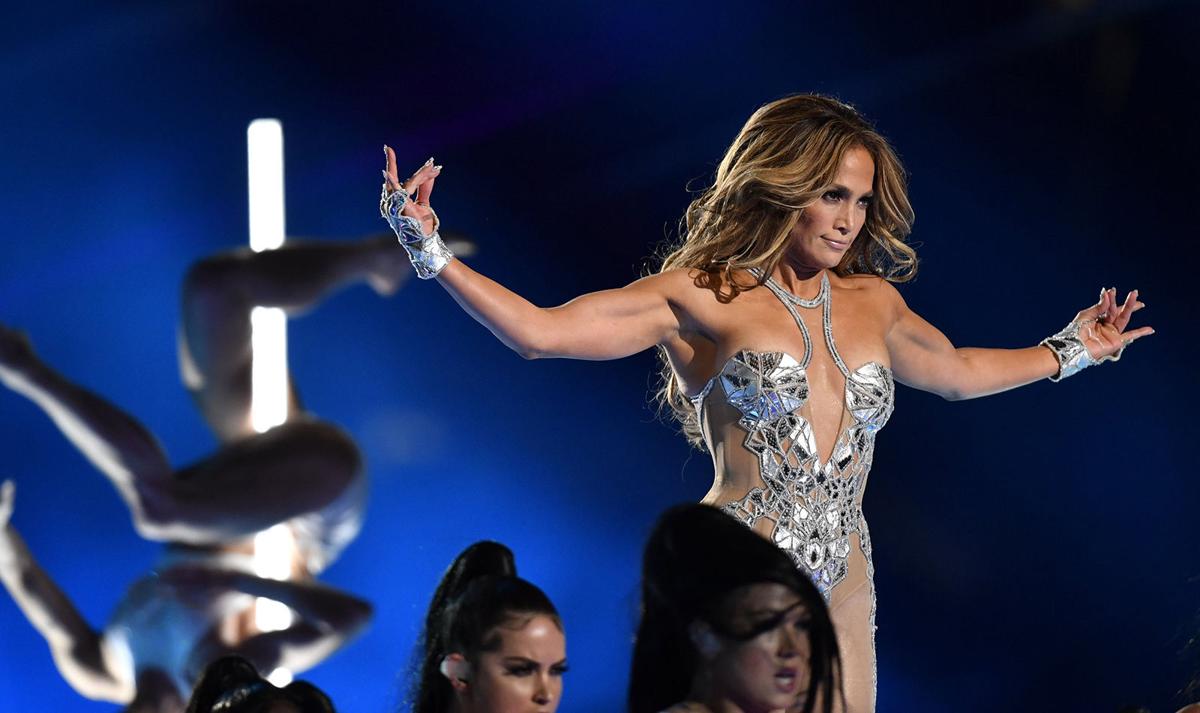 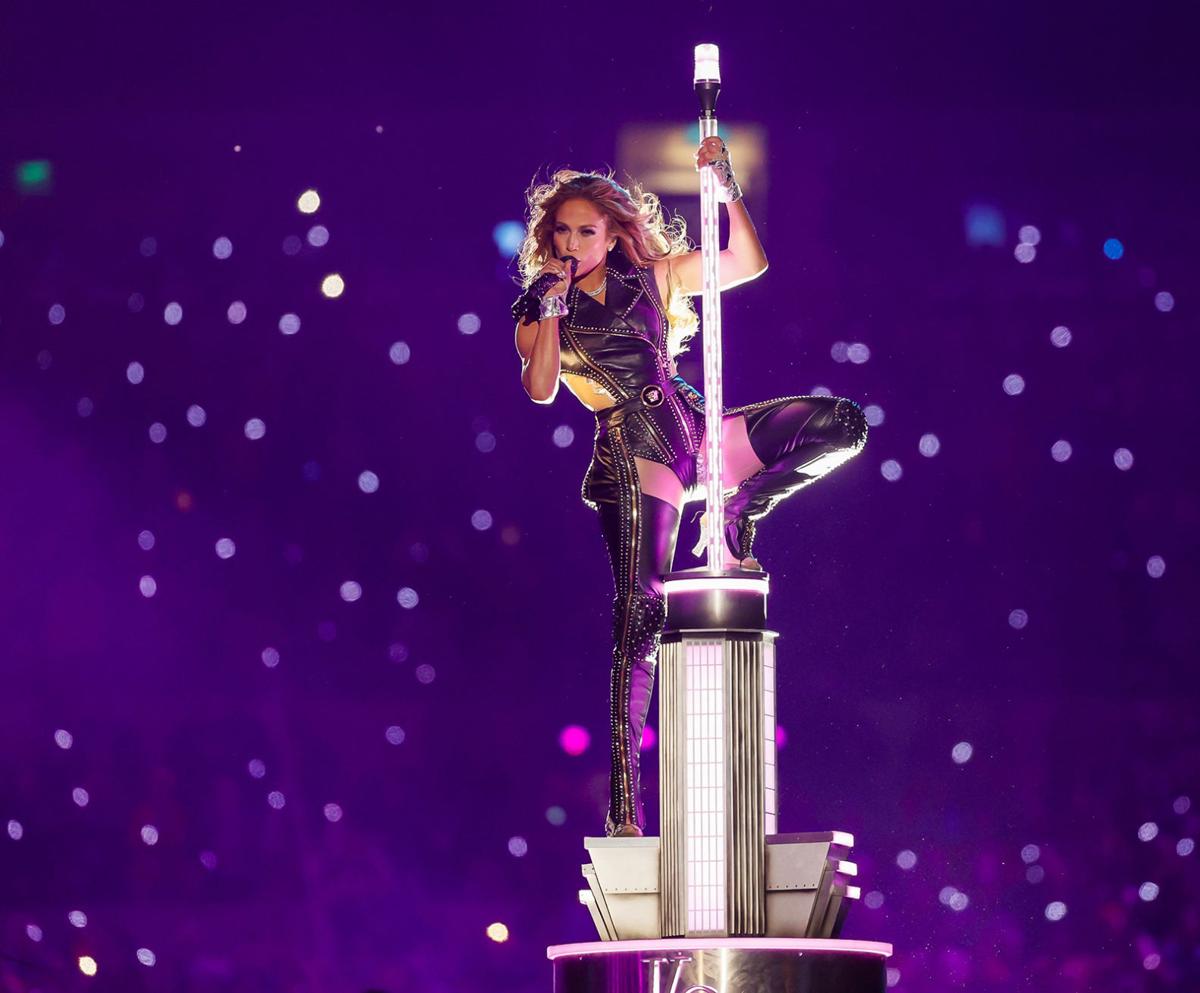 MIAMI GARDENS, Fla. - San Francisco 49ers head coach Kyle Shanahan dared the best player in the NFL to beat him by being timid and conservative, by being willing to take three points instead of pushing for seven, by choosing to burn clock instead of trying to press his advantage.

They subsequently collapsed in a dramatic and comprehensive fashion.

Shanahan and the 49ers gave Chiefs quarterback Patrick Mahomes an inch. He took so much more - he took away San Francisco's sixth Super Bowl title, leading Kansas City to its first championship in 50 years with a 31-20 win.

The 49ers' head coach came to the Super Bowl with the goal of changing his legacy. Despite being the most brilliant offensive mind in the NFL and one of the league's best head coaches, young or old, Shanahan is best known for "28-3" - the lead the Atlanta Falcons had over the New England Patriots three years ago in Super Bowl LI.

The Falcons lost that game. And Shanahan, then the Falcons' offensive coordinator, has been handed the majority of the blame.

Sunday's 20-10 scoreline won't be emblazoned on t-shirts, but the loss should be worn by the 49ers' head coach.

Maybe it's just bad luck, and, of course, it isn't all on the coach - he only calls the plays, the players must execute. His quarterback, Jimmy Garoppolo, was flustered in the fourth quarter behind an offensive line that broke down. The Niners' defense - which was controlling the contest - shattered. But Shanahan is the common denominator of two of the more shocking fourth-quarter collapses in Super Bowl history.

In Shanahan's seven career fourth-quarter drives as an offensive play-caller, his offenses are yet to score a point. On Sunday, the 49ers' first two punts of the contest arrived on their first two drives of the fourth quarter. The Chiefs took the subsequent drives and turned their 20-10 deficit into a 24-20 lead.

And yet, still, San Francisco had a chance to win the game late. They had the ball, down four, with 2:44 to play. The Niners mustered only seven plays and barely crossed midfield, turning the ball over on downs and handing the victory to Kansas City, who added another touchdown to the scoreboard when merely a first down or two would have sufficed.

"We didn't take our opportunities," George Kittle said. "I could give you every cliche in the book - we just didn't get it done."

Shanahan's play-calling in the fourth quarter will surely be parsed, dissected, and criticized by 49ers fans for years to come. But it was his larger choices - his decisions to kick two field goals instead of trying to convert reasonable fourth downs in an effort for seven points and to effectively concede a possession at the end of the first half - as to not allow Kansas City another - that will loom ever larger as time passes.

When the Chiefs failed on a third-and-long with 1:53 remaining in the second quarter of a 10-10 game. Shanahan, with three timeouts in the holster, didn't use any of them - he let the clock run.

Because of that, the 49ers didn't run their first offensive play on the subsequent series until there were 59 seconds remaining in the half.

Giving Shanahan the benefit of the doubt, the 49ers had bad field position, and the Chiefs had three timeouts and the most dangerous quarterback in the NFL - by letting the clock run out, Shanahan was ensuring that Mahomes wouldn't touch the ball again in the first half.

But the downside was obvious: any chance of the 49ers scoring was significantly limited by the lack of time on the clock. It was later eliminated by George Kittle's offensive pass interference on a 42-yard catch with six seconds remaining in the half. While replay showed that Kittle did push off on the play, the call was unquestionably pedantic.

"We should have gotten points," Shanahan said of the drive.

And while the penalty ensured that, it was Shanahan who set it up.

Shanahan sent a message with that decision - an unmistakable one: he was scared.

And while there was good reason to be - proven in the fourth quarter Sunday - you simply cannot win a Super Bowl that way.

Jets legend Mark Gastineau is still fired up about Michael Strahan surpassing his sack record almost two decades ago. Strahan currently holds the record for most sacks in a season with 22.5, just half a sack more than Gastineau's 22, which he set in 1984 with Gang Green. The play that gave Strahan the sack record wasn't your typical sack on a quarterback. Then-Packers quarterback Brett Favre ...

CHICAGO (AP) — A former University of Wisconsin football player who is the brother of a standout in the 2011 Super Bowl surrendered to Chicago police on Saturday in connection with the deaths of two people who were found with gunshot wounds on a road in Janesville, Wisconsin.

TAMPA, Fla. - When you throw 30 interceptions in a season and squint a lot as a quarterback, the question is going to continue to come up. Is something wrong with Jameis Winston's eyesight? "He can't read the scoreboard but he can see the guys in front of him," Bucs head coach Bruce Arians said in the final press conference of 2019. "So he's all right." Apparently, all right wasn't good ...

Antonio Brown is talking about a possible return to the Raiders? Somebody say it ain't so. Anybody. But sure enough, our favorite dysfunctional wide receiver said he spoke with Raiders coach Jon Gruden on Wednesday. "I just talked to Jon Gruden today, might I say," Brown said on Complex's "Load Management" podcast. "I don't know how it's going to go, but who knows? If they want to bring it ...

FRISCO, Texas - Dallas Cowboys' Hall of Fame receiver Michael Irvin wants one thing known about the Dak Prescott-Tom Brady rumors that he inflamed over weekend: "just cause he repeated it, doesn't mean he believes it." Irvin, who now works for the NFL Network, not so innocently commented on a Boston radio station late last week about the possibility of the Cowboys swapping out Prescott for ...

EAGAN, Minn. (AP) — After a smooth first year as an offensive adviser for the Minnesota Vikings, Gary Kubiak was presented with the opportunity to rediscover his play-calling acumen.

Browns meet with Hunt, OBJ, tell them to watch behavior

Kansas City Chiefs head coach Andy Reid reacts as players shower him on the sidelines at the conclusion of a 31-20 win against the San Francisco 49ers in Super Bowl LIV at Hard Rock Stadium in Miami Gardens, Fla., on Sunday, Feb. 2, 2020. (David Santiago/Miami Herald/TNS)