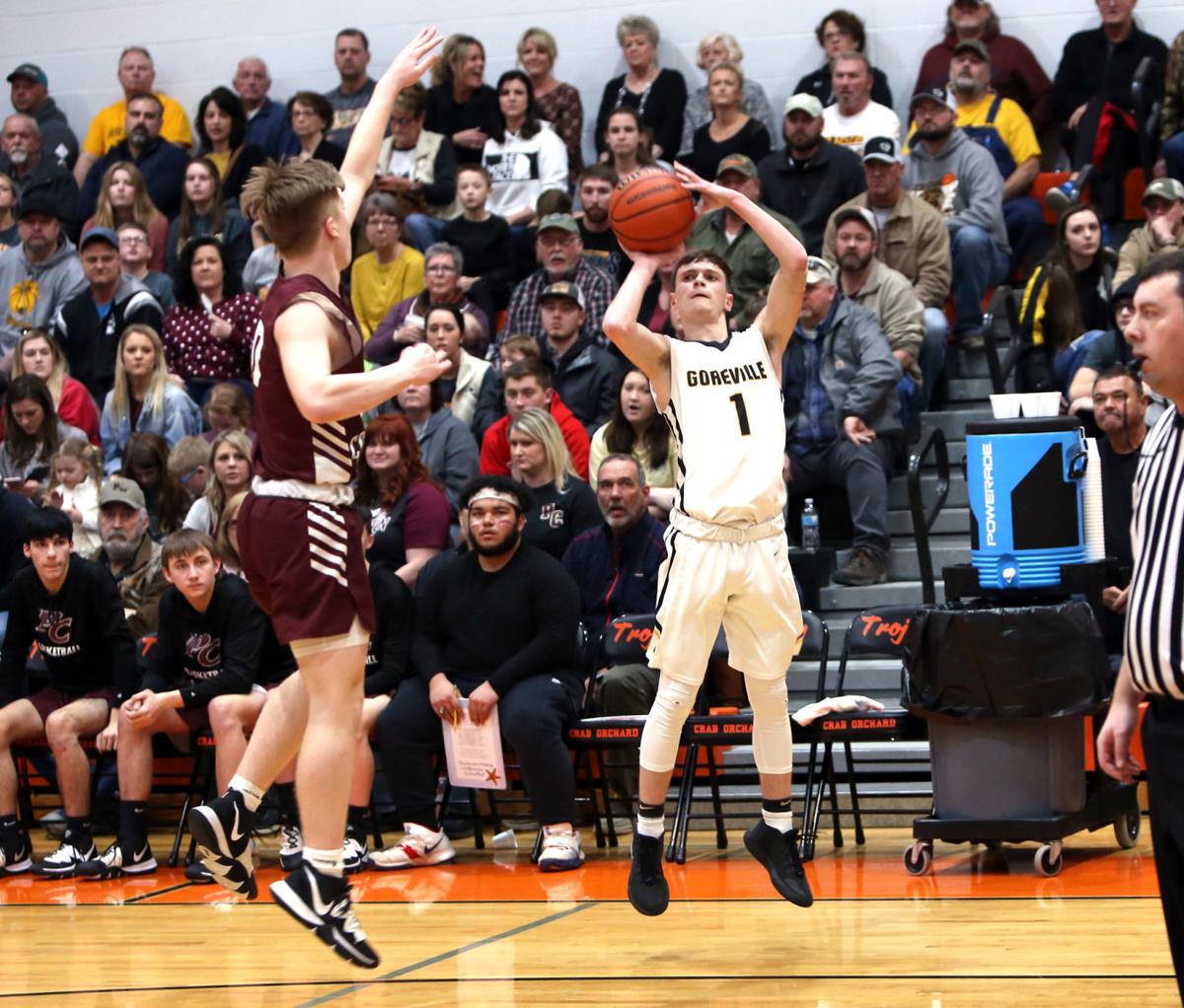 Goreville's Luke Brown takes a 3-pointer during the first half of the championship game of the Class 1A Crab Orchard Regional. 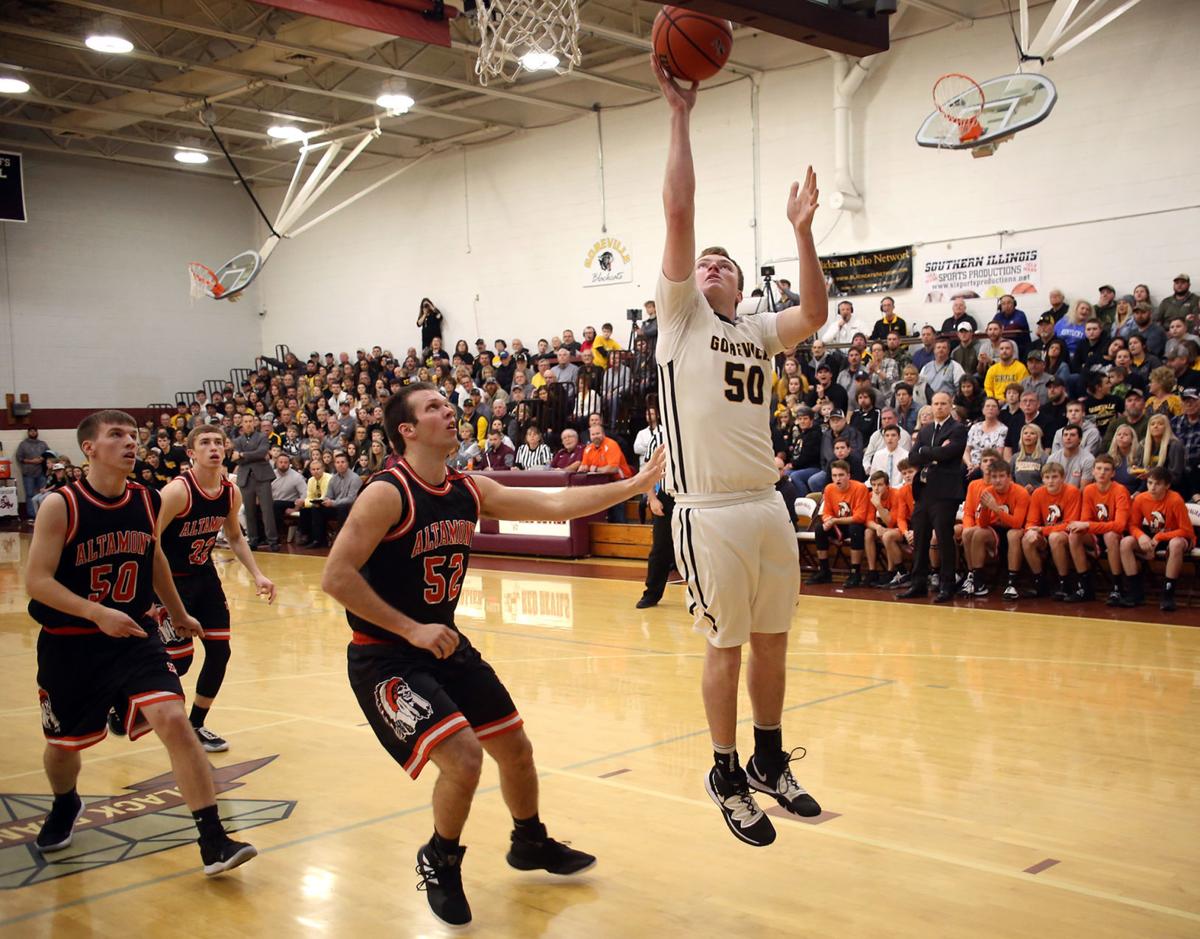 Goreville's Landon Albright takes a shot during the championship game of the 39th annual Sesser-Valier Holiday Tournament in Sesser. 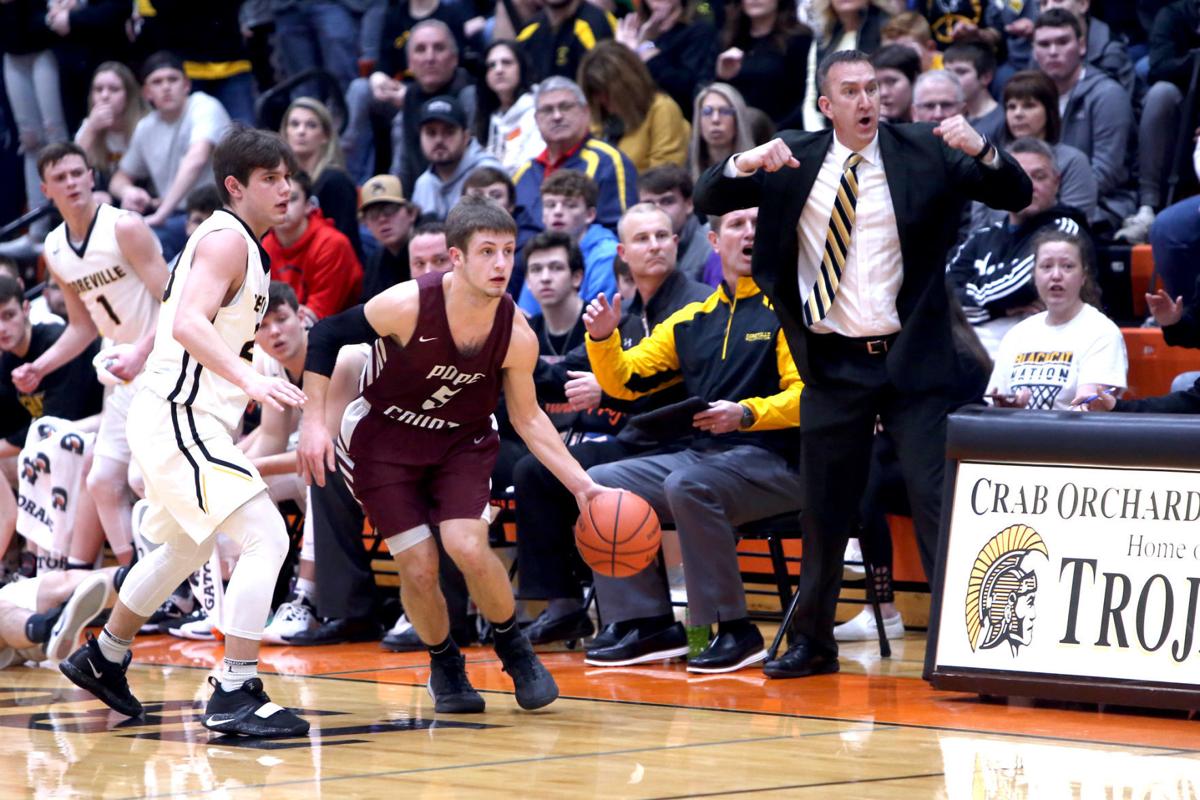 Goreville coach Todd Tripp looks for a call against Jackson Eddington during the first half of the championship game of the Class 1A Crab Orchard Regional.

For Goreville basketball coach Todd Tripp, there was one bit of good news to come out of the last week.

His wife, Sarah, won the Republican primary Tuesday for a First Judicial Circuit seat from Johnson County. Earning 49% of the vote in a three-person race, Sarah Tripp is likely to run unopposed in November’s election and earn a six-year term.

“It was just a good feeling to see her come out on top,” Todd Tripp said Friday morning. “It’s been a very hectic winter for our family for sure. Finishing off what we started made you feel really good.”

That stands in stark contrast to Todd’s team, which didn’t get that same opportunity. Citing COVID-19 concerns, the Illinois High School Association canceled the State Series on March 12, just hours before the Blackcats were to meet Roanoke-Benson the next day in the Class 1A semifinals at Peoria Civic Center.

The news was gut-wrenching to all eight teams — four in 1A, four in 2A — that made the trip. It was especially difficult for a Goreville team squad that felt it had the savvy, talent and guts to beat the state’s best teams and bring the first-place plaque back to Southern Illinois.

And just over a week after learning their careers would end with getting to play on the big floor with the games on statewide TV, Blackcat seniors such as Luke Brown and Landon Albright still play the what-if game in their heads.

“I watched film on some of the other teams up there and they deserved to be up there for a reason, but I felt like we were going to bring it home,” said Brown, the team’s point guard. “I’m sure it’s going to take a while to get over it.”

Had the day not ended with the team’s main goal being quashed before they could play Roanoke-Benson, Thursday, March 12, would have still ranked as an unforgettable day for Goreville.

There was the early-morning bus ride from school to Peoria, where the team got in a shootaround, took pictures and did TV interviews at the 11,442-seat arena. Even as one pro league after another suspended play and NCAA conference tournament were canceled left and right, Albright still believed the IHSA would enable the teams to play for a title.

“When we were in the arena, we forgot about that world,” said Albright, the team's leading scorer. “We were focusing on playing basketball.”

The IHSA holds a meeting at 6 p.m. every Thursday before the state tournament for the participating teams. It’s to go over expectations and welcome school administrators to the event. A few minutes before that meeting, word got out at social media that the tournament was going to be canceled.

Brown was one player who knew what was about to go down before Tripp could tell his teammates at a team meeting.

“I just stayed quiet and kept my head in my shirt,” he said. “I was so devastated that I couldn’t process the words. Our ultimate goal was ripped from us.”

The team boarded the bus again the next day for a somber ride home that Albright called the quietest he’d been on in his life. Instead of celebrating the end of the most successful season in school history — they won 35 games and reached the 1A semis for the second time in three years — they headed home wondering what might have been.

And now, with schools closed until at least early April and a shelter-in-place order declared by Gov. Pritzker, there’s more time to peruse what might have happened. There’s also a thought that’s crossed Brown’s mind as circumstances grow more dire.

“If canceling the state tournament means one person in Goreville didn’t wind up with it,” Brown said of coronavirus, “I’m 100% behind it.”

Liz Jarnigan knew there would be some challenges when she took over for Jerry Kill as SIU's athletic director last year, but no one saw this coming.

Goreville's Luke Brown takes a 3-pointer during the first half of the championship game of the Class 1A Crab Orchard Regional.

Goreville's Landon Albright takes a shot during the championship game of the 39th annual Sesser-Valier Holiday Tournament in Sesser.

Goreville coach Todd Tripp looks for a call against Jackson Eddington during the first half of the championship game of the Class 1A Crab Orchard Regional.