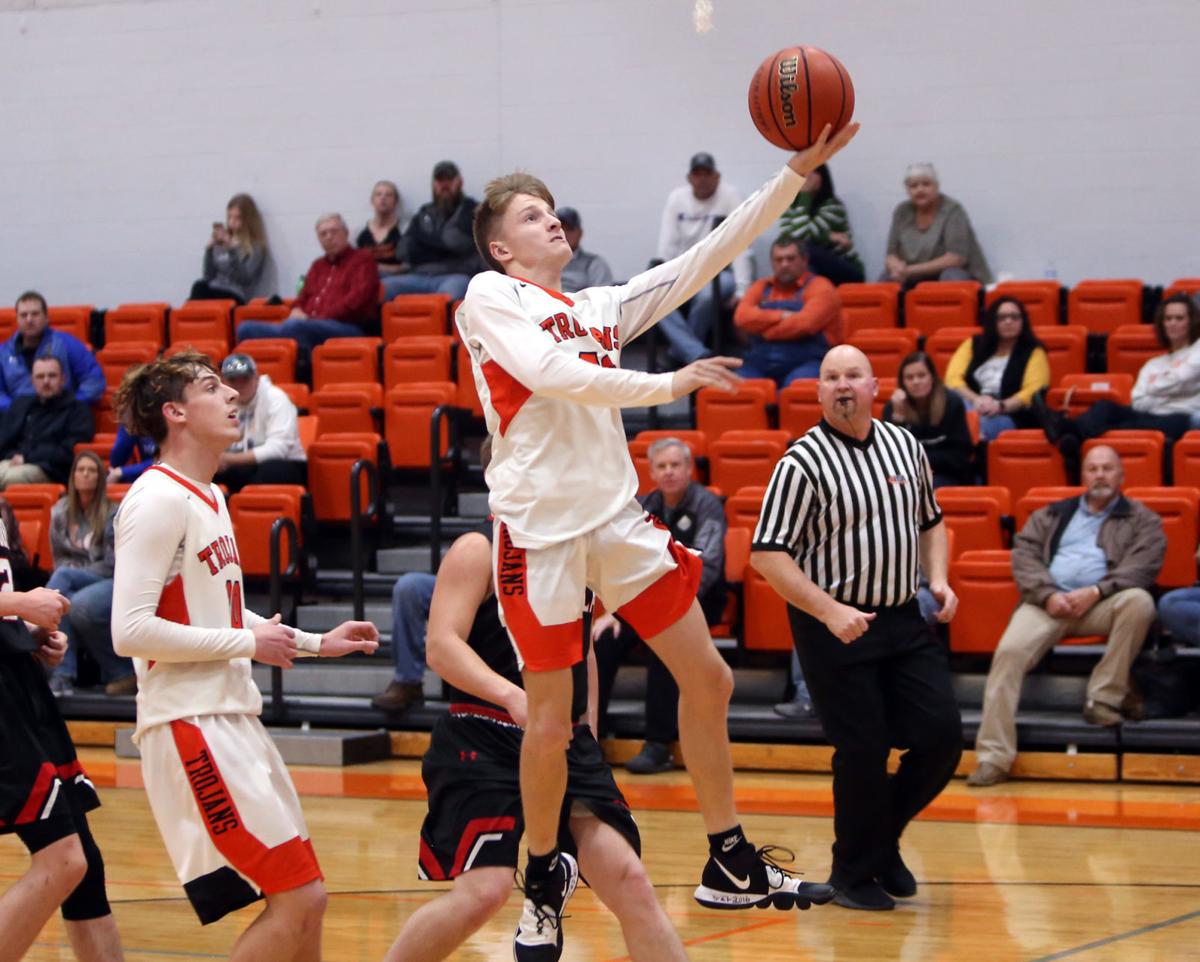 Crab Orchard's Tony Lakotich goes in for a layup during Saturday's action at the 21st annual Crab Orchard Turkey Tournament. 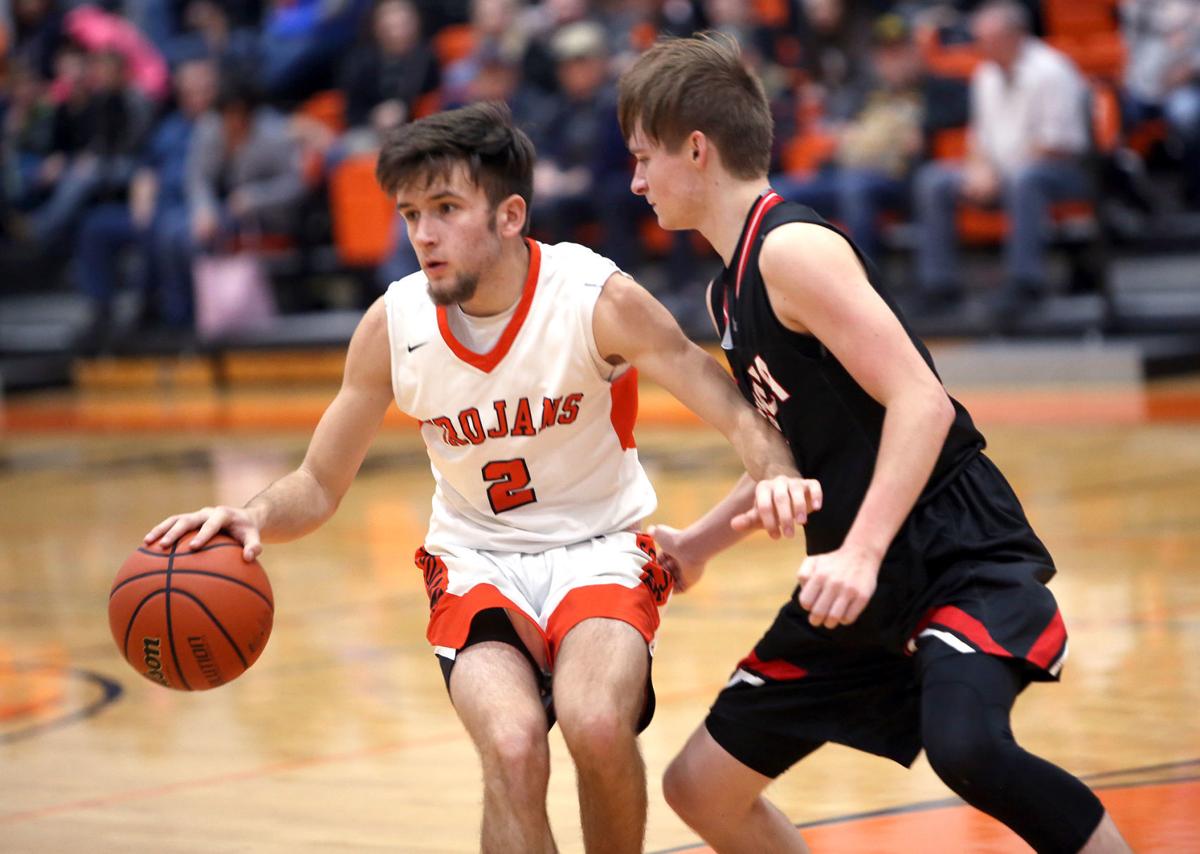 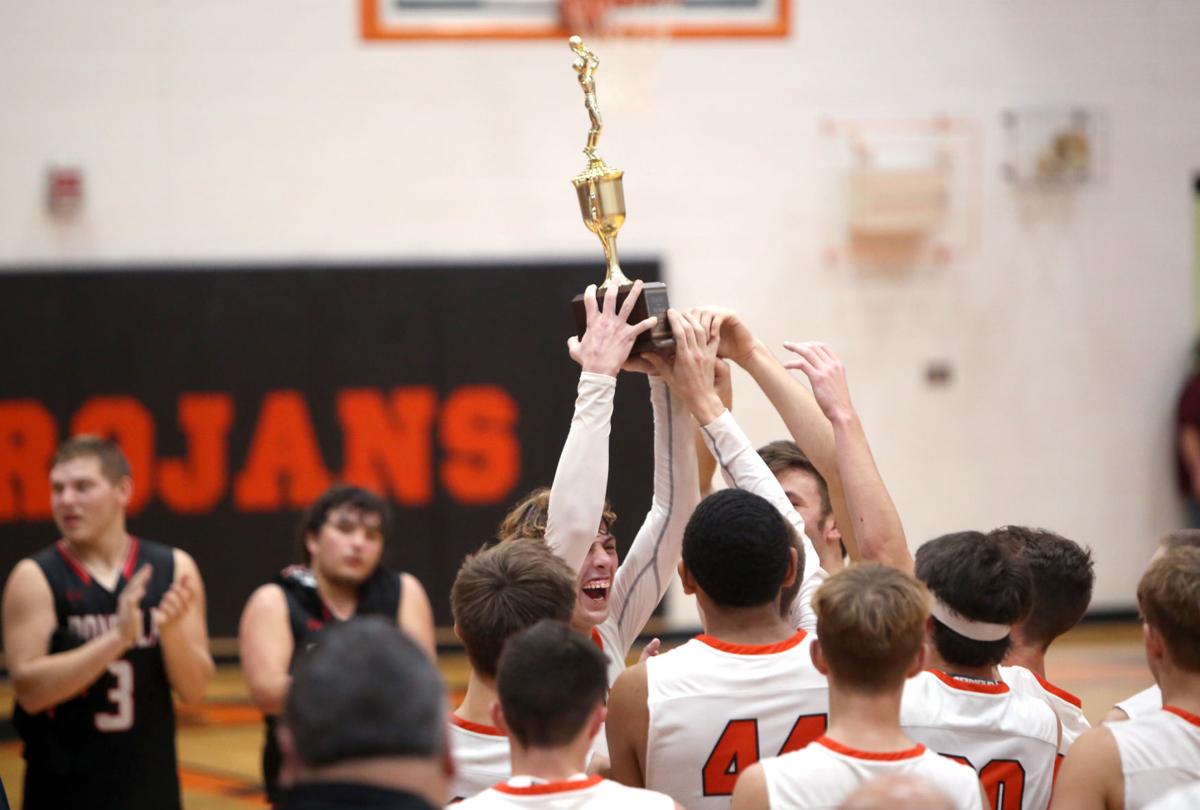 Crab Orchard's Kegan Peek lifts the championship trophy after the Trojans won their own 21st annual Crab Orchard Turkey Tournament with a win over Dongola on Saturday. 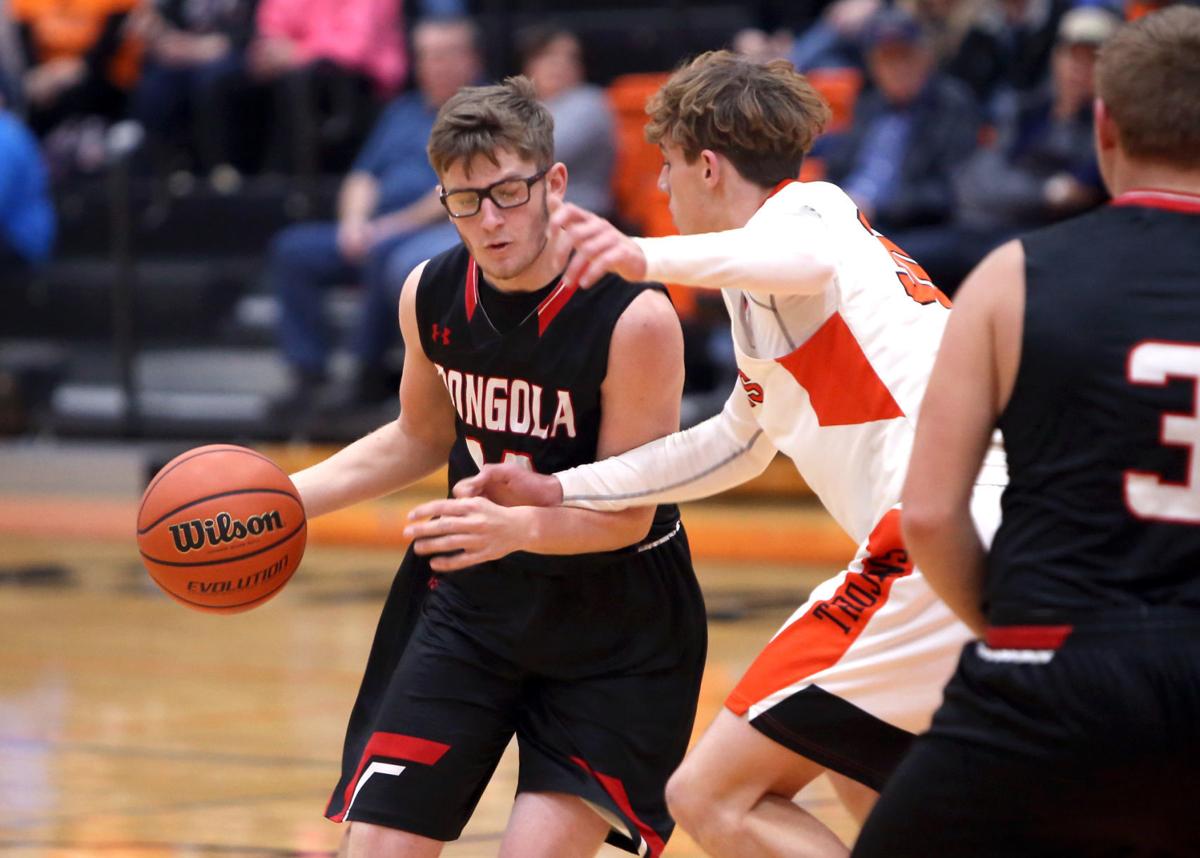 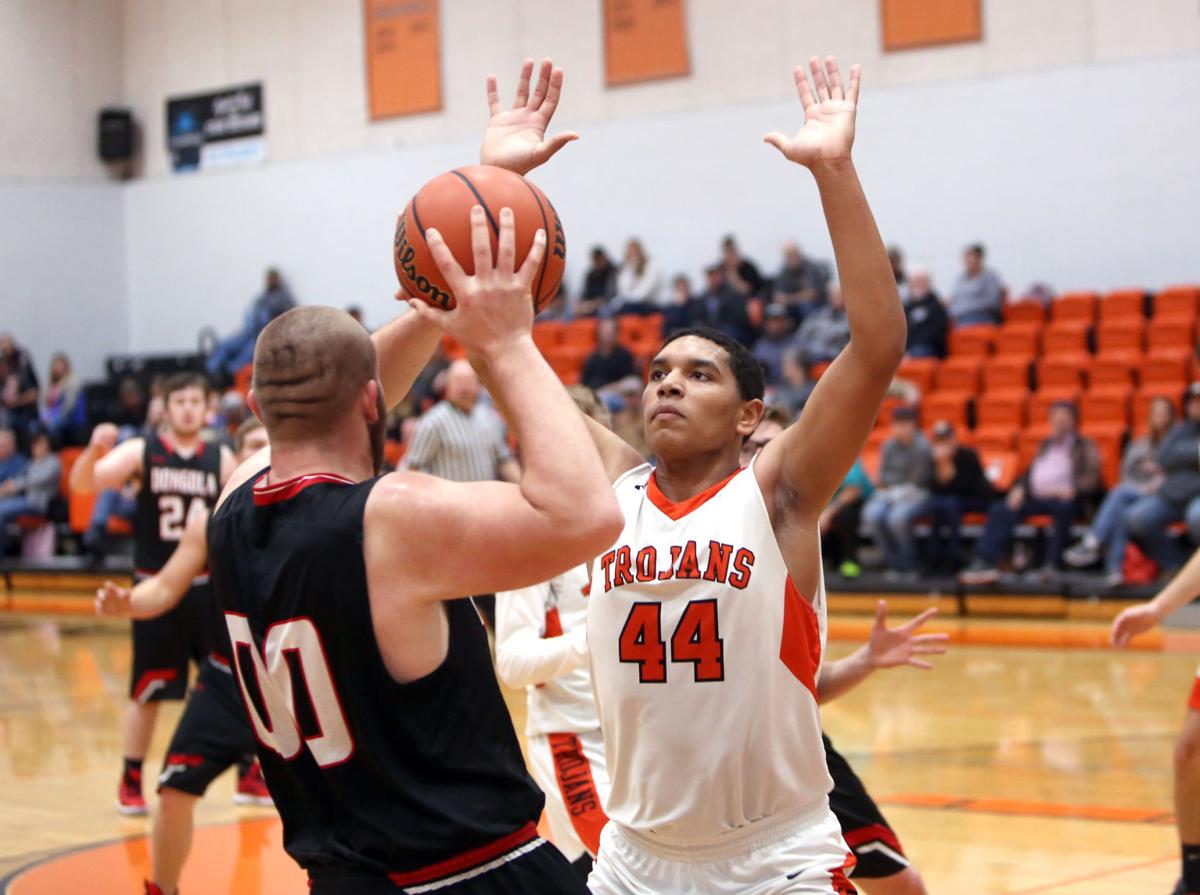 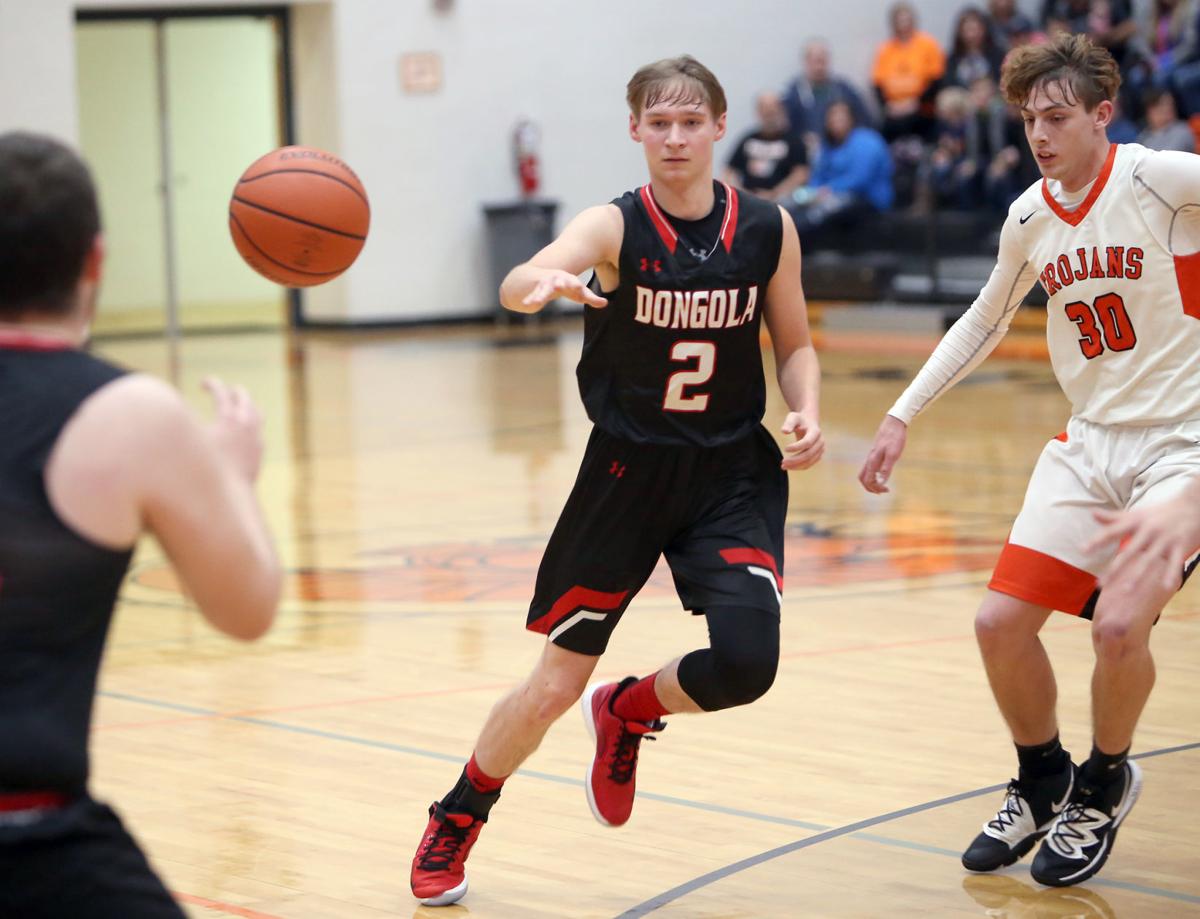 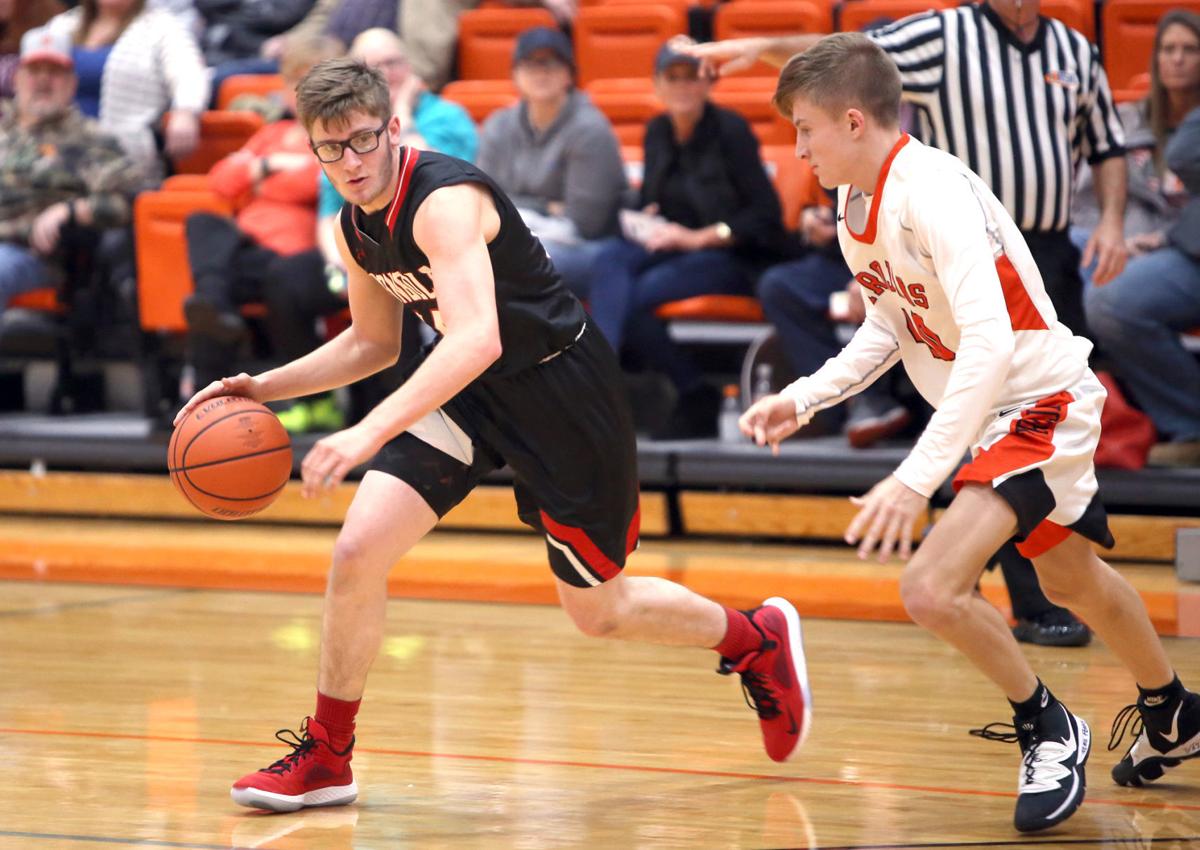 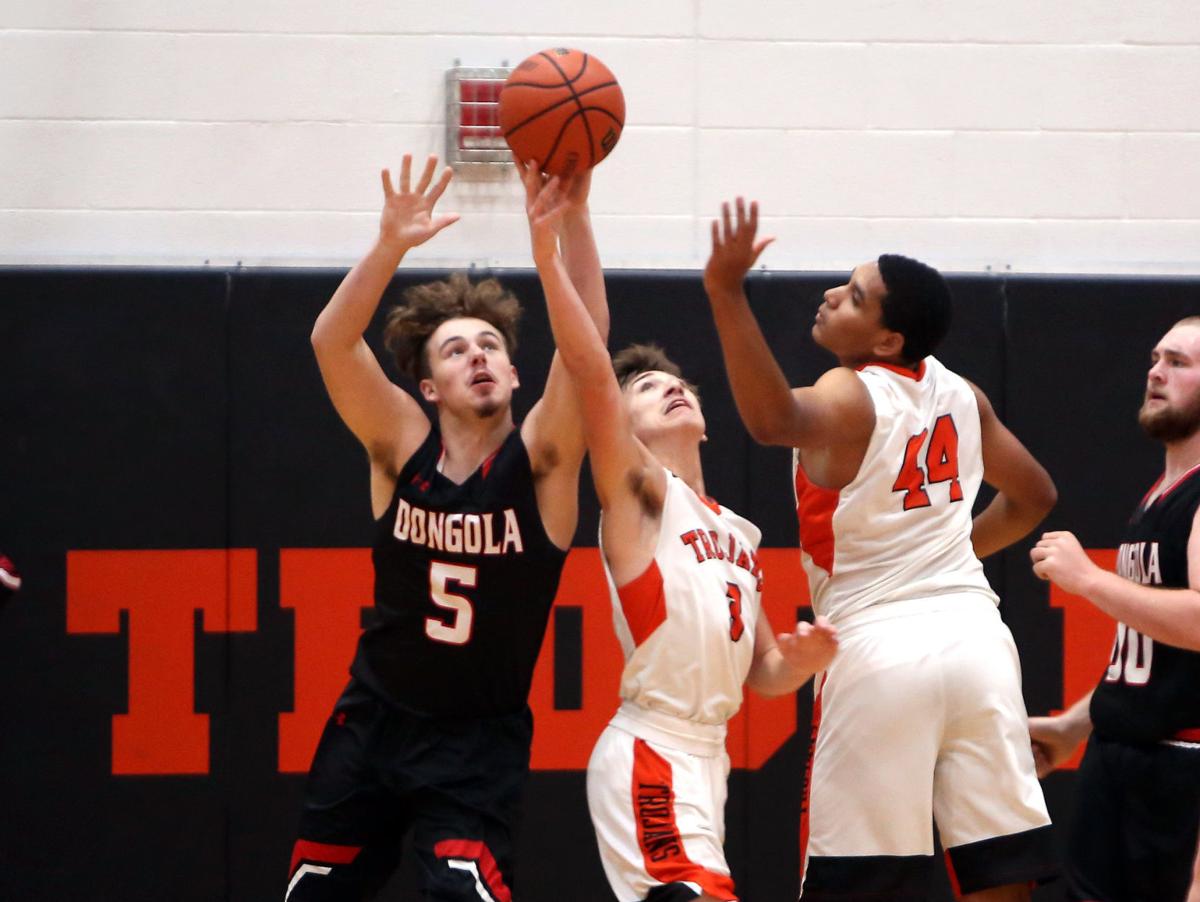 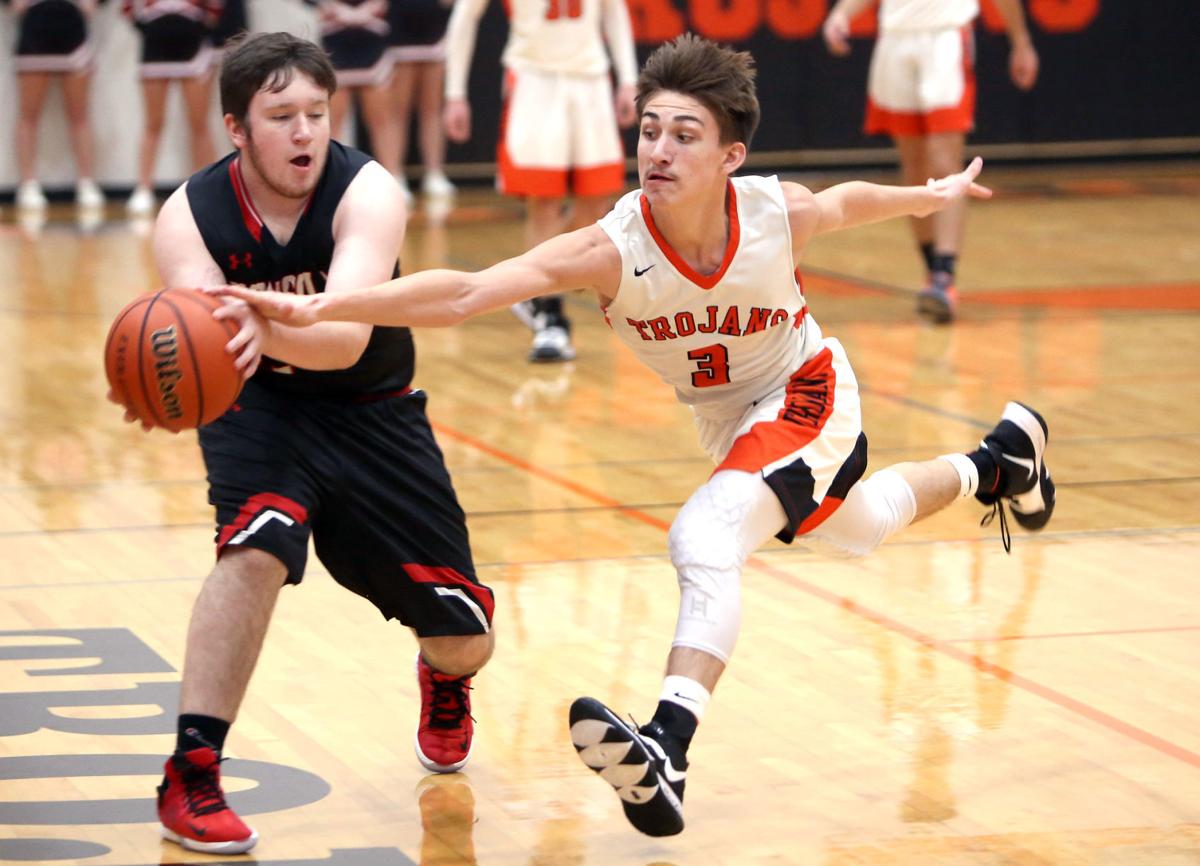 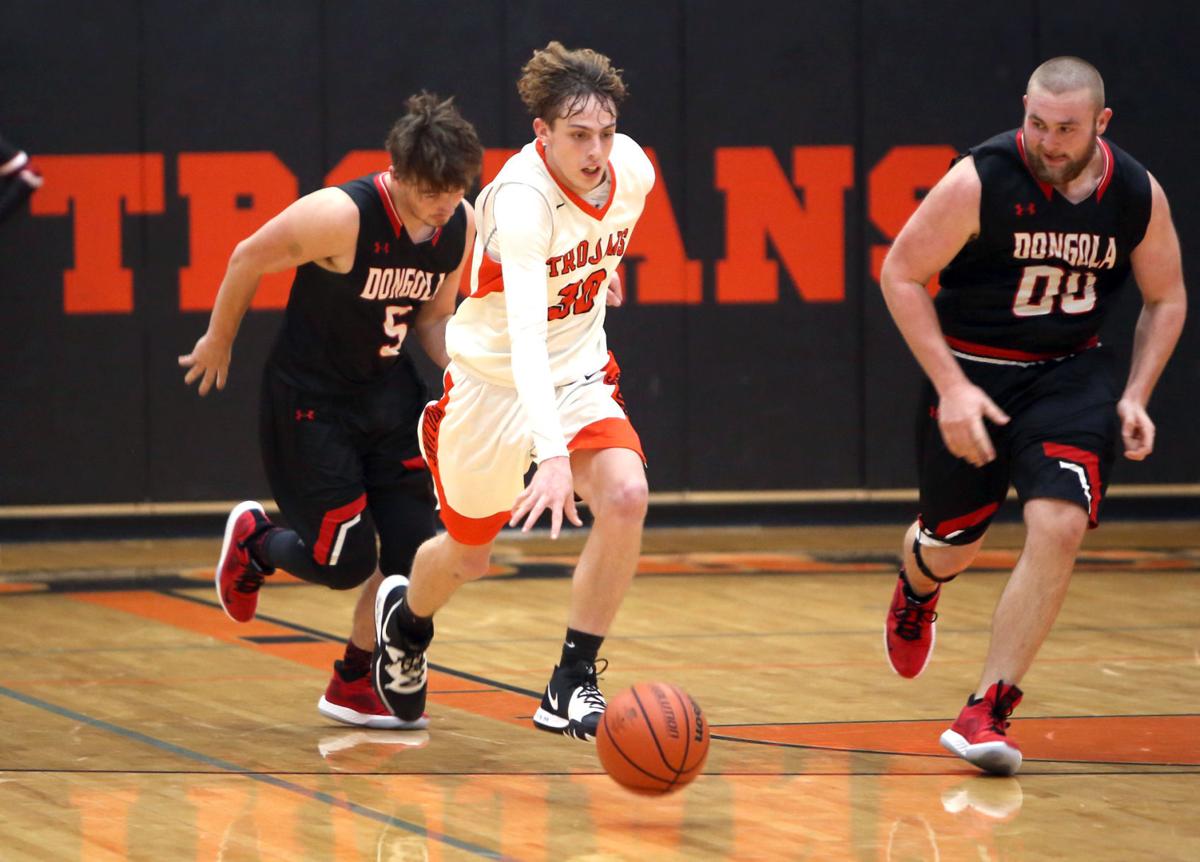 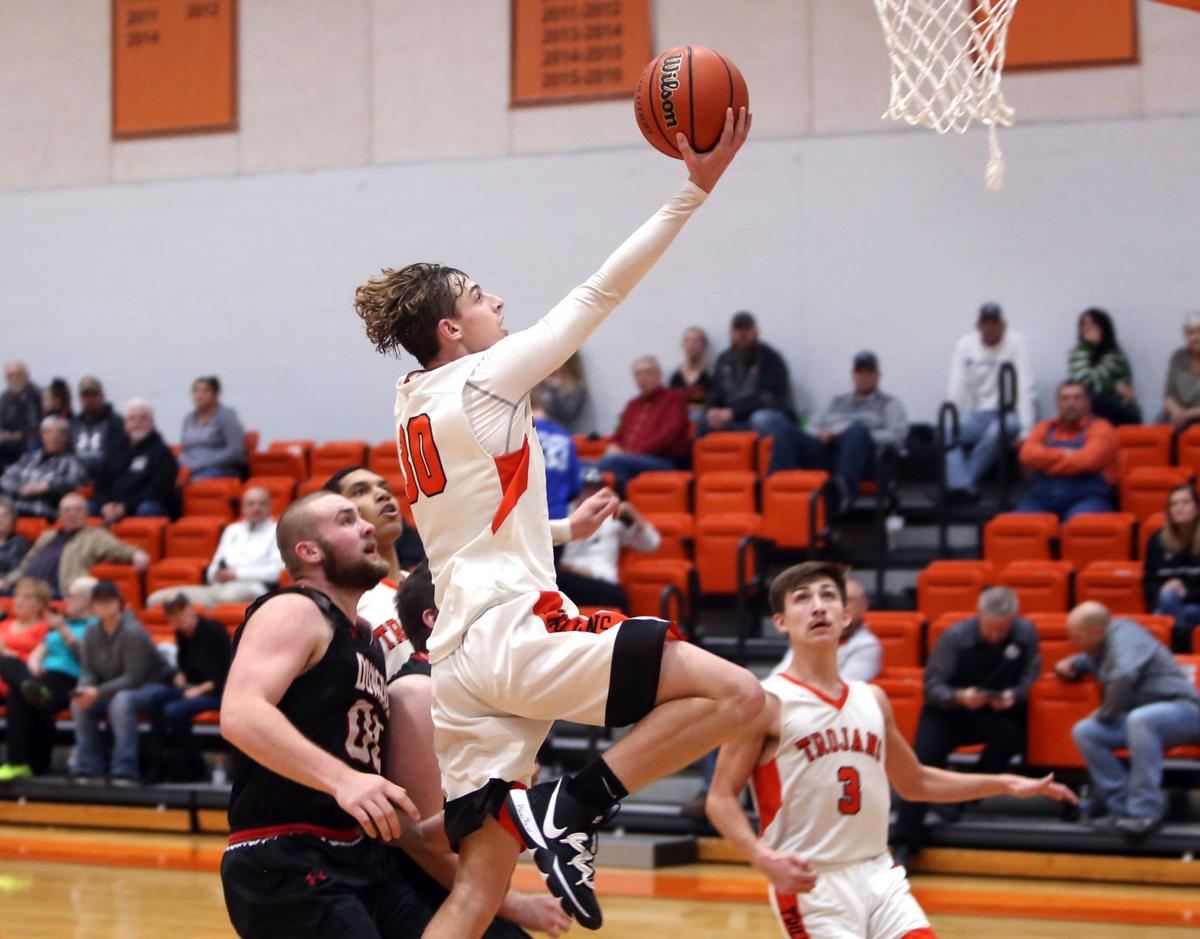 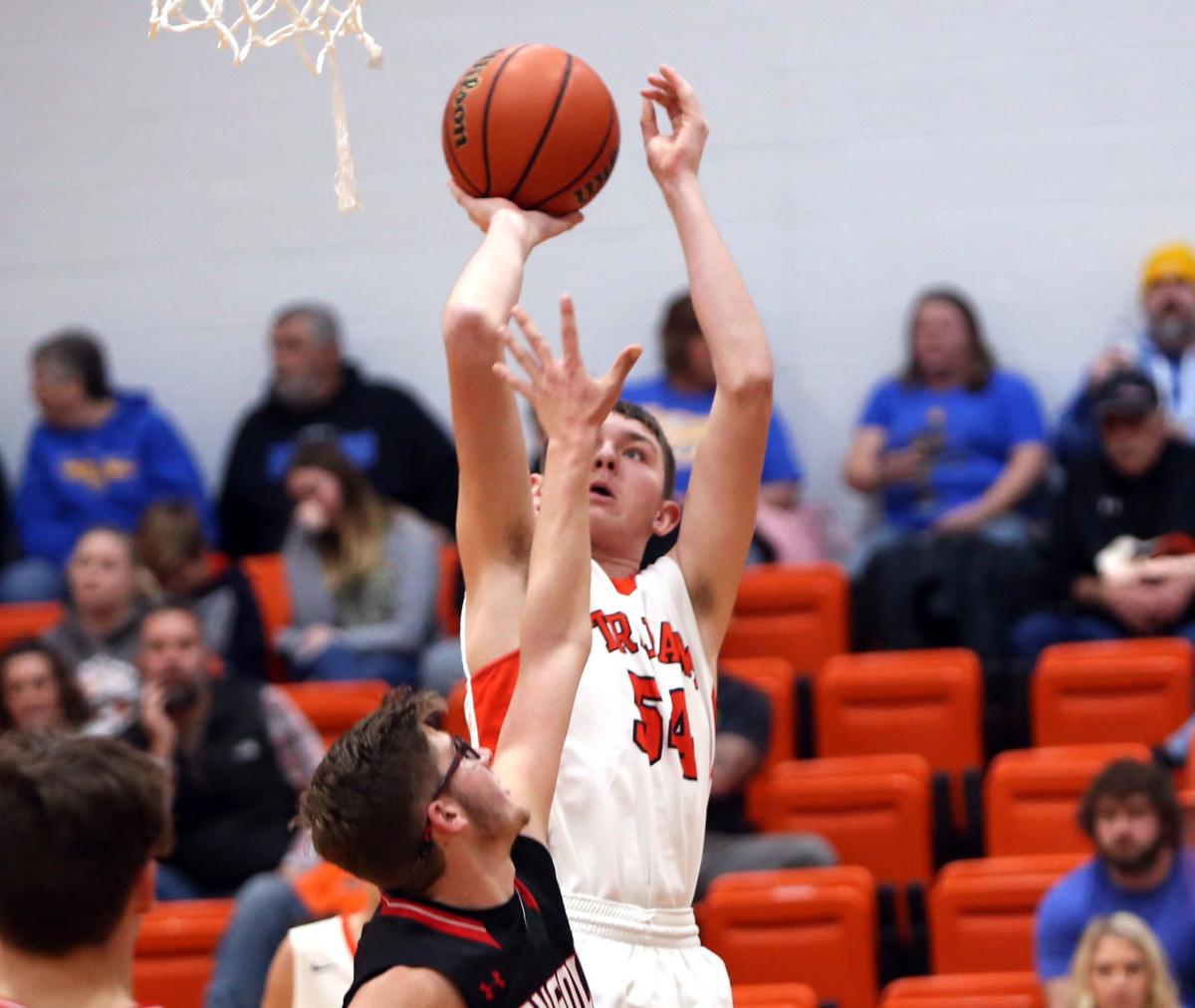 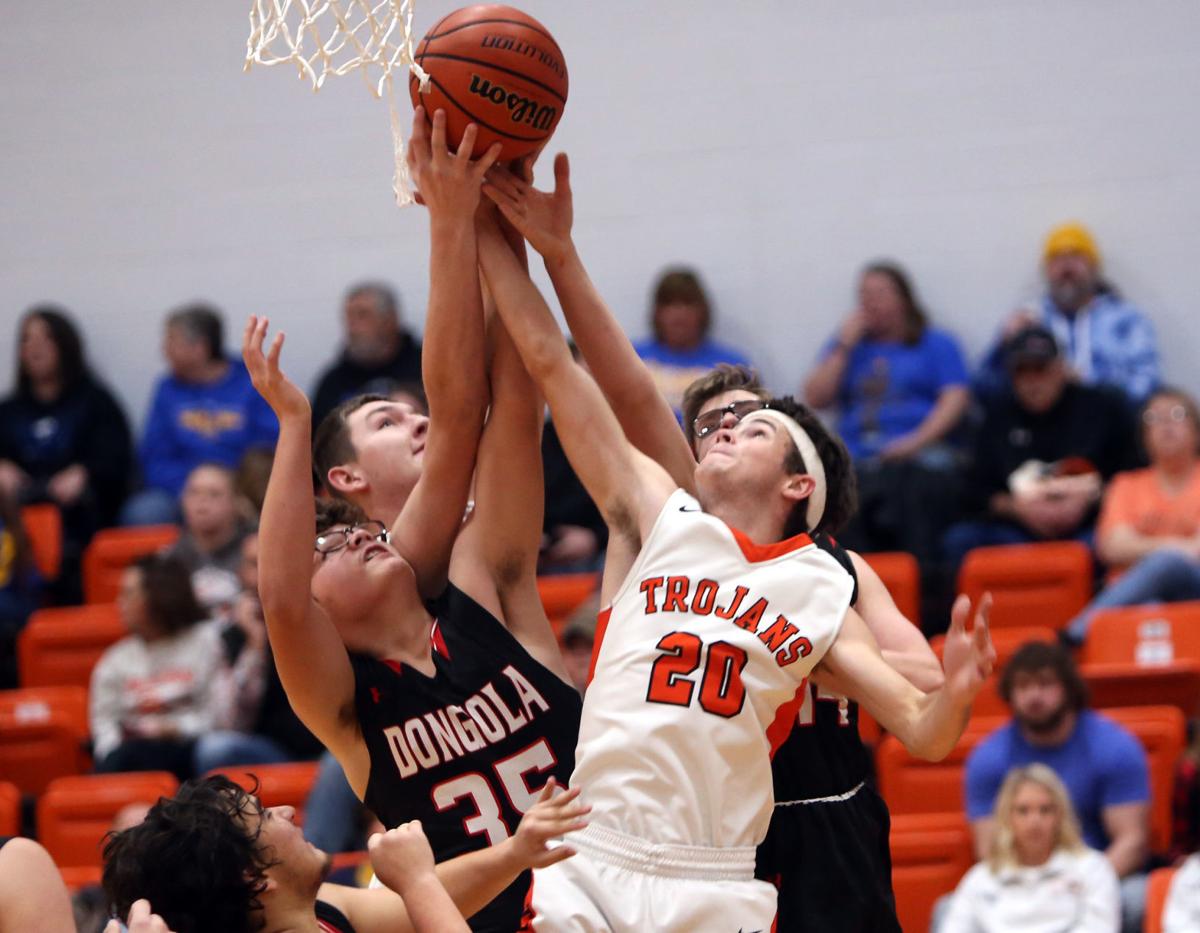 CRAB ORCHARD — Crab Orchard boys basketball coach Jon Brown made up a new word not in the dictionary to describe his team's play in both Saturday's game and the 21st annual Crab Orchard Turkey Tournament overall.

"We played pretty well, but we were spurty," Brown said after the Trojans rolled to a 77-46 win over Dongola to complete a five-game tourney sweep. "I thought our intensity wasn't there today like it needed to be. I'm hoping we can get refreshed. We have NCOE on Tuesday and that will be a huge test."

You can't blame Brown for looking ahead. But after watching Elverado take home the championship trophy last season, the Trojans kept it at home again with wins over Elverado, Pope County, Egyptian, Joppa and finally Dongola.

The Trojans hit four 3-pointers in the win but aren't your typical Crab Orchard gun-slinging type of team. Brown's squad this year likes to push the ball and tempo as fast as possible.

"We have a little more size," Brown explained. "We'll try to attack the rim more off the dribble."

Throgmorton converted a putback to give the Trojans a 21-8 lead at the end of the first quarter. Peek had nine points and Throgmorton had seven in those opening eight minutes.

Dongola didn't led the Trojans completely run it out of the gym, however, and consecutive layups by Joey Thomas helped cut the margin to 38-20 at halftime. The Demons also finished the third frame strong with 3-pointers by Cameron Hogue and Colin Hall, but still trailed by 20 points at 55-35.

"We had a relatively short bench so the wheels wore down," said Dongola first-year coach Sean Lasley. "You know Crab is going to run and shoot the ball and crash the boards. You expect them to push the pace so you just try to limit it as much as you can.

"Crab is one of those types of teams that plays the same way all the time. So you just do what you can."

It was the start of the third quarter that Brown liked the most. Peek scored 10 of his points in the period as the Trojans pushed the lead out before the Demons' closing treys.

"We had a nice run in the third with some energy and got into a flow," Brown said. "But we just struggled to get in that flow most of the day."

Thomas finished with 12 points and Evan Treat had 11 for the Demons, who avoided the running clock until Crab Orchard freshman Robbie Rooker hit a pair of free throws with 2:51 left to make it 74-43.

Dongola, despite playing with between seven and nine players, finished the tournament with one win and four losses, including a one-point overtime loss to Elverado.

"We play in spurts, and it seems like we would make a bit of a push and they'd hit a big shot or get an offensive rebound," Lasley said. "The wheels just kind of came off, and we ran out of energy there at the end. When you play five games in six days it happens like that sometimes."

Crab Orchard's Tony Lakotich goes in for a layup during Saturday's action at the 21st annual Crab Orchard Turkey Tournament.

Crab Orchard's Kegan Peek lifts the championship trophy after the Trojans won their own 21st annual Crab Orchard Turkey Tournament with a win over Dongola on Saturday.