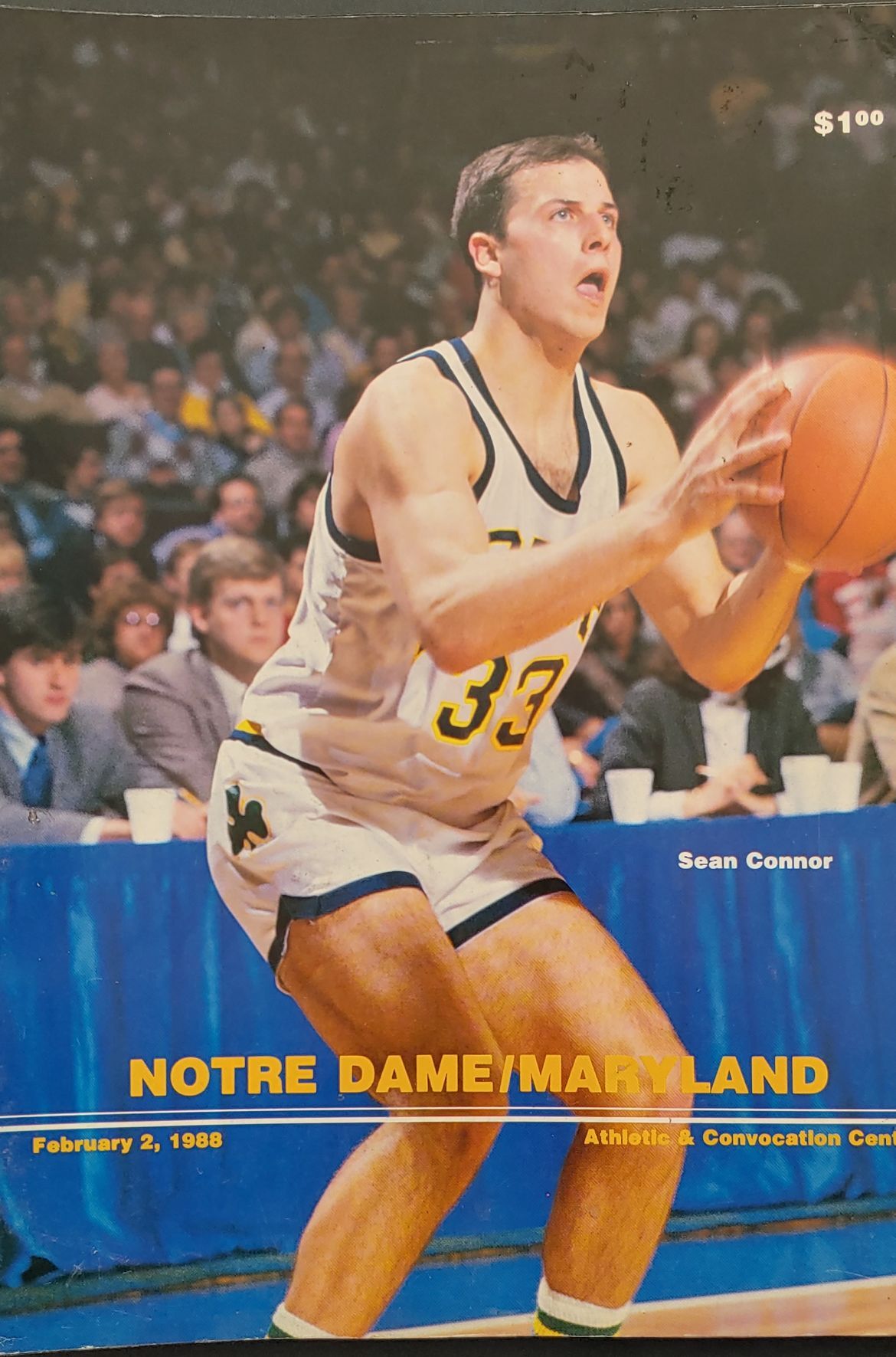 Zeigler-Royalton High School grad Sean Connor is shown here in game action with Notre Dame in the late 1980s. Connor played three years of basketball for the Fighting Irish and also punted on the national championship team his senior year. 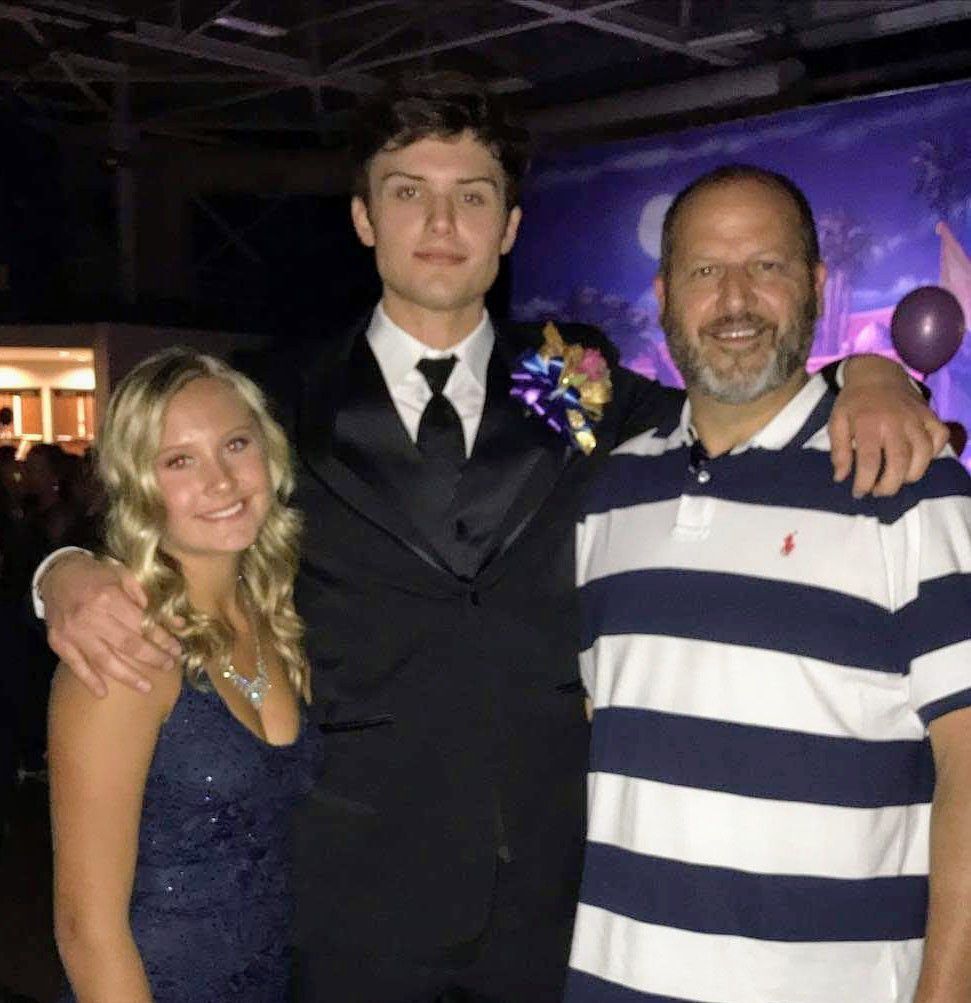 Sean Connor (far right), a 1985 graduate of Zeigler-Royalton High School, scored over 2,300 career points for the Tornadoes, including a school-record 61 for one game. He also led the entire state in scoring his junior year at 33.3 points per game. He is pictured here with his children, Gracie, a junior at Marion High School, and Jackson, a freshman at John A. Logan College.

ZEIGLER — With all due respect to teams and players before and since, Black Diamond Conference basketball was, hands down, at its best in the 1980s. There were three 2,000-point scorers, four if you count one that graduated at the start of the decade in 1980, and several teams that could rival some of the biggest schools in the region.

If not the best all-around player of that decade, certainly the best shooter was Zeigler-Royalton's Sean Connor.

Listed at 6-foot-7, Connor was a four-year varsity starter who earned his reputation as a stone-cold shooting forward primarily from three-point range but before there was a three-point line added.

How good was Connor?

"The most talented team I played on at Z-R was my sophomore year," said Connor, now in his early 50s. "We got a late start because we were playing in the state championship football game the day after Thanksgiving and our junior varsity had to represent us at the Christopher Turkey Tourney. They went 0-3. We then lost our next two games before we finally started putting things together by the time we got to the Carbondale Holiday Tourney."

Connor explained that because of the bad start, the Tornadoes were the bottom seed in a one-class, 16-team tournament at Carbondale.

"We got matched up against the No. 1 seed, Champaign Centennial, but took them down to the wire before they beat us at the end. We then won our next three games to capture the consolation championship and I was named the tourney MVP. That was a major accomplishment for me," Connor said.

Z-R earned the league championship that season, too.

In Connor's year, he broke the school's single-game points record of 46 held by Jim Mitchell at home against Sesser-Valier with 49 points.

"I remember their coach (Ron Van Horn) saying he should have taken one step in (onto the floor) and fouled me, because I was hitting some shots from pretty close to their bench. It was just one of those nights when the rim felt as big as the ocean. And I was in a rhythm."

Later that year, Connor struck for 61 at Thompsonville.

After winning back-to-back regional titles in 1979 and 1980, Z-R fell short of that goal during Connor's four-year reign.

"We were 26-3 my freshman year, but Du Quoin beat us in the regional," Connor said. "Our only other losses came against two very strong teams in Cairo and McLeansboro that year."

Despite his size, Connor said he only recorded two dunks at the prep level.

Had there been a 3-point line, however, Connor would have scored well over 2,500 points, instead finishing with 2,390 total points in four years of varsity ball, ranking him 45th best in Illinois history.

"I think sometimes there's too much of a focus on 3-point shooting today," Connor said. "Mid-range jumpers have kind of gone away. Everybody wants to shoot the three."

Connor said that while his father, George, an outstanding player for Zeigler back in the early 1960s, introduced him to the game of basketball, he received sound instruction on the fundamentals from junior high coach Mickey Stafko and high school coaches John Kretz and John DeNosky.

'It was obvious when Sean was a freshman that he was one of the premier shooters in the area, if not the state, even then," said Kretz, himself quite the shooter and scorer a decade earlier at nearby Christopher. "Sean had the ability to post up and score or go outside and score. And despite how many expectations there were of him coming into high school, he was extremely coachable. His ears were open and he could accept criticism. That made him a dream to coach."

Kretz said opponents would try a variety of gimmick defenses against Connor and Z-R ... triangle-and-two, box-and-one, and diamond-and-one, but very few slowed Connor's ability to score an abundance of points.

Kretz added that he was not surprised Connor enjoyed success at Notre Dame.

"He was a good scorer for them and played at a high level against some of the best teams in the country. He was the guy they counted on to shoot the basketball when teams zoned them. Sean was without a doubt one of the best players to ever come out of Southern Illinois."

"They were all good schools, but since I was a little kid, I always wanted to play for Notre Dame," said Connor, who has Irish blood flowing through his veins.

As a freshman, Connor became one of the first players off the bench for head coach Digger Phelps. When other teams employed a zone defense, the former Tornado was called upon to fire away from long range in an effort to loosen up the defense and open up the inside game for the team.

"The three-point line came along my sophomore year at Notre Dame," Connor said. "I got some starts and my highlight came when I had 13 points against North Carolina, which was ranked No. 1 in the country. I followed up with 16 against LaSalle and my confidence level as a player was peaking," he said.

Connor switched teams his senior year. But instead of transferring to another school to play basketball, he switched sports. Connor was one of Lou Holtz's punters on a team that went on to win the national championship.

"Lou had recruited me as a quarterback and punter when I was in high school and he was coaching at the University of Minnesota. When he got hired at Notre Dame, he asked me for two years if I would consider playing football. I kept saying no. But when I said I would help out with special teams my junior year, Coach Phelps pulled my basketball scholarship before my senior year. So, I walked down the hall to Lou's office and told him what had happened and said I couldn't afford to pay to go to school there. Lou told me he had two scholarships left and that I could have one of them."

Connor said he didn't get to punt very much, but he did frequently run the scout team quarterback in practice.

"It was such a great experience. Running out there onto the field for home games was special. We had wins that year over Miami, Michigan and USC, and then beat West Virginia in the Fiesta Bowl for the national championship in January of 1989."

Connor earned a degree in business administration with a minor in marketing. He worked for more than 20 years in medical sales. Today, he is service manager for Larry Stovesand Kia Motors in Carbondale.

Son of George and the late Mary Jo Connor, Sean is divorced with two children, Jackson, a freshman basketball player at John A. Logan College, and Gracie, a junior athlete at Marion High School. Sean also has a younger brother, Clint, a physician at the VA Medical Center in Marion, and younger sister, Sally, who works in the pharmacy at the VA Medical Center.

Zeigler-Royalton High School grad Sean Connor is shown here in game action with Notre Dame in the late 1980s. Connor played three years of basketball for the Fighting Irish and also punted on the national championship team his senior year.

Sean Connor (far right), a 1985 graduate of Zeigler-Royalton High School, scored over 2,300 career points for the Tornadoes, including a school-record 61 for one game. He also led the entire state in scoring his junior year at 33.3 points per game. He is pictured here with his children, Gracie, a junior at Marion High School, and Jackson, a freshman at John A. Logan College.