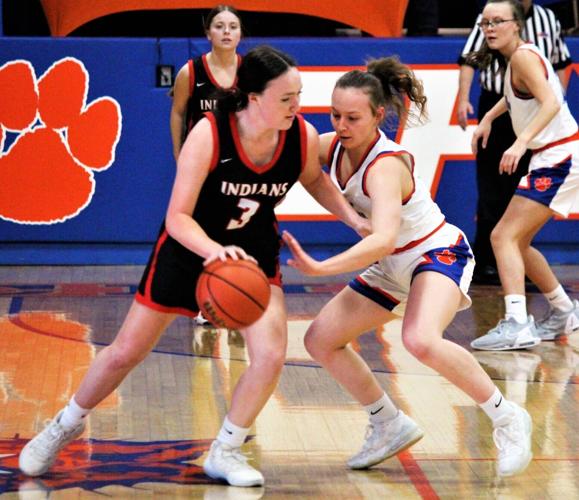 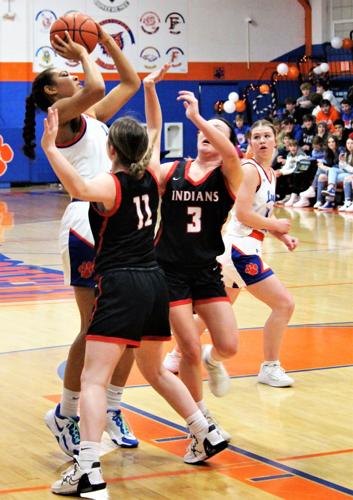 Christopher junior Amiah Hargrove puts up a shot against Hope Newell (11) and Zoee Cullum (3) of Johnston City at Christopher High School on Monday. 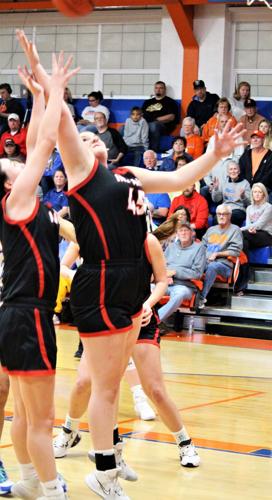 Johnston City's Carsyn Clark and Zoee Cullum battle for a rebound against Christopher on Monday night at Christopher High School.

CHRISTOPHER — It was an electric atmosphere at Christopher High School on Monday evening. The home side was full as Bearcats fans celebrated their sensational 20-1 team and honored six players before the game as part of Senior Night festivities. Fans also got to celebrate yet another win as the 'Cats strolled to a 48-17 Black Diamond Conference West victory over Johnston City.

Christopher improves to 6-0 in the league and 21-1 overall, which includes eight straight wins, while the Indians slide to 3-5 in the conference and 10-11 overall.

The Bearcats jumped out to an 8-5 lead at the end of one period of play. Junior All-Stater Amiah Hargrove got the home team off on the right foot with a jumper along the left elbow for a 2-0 lead.

Emma Moake countered with a 3-pointer to give the Tribe a brief 3-2 advantage. Emily VanHoorebeke answered for the 'Cats with a jumper to make it 4-3.

Zoee Cullum scored in Johnston City's next possession for the visitors' final lead at 5-4. Christopher responded with back-to-back buckets from Hargrove - one on a jumper and one on a layup down low in the paint.

Van Hoorebeke drained another jumper for a 10-5 lead. Hargrove scored again. Tori Crain got a steal and raced in for a two-pointer. Hargrove scored off an alley-oop pass and then once more on a lay-in basket for a commanding 18-5 advantage.

Baskets by Carsyn Clark and Hope Newell closed the gap somewhat, but the 'Cats went into the half up 12 at 23-11.

Christopher exploded offensively in the third quarter, tallying 22 points for a commanding 45-15 lead, resulting in a running clock for the fourth quarter.

Not to be overlooked was a suffocating man-to-man defense that would switch to traps in the half court. Christopher held Johnston City's offense to only 11 first-half points and only six more points in the second half.

"I thought the girls worked really hard tonight on the defensive end," he said. "Anytime you can hold a team to 17 points for the game, you are doing something right on defense. We also get a lot of points off our defense."

Hargrove paced the Christopher offense with 19 points. VanHoorebeke followed with 11 points. Crain checked in with seven. Jackson and Gordon had five each.

"We're trying to build some confidence around Amiah," Carter said. "And I thought we accomplished that tonight. Emily (VanHoorebeke) shot the ball very well. It's good to see her enjoy success after all her hard work."

The Indians were led by Clark's six points. Moake followed with five. Johnston City will host Sesser-Valier/Waltonville on Thursday. Christopher will travel to Wayne City on Thursday.

“We knew this was going to happen at some point, but we didn’t want to lose sight of the team as a whole and the way we’ve been playing. The record just came naturally,” said Marion coach Melissa Courter.

The win was especially sweet for the Wildcats as it was part of Marion's Senior Night festivities.

CARBONDALE — Centralia got off to a fast start and held off a fourth quarter rally by Carbondale to beat the Terriers, 49-35, in a South Seven…

Mount Vernon ran away with the 2022 Benton Christmas Classic Championship after posting a 67-41 win over the host Rangerettes Thursday night.

Catch up with the day's events and final scores of the Benton Christmas Classic.

Christopher junior Amiah Hargrove puts up a shot against Hope Newell (11) and Zoee Cullum (3) of Johnston City at Christopher High School on Monday.

Johnston City's Carsyn Clark and Zoee Cullum battle for a rebound against Christopher on Monday night at Christopher High School.