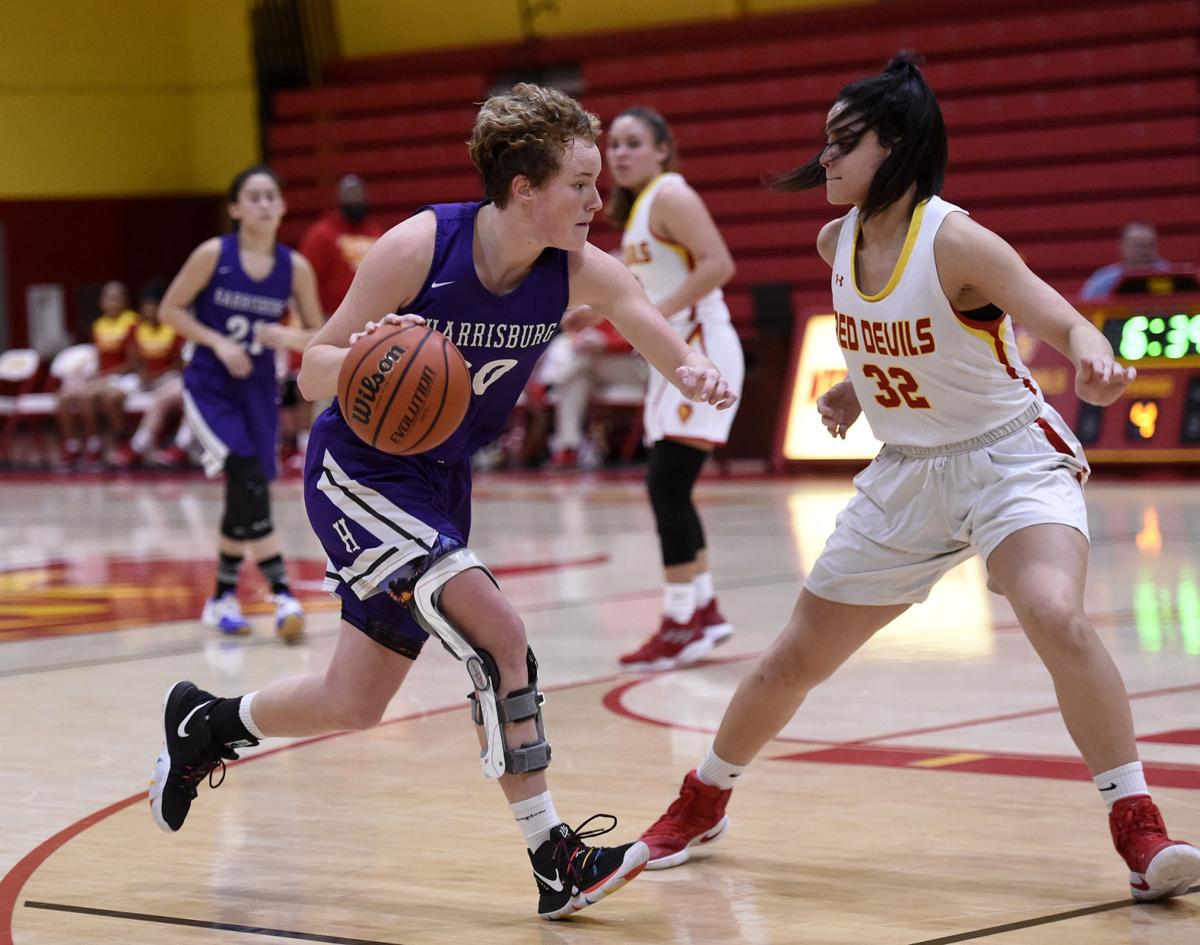 Harrisburg’s Lauren McDaniel (20) drives on Murphysboro’s Kylee Kerrens (32) during the fourth quarter on Feb. 3 in Murphysboro. 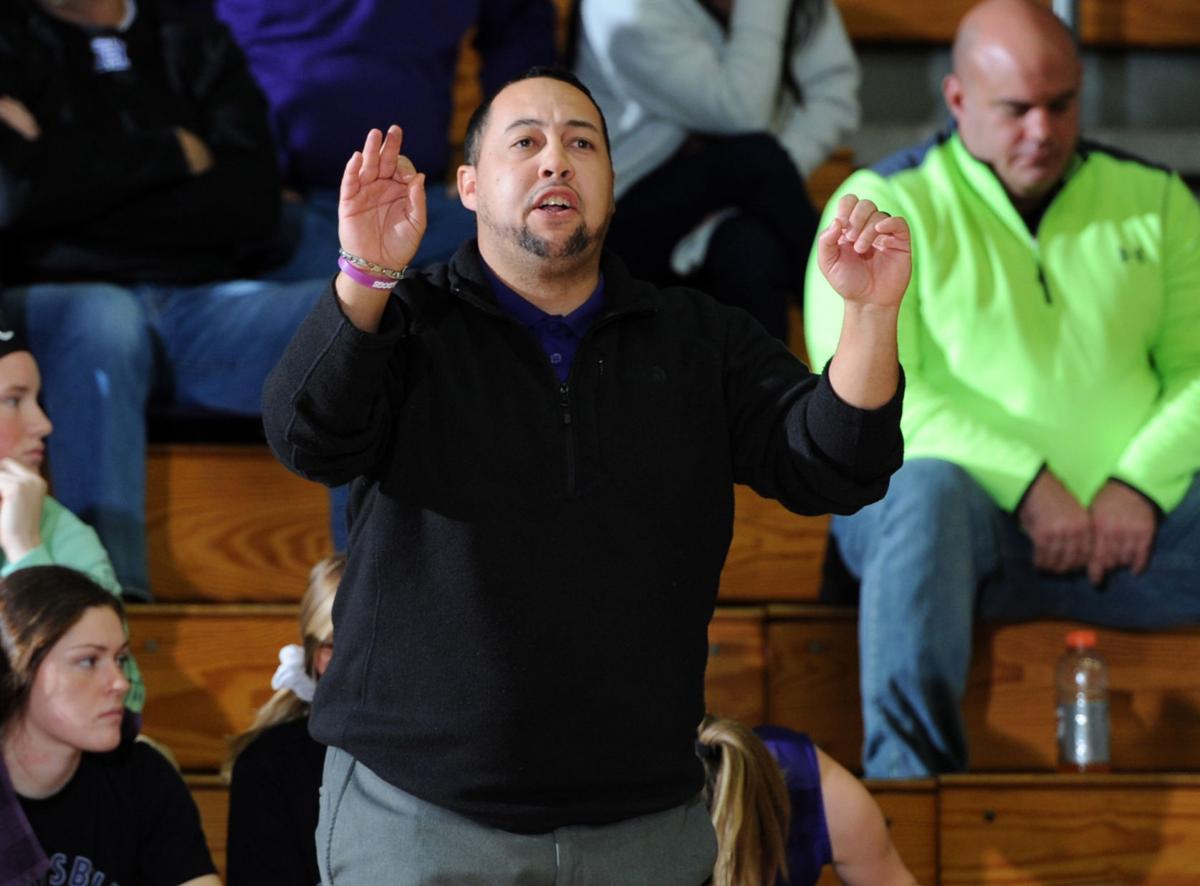 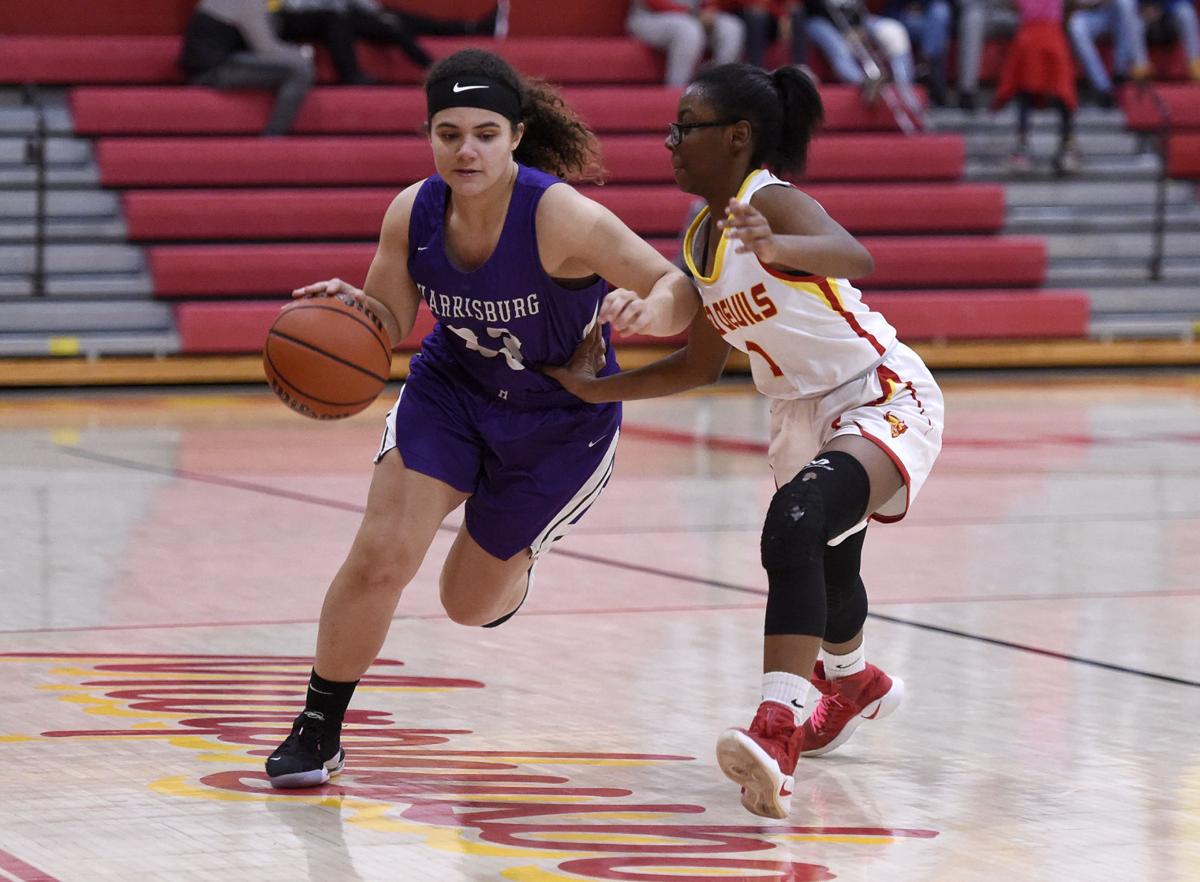 Harrisburg’s Essence Sanders (23) dribbles past Murphysboro’s Island Dooley (1) during the fourth quarter on Feb. 3 in Murphysboro. 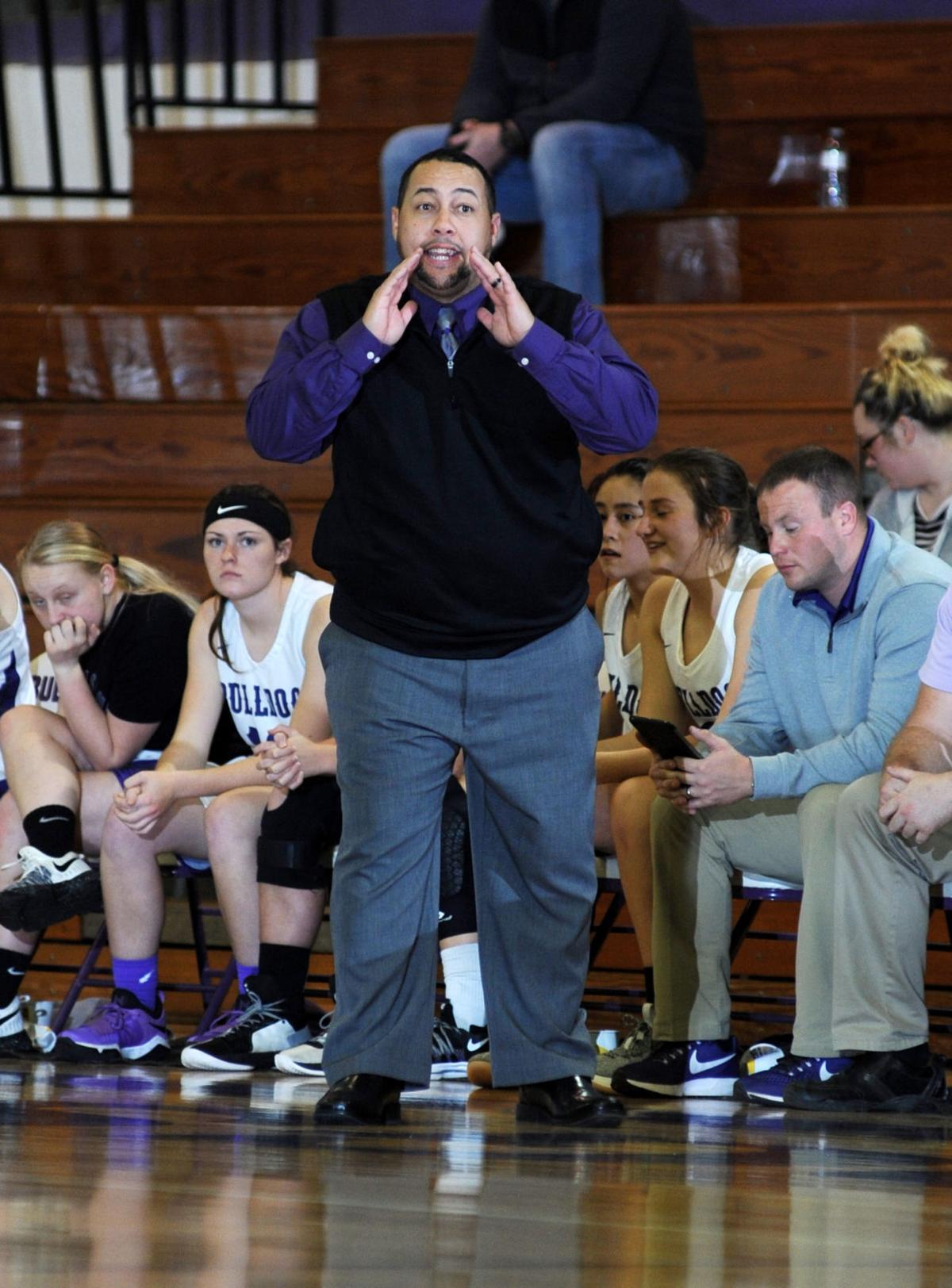 Harrisburg head coach Jake Stewart calls out a play at Davenport Gymnasium in 2018. 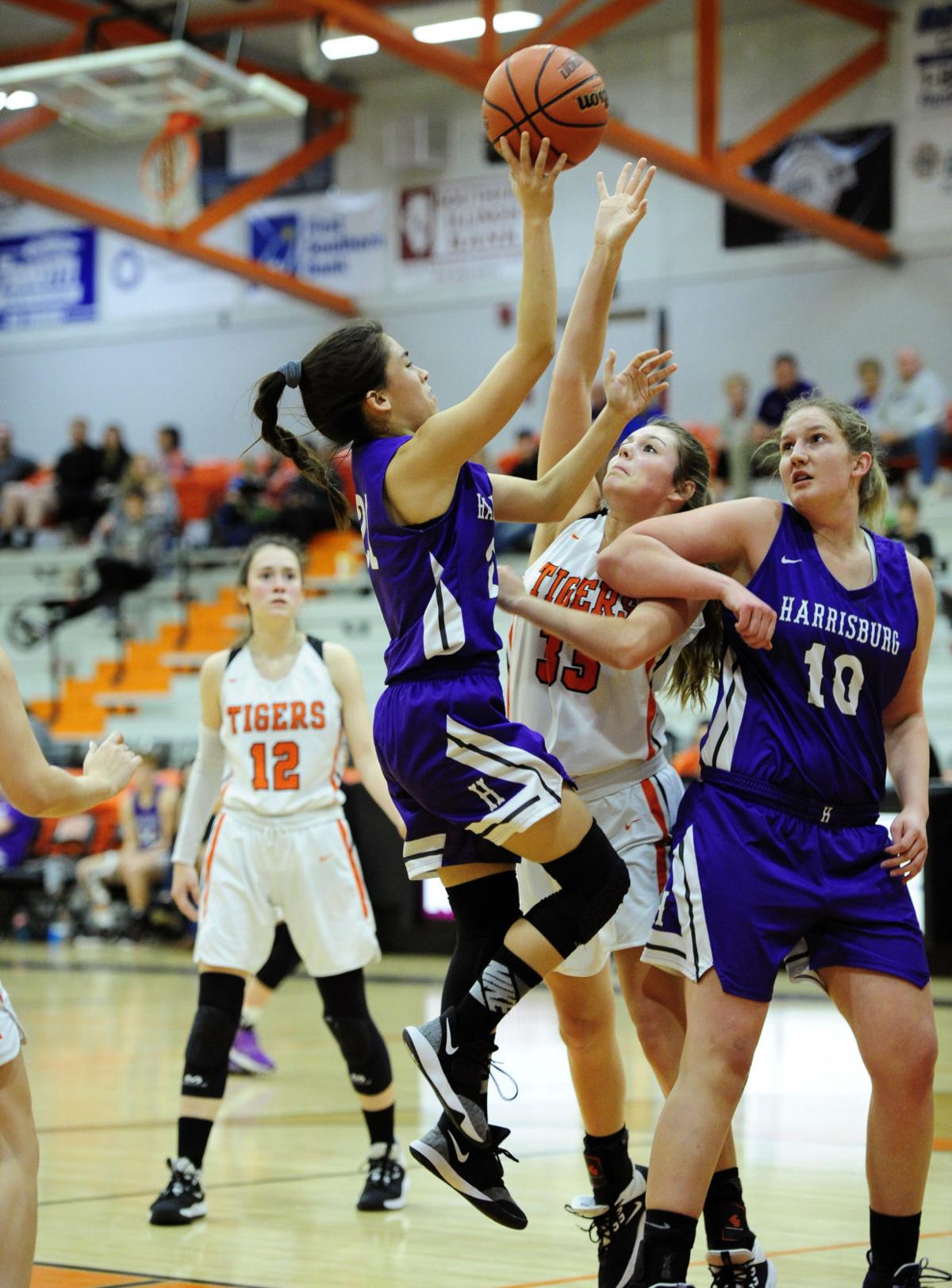 Harrisburg's Summer Sanders puts up a shot against Herrin's Presli Karnes during the Harrisburg Bulldogs SIRR-Ohio contest against the Herrin Tigers at Memorial Gymnasium on Jan. 9 in Herrin.

Harrisburg is in a transition phase under head coach Jake Stewart since graduating all five of his senior starters from a year ago.

Stewart’s offseason plans of rebuilding a championship caliber team have since been put on hold due to COVID-19, but if there’s one man for the job it’s Stewart, according to senior Lauryn Gribble.

“He’s a great coach that always finds ways to keep us prepared,” said Gribble. “This whole pandemic has been really frustrating because we haven’t been able to play much together outside of J-V last year.

“We really want to play because this team knows we can step up to the occasion.”

The pandemic has cut out roughly 35 to 40 summer games for Stewart and his players, which is important experience time for a team looking to solidify a new starting rotation and win its fifth-consecutive Class 2A regional championship. Harrisburg finished 29-5 in 2019 with a 9-1 conference record behind a stable foundation of Summer and Essence Sanders, Lydia Miller, Lauren McDaniel, Gabby Adams, Mya King and Lexi Williams.

A senior class that accounted for 112 of Stewart’s 200 career wins since taking over in 2011 made Harrisburg a real threat to opposing teams. The leadership roles now fall on the shoulders of Gribble and fell senior Molly Shire; a task that Stewart believes they are both ready for.

“Lauryn backed up Lydia last season and has already shown her leadership,” said Stewart. “All of those seniors from last year took all of our scoring and experience with them, but we’re going to find players who can step in and contribute.”

Juniors Stream Black, Chelsea Davidson, KK Moss and Riley Harrison are all expected to play major roles for Harrisburg alongside the two seniors. Black played big minutes as a sophomore for the Lady Bulldogs and did exactly what her coach asked of her to earn a varsity spot.

“Coach Stewart came up to me and said he’s going to need me to start shooting threes,” said Black. “I played center as a freshman, but we didn’t need a center on varsity. I think he saw that I was a hard worker and the experience ended up being very fun.”

Stewart transitioned Black to a forward position in her sophomore year and saw her blossom as a shooter. Black led Harrisburg in three-point shooting a season ago and remains a key player on the team thanks to her hard work and varsity experience.

Black was shocked to have such success from deep as a sophomore still learning the ropes of varsity.

“I’m the only person in my family that plays basketball and didn’t expect my threes to actually go in,” said Black. “Last year taught me so much about basketball. This year I see myself playing everywhere on the court.”

The offseason regimen for Black includes working on her ball-handling skills — a skill that she feels needs the most practice.

“Lauryn and Stream carry the most varsity experience coming in and I expect them to step up,” said Stewart. “I think our bench might be a little shorter than it was in recent years, so we’re going to have to rely heavily on our top five to six players early on in the season.”

“We only have a couple of seniors and four sophomores, but have big junior and freshman classes. I don’t know if the freshman will be ready in time for the season; in the first days of open gym, the freshman came in and played well for us.”

Part of Harrisburg’s modus operandi last season was making quick passes to take advantage of the height differential Miller presented in the paint. Even when the Lady Bulldogs couldn’t score a basket, they would get the ball inside and draw fouls to get to the free throw line.

The paint now belongs to the 5-foot-11 Gribble, who views herself more as a defensive player. Her offseason has featured many drills set to improve her moves around the basket on offense.

“I know that I need to be better on offense this year,” said Gribble. “I’m working hard in practice to learn how to better execute plays. Working with Coach Stewart since junior high softball has really helped me grow.”

Not having summer games has affected both coaching analysis and players learning their new roles on the offense. The plan for the Lady Bulldogs moving forward is to take it one day at a time.

“I’ve already had conversations with my girls that, if it’s necessary, we’ll hold two-a-day practices in the evening,” said Stewart. “It might not be the most ideal process in the world, but we’ll have to work with any time we’re allowed before the season starts.”

Harrisburg’s Lauren McDaniel (20) drives on Murphysboro’s Kylee Kerrens (32) during the fourth quarter on Feb. 3 in Murphysboro.

Harrisburg’s Essence Sanders (23) dribbles past Murphysboro’s Island Dooley (1) during the fourth quarter on Feb. 3 in Murphysboro.

Harrisburg head coach Jake Stewart calls out a play at Davenport Gymnasium in 2018.

Harrisburg's Summer Sanders puts up a shot against Herrin's Presli Karnes during the Harrisburg Bulldogs SIRR-Ohio contest against the Herrin Tigers at Memorial Gymnasium on Jan. 9 in Herrin.