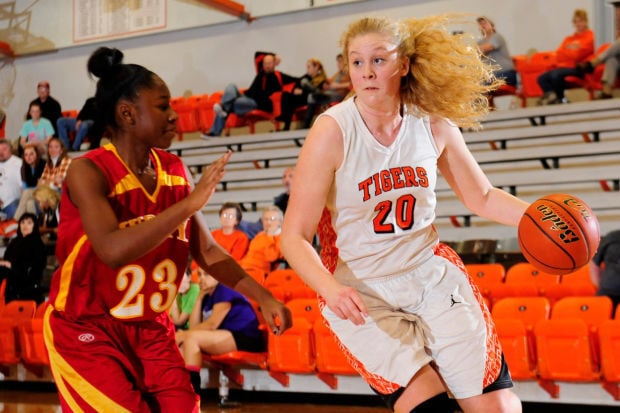 Herrin's Abby Horn drives to the basket during the Lady Tigers' 51-45 win over Murphysboro at Herrin High School on Jan. 28, 2013. 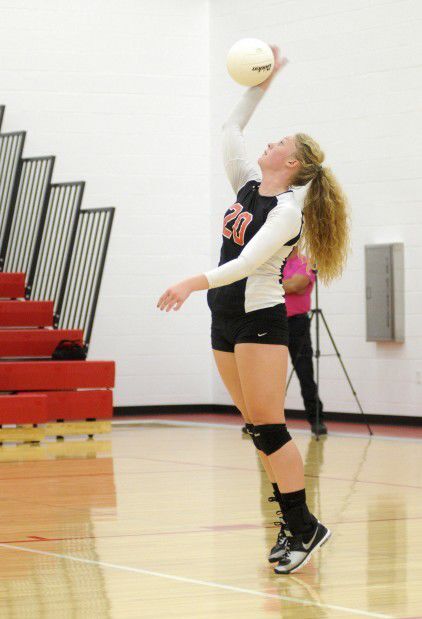 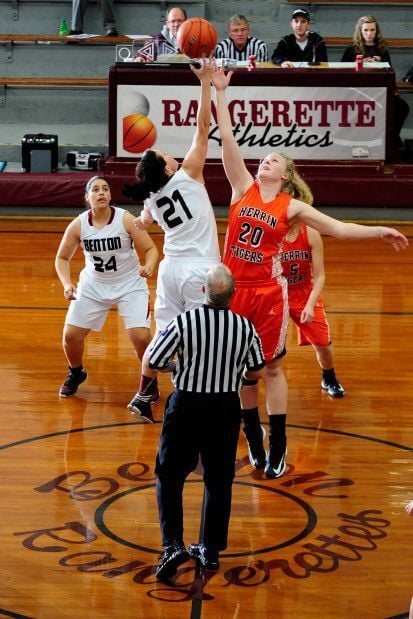 Benton's Morgan Corn and Herrin's Abby Horn contest the tip-off to begin the Rangerettes' 35-31 win over the Lady Tigers at Benton High School on Jan. 8, 2013.

Two things that stuck out about Abby Horn when she was starring in three sports last decade at Herrin: She almost always wore a smile on her face, and she was almost always better than anyone else.

“I never took things too seriously,” she said Saturday while taking a break from moving. “I liked to have fun and I enjoyed playing with my teammates.”

The 2013 Southern Illinoisan Girls Basketball Player of the Year is taking the lessons she learned from her sports career and applying them to her new life. The 25-year old Horn is about to start classes towards becoming an certified occupational therapy assistant while still working part-time in a remote position, taking care of developmentally challenged adults at a Chicagoland facility.

It's that type of multi-tasking that marked her prep sports career. The 6-1 Horn could play multiple positions in basketball or volleyball, and play all of them well. And while it was basketball where she made her greatest impact at Herrin, it was volleyball that helped her get a college degree.

A three-year starter for the Tigers, Horn finished her career with more than 1,000 points and 1,000 rebounds, as well as a school-record 220 blocked shots. As a senior, she averaged 14 points and 9.4 rebounds while working against multiple defenders most of the time.

Horn credits coach Bill Green, who she admits she didn’t see eye-to-eye with during her sophomore year, with motivating her to succeed.

“He always knew how to push the right buttons that lit a fire under me,” she said, laughing. “He made me feel that I could do anything. He could make you mad, but he also cared about you as a person. He always asked how you were doing off the court.”

But it was another sport that allowed her to set a successful path for later in life. An outstanding front row player for coach Irv Lukens in volleyball, Horn earned a scholarship to IUPUI in Indianapolis.

Coming in as a middle hitter/blocker, Horn spent four mostly injury-plagued years with the Jaguars. Other than her sophomore season, when she started 25 of 27 matches and finished second on the team with 89 blocks, she played in just 10 matches.

“Two ankle surgeries and a torn meniscus,” she said. “I spent a lot of time in rehab. It wasn’t a storybook ending by any means, but I learned a lot from that experience. I was able to become a mentor of sorts to younger players.

“I still remember going to IUPUI and not knowing anyone my freshman year. I had to learn new roles, become a supporter and not let my situation affect me or my teammates.”

After foregoing her senior season and graduating with a degree in kinesiology, Horn started the next phase of her life with about as big a culture shock as someone from Herrin can experience.

Opting to do a year of service with Americorps, Horn was placed in Newark, N.J. As she put it, it’s a 20-minute train ride from Manhattan. She tutored fifth and sixth graders in English and Math at Great Oaks Legacy Middle School, and also served as a teacher’s assistant in fifth and sixth grade science.

“A great experience,” she said. “I still keep in touch with those kids.”

Horn has packed a lot into the first portion of her life. Plenty of possibilities await in the next 25 years, or longer. No matter what happens, she’ll lean on the training she received in her prep and college career.

Just because she’s not posting up defenders or roofing hitters doesn’t mean her athletic career is forever shelved.

“The discipline I learned, especially when I was at IUPUI, lasts for a lifetime,” she said. “People don’t realize how everything is scheduled for you, and what goes on behind the scenes. It’s really a lot of work, but it’s helping me now every day.”

Herrin's Abby Horn drives to the basket during the Lady Tigers' 51-45 win over Murphysboro at Herrin High School on Jan. 28, 2013.

Benton's Morgan Corn and Herrin's Abby Horn contest the tip-off to begin the Rangerettes' 35-31 win over the Lady Tigers at Benton High School on Jan. 8, 2013.