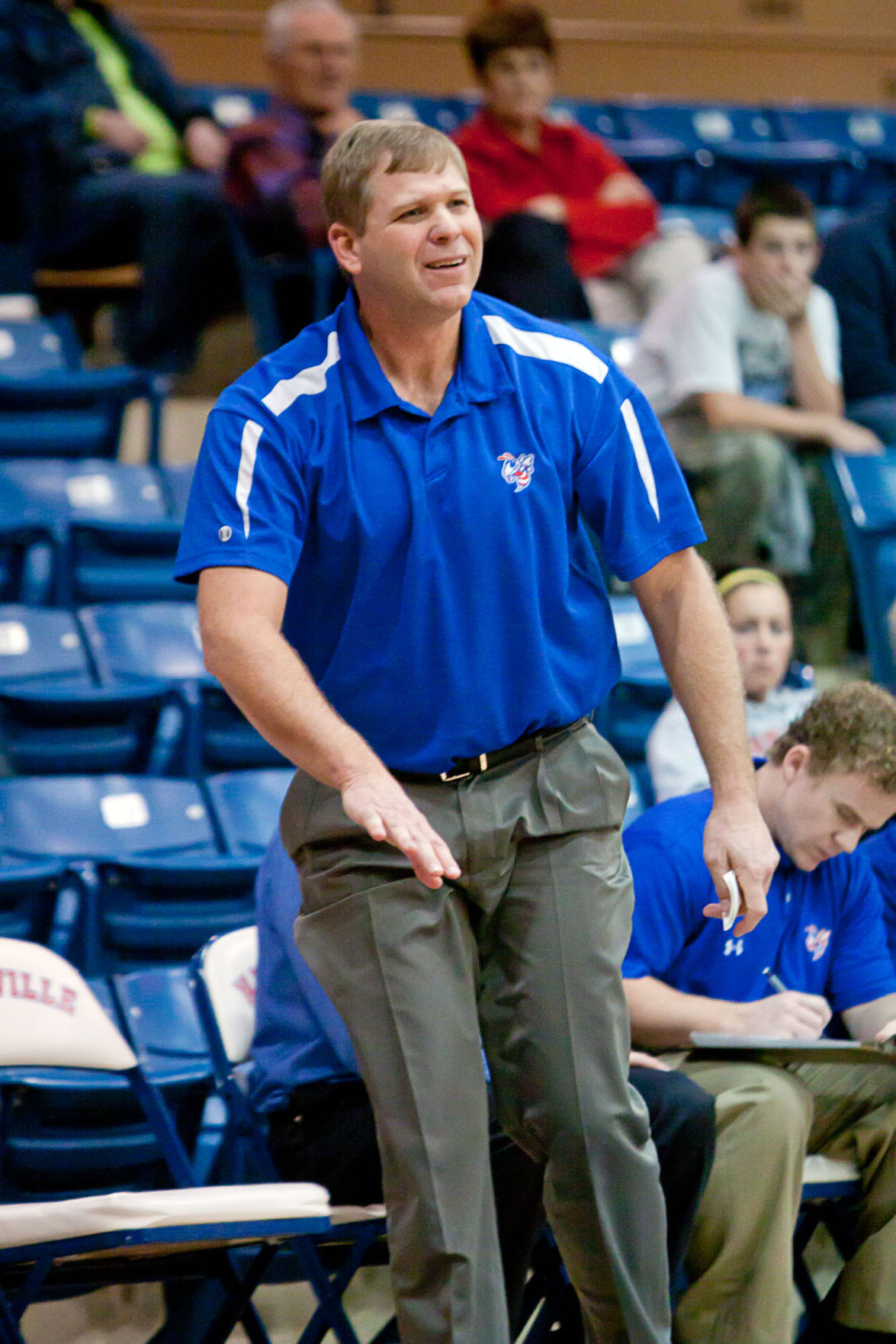 Wayne Harre coaches from the sidelines of a Nashville boys basketball game. 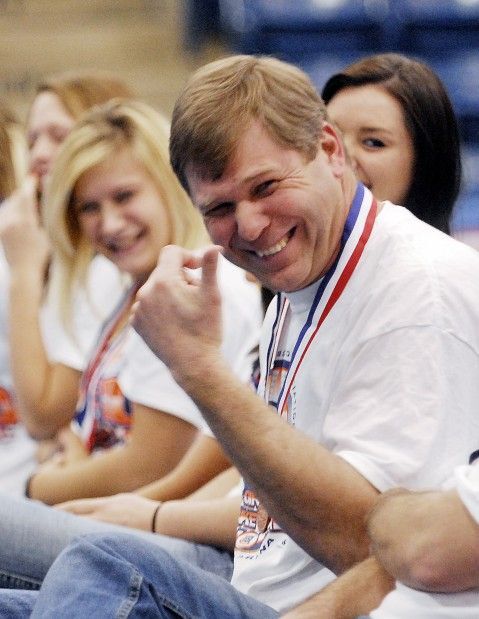 Nashville girls basketball coach Wayne Harre (right) laughs during a welcome gathering at Nashville Community High School in 2010. The team returned home after placing third in the Class 2A state finals in Normal, where they defeated Bishop McNamara 44-35.

Wayne Harre has won a state championship as a head coach, been part of others as an assistant coach in softball and nearly won a second state title just two years into his new gig as Nashville’s boys basketball coach in 2019.

But the most remarkable stat of a remarkable coaching career might be this: Every Harre-coached team — 15 girls basketball squads, three boys hoops teams — has won a regional title. Eighteen teams, 18 regional titles.

It’s hard to get more consistent than that, and that’s why the folksy farmboy is on the short list of great coaches in Southern Illinois prep history. Even though he’ll tell you it’s all about the talent he’s molded.

“The players are the ones doing all the work,” he said. “I’ll be the first to tell you that I’ve had some good players over the years. All the credit goes to them. I really appreciate what they’ve done.”

On the other hand, players come and go in high school. Shaye Harre didn’t play 10 years for the Hornettes, although some people in SIRR Mississippi probably would swear otherwise. Coaches rarely keep the same players from one year to the next.

But keep the same coach around for a while, add talent and smarts to the equation, mix in an occasional dollop of luck and you get what Harre has built in two programs over the last 20 years. His winning percentage is .840, a mark few coaches anywhere can match, let alone surpass.

“His philosophy is that no one is going to outwork his teams,” said Bethany McQuiston, a former assistant under Harre who’s now running the girls basketball and golf programs at Freeburg. “Before big games, he always tells them this is a great opportunity.

“He gets players to buy into what he’s doing. His method works and he’s a proven winner. He relates well to players, and they would run through the wall for him.”

A 1983 graduate of Nashville, Harre played basketball and baseball for the Hornets. After two years at Kaskaskia Community College in Centralia, Harre planned to play at SIU Edwardsville until two things happened.

One, SIU Edwardsville didn’t have the agriculture program that Harre desired. Two, Harre got a phone call from the new coach at SIU Carbondale, a fellow named Rich Herrin.

“He asked if I wanted to walk on,” Harre said. “I just wanted to make the team and travel. And I played more than I could have hoped for.”

Not only that, Harre learned a lot of basketball. He still uses many of Herrin’s methods offensively, saying that Herrin was a master of putting players in the best position to consistently score points.

In that sense, it’s ironic that Harre’s reputation on the sidelines is as a defensive savant. His teams don’t do a lot of fancy stuff, but they are fundamentally perfect. They stay between their man and the goal, and their persistence leads teams to often settle for one well-contested shot that’s followed by a defensive rebound.

Between their steady excellence on defense and willingness to work for a carefully-chosen shot on offense, Harre’s teams are impossible to speed up. His 2012-13 girls team that won the Class 2A title featured four Division I athletes and lots of smarts.

“We had structure, but also had very smart players,” Harre said. “I trusted them. All five players could score and people couldn’t score on us. It was a complete team.”

Like most smart coaches, Harre has evolved in his interactions with players. He started in an era where “my way or the highway” was encouraged. For most of his 18 years as a head coach, he’s employed a lighter approach for the most part, although he can get as intense as needed.

But whatever method he’s used, Harre has succeeded. He could lose his next 150 games and still have a winning percentage of nearly 67 percent. Life isn’t a 27-5 proposition, but Harre makes it look that way.

“Does it work out all the time? No,” he said. “But our big philosophy is we try to climb the ladder and get to the top. We always try to get to the state tournament. Otherwise, you’re cheating the kids.”

This is the ninth in a 10-part series on the top prep coaches in Southern Illinois history. They were chosen on a basis of won-loss record, state championships and impact off the field. This series will run every Sunday and Wednesday until July 22.

Prep Basketball | Thomas made his mark at Pinckneyville

One sure way to figure out just how immortal someone is in a particular town is if something is named after them.

From personal kindness sprouted one of the best coaching careers in Southern Illinois annals. Now Shanna Green has won three Class 1A titles as Goreville’s softball coach and taken five teams to the state tournament in an eight-year span.

Wayne Harre coaches from the sidelines of a Nashville boys basketball game.

Nashville girls basketball coach Wayne Harre (right) laughs during a welcome gathering at Nashville Community High School in 2010. The team returned home after placing third in the Class 2A state finals in Normal, where they defeated Bishop McNamara 44-35.