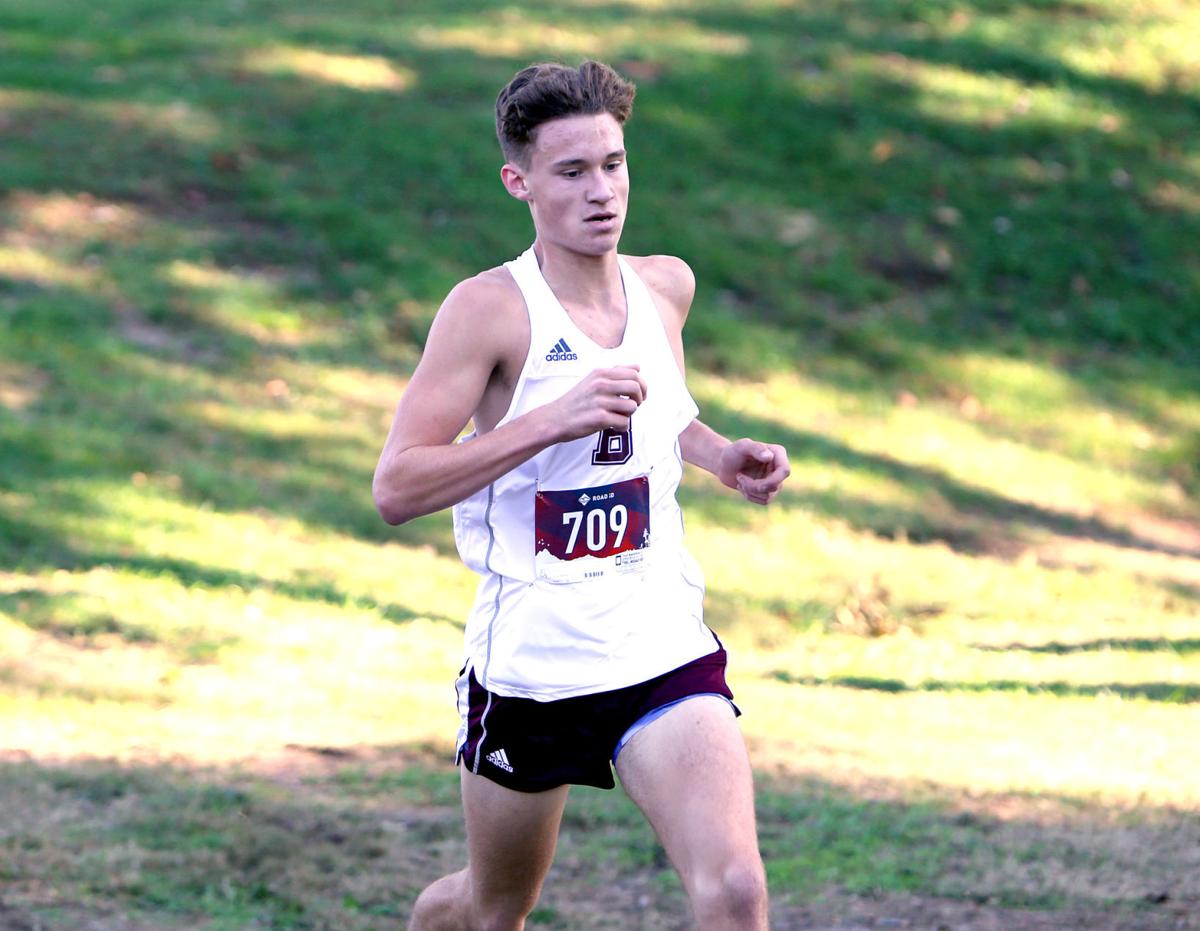 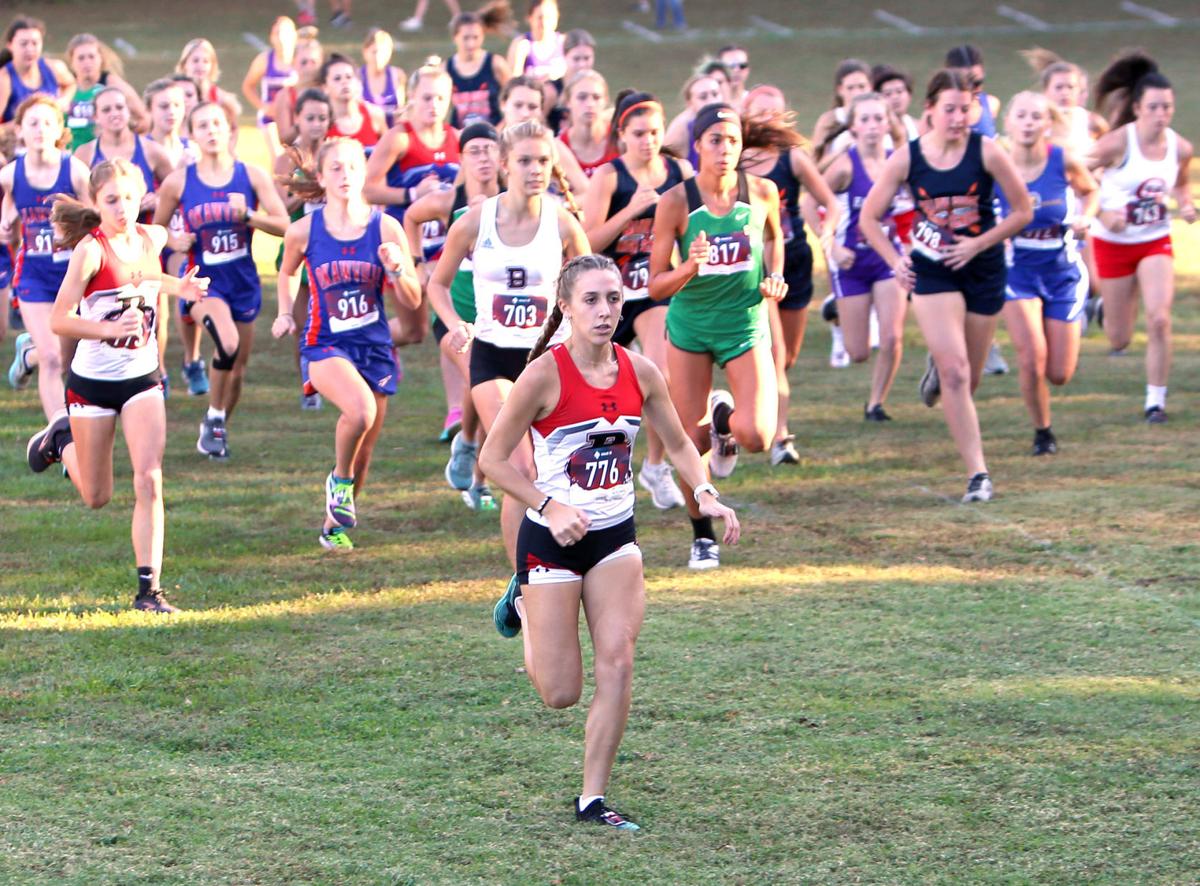 Du Quoin senior Olivia Phillips separates from the pack at the start of the girls race at the Benton Invitational cross country meet held Monday at the Benton City Park. Phillips won the race in 17:34.6. 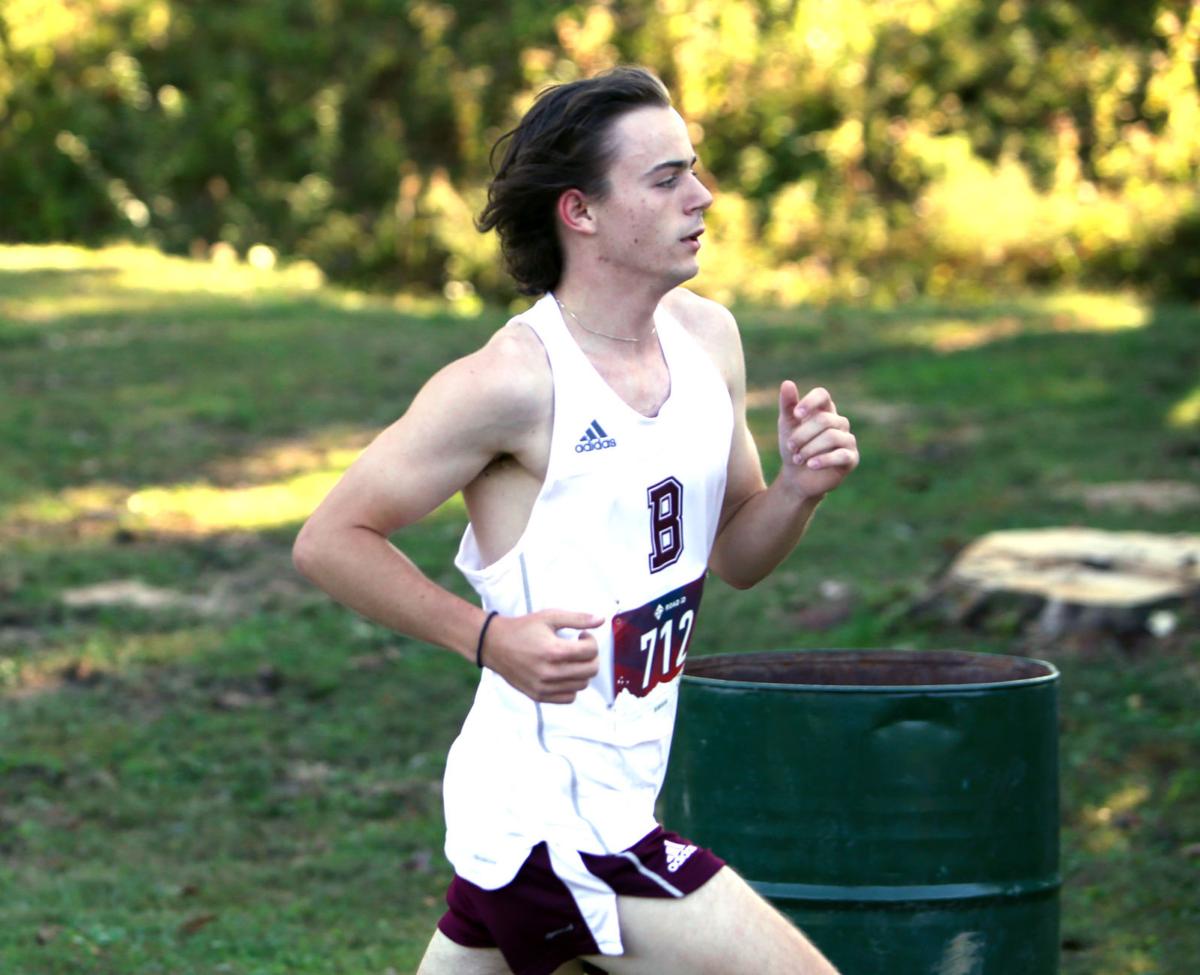 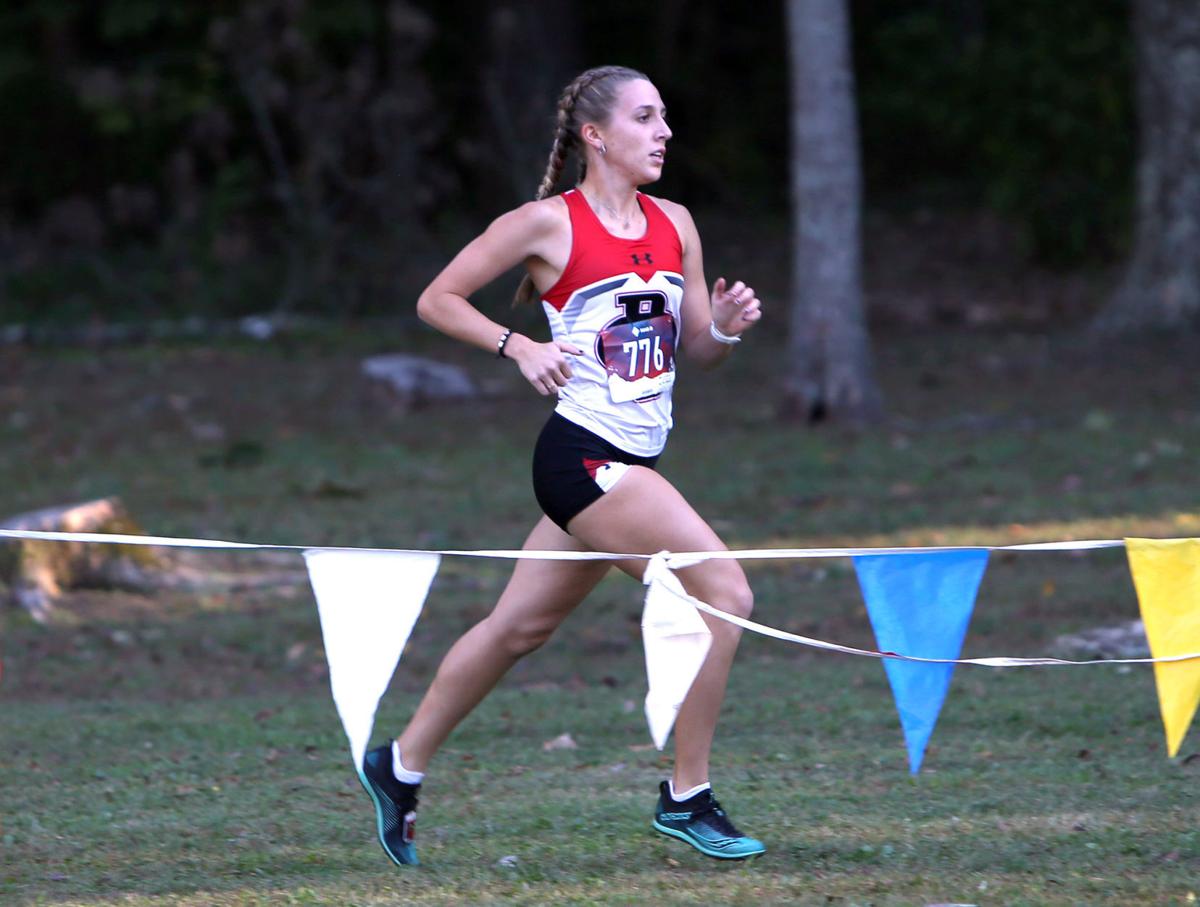 Du Quoin senior Olivia Phillips pulls away during the girls race at the Benton Invitational cross country meet held Oct. 18 at the Benton City Park. Phillips won the race in 17:34.6. 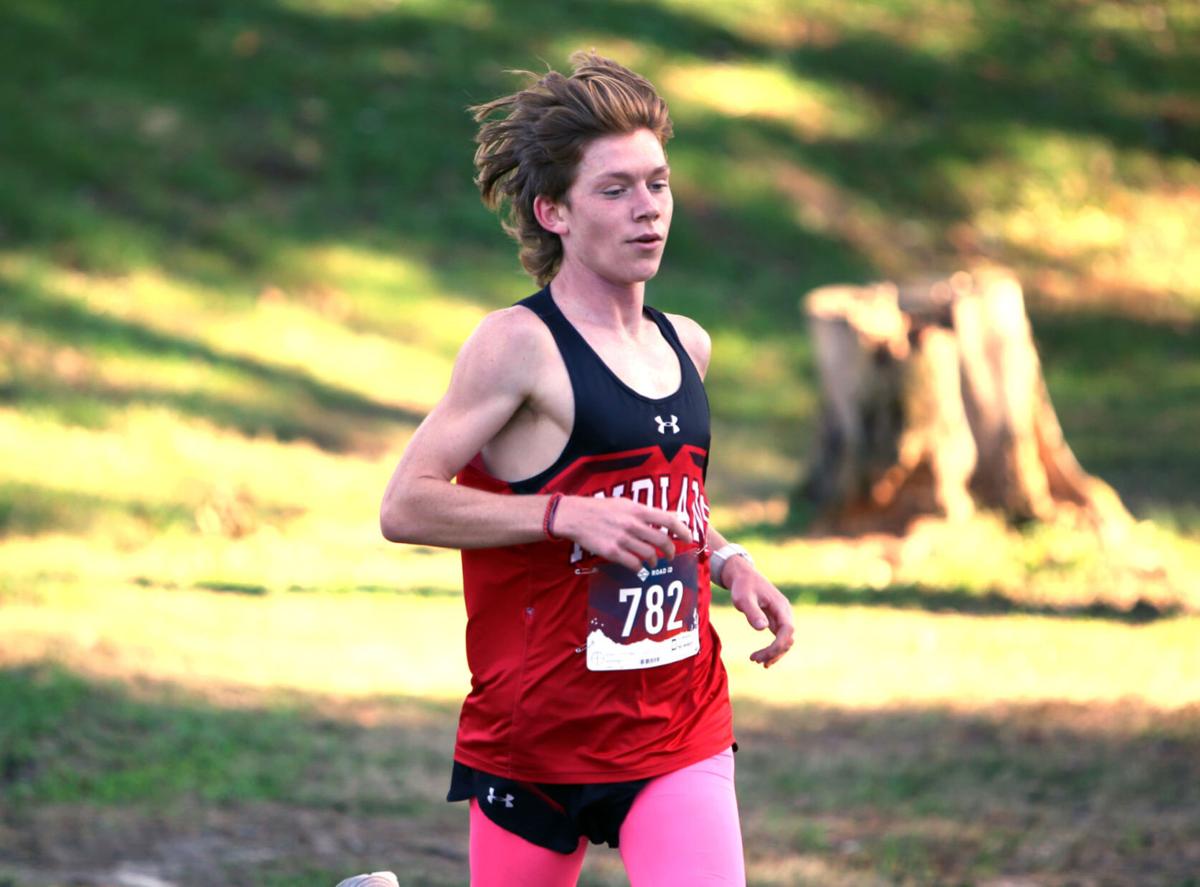 But both runners are coming back Saturday to begin the Class 1A postseason and looking to lower their times.

Genisio, a sophomore who last week set a course record in Herrin at the SIRR Conference meet, was clocked electronically at 14 minutes, 25.1 seconds.

A sheet of paper near the announcer's microphone had the course records scribbled on it. For the boys, the mark written was 14:25.

"I was trying to beat the course record," Genisio said. "I don't know if I got it or not. If I did, it was by milliseconds."

Considering he didn't officially go under the 25-second mark, that leaves a goal for Saturday on a course Genisio knows well.

It's a course where getting out to a fast start is the key, Genisio said.

Benton dominated as a team with five runners in the top seven and their sixth, which didn't count in the team score, placed 16th. Senior Chase Owens was fourth (15:51.1), followed by teammates Mason Tieffel (15:54.8), Gabe McLain (15:55.7) and Cole Buchanan (16:12.7) in the next three spots. McLain and Buchanan are just freshmen.

"We came out here as a team and did really well," Genisio said. "Our goal was to win this meet and perform well and get our times down. I think we did that. I'm really proud of my team."

Du Quoin senior Landen Swiney was second in 15:22.7, while Okawville junior Grant Schleifer was third in 15:43.3.

Marion, which was coming off its recent South Seven Conference championship, placed its top six runners in the open race instead of the varsity.

In the girls race, Phillips took off like a rocket at the start to get ahead of the pack and finished in 17:34.6. The Du Quoin senior had already caught her breath by the time Carterville freshman Molly Robertson crossed in second place at 19:00.7.

"This is a really fast course and I'm pretty sure this is my No. 1 favorite course," Phillips said. "I love running this course because I know it's fast. I know how to push myself and make myself go because you have a short amount of time and you can really drop some time here."

Phillips was asked to elaborate on why she likes the course so much.

"It's out in the woods and I kind of like running those trails," she said. "Although it's kind of a dangerous course because there are rocks in some parts. But I still really enjoy running here. I just love the hills. They make me go fast."

There is still unfinished business, however. That sheet of paper near the microphone showed the course record for the girls is 16:47. Phillips was aware.

"I was trying to go for Mia McLain's record," Phillips said of the former Benton standout now running for the University of North Florida. "So I still have some work to do. I have one more chance on Saturday. I'm really going to push it on Saturday."

Du Quoin cruised to the team title as Lauren Heape was third in 19:03.5 and freshman Maggie Kellerman was seventh (19:41.2). Benton senior Jacey Eubanks was fourth (19:25.9) and Christ Our Rock Lutheran's Sarah McKowen cracked the top five at 19:28.3.

The Lady Indians had just 39 team points, while runner-up Carterville had 110 and CORL took third at 114. Okawville was fourth (126) and the host Rangerettes placed fifth at 130.

The Benton Regional begins Saturday with the girls race at 9 a.m., followed by the boys at 10. The top teams and individuals not on advancing teams move on to the Trenton Wesclin Sectional.

There wasn’t a state tournament in the winter of 2021 because of COVID-19, but the unofficial state champion in Class 1A came from the South E…

Asked what Tolono Unity’s berth in the state championship game would mean to Jordan Reinhart, LeRoy coach B.J. Zeleznik replied, “Oh man, he would have been ecstatic.”

It was a successful first week of the IHSA football playoffs for local schools. Now comes a different challenge, one mostly fought on the road.

JOHNSTON CITY — Carterville started out slow in both sets, but the Lady Lions rallied Monday night to beat Carmi-White County in straight sets…

MARISSA — The best Trico volleyball season in a while screeched to a halt Monday at Meteor Fieldhouse, undone by a handful of things it could …

Du Quoin senior Olivia Phillips separates from the pack at the start of the girls race at the Benton Invitational cross country meet held Monday at the Benton City Park. Phillips won the race in 17:34.6.

Du Quoin senior Olivia Phillips pulls away during the girls race at the Benton Invitational cross country meet held Oct. 18 at the Benton City Park. Phillips won the race in 17:34.6.