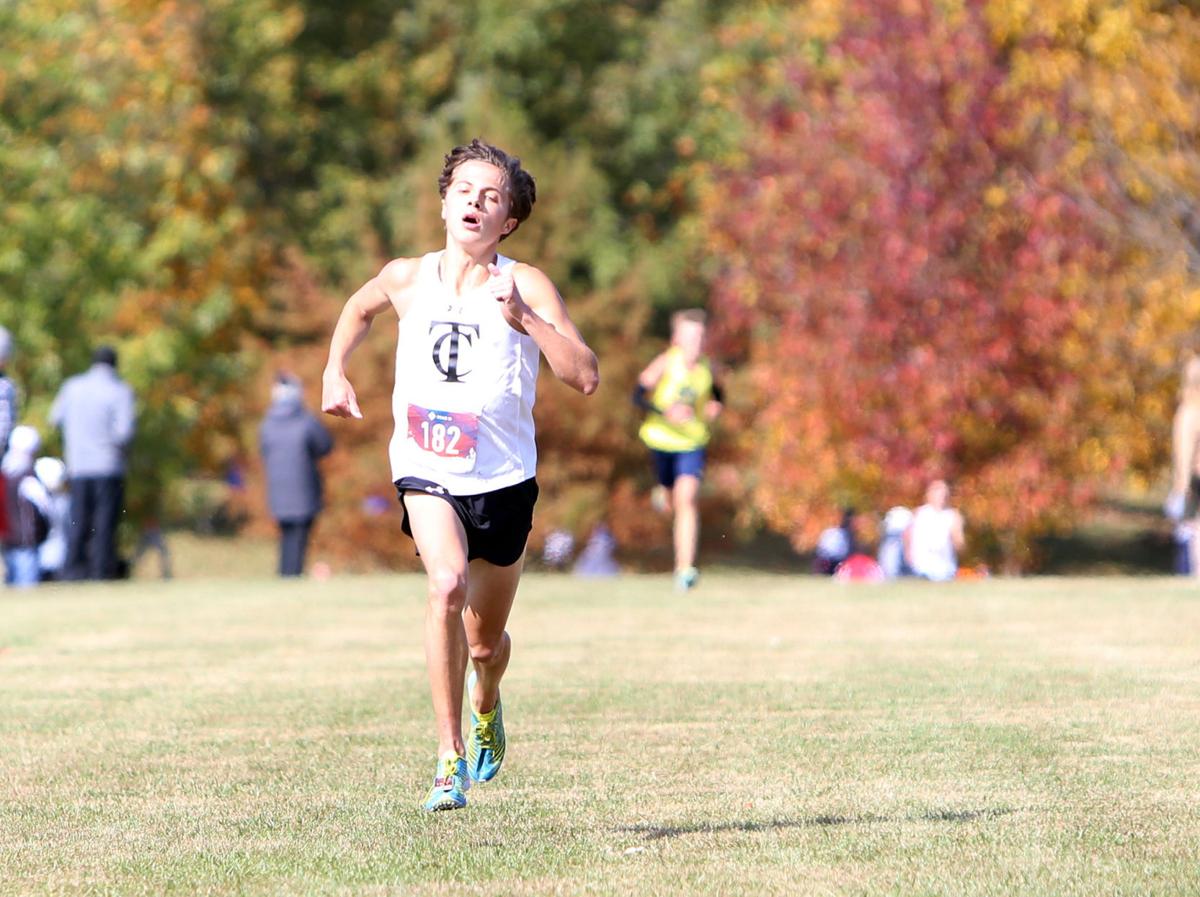 Carbondale's Alex Partlow approaches the finish line ahead of Marion's Dylon Nalley during the first flight boys race during the 2020 Highland Class 2A Regional at Fireman's Park in Alhambra. 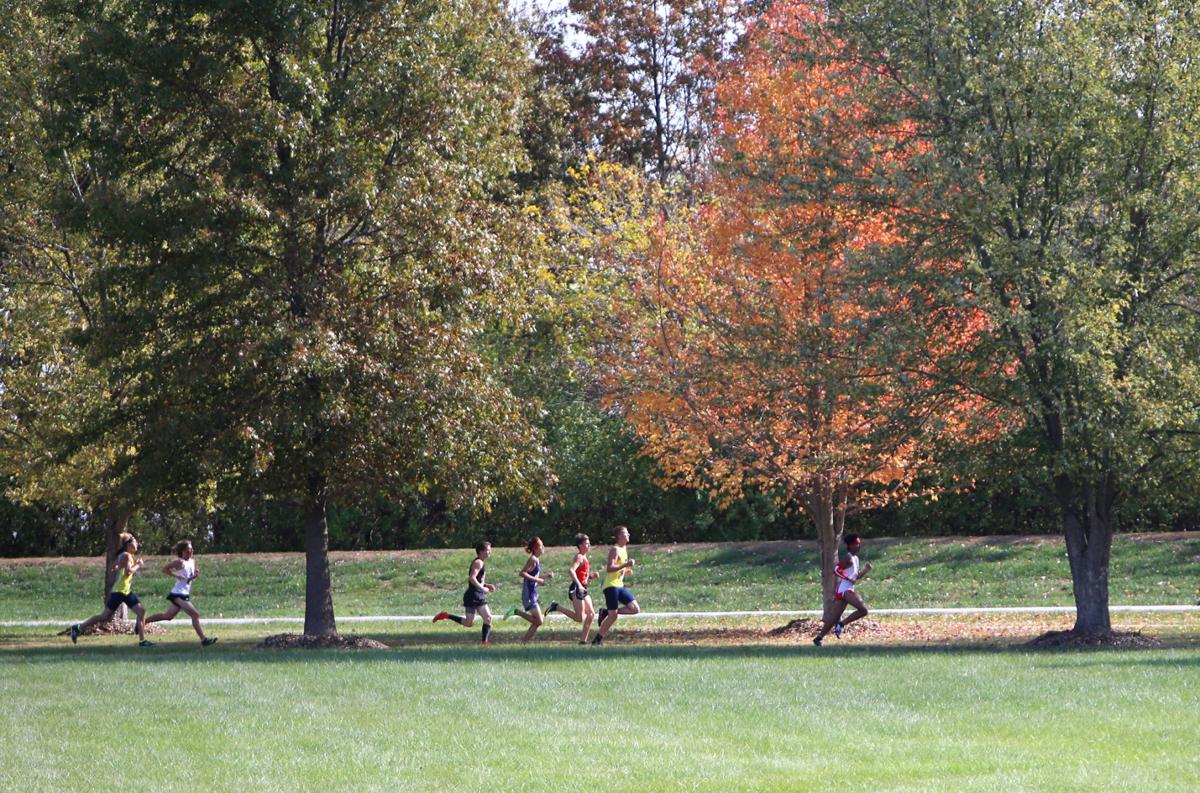 Fall foliage provided a stunning backdrop for portions of the first flight boys race at the Highland 2A Regional held Saturday at Fireman's Park in Alhambra. 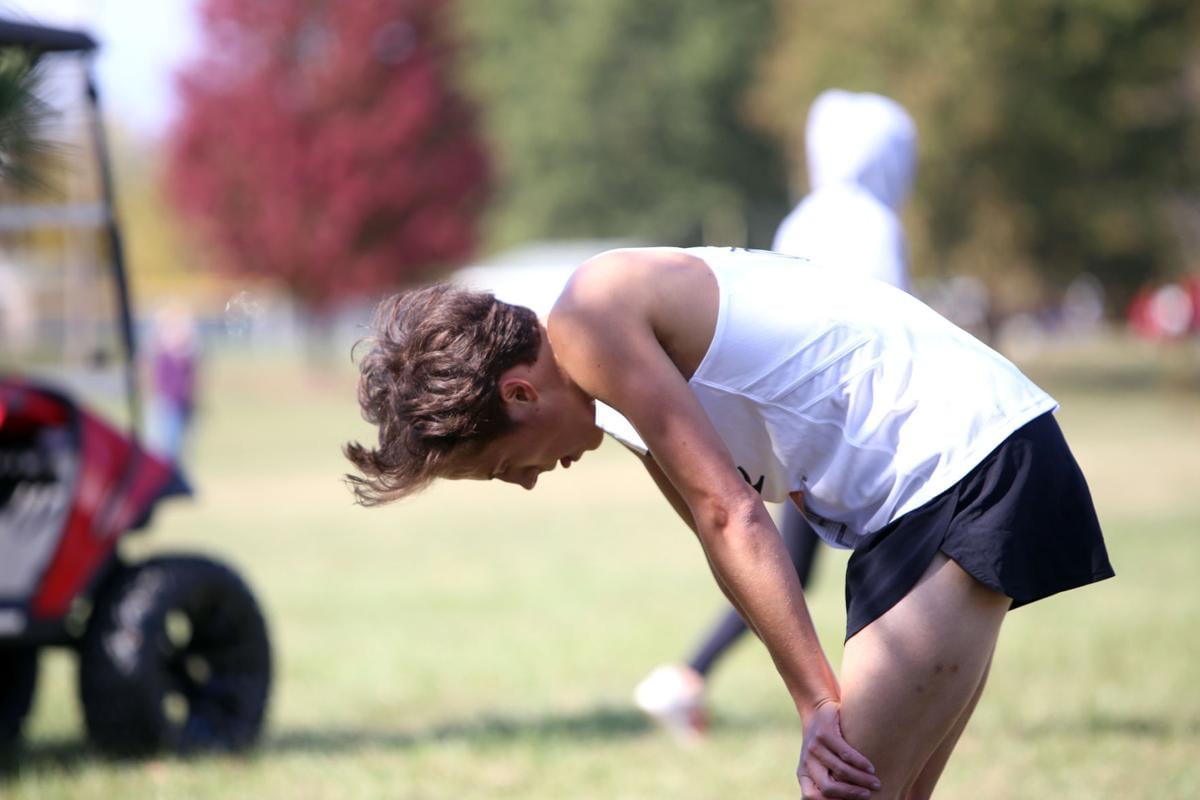 Carbondale's Alex Partlow catches his breath after winning the first flight boys race at the Highland Class 2A Regional held Saturday at Fireman's Park in Alhambra. 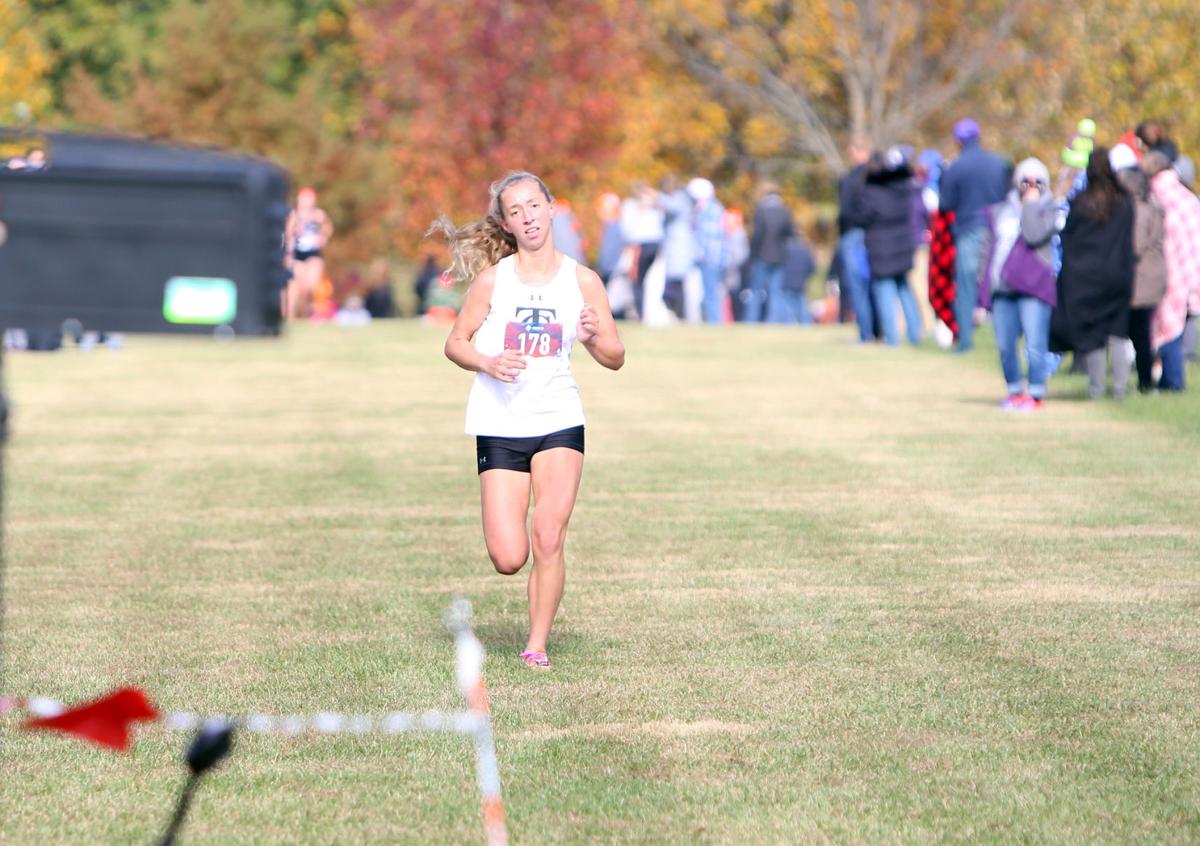 Carbondale's Madeline Prideaux crosses the finish line in the first flight of the Highland Class 2A Regional girls race on Oct. 24 at Fireman's Park in Alhambra. 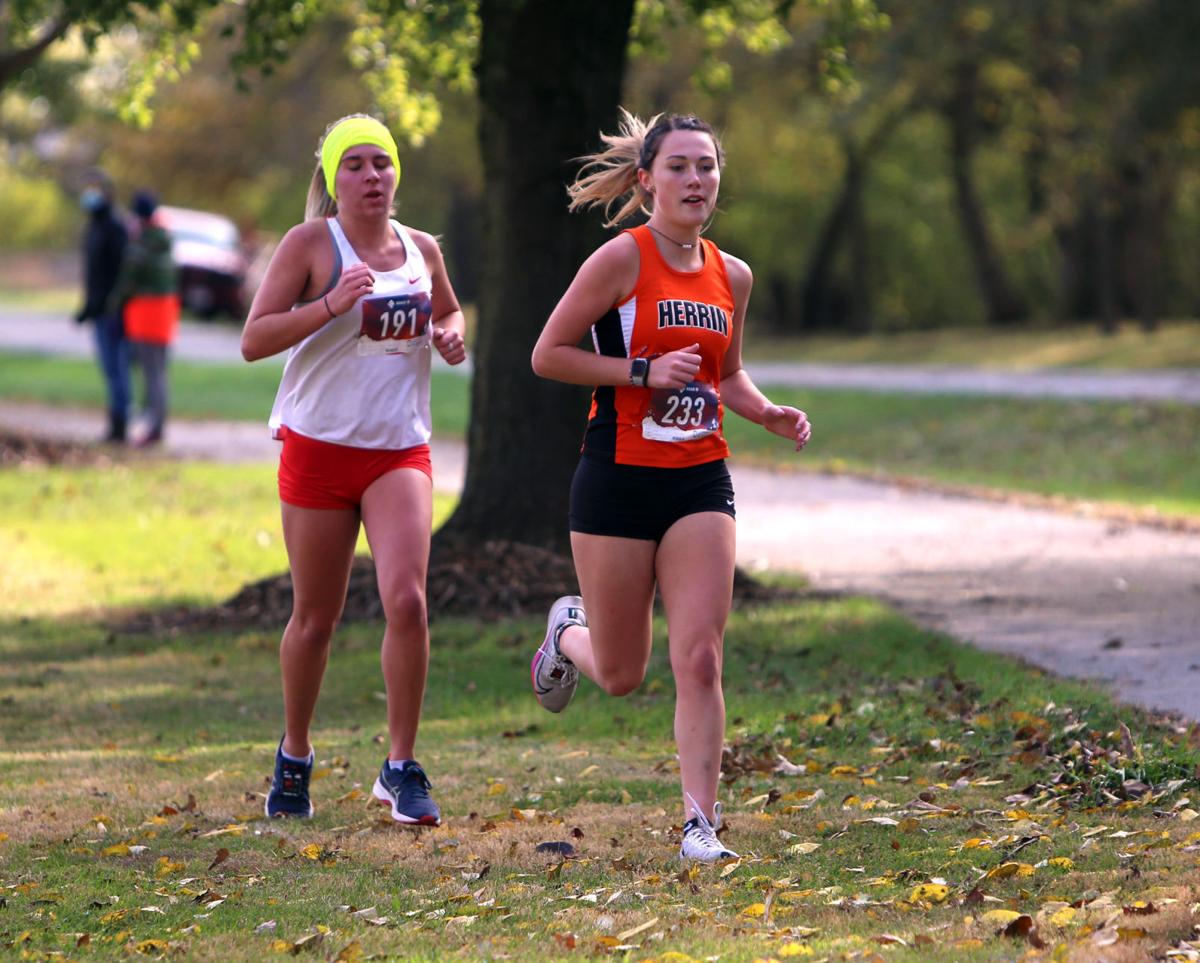 Herrin's Ainsley Farmer runs next to Centralia's Jamesyn Lyons in the first flight of the Highland Class 2A Regional girls race Saturday morning at Fireman's Park in Alhambra.

Carbondale cross country runners Alex Partlow and Tucker Poshard did their best impressions of Ricky Bobby and Cal Naughton Jr. once again during the top-flight race at the Class 2A Highland Regional held at Fireman's Park in Alhambra on Saturday.

For those unfamiliar with the comedy "Talladega Nights" and its characters Bobby and Naughton, it was always Naughton setting up Bobby for victories before jealousy boiled over.

But in this case with the senior Poshard comparing himself to Naughton, he's totally fine with seeing junior Partlow pass him up and cross the finish line — such as Saturday when he was the top individual runner in 15 minutes, 17.4 seconds on the 3-mile course.

"It annoys me because at the end of every race he just sprints," Poshard said before cutting off his own sentence. "No, I'm kidding. I've run with him since the sixth grade and he's a year younger than me but we've always ran together. We've kept it up for about seven years now and it's mainly a friendship thing."

Poshard finished third Saturday with a time of 15:40.6, with Marion freshman Dylon Nalley squeezing in between at 15:29.

Mascoutah ultimately edged Marion for the regional's team title, but the Wildcats and Carbondale were both among the five teams advancing to next weekend's Olney Sectional, which as of now is the final event of the postseason.

"I stayed behind Dylon and Tucker and they kind of traded first and second," Partlow said. "I only slept like three hours (Friday) night so I was trying to chill for this race and see where it led me. The first part I didn't feel very good but the second half I felt really good."

Partlow likes to follow the taller Poshard and let him guide the path before turning on the jets at some point late in the race. At Fireman's Park, that was after navigating a small opening around a lake and also slipping on a tree root.

"I probably should've left earlier but there was a loop around the lake and I just went for the straightaway," Partlow said. "It's a really nice course and a really nice day. At first I thought we were going to have a pretty cold race but right before it started it became beautiful out here."

The regional was broken up into three flights for both the boys and girls races, with teams allowed a maximum of three runners per flight. Carbondale's third runner in the top flight was Ethan Stevens and he finished 13th overall in 16:30.7.

"Our boys ran well today," Baker said. "This is a season that I never would've predicted in my lifetime. We went from running a race all season long where all of our guys got to run together at the same time and we come into a format where you're splitting your team up into three different groups. It changes the dynamic because when you're used to running as a pack and pacing off other people, it changes how an athlete looks at the race while they're in it."

A rematch with the Indians comes very soon.

"Mascoutah is a very good team and they've got really good depth," Baker added. "We hadn't lost all season and maybe it will wake our guys up a little bit. Maybe it will let them know that we've got work to do next week. We get to race them again and maybe the outcome will be different."

Partlow and Poshard might have something to say about that as they'll work their slingshot one more time. But in Saturday's race, they had a Wildcat named Dylon Nalley in the middle.

"Through the season he's really closed in on Partlow," Baker said. "Last week when Partlow and Poshard took the first two spots and Dylon was third, I think it bothered him. He really prepared for the race today mentally and knew what he needed to do. Partlow is a phenomenal racer. Dylon was close to him the whole race and the last 400 meters he really put a surge in and opened up the gap on him."

That surge, however, is Partlow's signature move.

"He really is aggressive," said Carbondale coach Greg Storm. "We kind of have to hold him back honestly. We have to tell him to relax in the first half because he'll go out so hard. He's starting to understand more how that benefits him."

"I was supposed to stay with the front people and see what I could do from there," Prideaux said. "The first mile was really fast though and I couldn't hang on. … This course is fast but it's tough. Once you get past the lake there are another set of hills to go over. And the finish is all uphill too. I think I did my best and that's all I can do."

Storm is sensing a better race from his senior standout at the sectional, which will be held Oct. 31 at Olney Central College.

"She got gapped a little bit and I think next week it will just help her better understand to just get out there with them," Storm said. "We were really relying on our top three and Madeline had a great performance. I know she wasn't happy but she was still all-regional and the others hung in there for us.

"My back half is all freshmen so they don't have any clue what is going on. They're just out here running. So we get to go another week. It was a good day for the girls for sure."

Mascoutah also won the girls team title with a sixth-runner tiebreaker over Highland. Mount Vernon's Britney Brown, who placed eighth overall in 19:53.3, was one of the individuals to advance not on a qualifying team.

Carbondale junior Alex Partlow capped his comeback from a hip injury that sidelined him all last year by winning the Class 2A Olney Sectional.

Carbondale's Alex Partlow approaches the finish line ahead of Marion's Dylon Nalley during the first flight boys race during the 2020 Highland Class 2A Regional at Fireman's Park in Alhambra.

Fall foliage provided a stunning backdrop for portions of the first flight boys race at the Highland 2A Regional held Saturday at Fireman's Park in Alhambra.

Carbondale's Alex Partlow catches his breath after winning the first flight boys race at the Highland Class 2A Regional held Saturday at Fireman's Park in Alhambra.

Carbondale's Madeline Prideaux crosses the finish line in the first flight of the Highland Class 2A Regional girls race on Oct. 24 at Fireman's Park in Alhambra.

Herrin's Ainsley Farmer runs next to Centralia's Jamesyn Lyons in the first flight of the Highland Class 2A Regional girls race Saturday morning at Fireman's Park in Alhambra.