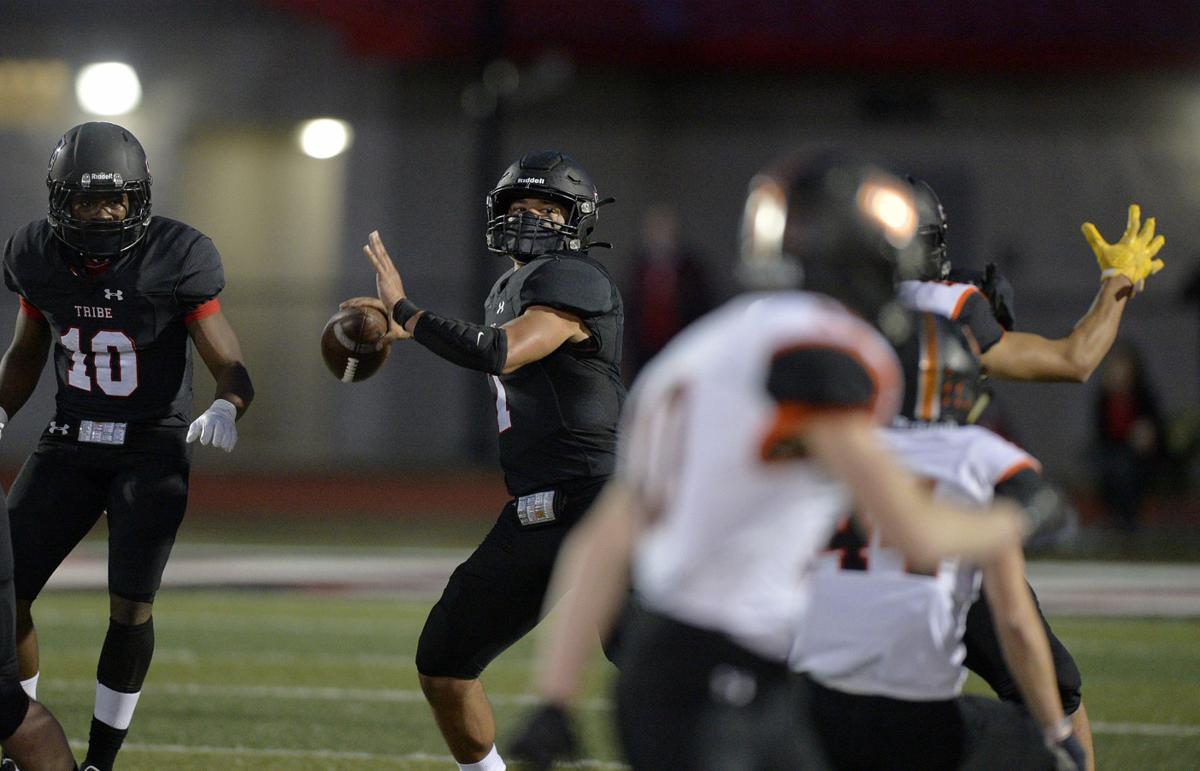 Johnston City quarterback Austin Brown (1) looks to pass during the second quarter against Chester on March 27 in Johnston City. 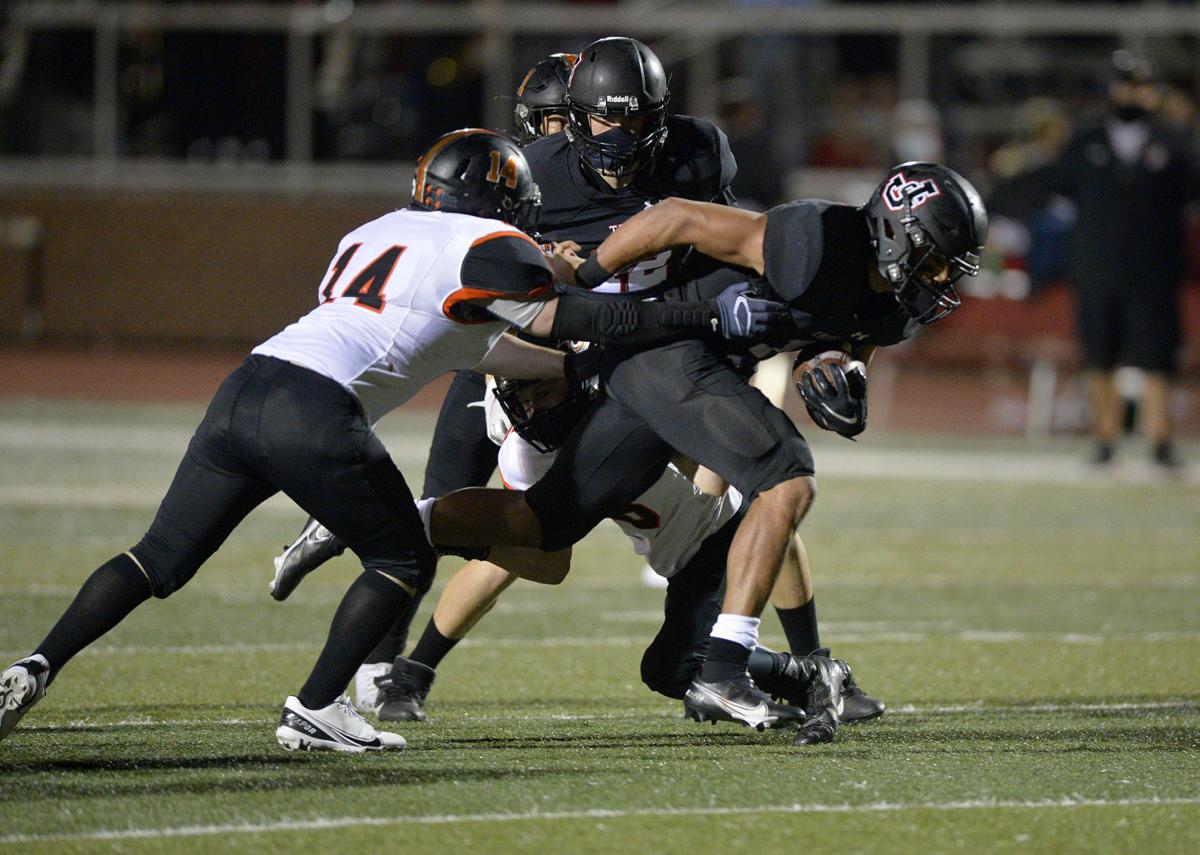 The game was in the bag. Johnston City led Chester 32-15 in the last two minutes last week and only needed to take a couple of knees to run out the remaining clock.

But Indians coach Todd Thomas was having difficulty convincing his star player that he could take a rest.

“I work so hard for it,” said Austin Brown, “so I’m trying to be out there every minute of the game.”

Thomas eventually got Brown out of the game, but when Johnston City visits Sesser-Valier Saturday in a Black Diamond Conference contest, he’ll have Brown back in there. Every snap, on both sides of the ball.

You would, too, if your main man was up to 17 FBS offers and counting before the halfway point of his junior season. The 6-1, 200-pound Brown has heard from name-brand programs like Michigan, Iowa State, Northwestern, Louisville, Cincinnati and Wisconsin, as well as Illinois and a handful of Mid-American Conference programs.

A quarterback and safety for the Indians (2-0), Brown has rushed for 127 yards and three touchdowns on 19 carries while throwing for 219 yards and another score. He also has nine tackles and isn’t afraid to deliver a big hit.

“His performance speaks for itself,” said Thomas. “Defensively, he’s kind of dominant. His football IQ is growing. And he’s a fierce competitor.”

Brown’s competitive juices were another reason Thomas was eager to get him on the sideline. He drew a flag for a late hit on the Yellow Jackets’ final touchdown drive, and with the visitors already frustrated with the game’s eventual outcome, Thomas saw no reason to risk injury.

The last time a player from Southern Illinois was this heavily recruited was in 2017, Luke Ford’s senior year at Carterville. Rated as the state’s top prospect by multiple websites, the tight end was wooed by college football’s upper crust before signing with Georgia.

Ford caught one pass in 2018, then transferred to Illinois to be closer to his ailing grandfather. He wasn’t allowed to play in 2019 after the NCAA denied his hardship waiver in a controversial ruling, then saw part-time duty last year and grabbed two passes.

Brown could join Ford in Champaign, or he could go somewhere in the Big Ten, Big 12 or the Atlantic Coast Conference. How Brown’s recruiting has blown up in the manner it has can be attributed to hard work, skill and a matter of being in the right place at the right time.

“It’s definitely an adventure, but I love it,” he said of the non-stop attention from FBS schools. “I’m talking with coaches all the time. I’m always busy, but I’ll look back on this one day and it will be cool.”

There was a lot of hype surrounding Brown when he started his freshman year at Johnston City in both football and basketball. A trip to a football camp at Ohio State before his sophomore year centered the hype around the oblong ball.

“He really got noticed,” Thomas said.

Another trip to Ohio State last summer for an elite prospects camp started the avalanche. Iowa State weighed in with the first offer, seeing him as a running back. Boston College checked in soon after, and the rest has been a steady torrent.

Getting an offer last week from Michigan was at once an honor and humorous for Brown.

“It’s pretty wild since I’m a lifelong Ohio State fan, but Jim Harbaugh’s a legendary coach and I have a lot of respect for him,” Brown said.

Most schools see him as a safety in college, although a few believe he could project as an outside linebacker. Given his quickness and willingness to deliver big hits, a hybrid position wouldn’t be out of range.

Regardless of what happens — Brown aims to make a decision on his college destination before his senior year starts — he wants to go somewhere that will help him succeed on and off the field.

“The NFL would be great, but it doesn’t happen for everybody,” he said. “I want to go to a school that has a major in construction management or something similar. Football isn’t always going to be there.”

But thanks to football, and Brown’s competitive fire, he’s going to be able to use it to create an opportunity to get an education that will get him off on the right foot in life.

Junior quarterback Austin Brown rushed for 109 yards and passed for a touchdown to lead Johnston City to a road win over Sesser-Valier Saturday in the Black Diamond Conference.

Johnston City quarterback Austin Brown (1) looks to pass during the second quarter against Chester on March 27 in Johnston City.