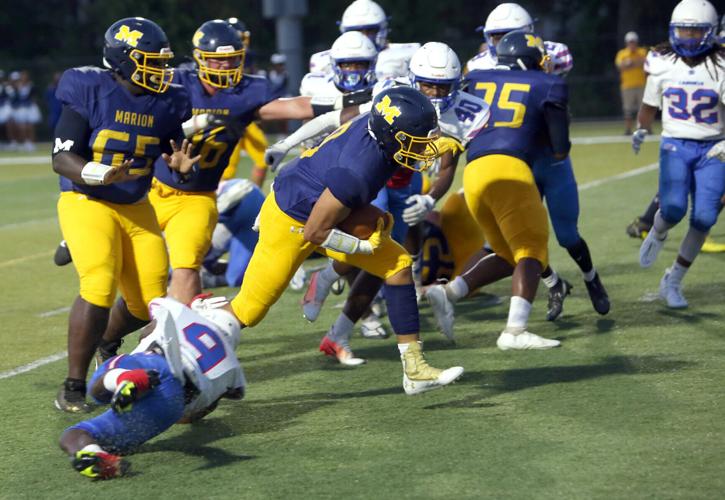 Marion's Jordyn Beverly breaks a tackle en route to scoring a 4-yard touchdown in the Sept. 16 game between Marion and Cahokia at Wildcat Stadium in Marion. 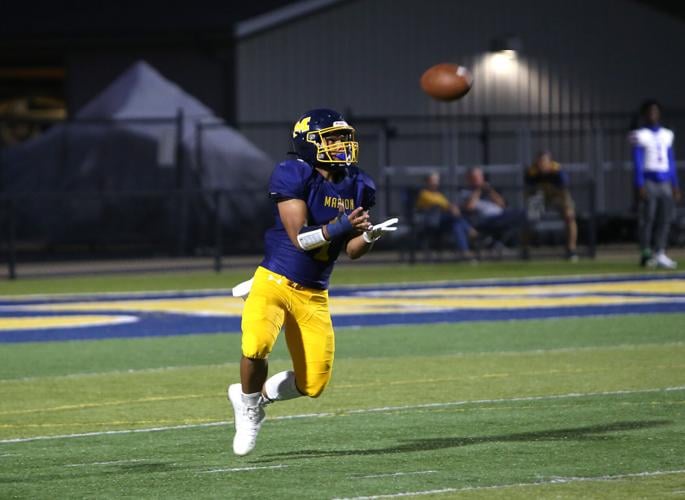 Marion's Patrick Walker catches a kickoff in Friday's game between Marion and Cahokia at Wildcat Stadium in Marion. 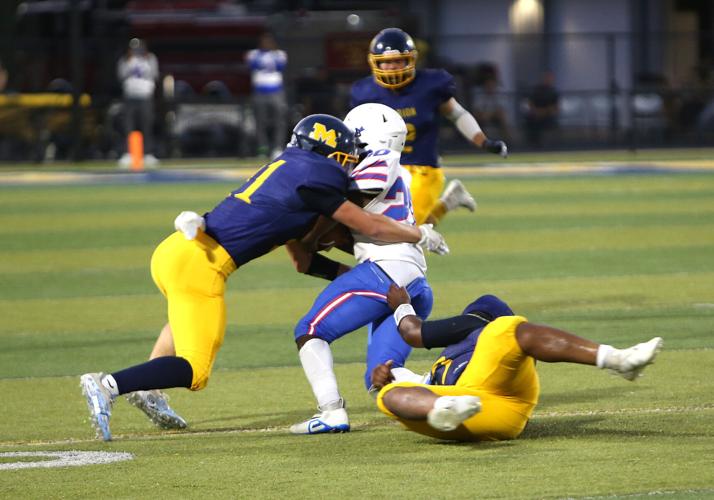 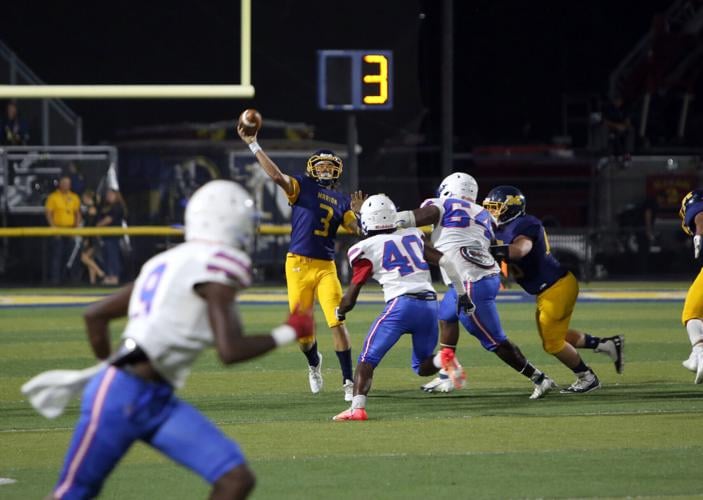 Marion's Evan Noelle attempts a pass in Friday's game between Marion and Cahokia at Wildcat Stadium in Marion.

MARION — Count Marion head coach Kerry Martin among those who are impressed with the play of the Mount Vernon Rams this fall.

The Rams, led by former head coach Dan Mings, are off to a 3-1 start, matching the record of the Marion Wildcats - the team picked to win the South Seven Conference.

What makes the Mount Vernon record even more impressive is the fact that the Rams had gone three full seasons without a victory. And player numbers had dropped into the twenties for the entire program. That has all changed this season with Mings' return. Player numbers have surpassed 80 and the wins have followed.

"They're playing well," Martin said of the boys from the King City. "Coach Mings has reignited a fire there. They have an explosive team with a lot of speed. It was obvious the last couple of years that they had some athletes. But now they're starting to put the pieces together. A lot of credit goes to Coach Mings and his staff. They're off to a very good start."

"We were struggling with inconsistency before last week's game," Martin said. "We needed more guys to make contributions and we needed to be more physical. I think we got back to that against Cahokia. We played much more like we are capable of playing."

The Wildcats only attempted five passes on the night, but didn't need to throw with the running game producing positive results. Junior halfback Patrick Walker led the way with 74 yards on 11 carries, including one 30-yard run and a 13-yard touchdown. Quarterback Evan Noelle, who completed one pass for 23 yards to Brody Larson, also rushed for 55 yards on six carries. Larson rushed for 47 yards on eight carries and added a 19-yard TD jaunt. Jordyn Beverly and Tommy Wiseman also contributed on the offensive end.

"Beating Cahokia was certainly a confidence boost," Martin said. "Now, we know we can play a good game against a good team. But we can't let up because we have a lot of good teams left on our schedule."

Martin said this week will surpass the midway point of the regular season.

"Now is the time for us to elevate our level of play," he said. "Mount Vernon brings a lot to the table. It will take a strong effort Friday to beat them. That's why we must do an even better job of executing our game plan and continue to build our team chemistry on the field. I think we learned a lot as a team from the last couple of weeks. What we have learned about ourselves needs to carry over from one week to the next. We need to put together a string of strong performances much like we did last year about this time."

Mings said beating Marion will be a chore.

"They have 18 years of building a tradition in football," he said. "Coach Martin, Coach Dunning, Coach Wimberly and Coach Skeete have been around for quite a while over there. There is a big difference between their program and ours right now. We're just trying to keep our heads above water. We're building our program from the bottom up."

Mings said Marion is hard to prepare for defensively because they have size on the offensive line and possess a balanced scoring attack.

"They have a couple of great running backs and a quarterback who can throw. It all comes down to wins the line of scrimmage. If we control the line, we will probably win. If they control it, they will probably win. Our goal now is to get to five wins and be playoff eligible. We're not thinking about anything above and beyond that right now."

Mings added that while there was no expectation of success prior to the season, each win builds confidence and expectations.

When you hear someone say “he wouldn’t be denied,” they might have had Carterville’s Bryce Smith in mind during the second half Friday night.

The staff of the Southern Illinoisan has made their picks for Week 6 of the high school football season.

Senior quarterback Reese Billingsley set two school records Friday to lead the Herrin Tigers to a 48-0 win over Massac County in a game cut short due to the mercy rule.

A fake punt led to the game-winning touchdown at the beginning of the fourth quarter as Benton won the battle for first place in the SIRR Ohio Division, 24-21, over Harrisburg at Taylor Field Friday night.

The Carterville Lions have remained undefeated and remain in the top spot for the third week in a row. Mount Vernon moves to number two after a big win over Marion.

State scores: See football finals from all around Illinois in Week 6

Want a score from outside the area? You can find it here.

The staff of the Southern Illinoisan has made their picks for Week 5 of the high school football season.

Carterville remains in the top spot, three South Seven teams crack into the top five, and a pair of unbeaten Black Diamond teams continue to climb the ranks.

The Mississippi Division of the River-to-River Conference championship is most likely on the line Friday evening when the Carterville Lions play host to the Nashville Hornets in football.

Marion's Jordyn Beverly breaks a tackle en route to scoring a 4-yard touchdown in the Sept. 16 game between Marion and Cahokia at Wildcat Stadium in Marion.

Marion's Patrick Walker catches a kickoff in Friday's game between Marion and Cahokia at Wildcat Stadium in Marion.

Marion's Evan Noelle attempts a pass in Friday's game between Marion and Cahokia at Wildcat Stadium in Marion.