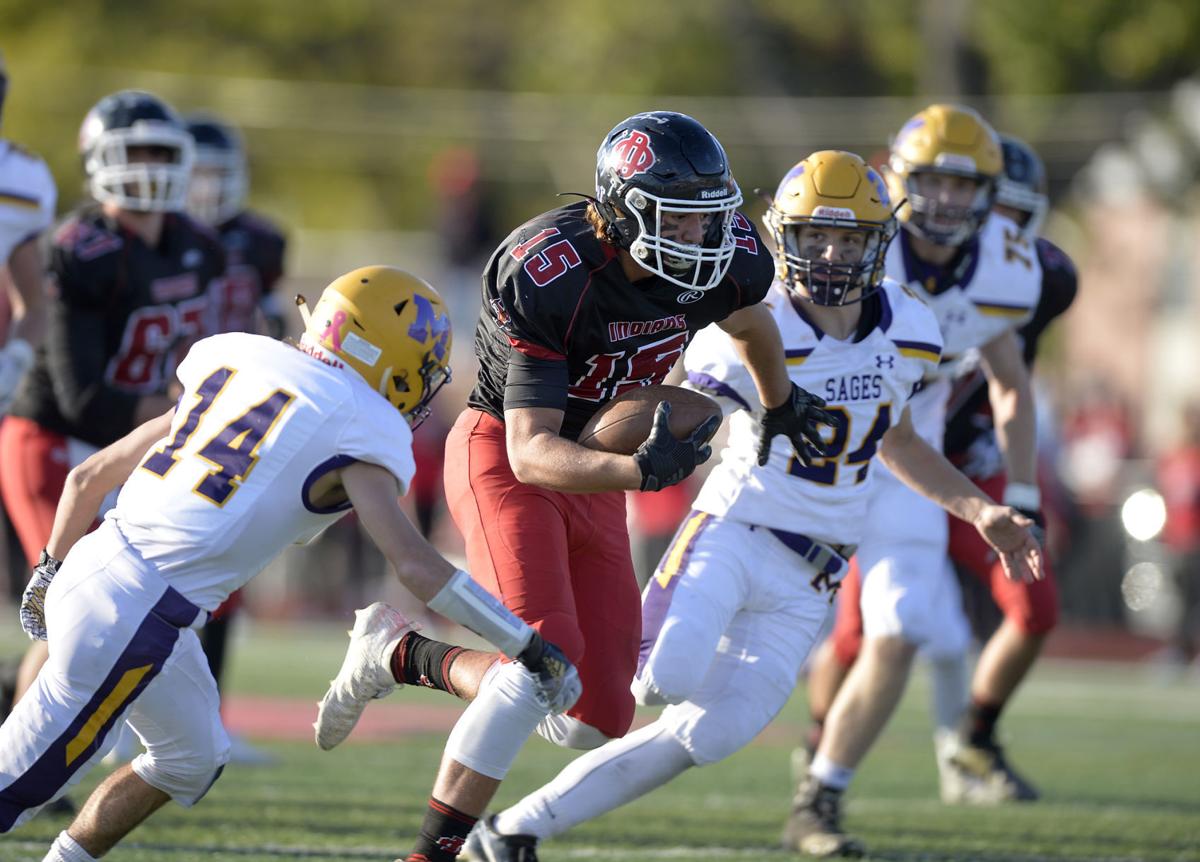 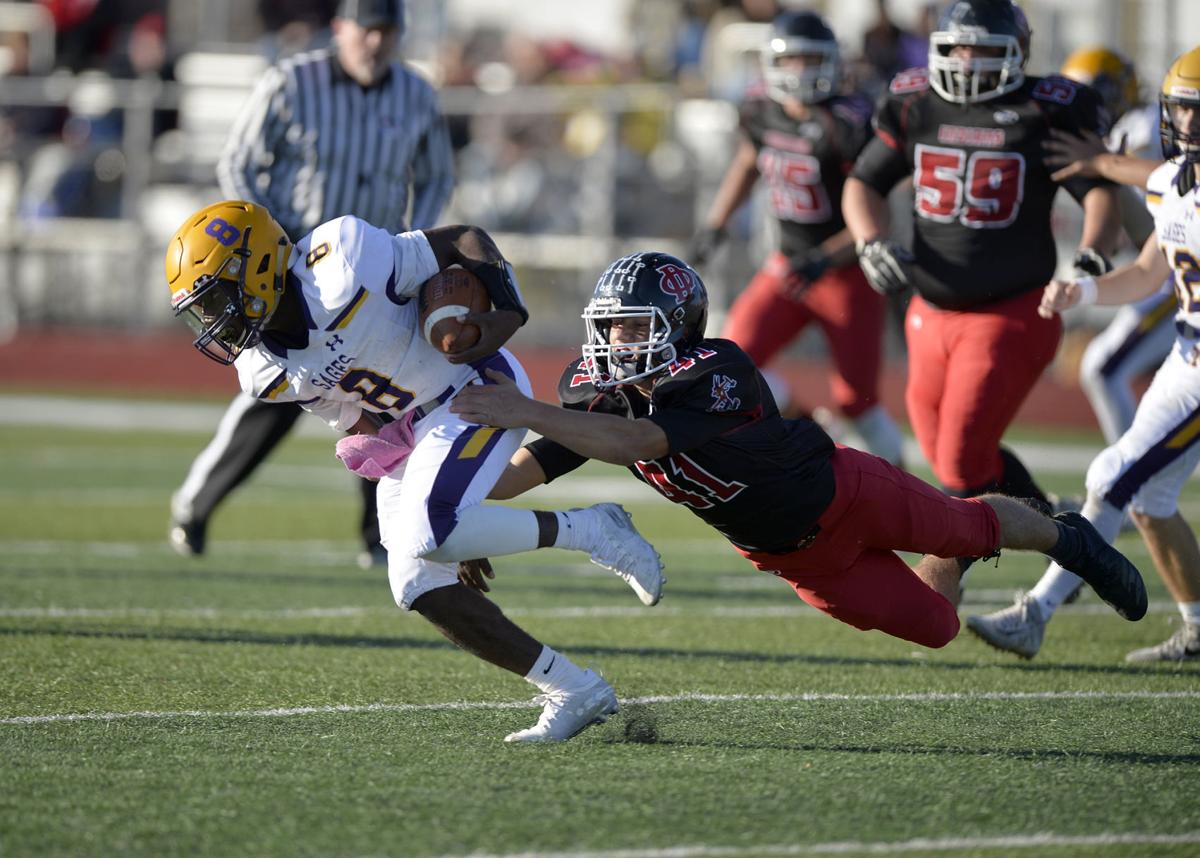 Du Quoin defensive lineman Chance Norris (41) slows down Monticello running back Chris Brown (8) during the fourth quarter of the 3A football first round playoff game at Van Metre Field in Du Quoin. Du Quoin would go on to win 28-25.

Du Quoin had one of the most exciting victories over Monticello in the first round of last week’s Class 3A playoffs.

After the Indians offense stalled in the red zone, the defense stepped up by forcing a fumble and having senior tackle Braden Higgins fall on the ball for a touchdown.

This week the seven-seeded Indians will travel to Williamsville and take on the two-seeded Bullets.

Williamsville continued its undefeated season with a 52-26 victory over St. Joseph-Ogden in the first round. The Bullets enter as the 47th ranked team in Illinois with an explosive offense that has racked up 490 points this season.

“They’re a very good football team that doesn’t make a lot of mistakes,” said Indians coach Derek Beard. “We have to do the same thing we did last week and not commit a ton of penalties.”

Du Quoin certainly proved last week that the game isn’t over until the final whistle. The Indians were able to rebound from their offensive struggles in the first quarter and overcome the 21-12 deficit.

Now at 9-1, the Indians hope to carry some of that momentum into Williamsville.

“We huddled up after the offense didn’t score on first and goal and told the guys that this game wasn’t over yet,” said Beard. “They kept playing hard and fought until the final whistle, which is what we’ve preached all season long. This time it really paid off.”

The goal was to host a playoff game and win it in front of their home crowd. The Indians accomplished just that as they look ahead to their next goal of defeating the Bullets.

“Whenever I was an assistant coach I looked ahead to our next opponent, but now the focus is on Williamsville,” said Beard. “We’ve talked about accomplishing our goals, and winning this game is our next one.”

The Bullets offense is led by junior quarterback Conor McCormick. McCormick has been highly efficient all season with a 24-1 touchdown-to-interception ratio.

McCormick is also a threat on the ground with 11 touchdowns this season. Between him and lead back Grant Ripperda, the Bullets have 30 of their 43 team rushing scores. Ripperda is a 1,000-yard rusher and has the second-most receiving touchdowns on the team with five.

The running game doesn’t stop there. Even Williamsville’s second back on the team, Stephen Gleason, has seven rushing touchdowns.

Du Quoin will continue to lean on its group of 11 seniors. Getting off to a better start this week on offense is important for the Indians, after tallying just 6 yards and one first down in the first quarter against Monticello.

“We need to be more efficient offensively early on,” said Beard. “Last week we had a snap go over our quarterback’s head that luckily resulted in a safety instead of a touchdown. Our guys will just need to continue to get better and improve.”

Last week marked the first playoff victory for Du Quoin’s players, and the expectation is to leave the second round with another playoff win.

“The seniors have done an excellent job of preparing and staying focused,” said Beard. “Winning their first playoff game is important for the players, but also for the entire Du Quoin community.”

The Indians were facing some injuries heading into the first round of playoffs but have since gotten healthier. Beard stated that this is the healthiest his team has been in the last few weeks.

The winner will advance to the quarterfinals game next week against the winner of six-seeded Mt. Carmel (9-1) and three-seeded Vandalia (10-0).

Known by her nickname, “Money,” Macey Davis has also been referred to as the drill sergeant of the Carbondale football team.

Who knows if or when there will be a “right time” to begin discussing when sports will make their grand return to hopeful fans, players, and c…

Du Quoin defensive lineman Chance Norris (41) slows down Monticello running back Chris Brown (8) during the fourth quarter of the 3A football first round playoff game at Van Metre Field in Du Quoin. Du Quoin would go on to win 28-25.