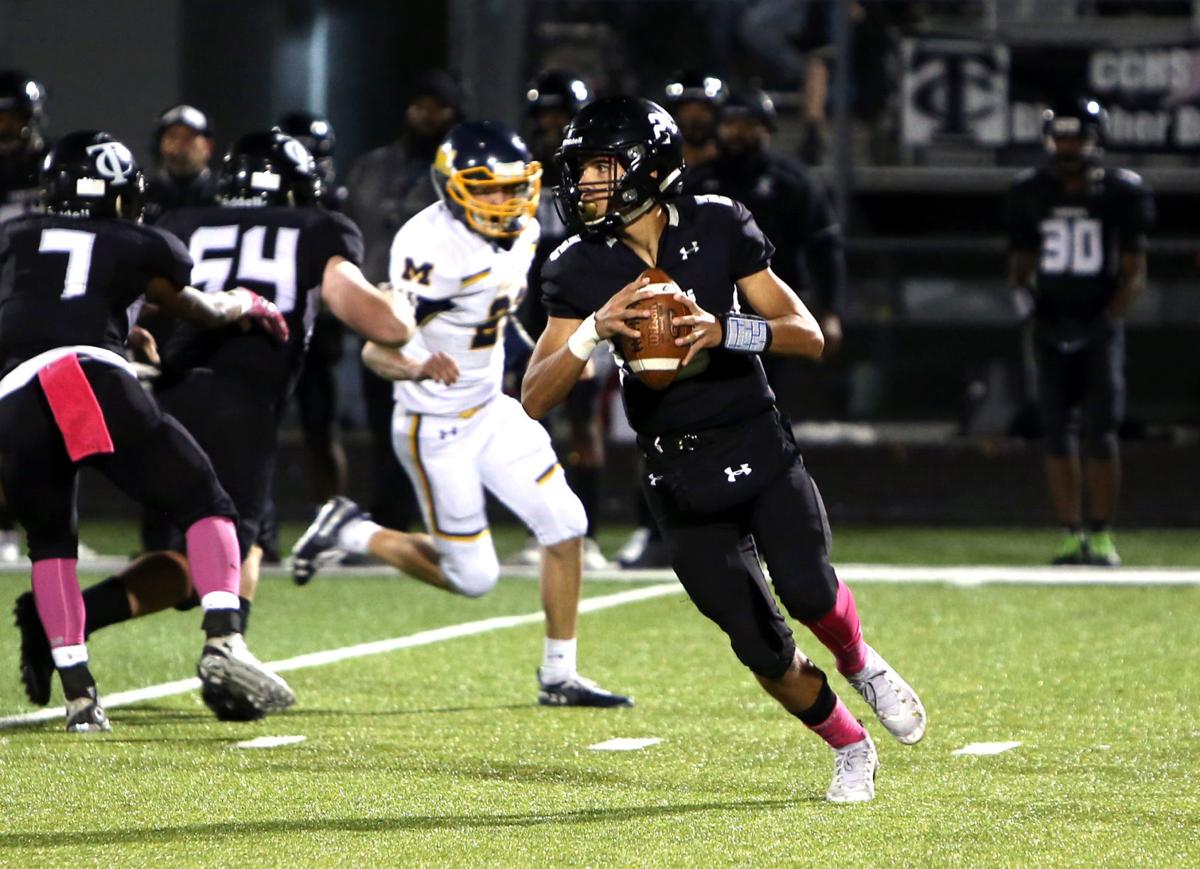 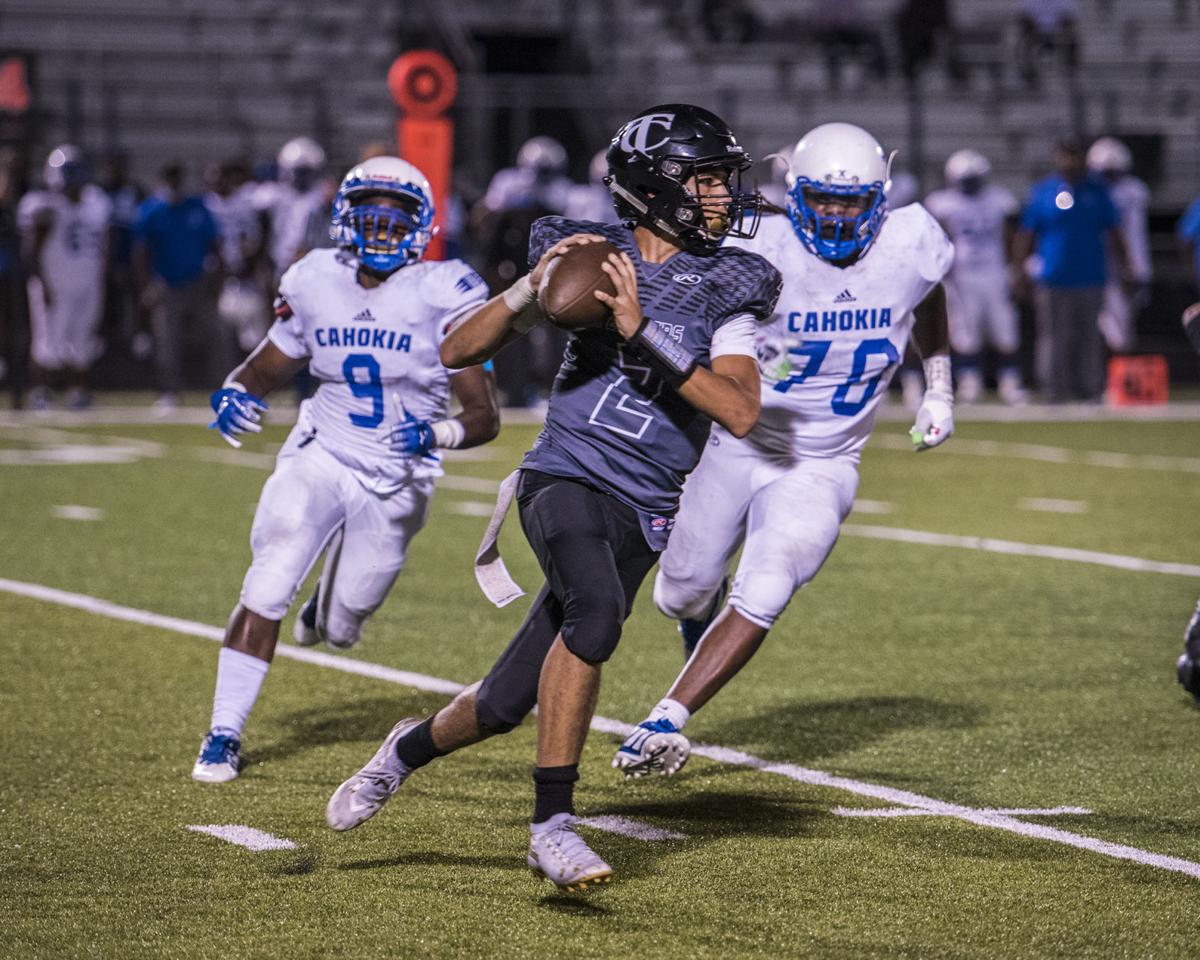 Carbondale quarterback Darius Ragland scrambles out of the pocket as he is pursued by Cahokia's Demarveon Johnson (9) and Thomas Dowell (78) in Carbondale. 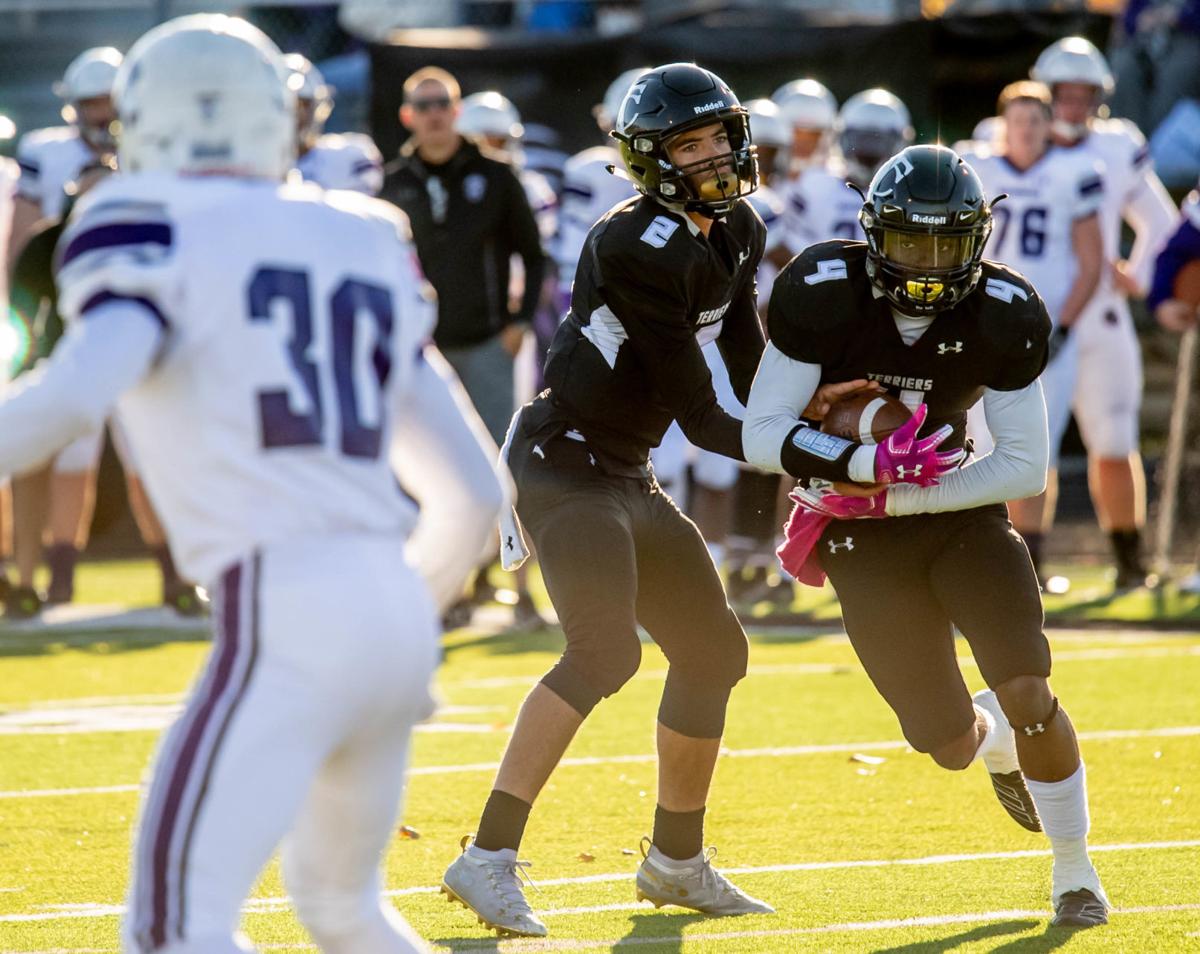 Carbondale Terriers' Darius Ragland (2) passes the ball off to Tavaris Macklin (4) during an IHSA Class 5A first-round game against the Mascoutah Indians at the Frank Bleyer Field in Carbondale.

Carbondale fans know Darius Ragland as the man under center for a Terriers football team that is just getting started according to Ragland and head coach Bryan Lee.

As the team continues to work around social distancing guidelines due to the COVID-19 pandemic, it’s becoming more clear for Ragland that last season’s Terriers team was just scratching the surface.

After getting called up to varsity during his freshman year, Ragland has rolled with the punches to help out his team in any way possible. The incoming senior entered high school mainly focused on playing defensive back, but served as Carbondale's backup quarterback during his sophomore year before taking over as the starter in 2019.

All it took was a 32-29 victory over Murphysboro in Ragland’s first game behind center to shake off his nerves. Ragland and the Terriers went on to tie Marion atop the South Seven Conference with an 8-2 record, but held the tiebreaker to win the division outright after defeating the Wildcats by 22 points in Week 8.

Ragland has dreamed of leading Carbondale to a state championship since he was a young boy and hopes to get another shot following an impressive junior campaign in which he combined for 27 touchdowns and nearly 2,300 total yards.

“I care less about the personal accolades and just want to help my team succeed,” said Ragland. “Last year was my first season at quarterback and I came in nervous to be a leader. Now, my goal is to become more vocal and support my teammates the way they support me.”

Amidst the coronavirus pandemic, Ragland still holds high hopes for when the football season does come around. With schools and training facilities shut down, Ragland and fellow friend-teammate, Gabe Hilliard, continue to find ways to train outside between agility ladder drills they find on YouTube, or just by running stairs.

Ragland and his teammates have played together since they were in junior high, so he knows there will be obstacles to overcome entering the football season. One of those obstacles being the distractions of video games and junk food during the stay-at-home order.

“We’re hoping to use it to our advantage because most people aren’t going outside due to the virus,” said Ragland. “We know how much is riding on the upcoming season because we know that we can win. We showed that during our undefeated seasons in junior high.

“Give it a month back on the football field and we’ll be ready.”

Coach Lee and his coaching staff are working vigorously to keep in touch with players, while also sending out game film and playbooks for the kids to study at home. With most high school athletes playing both sides of the football, Ragland’s versatility doesn’t allow him to play defense for the Terriers as the team's quarterback.

Instead you can find Ragland cheering on the defense from the sidelines no matter how much he begs and pleads his coaches to put him in on defense. Ragland has hopes of playing defensive back in college, but leans on his father Antonio for mentorship during his high school days under center.

“My dad has always been a major influence in my life,” said Ragland. “He’s taught me so much discipline and was the one who influenced me to try out playing quarterback. He was my coach growing up, and I know that some people think the coach's son always has it easy, but that wasn’t the case.”

Ragland says he uses his experience playing defensive back as a tool to help him read defensive coverages as a quarterback. Anytime he sees a cornerback pressed up on one of his receivers he instantly recognizes man-to-man or a Cover 2 defense.

The building blocks of playing defensive back in college are already being put in place by Ragland. With a lot of summer training camps coming up, Ragland has already received invitations to play for the U.S. National Team and Mega Camps for colleges to scout his talents.

Ragland has put his defensive skills on the radar by winning the Gold Ball MVP Award at a major Chicago tryout, and then going on to return an interception for a touchdown in the All-American Bowl held in Dallas. The sacrifices of being a team leader and quarterback for the Terriers hasn’t gone unnoticed by Lee and his coaching staff.

“(Darius) is one of the best defensive backs in the state and he doesn’t get to play it here,” said Lee. “It says a lot about his talents to still be getting recruited as a defensive back. He is such a team player that he sacrificed playing defense because we need him at quarterback.”

Ragland has hopes of staying local and playing for SIU following his senior season.

“I’m always talking to Coach Lee on the sidelines to try and get him to put me in on defense,” said Ragland. “I tell him all I need is one play in the fourth quarter and sometimes he’ll put me in there just to put a smile on my face.”

Carbondale quarterback Darius Ragland scrambles out of the pocket as he is pursued by Cahokia's Demarveon Johnson (9) and Thomas Dowell (78) in Carbondale.

Carbondale Terriers' Darius Ragland (2) passes the ball off to Tavaris Macklin (4) during an IHSA Class 5A first-round game against the Mascoutah Indians at the Frank Bleyer Field in Carbondale.