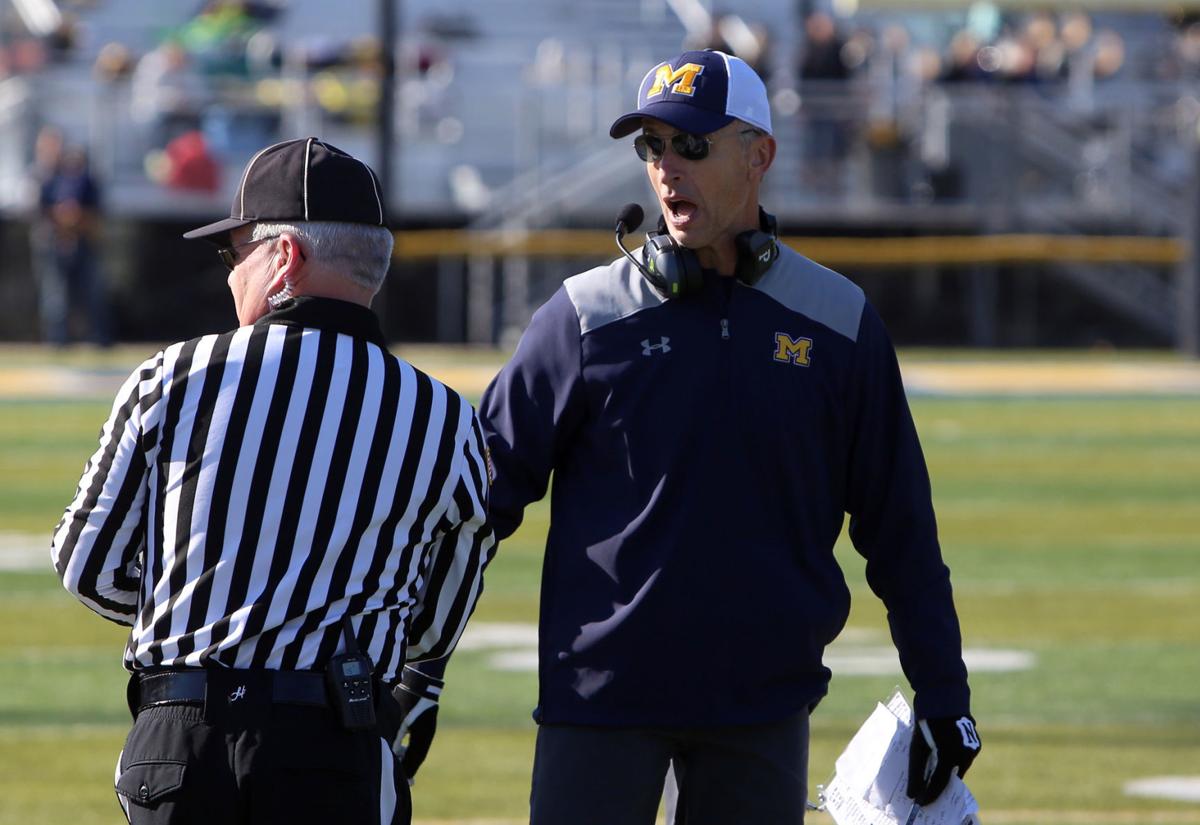 Marion head coach Kerry Martin talks to an official during a 2019 IHSA Class 5A playoff game between Marion and Troy Triad at Wildcat Stadium in Marion. 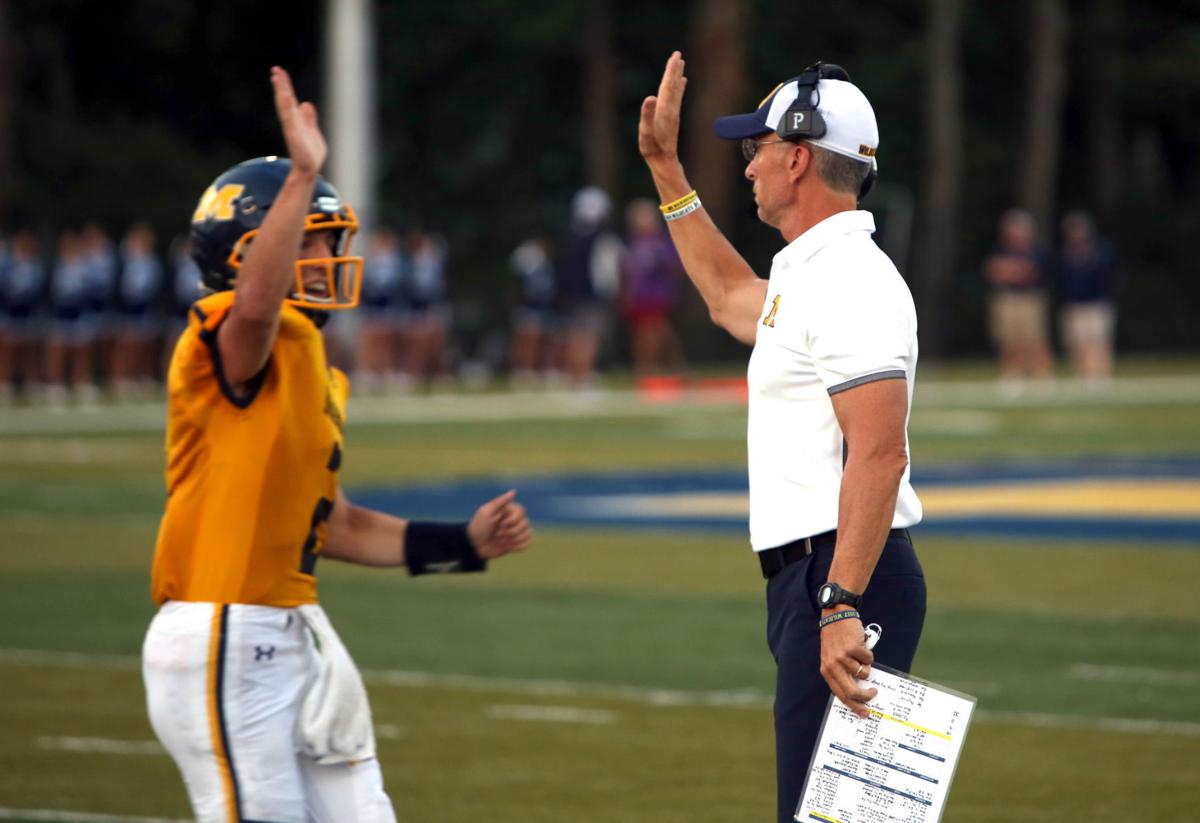 Marion head coach Kerry Martin gives a high five to quarterback Lucas Will after Marion's first touchdown in the first half of a 2018 game against Jerseyville at Wildcat Stadium in Marion. 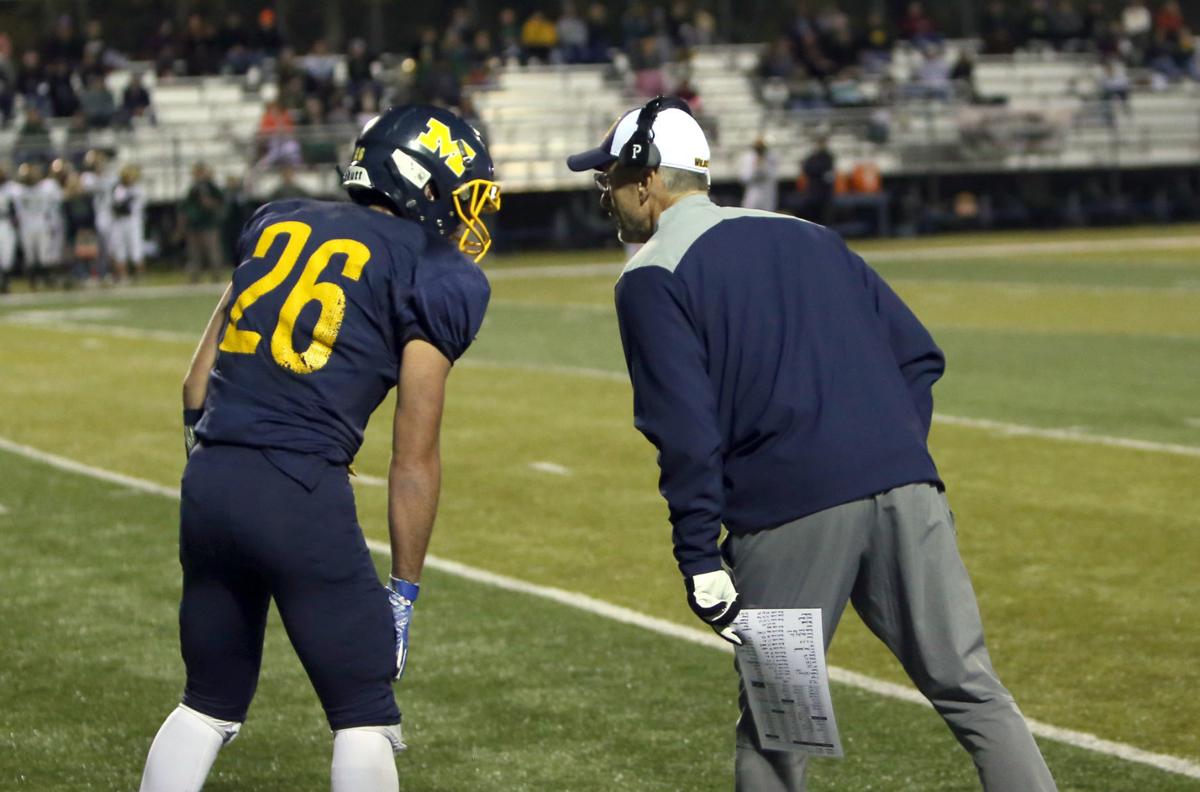 Marion coach Kerry Martin sends in a two-point conversion play with Drake Gravatt during the first half of Friday night's game between Marion and Mattoon at Wildcat Stadium in Marion.

But that’s not the way he rolls, which is why one of the best football coaches in Southern Illinois history continues to evolve and adapt.

“Society changes faster, more now than ever,” Marion athletic director Ryan Goodisky said. “You have to keep up with it, and he’s one of the best at it. I was talking with him a couple of weeks ago and he had just finished a three-hour webinar clinic with a bunch of other coaches.

“He’s looking into changing how kids and coaches go into and use practice every single day. More rest in between reps and maximizing reps, so you can peak on game nights. Think about a guy who’s doing it for 30-plus years, just retired from teaching, and he’s about to go to a different way of coaching.”

Martin’s thirst for knowledge, need to learn and competitive spirit have made him a coaching icon. However, it goes way beyond wins and losses. This is a guy who has affected lives on and off the field.

Take, for example, Carterville football coach/athletic director Brett Diel. He was a starter on Martin’s 1996 Lions team that went 14-0 and won the Class 3A title. That Diel became a coach and history teacher had more than a little bit to do with Martin.

“I don’t think I’d be in the position I’m in today without the influence of Kerry Martin,” Diel said. “I found a passion for coaching and for teaching history. He taught me in high school, and I taught history for 14 years. He showed me a path that I thought would be fun, and it has been.

“When I think of him, I think about the culture and impact he has on everybody’s lives. As we get older, I look back and know how lucky I was to have an opportunity to play for someone like that.”

The 56-year old Martin played football and baseball at Salem High School, graduating in 1982. He didn’t play sports at SIU, graduating in 1986. Four years later, Martin was running a sideline for the first time as Sparta’s coach.

A 7-3 debut season was a sign of things to come. From there, he went 18-11 in three years at Flora with two playoff appearances. Then Martin took over at Carterville and produced the school’s only state title in football three years later.

Martin can still remember how his team wiped out a two-touchdown deficit in a semifinal game against Du Quoin. More vivid to him was how smart the Lions were, a trait manifested years after they took off football uniforms for the last time.

“That group has produced amazing men – doctors, lawyers, architects,” Martin said. “The resilience and smarts of that group … game plans were easily understood. There are different kinds of smarts – game smarts, football smarts – and they had both.”

That state title aside, Martin’s run at Marion has arguably been the crowning achievement of his career. Prior to his arrival, the Wildcats were the football equivalent of the Washington Generals, an opponent to be defeated and occasionally clowned.

Aside from Mike Rude guiding them to five straight playoff berths from 1985-89, they owned precisely one postseason appearance in program history. At first, it looked like Martin would be like all the others, doomed to fail amid all the obvious and perceived obstacles.

“The first three years, we won a total of eight games,” he said.

The guy who had won all his life had to figure out a new way. He changed everything in the program for his fourth year, from the way they trained to the way they played. More importantly, he had players who were willing to forget all the old excuses and forge their own identity.

“They put both feet in the boat,” Martin said.

Marion went 5-5 in 2005. The next year, it went to the 5A quarterfinals, and followed that up with a trip to the semifinals in 2007. The Wildcats have reached the playoffs in 15 consecutive years, a run of consistency few schools anywhere can match.

Martin retired from teaching in the spring, but those around him on a daily basis say he’s energized for another year on the sideline. He’s ready for a new way of teaching, a new way of coaching and the same old winning.

On and off the field, Martin continues to make his mark.

“He’s a great role model, not just for kids, but for other coaches,” Goodisky said.

This is the forth in a 10-part series on the top prep coaches in Southern Illinois history. They were chosen on a basis of won-loss record, state championships and impact off the field. This series will run every Sunday and Wednesday until July 22.

Wayne Harre has won a state championship as a head coach, been part of others as an assistant coach in softball and nearly won a second state title just two years into his new gig as Nashville’s boys basketball coach in 2019.

Marion head coach Kerry Martin talks to an official during a 2019 IHSA Class 5A playoff game between Marion and Troy Triad at Wildcat Stadium in Marion.

Marion head coach Kerry Martin gives a high five to quarterback Lucas Will after Marion's first touchdown in the first half of a 2018 game against Jerseyville at Wildcat Stadium in Marion.

Marion coach Kerry Martin sends in a two-point conversion play with Drake Gravatt during the first half of Friday night's game between Marion and Mattoon at Wildcat Stadium in Marion.