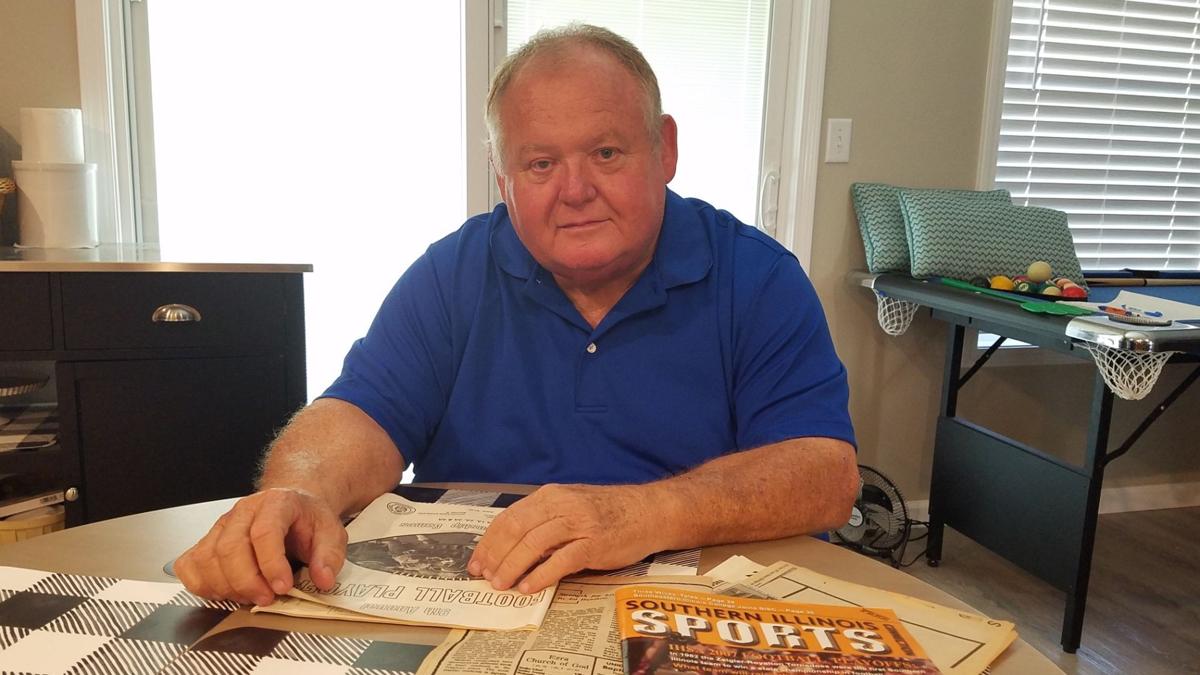 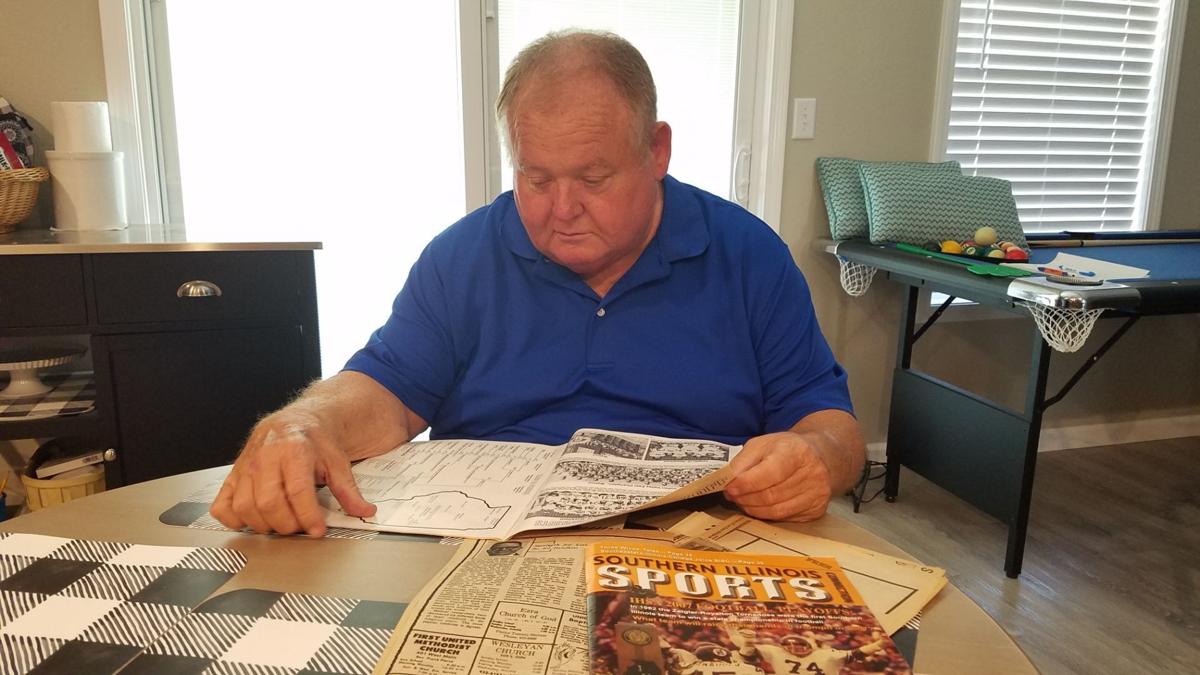 ZEIGLER — John DeNosky vaulted himself into the Southern Illinois coaching spotlight during a rather brief, but powerful tenure as head football coach during the 1980s at Zeigler-Royalton High School.

In that decade, the Tornadoes twice posted undefeated regular seasons, including the region's first state championship in 1982.

A Hurst-Bush native, DeNosky played on both the offensive and defensive lines for Herrin in the late 1960s, graduating in 1970. He and his teammates laid the groundwork for a 27-game win streak that followed (1971-73) under Paul Restivo.

DeNosky said what he learned as a player from his high school coaches — Restivo, Chuck Koerner, Bill Bonali, Bruce Jilek, Steve Bailie and Gary Hernbeck — helped him develop his own coaching philosophy.

"They helped me learn the ins and outs of the game and I added to it in the years ahead," said DeNosky, who went on to earn his teaching degree in science and physical education at Southern Illinois University.

"When I got to college, I was either going to pursue medicine or coaching, and I chose the route of teacher/coach. I think I made the right decision for me."

In 1980, Z-R head football and basketball coach Art Brandon stepped down from his coaching duties and DeNosky applied for the football position. He was hired. Christopher native John Kretz was also hired as head basketball coach. The two served as assistants to one another when not coaching their sport. It was the beginning of a long-lasting friendship.

"I was excited about the Z-R job, but also scared at the same time," DeNosky recalled. "Being a head coach in a sport is a lot different than being an assistant like I was at Herrin. I knew I would have to work hard to be successful."

With a student enrollment of about 250, football had taken a backseat to basketball at Z-R for some time, as the Tornadoes captured consecutive regional hoop championships in 1979 and 1980.

Under DeNosky, football wouldn't be an after thought much longer.

The rookie coach took his lumps the first couple of seasons, but had a pretty good feeling about the makeup of his roster as the fall of '82 arrived.

Still, the Tornadoes were picked to finish third in the league that season.

"We (players and coaches) had an idea that it was going to be a good year," DeNosky said. "We felt we could compete in the Black Diamond Conference and make a run at the playoffs."

Z-R went 8-0 during the regular season with one bye week on the schedule.

"We had a couple of close calls," DeNosky said.

In Week 4, the Tornadoes slipped past visiting Sesser-Valier, 16-8, in double overtime.

The Week 6 home game with arch rival, Christopher, was a defensive battle with Christopher holding a 6-0 lead in the fourth period.

But then something extraordinary happened on fourth down as Z-R lined up to punt.

Sean Connor, the team's sensational quarterback and regular punter, had to exit the game for a play with an injury. All-South running back Matt Swalls was asked to take his place. The senior, who was kicking from about his own 20-yard line, launched a state-best 76-yarder that sailed over the head of Bearcats' return ace, Phil Steinmetz. The speedster raced back to retrieve the ball and brought it back a few yards before tackled near his own 20.

The dramatic shift in field position sparked the Z-R defense, forcing a Christopher punt. The Tornadoes went on to score the tying and winning touchdowns thereafter.

Z-R finished up regular season play with a 67-0 win over Edwards County and 33-6 win over Elverado.

The opening round of the playoffs in Class 1A was in Oakland, located north of Charleston. After a slow start, Z-R pulled away for a 38-3 victory. The Tornadoes followed with a 27-0 home win over Bement and 20-8 home win over Illiopolis, setting the stage for a state title game in Normal — home of the Illinois State Redbirds — against the Walnut Blue Raiders.

Playing in freezing temperatures and drizzle, the Tornadoes scored first and hung on for a 7-6 win for the ages.

"We got a lot of exposure in the press during the playoffs," DeNosky said. "After we won the championship, I got telegrams, letters and phone calls from people all over the state congratulating us. It was a very special time for all of us."

Z-R outscored its opponents a stunning 290-16 as the defense shut teams down. Carterville, Sesser-Valier and Johnston City all failed to score in league play. Elverado managed one touchdown and Christopher one field goal.

Z-R caught a tough break in the postseason, however, drawing perennial powerhouse, Casey, in the opening round. The Tornadoes led in the fourth quarter, but couldn't hold on, falling 22-20. From there, Casey went on to run the table in rather easy fashion for the state title.

"We had our chances," DeNosky said. "We were so close."

There wasn't as much success on the gridiron in the years to follow, and in 1990, the district agreed to drop the football program and began a cooperative agreement with neighboring Christopher. DeNosky was asked to serve as an assistant for the Bearcats and did so for three seasons before accepting a similar position in West Frankfort under head coach Ken Joggerst.

Reflecting back, DeNosky said he wishes he had singled out the efforts of his assistant coaches more often when his Z-R teams went on that early 1980s run.

"When you're young and inexperienced like I was, you can sometimes let success go to your head a little," he said. "I wish I had done a better job of talking about John (Kretz). I really respected him. He had an offensive background, having played ball at Christopher and then Rend Lake. He had a lot of insight into the game and was always so supportive of me."

Kretz said he has only fond memories of the years he coached at Z-R, adding that both he and DeNosky worked well together.

"John was an excellent coach. The kids played hard for him because they liked him. He had a special rapport with them."

Kretz said he and DeNosky were "fortunate" to have come along at a time when there was so much athletic talent at the school.

DeNosky, now 68, became principal at Zeigler-Royalton High School in the early 2000s. He stepped away from coaching in 2006 after becoming superintendent of schools at Trico. He retired from there in 2012.

"Personally, I think John deserves to go into the Illinois Football Coaches Hall of Fame," Blakely said. "He was the first coach to bring a state championship home to Southern Illinois in 1982 and then followed up with another undefeated regular season in 1985. He didn't have a long career as a head coach, but he had a very successful run at a very small school, where it's not easy to compete in a sport like football."

Blakely said "it's never too late" to recognize someone for his accomplishments.

Now battling Parkinson's disease, DeNosky lives at home in Carterville with his wife of 40-plus years, Cheryl, a retired teacher. The couple has two children and several grandchildren.

DeNosky said he misses the game of football immensely.

"I just miss everything — the contact with the players, the opportunity to teach kids the fundamentals, the strategy of play calling. Everything. My philosophy was that I wanted to do something different each game, especially right before the half, so other coaches would have to go in and start talking about it at halftime. Sometimes, the play worked and sometimes, it didn't, but they had to talk about it."

Asked if he feels snubbed by the Illinois Football Coaches Hall of Fame, DeNosky said, "That's not something I live and die for. Any kind of recognition like that makes you proud. It also would be something the school and community could be proud of, too. But the way I understand it, you have to be nominated by a coach. For whatever reason, that hasn't happened, and that's OK. I can live with that."

Prep Football | Carterville rallies to get past Du Quoin

CARTERVILLE — The game came back to Peyton Bittle.

The Nashville Hornets totaled 220 rushing yards in the first quarter to defeat the Anna-Jonesboro Wildcats 47-22 on Friday night. Nashville took a 47-0 lead into halftime with a running clock and rested its starters in the final two quarters. Hornets improve to 3-1 and 1-0 in the SIRR-Mississippi Conference while the Wildcats fall to 2-2 and 0-1 in conference play.

Benton senior Reid Baumgarte had the game of his life in a 53-0 victory over Pinckneyville on Saturday at Tabor Field.

Three weeks have come and gone for prep football teams this fall and it’s been fun.

It’s been 147 days since the last football game was played between Anna-Jonesboro and Nashville.

There are certain things in life one can guarantee will happen.