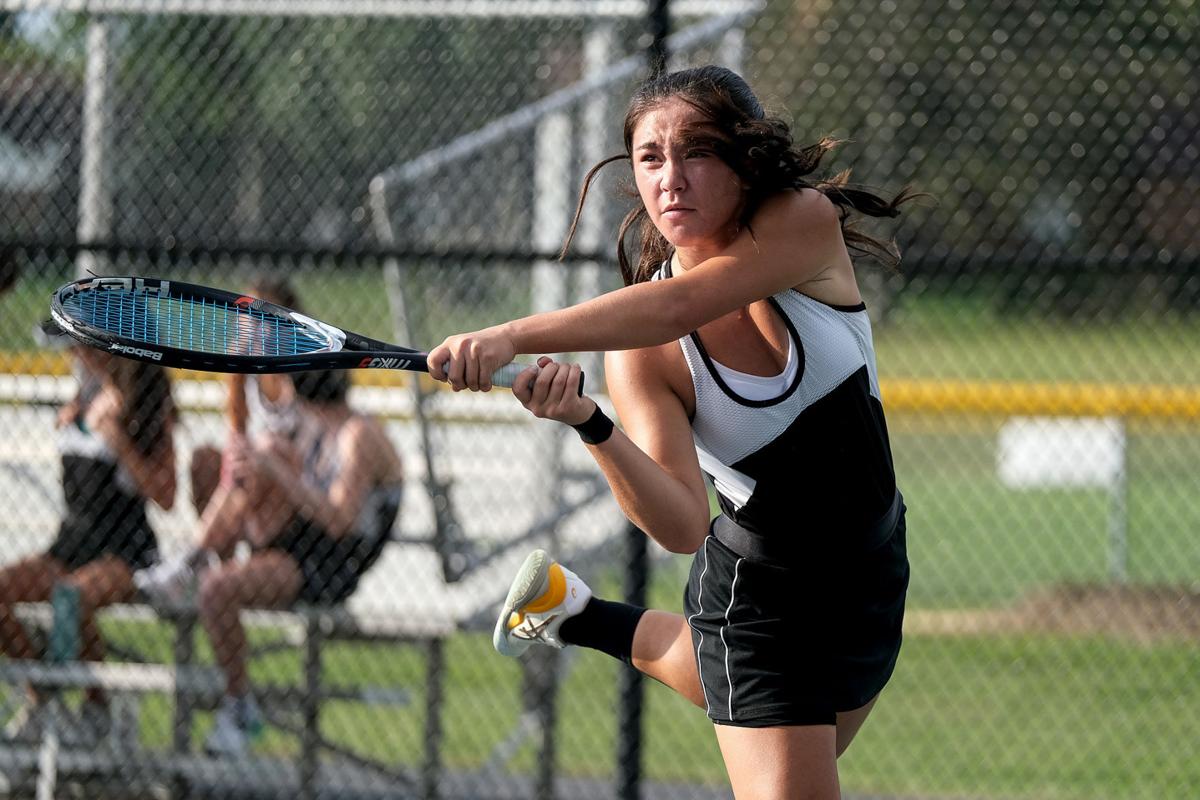 Carbondale’s Skylar Moore hits a return against Marion’s Margaux Bruce during their No. 1 singles match this season in Marion. Moore went on to win 10-1. 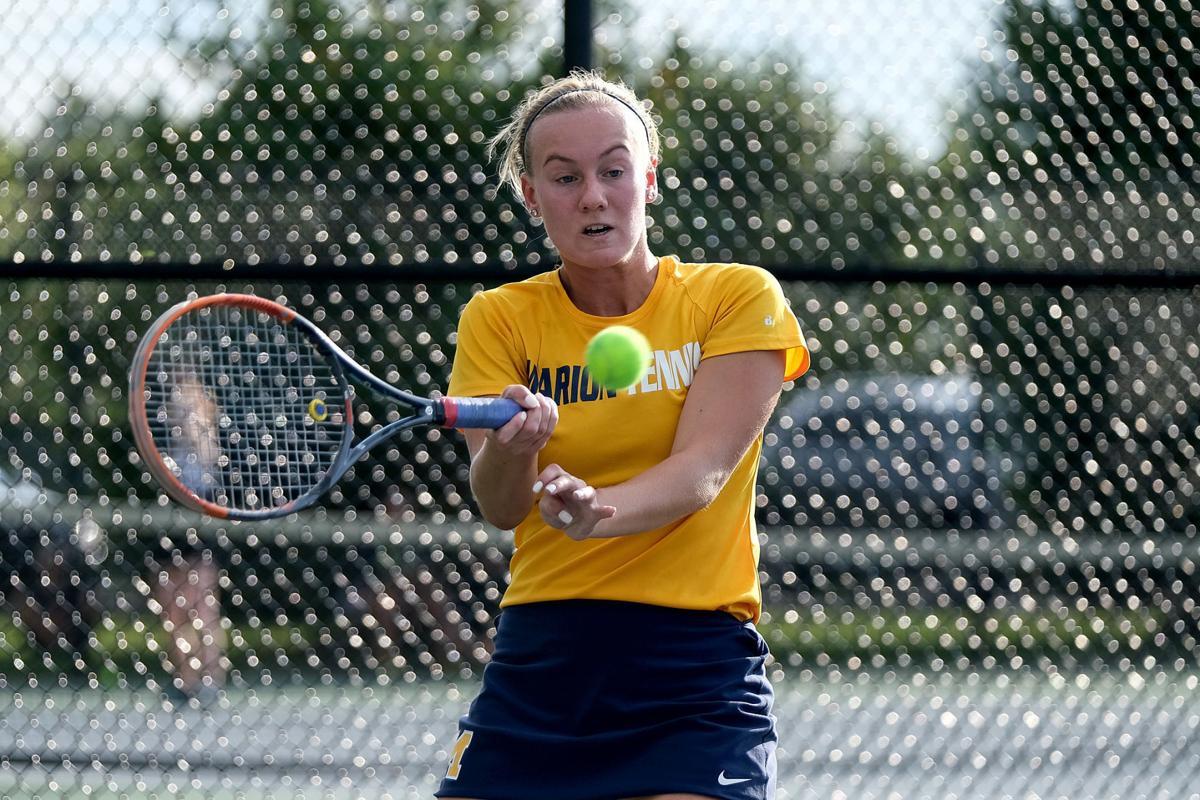 Marion’s Margaux Bruce hits a return against Carbondale’s Skylar Moore during their No. 1 singles match this season in Marion. Moore went on to win 10-1. 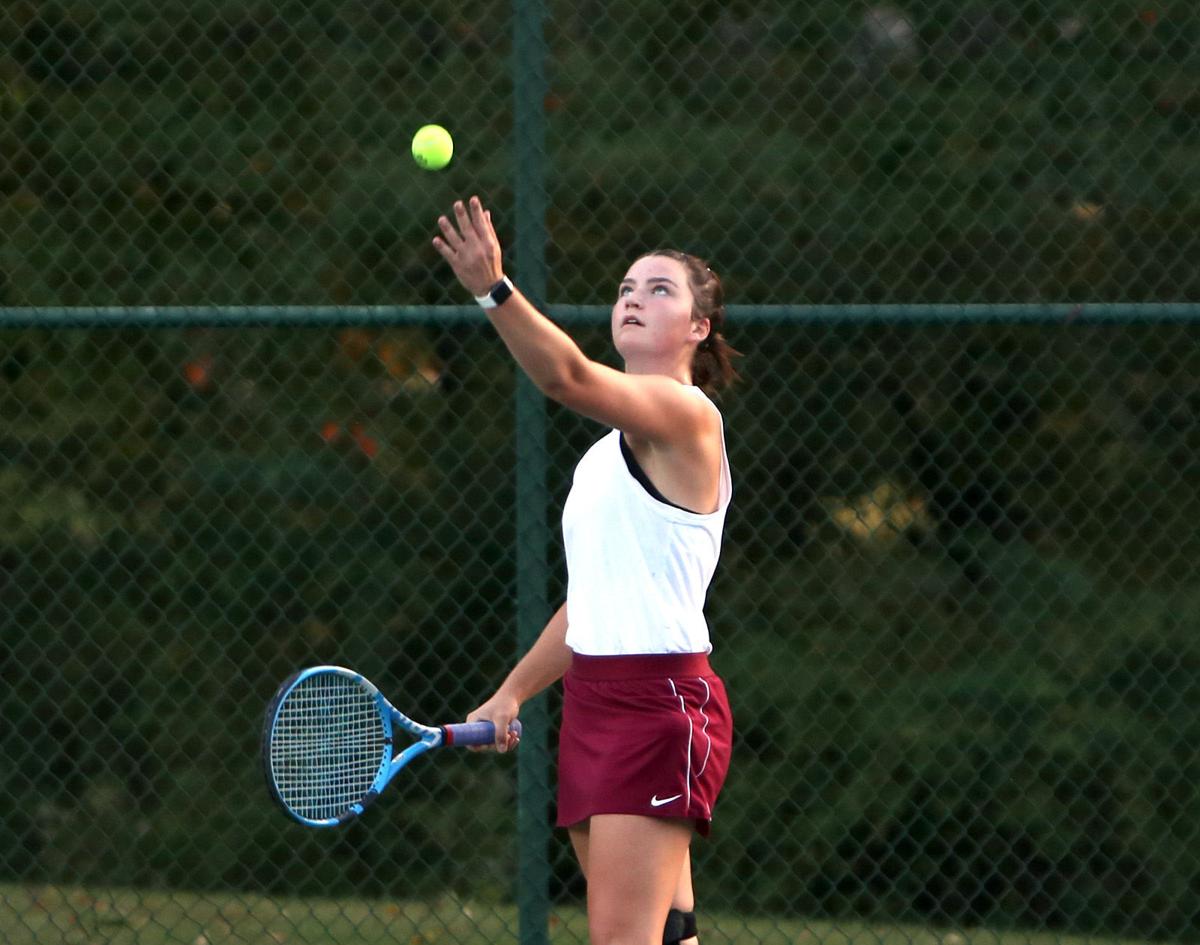 Benton senior Taylor Moore serves the ball in the No. 1 singles during a match between Marion and Benton at the Benton City Park.

CARBONDALE — Three players from sectional champion Carbondale will take their shot at a deep run in the state tennis tournament this week hosted by several high schools in the greater Chicago area.

In singles tournament play, sophomore Skylar Moore (25-4) of Carbondale will take on Amelia Hardimon of Mascoutah (11-7) at Hoffman Estates High School. The winner would likely meet the No. 3 seed, Brooklyn Siegel, of Chicago Wolcott High School.

Only the top 16 players out of a 64-player singles field are seeded. The remaining 48, which includes Moore, have their names drawn randomly when it comes to pairings. It is a double-elimination tournament. Players must win at least two of three matches in order to advance to Friday's second round.

Moore placed first in the singles competition at the Herrin Sectional and also won the meet as a freshman last year, a year in which there was no state tournament.

Others from the region competing in the singles tournament at state include, seniors Margaux Bruce of Marion and Taylor Moore of Benton. Bruce (13-5) will battle Sarah Tunink (19-7) of Sterling Newman Central Catholic High School.

Moore (15-5) will slug it out with Ellie Aitken (18-13) of Sterling High School. Both matches will be played at Vernon Hills High School.

On the doubles side of the tournament, Carbondale's duo of senior captain Jessie Harper and freshman Eislee Moore will square off against Julia Musgrave and Reagan Martyn of Rochester, winners of the Springfield Sectional.

Harper and Moore, the younger sister of singles player Skylar Moore, only began playing together a couple of weeks ago and have compiled a 6-0 record to date, including a 4-0 run at the sectional. The match is scheduled for Palatine High School. If Harper and Moore win their first-round match, they would likely face eighth-seeded Sophia Esquivel and Megan Hackman of Wauconda.

"Both Jessie and Eislee are quiet players, but both have an assassin's mentality," Butler said. "They are skilled players who click very well together. They attack the net well and it helps that one is left-handed (Moore) and the other is right-handed (Harper). That allows them to cover more shots with their forehand."

Harper said she believes that what she and Moore lack in matches played together they make up for with effort.

"I think we pretty much did everything right at the sectional. I wasn't surprised at all that we won it. I knew what Eislee was capable of doing and we worked well together."

Like the elder Moore on the singles side, Harper qualified for state last year in doubles play, but was denied that opportunity to compete due to COVID-19.

"I'm really excited about our chances," Harper said. "We just have to stay positive and improve upon our play this past weekend. If we can do that, I think we can pull out a few wins."

It should be noted that Harper underwent successful shoulder surgery in July and many thought she might not be able to play tennis this fall at all.

"I feel very fortunate," said Harper, who also competed in six singles matches this fall. "The rehab process went well and I was able to play right through it. The shoulder's gotten stronger as the season has progressed."

In other doubles matches involving local players, Madison Kreiner and Adri Tonn (15-3) of Benton will meet up with Ayanna King and Brooke Anderson (5-1) of Chicago's Morgan Park Academy at Buffalo Grove High School.

There wasn’t a state tournament in the winter of 2021 because of COVID-19, but the unofficial state champion in Class 1A came from the South E…

Asked what Tolono Unity’s berth in the state championship game would mean to Jordan Reinhart, LeRoy coach B.J. Zeleznik replied, “Oh man, he would have been ecstatic.”

It was a successful first week of the IHSA football playoffs for local schools. Now comes a different challenge, one mostly fought on the road.

JOHNSTON CITY — Carterville started out slow in both sets, but the Lady Lions rallied Monday night to beat Carmi-White County in straight sets…

JOHNSTON CITY — The Johnston City Indians jumped out to a 22-0 first quarter lead and never let up beating Lawrenceville, 43-12, before an ent…

Carbondale’s Skylar Moore hits a return against Marion’s Margaux Bruce during their No. 1 singles match this season in Marion. Moore went on to win 10-1.

Marion’s Margaux Bruce hits a return against Carbondale’s Skylar Moore during their No. 1 singles match this season in Marion. Moore went on to win 10-1.

Benton senior Taylor Moore serves the ball in the No. 1 singles during a match between Marion and Benton at the Benton City Park.