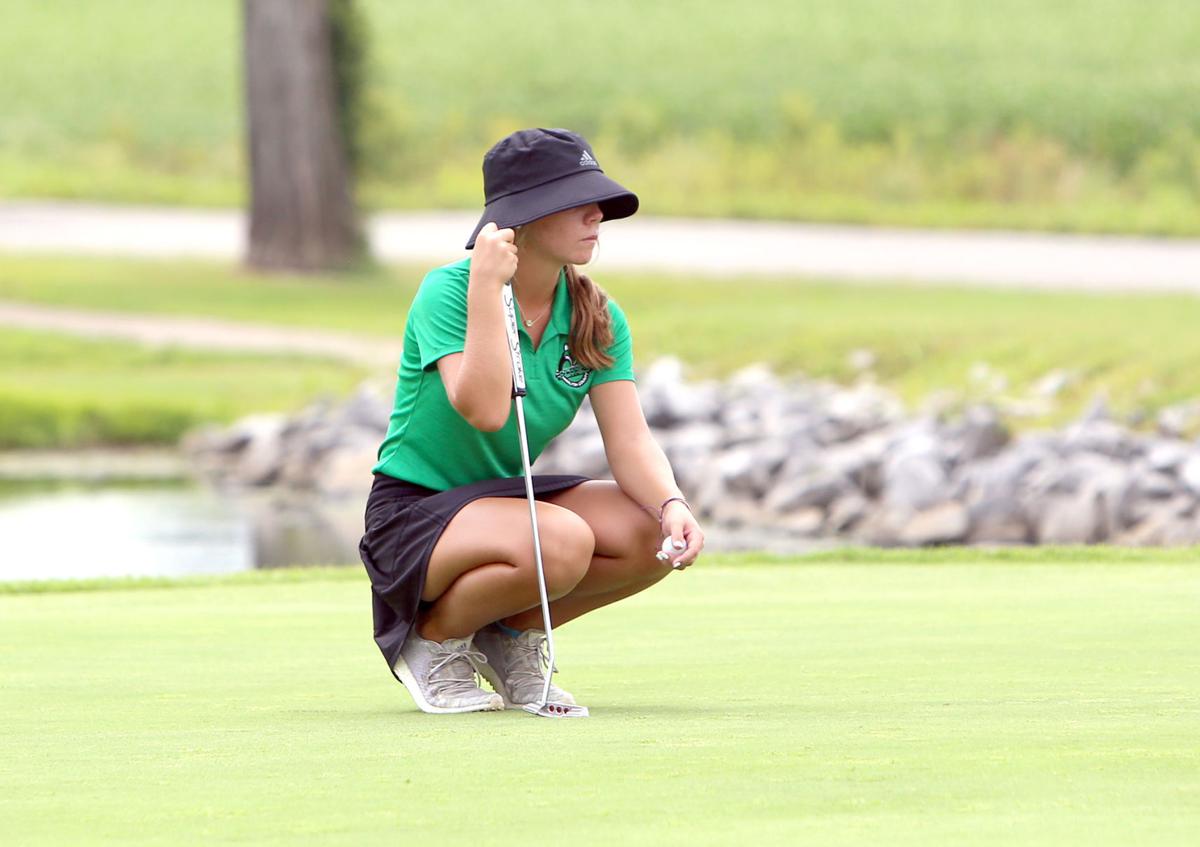 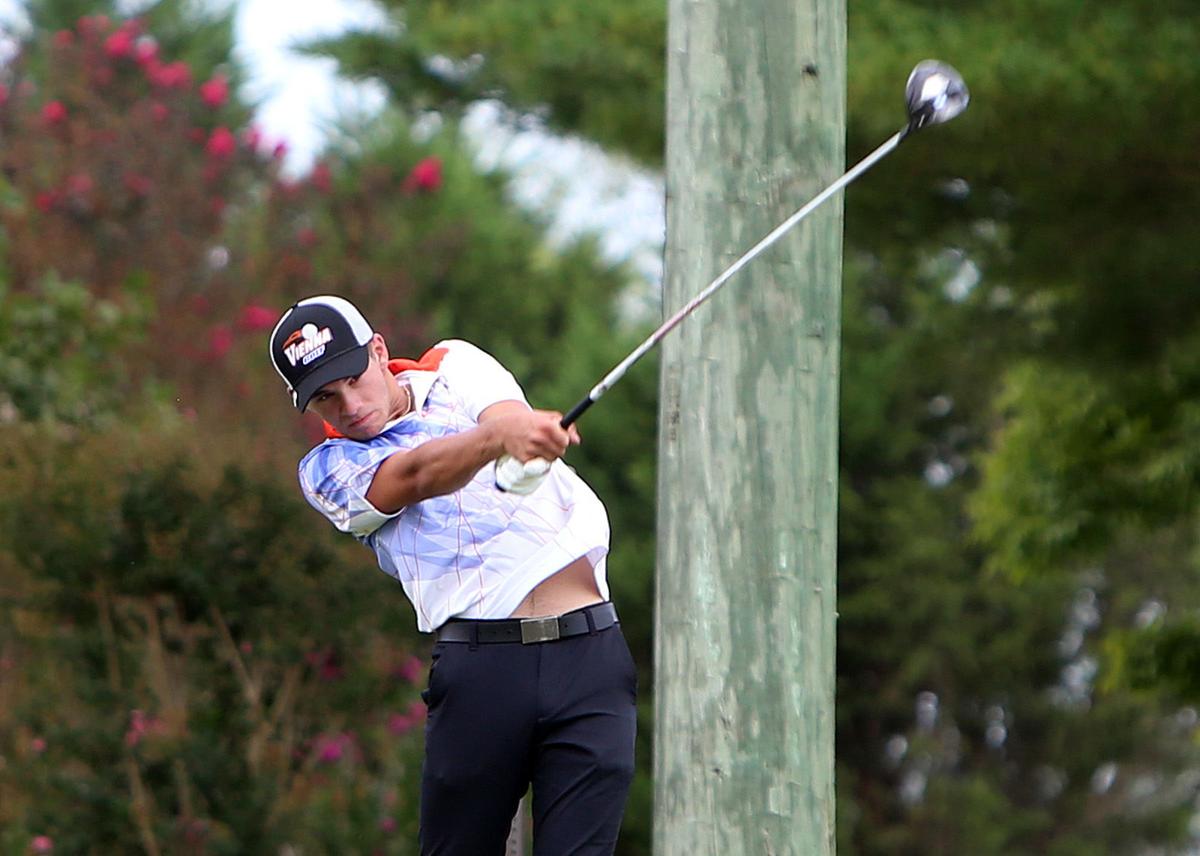 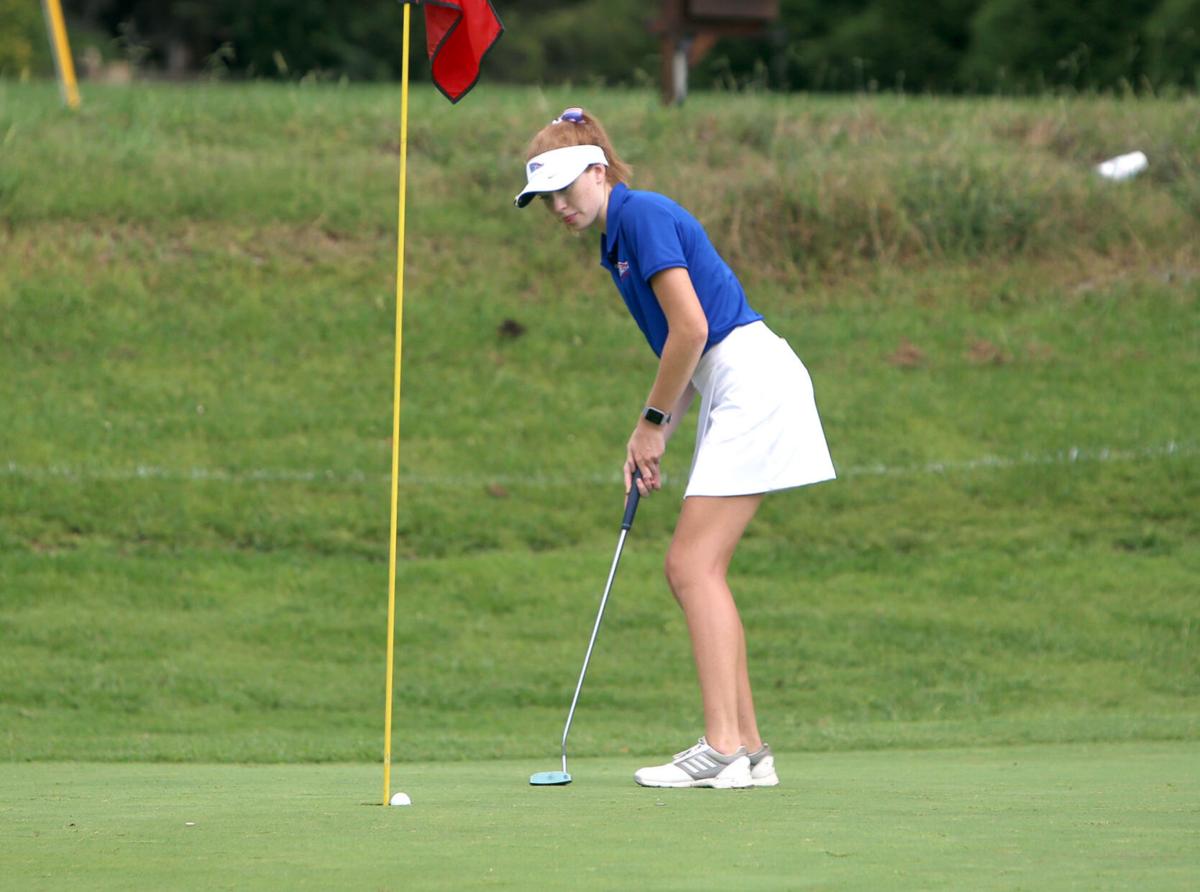 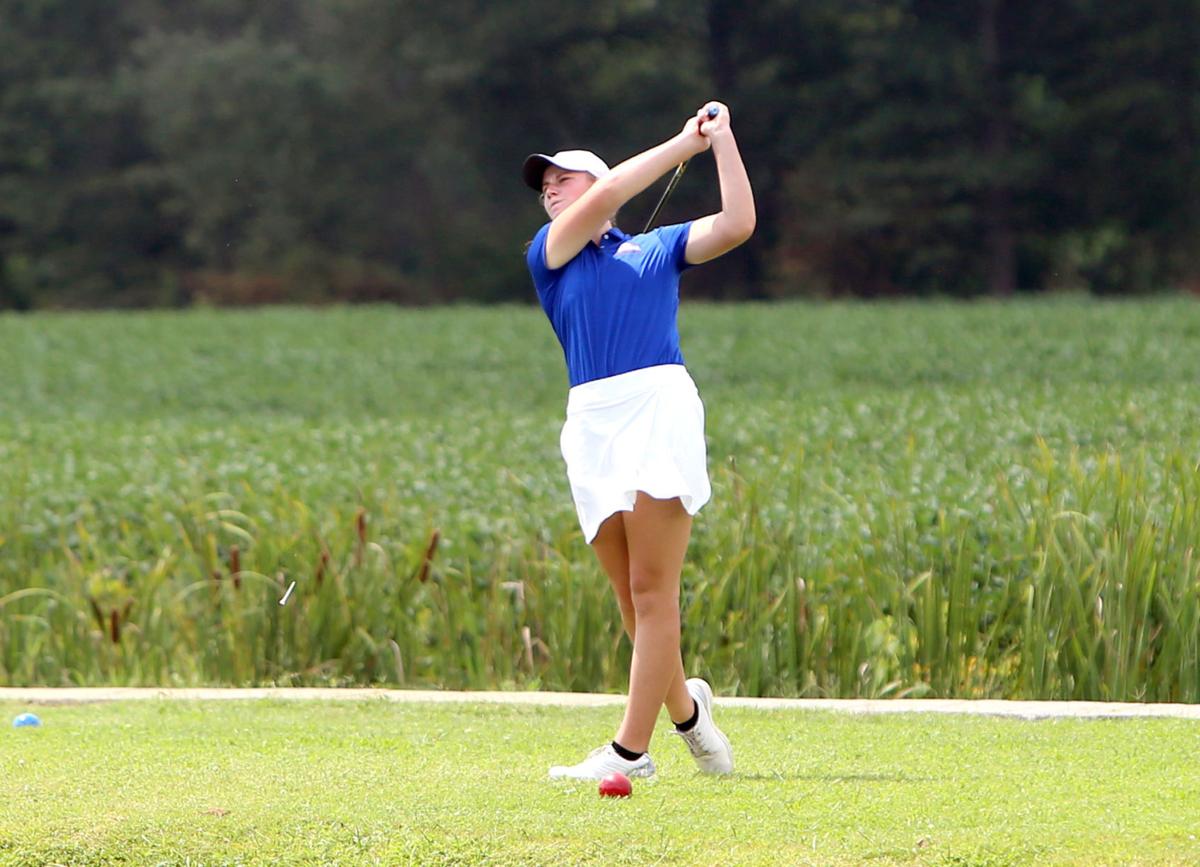 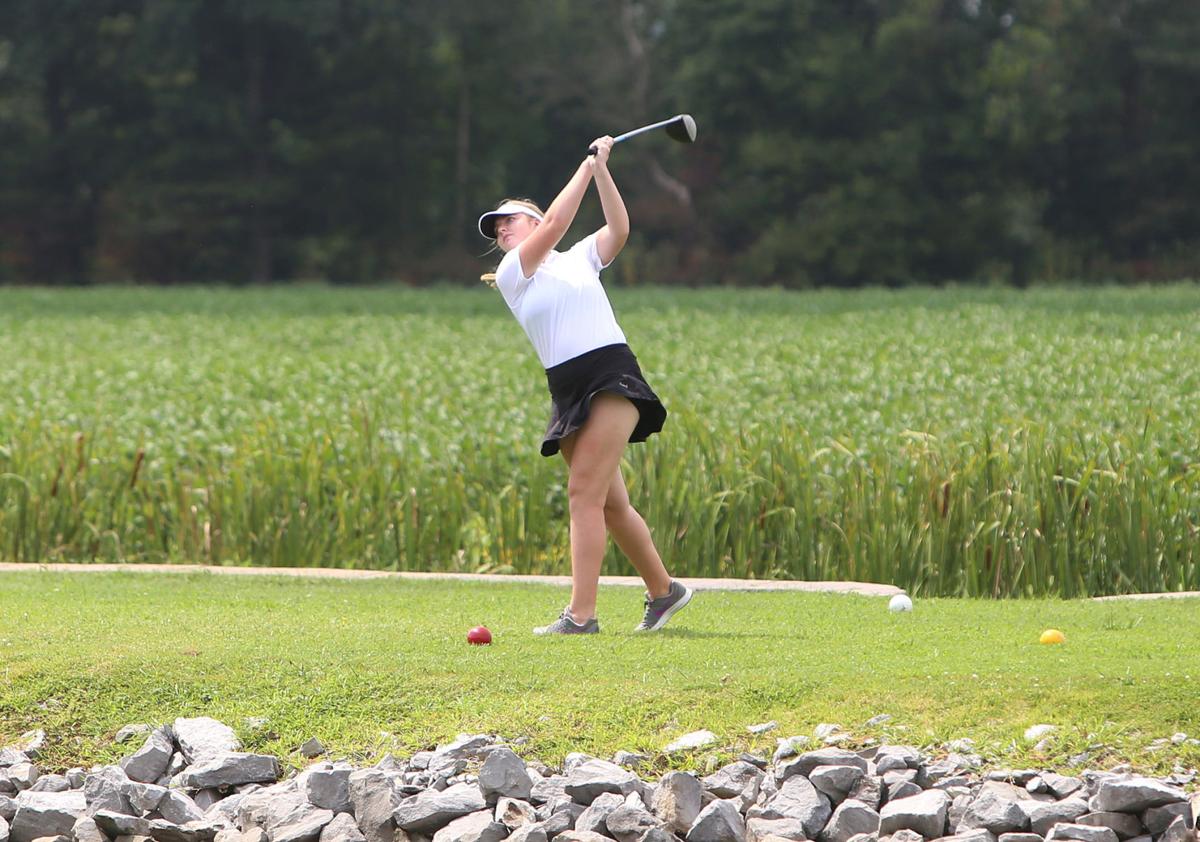 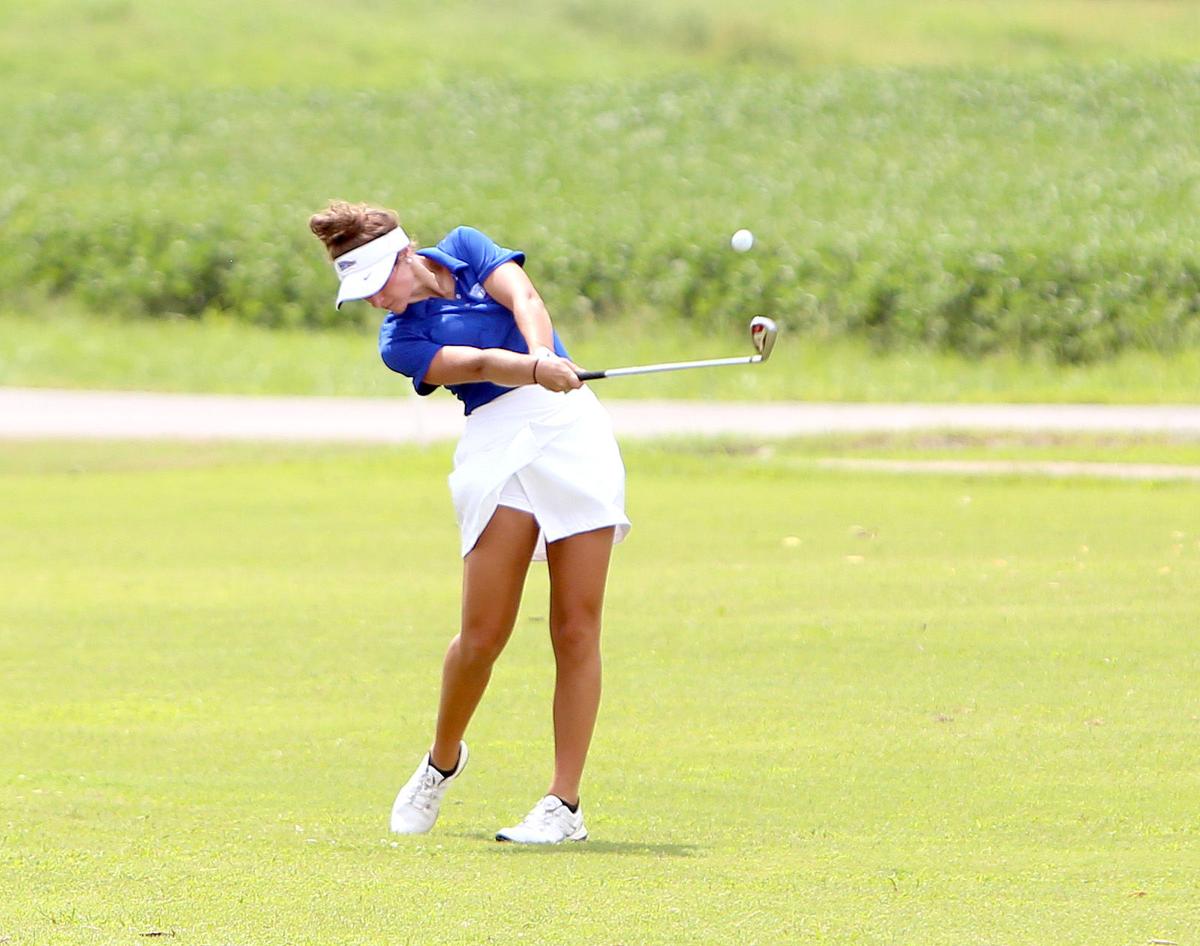 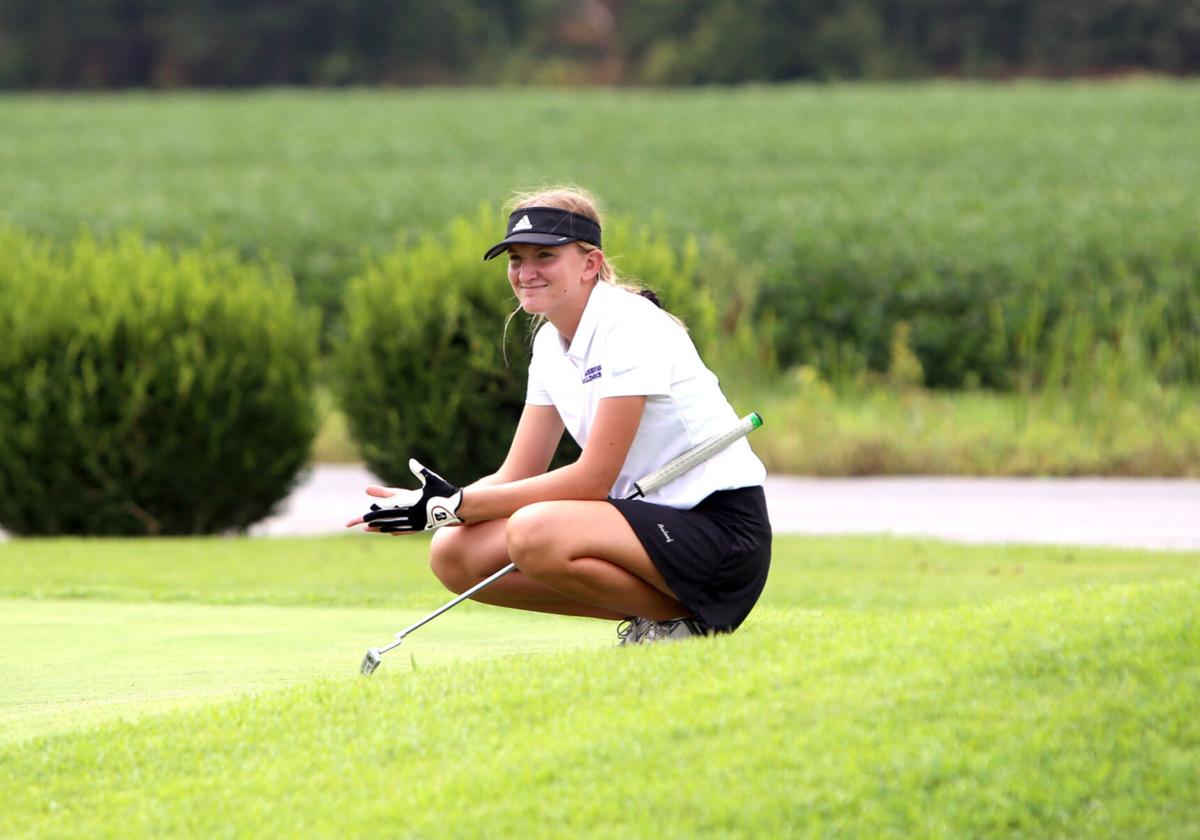 Harrisburg's Madison McCluskey smiles at spectators while waiting to putt during the Massac County Invitational golf tournament on Saturday at Metropolis Country Club. 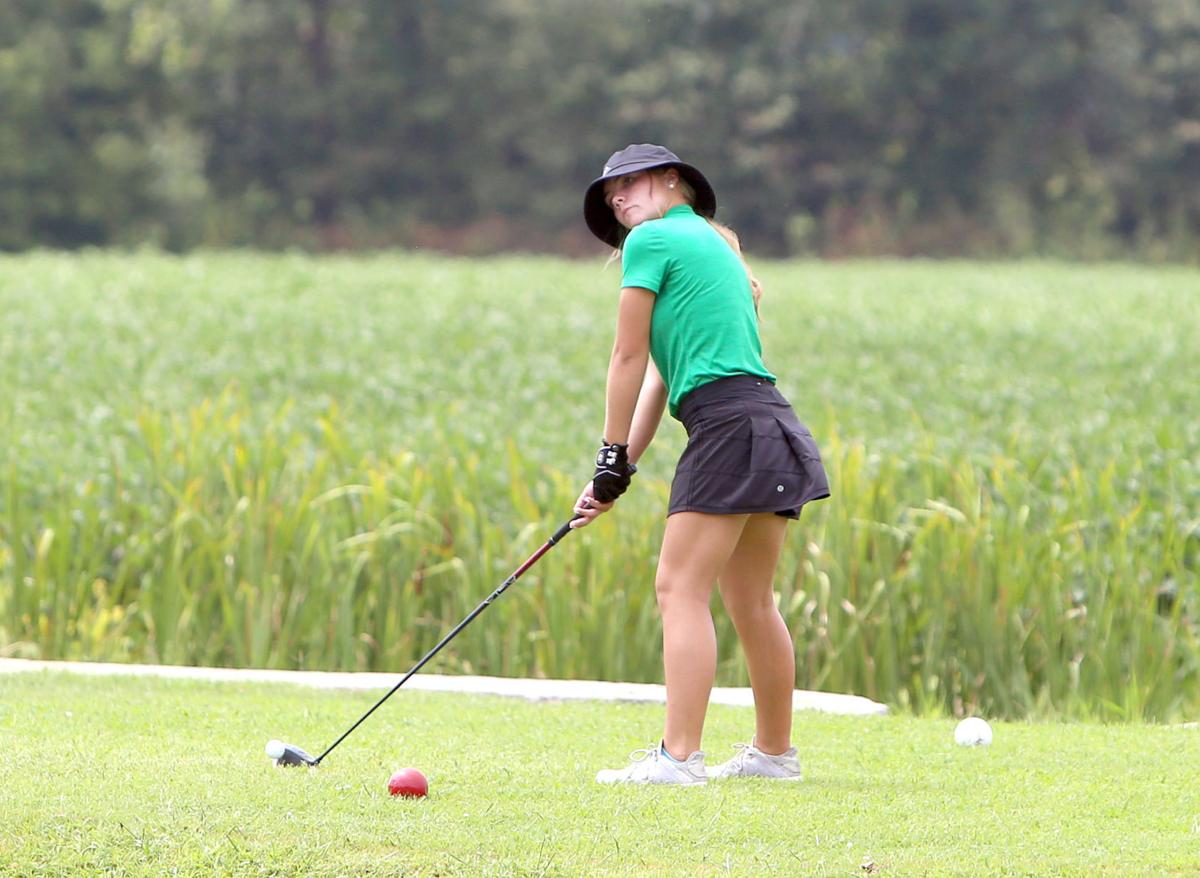 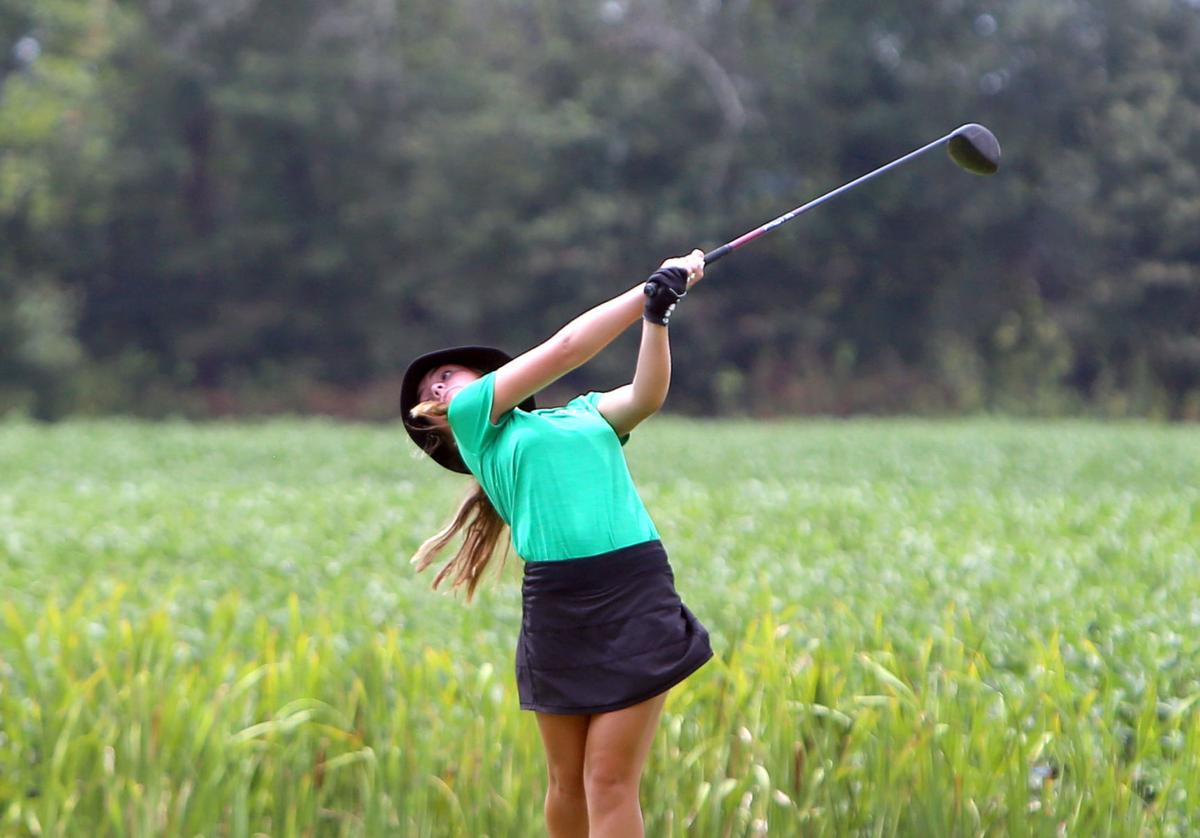 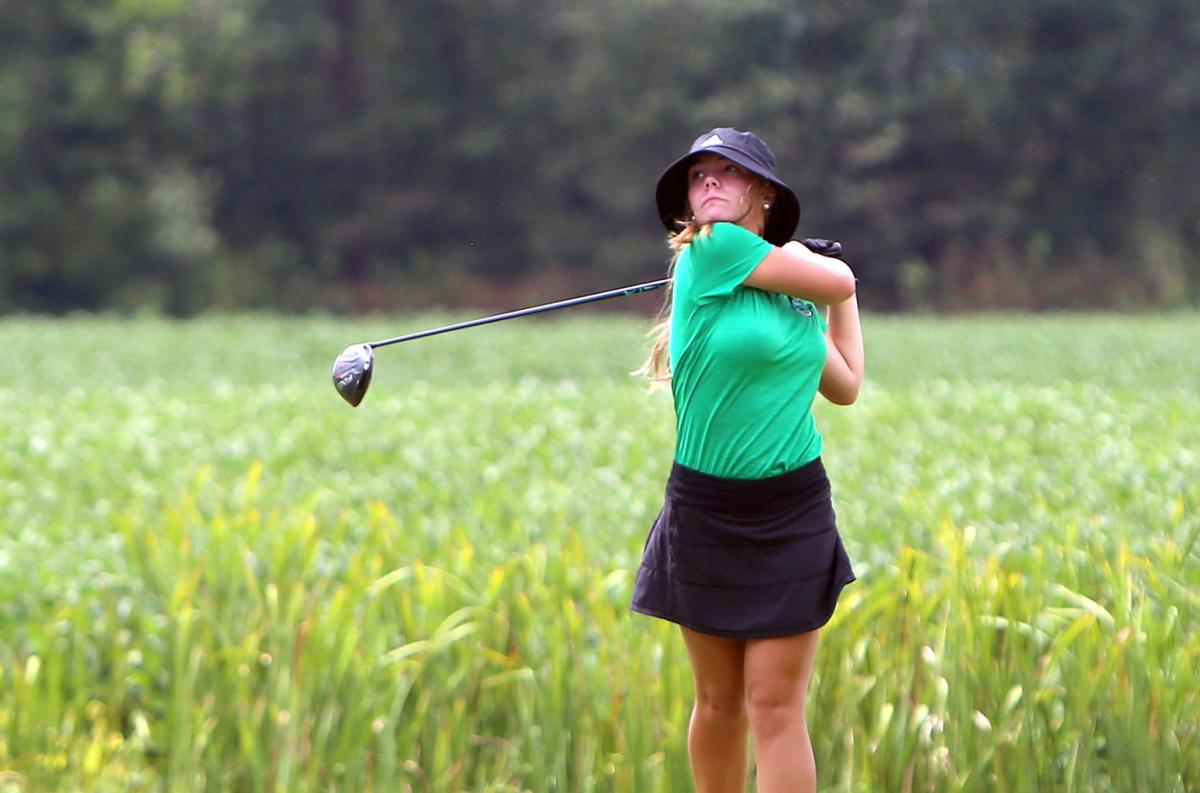 METROPOLIS — One of the marks of a championship golfer is to shoot the round’s low score and still think of what might have been.

That tells the story for both medalists Saturday at the Patriot Invitational, where Hamilton County’s Kylee Vaughan and Benton’s Cy Norman didn’t play at the top of their game but still carded under-par rounds no one else could catch.

Vaughan, a senior who hungers for a Class 1A state title, worked her way around Metropolis Country Club with a 2-under 69. Norman, a sophomore who plays beyond his years, bagged a 70 to help the Rangers cruise to the boys’ team title.

To hear Vaughan and her parents tell the story, a 69 could have easily been a 66. Three times on the back nine, Vaughan left makeable birdie putts begging. That included a 4-footer on 18 after a well-placed third shot on the par 5 closing hole.

“I made putts I had to make, but didn’t make some others I’d like to have back,” she said. “The round was OK, but it wasn’t as good as I was hoping for.”

Vaughan also felt she could have executed some iron shots better, but it’s also hard to quibble with a 69 on a course that wasn’t exactly handing out scores like an old-time PGA Pro-Am in January on the west coast.

“Just like most high school players, it’s all about the short game,” said Foxes assistant coach Barry Vaughan, her father and assistant coach. “She’s had some short putts that she could be making, but hasn’t done it yet.

“She’s really long off the tee, but there are some strokes that can be taken off if she can further improve her putting and chipping.”

Perhaps it was that potential and her past results that drew the interest of SIU’s women’s golf program. Vaughan gave the Salukis a verbal commitment on Friday, becoming the third area player in recent years to pick the Missouri Valley Conference school.

Vaughan also considered Murray State, but the opportunity to play college golf just over an hour from McLeansboro couldn’t be passed up.

“I’m excited to be able to play Division I golf close to home,” she said. “I like the campus and the coaching staff.”

Massac County tapped into its home-course advantage to win the team title with a score of 322. The Patriots don’t appear to have missed any beats under first-year coach Mallory Gentry, having scored a double-digit win earlier in the week over South Seven favorite Marion.

One could make the same statement about Benton’s boys. Although they have just one senior and lost three of its top four players from a sectional champion, the Rangers don’t do rebuilding years.

They simply reload, as shown in a 305 team score that was a whopping 35 shots clear of runnerup Hamilton County. Benton didn’t have to count a round higher than Peyton Sieveking’s 82, which would have made him the low man on four other teams.

Veteran coach Reggie Norman sensed about a month before the season started that the Rangers would be better than some predicted.

“We hear this every year,” he said. “But these kids who are back, they’re eager to prove themselves. They want to show people how much they’ve improved, and so far, they’re doing just that.”

That includes the coach’s son, who’s the team leader with the departure of mainstays like Brad Hammond, last year’s Southern Illinoisan Player of the Year. Cy Norman’s round wasn’t the best of his career, but was four strokes ahead of teammate Nick Melvin.

“Cy knows he can play better, and when he does put it together, it’s going to be fun to watch,” Reggie Norman said.

Massac County survived brutal heat and humidity Wednesday at the Links at Kokopelli to beat their biggest rival this year, Marion, by 19 strokes in the Lady Cat Invitational.

The SIRR Mississippi division was represented at the Benton Invitational by the host Rangers, Massac County and Murphysboro in a 25 player competition at Benton Country Club.

Rain or shine, the weather stood no chance against the patience of four River-to-River schools that went to battle at Crab Orchard Golf Course on Wednesday.

Carbondale’s Annie Shin helped lead the Lady Terriers over Murphysboro and Herrin on Tuesday with a score of 47 to help achieve her fourth-straight medal.

Harrisburg's Madison McCluskey smiles at spectators while waiting to putt during the Massac County Invitational golf tournament on Saturday at Metropolis Country Club.