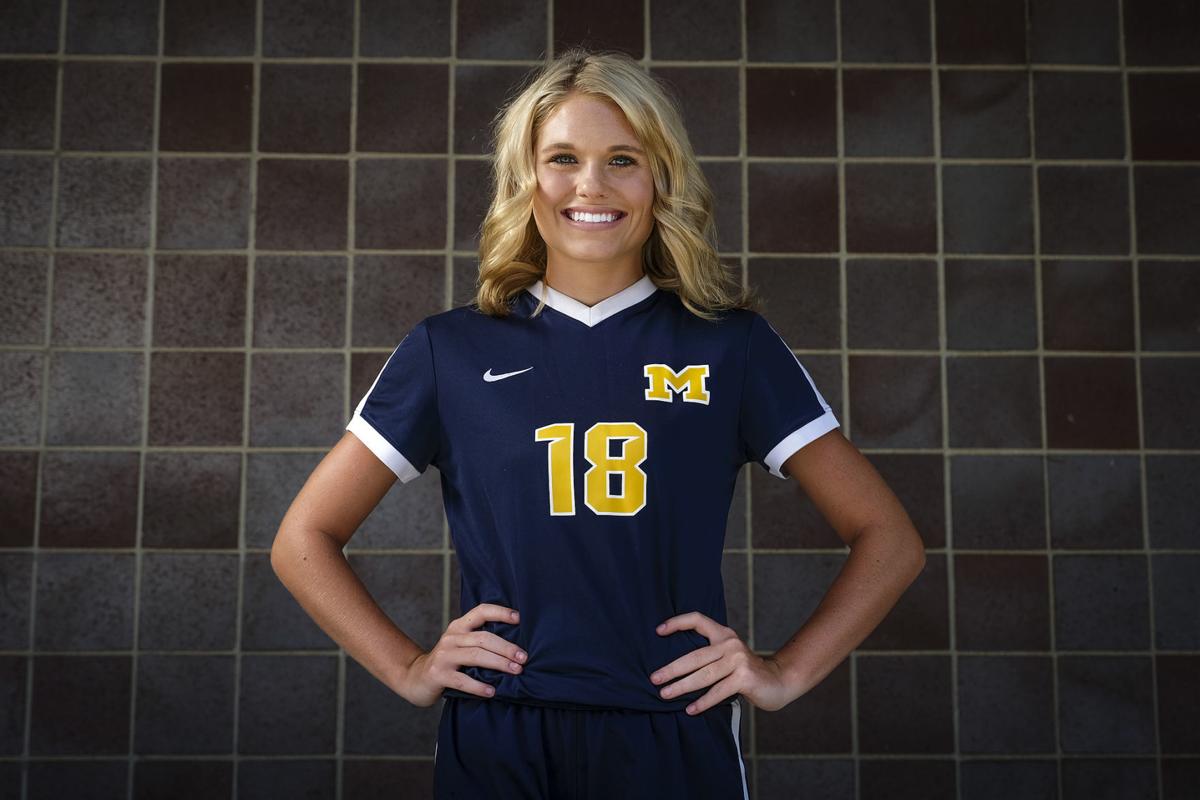 Blake Clark is The Southern Illinoisan Girls Soccer Player of the Year. 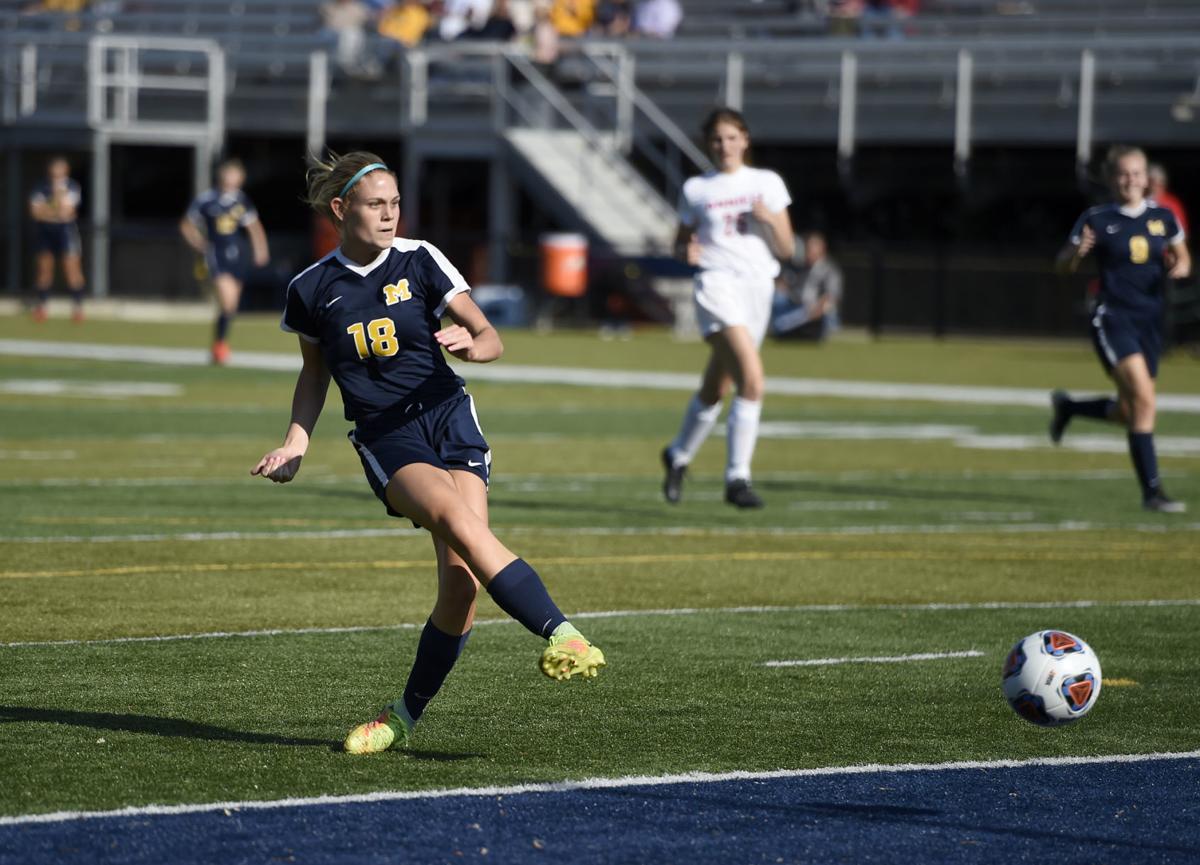 Marion’s Blake Clark (18) shoots and scores against Centralia during the first half of the Class 2A Girls Soccer Regional last month in Marion. 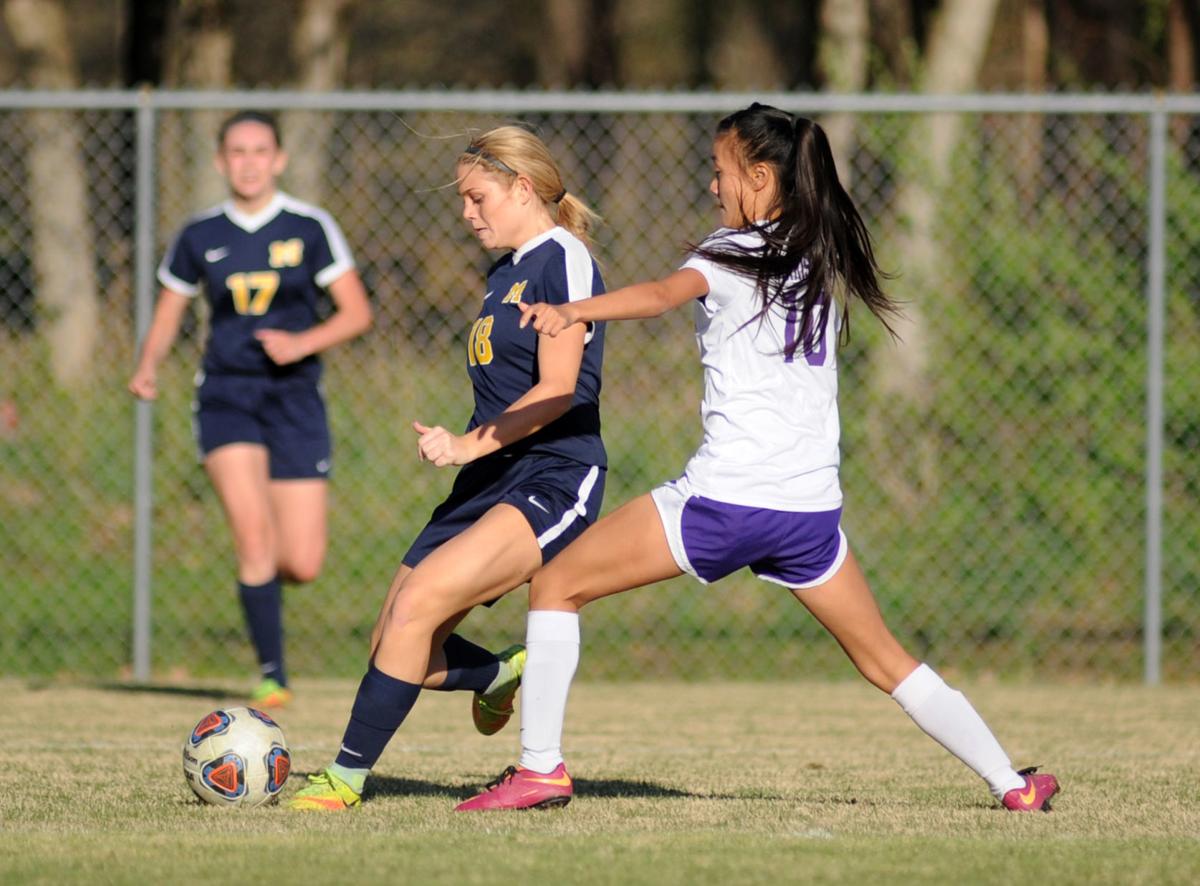 Marion's Blake Clark moves the ball past Harrisburg's Annabella Robinson in the Wildcats' 9-0 win over the Bulldogs in the opening round of the 2019 Fralish Cup in April in Carbondale.

MARION — After a sputtering start to her career, Marion senior Blake Clark capped it off with the best two seasons of any soccer player in the region, boy or girl, scoring 111 goals, including 59 this season, to become the Wildcats all-time leading scorer. And for that she is named The Southern Illinoisan Girls Soccer Player of the Year.

“I started from nothing and worked really hard to get where I’m at now,” Clark said. “It taken a lot of work and dedication to get here, but it’s all worth it. I’m now looking to the next step.”

The yardstick for any girls’ soccer player in Southern Illinois was Marion’s Jessie Crabtree, who from 2005 to 2008 scored more goals than any other player in the region with 142. She ended her career as Illinois’ 11th ranked goal scorer (she has since slipped to 17th). Crabtree went on to play three seasons at the University of Missouri before finishing her collegiate career at Southeast Missouri State.

Clark is the new standard after surpassing Crabtree in career goals scored, with 146 in just three seasons instead of four to put her 13th on the IHSA all-time list. She also shattered Crabtree’s single season team record of 44 goals scored, set in 2006, becoming the first Southern Illinois soccer player to score 50 goals in a season. And she did it twice.

“I started playing soccer in kindergarten,” Clark said. “I actually wasn’t very good when I was younger. In fact in fourth grade I decided I hated soccer and quit for two years and did cheerleading. However with all my friends playing, I tried soccer again in sixth grade and that is when I really fell in love with the game. It was eighth grade when I started getting better because I started putting more work in.”

Clark’s fans will get a chance to see her play this fall when she takes to the pitch to play for the inaugural SIU women’s soccer team. She will join her teammate Marissa Basi, Harrisburg’s Devin Butler and senior Ashley Moore, a former Carbondale Terrier who played for Kaskaskia College.

“My junior year I had decided to go to SIU because they had a dental hygiene program and give up playing soccer,” Clark said. “But then SIU got a soccer team and after the coach saw me play he offered me a scholarship.”

As a freshman Clark played with Crabtree’s younger sister Rose and got off to a great start, scoring a hat trick in her first game en route to 35 goals, which was three more than Crabtree had as a freshman.

“I was a midfielder until Jared Dobbs moved me up top with Rose my freshman year,” Clark said. “Rose helped me a lot, teaching me how to play forward, and that’s when I worked on finishing and got better scoring. Alaina White took me to my first practice and was mentor my freshman year. I was super nervous and very timid because all the girls were bigger than me. Having Rose up there with me helped me a lot. And after the first game things started to click.”

Despite being one of just a few freshmen to score 30 goals or more, Clark didn’t impress the opposing coaches who left her off the South Seven All-Conference team as well as the All-South and All-Sectional teams. Her only award was the Marion Varsity Soccer Newcomer Award.

Clark was sent to the sidelines her sophomore year when it was found out that the family home was over the boundary line between the Marion High School and Crab Orchard High School districts.

“We were unaware that my house was actually 0.2 miles from the line needed to go to Marion, so I was supposed to go to Crab Orchard,” Clark said. “Someone called and reported it to the school and said they had to report it to the IHSA. There was a big discussion what my punishment would be and the decision was sitting out my sophomore year. We then moved into Marion so I could play my junior year. If we hadn’t moved I would have had to pay tuition or go to Crab Orchard. They allowed me to practice and I was the manager, so I still went to every game. I would have loved to have played, but it was just a little setback.”

After her family moved the following summer Clark was good to go to resume her career, and resume she did with a vengeance, with a hat trick in the first game. She then scored a goal in each of the first 15 games which tied her for fourth on the IHSA all-time scoring streak list.

Clark again started the season with a hat trick and ended with 52 goals to become the first Southern Illinois boy or girl soccer player to score 50 goals and only the 20th girl to score 50 goals or more in Illinois history, landing her tied for 17th on that distinguished list. There have been 23 boys to achieve that mark.

This time the opposing coaches took notice, naming her South Seven Offensive Player of the Year and 1st Team All-Conference, in addition to All-Sectional and All-South Soccer Select teams.

Proving that last year was no fluke, Clark hit the ground running this season. While not scoring a hat trick in the first game, she did score two goals at the Metro Cup Tournament in Belleville.

As the season progressed Clark continued to find the back of the net, ending the regular season schedule with 51 goals. She then exploded in the playoffs scoring four goals each in the regional semifinals and finals to enter the sectionals just one goal shy of becoming only the sixth girls player in Illinois history to score 60 goals in a season.

“I had to work a lot harder this year getting the ball because teams were having people on me,” Clark said. “Every time I looked over my shoulder their best defender was there. Once I figured out how to get away from those defenders it opened me a lot more.”

However, she was shut out in the 4-1 loss to Chatham Glenwood in the sectional semifinals, leaving her tied for sixth on the all-time season goal scoring list.

“I had a couple chances, but I’m happy Margaux Bruce scored since she was a freshman,” Clark said. “I was the lone forward last year, so having Margaux up top with me threw back to my freshman year when I had Rose.”

For her career Clark has had hat tricks too numerous to count, around 15 four-goal games, around 10 five-goal games and one or two six goal games.

At the sports banquet Clark was again awarded South Seven Offensive Player of the Year, 1st Team All-Conference and All-Sectional as well as being voted team MVP for the second year.

If you think Clark is just a soccer jock you couldn’t be more wrong. She was an honor student all four years and a member of the National Honor Society, Math Honor Society, the Student Advisory Board, the Student Council and the Future Business Leaders of America.

In addition she volunteers at the Herrin House of Hope, Marion Lighthouse Homeless Shelter, Habitat for Humanity and the Red Cross Blood Drive. She also hosts canned food drives for local food pantries and is a tutor at the Marion Elementary Schools.

The above was only a partial list of how she spends her time. Her plans for her immediate future include entering SIU’s dentistry program and graduating with university honors.

You might wonder when she had time to practice and play soccer, but all she has to say is, “I’m a busy gal.”

Blake Clark is The Southern Illinoisan Girls Soccer Player of the Year.

Marion’s Blake Clark (18) shoots and scores against Centralia during the first half of the Class 2A Girls Soccer Regional last month in Marion.

Marion's Blake Clark moves the ball past Harrisburg's Annabella Robinson in the Wildcats' 9-0 win over the Bulldogs in the opening round of the 2019 Fralish Cup in April in Carbondale.