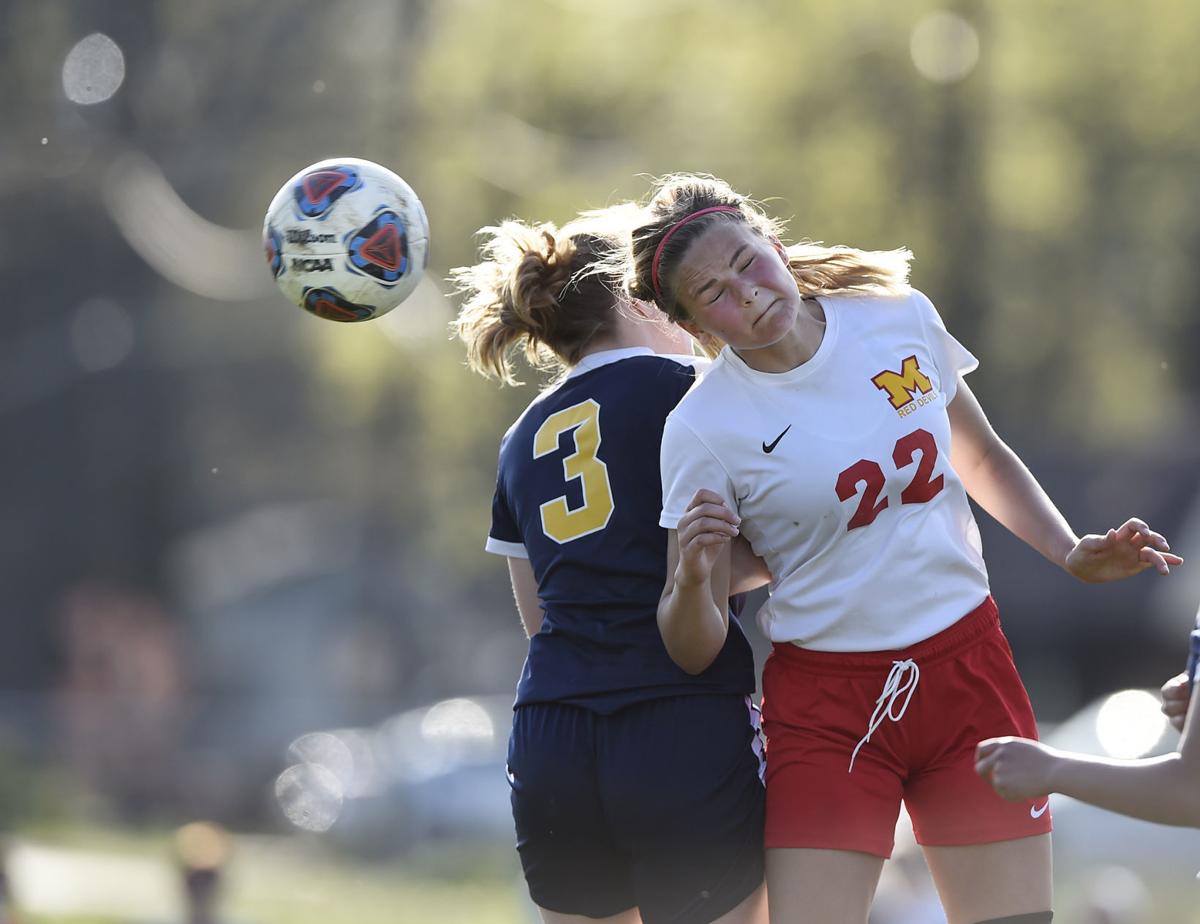 Murphysboro's Lillie Schaldemose (22) heads the ball away from Marion's Haley Rice (3) in the second half in 2018 at Murphysboro. The teams played to a 1-1 draw. 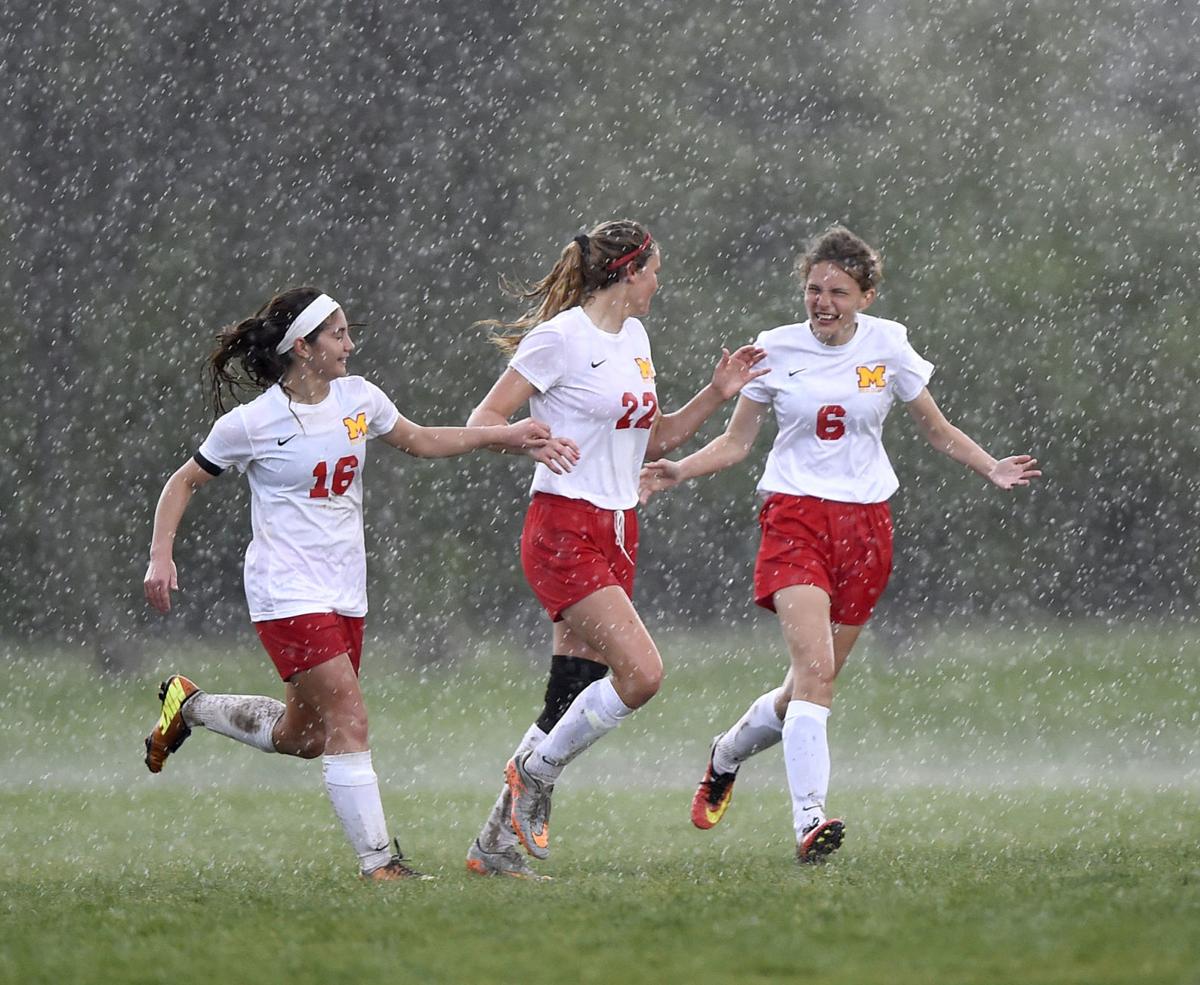 Murphysboro's Arie Ciganovich (16), Lillie Schaldemose (22) and Olivia Schaldemose (6) celebrate after scoring against Highland in the second half in 2018 at Murphysboro. Murphysboro went on to win 3-0.

The coronavirus pandemic has disrupted lives in Southern Illinois and narrowing in on prep girls soccer it was the seniors that saw their final season wiped out never to be replaced that were hurt the most.

On the pitch, which is what the field of play is called in soccer circles, family and fans potentially missed another 50-goal season by Murphysboro’s Lillie Schaldemose, another record-breaking season by the girls from Marion and Carterville/Herrin as well the inaugural varsity season for the Pinckneyville Lady Panthers.

In addition, it would have been the first time soccer was officially recognized as a championship sport in the Southern Illinois River-to-River Conference with seven schools (Anna-Jonesboro, Carterville, Harrisburg, Herrin, Massac County, Murphysboro and Pinckneyville), sponsoring soccer programs.

The saddest aspect of the “lost” season was for the 54 seniors on 10 local teams who didn’t get to complete their high school sports experience. Marion and Mount Vernon were the most senior laden teams with 10 each while on the low end of the scale Harrisburg and Massac County had only two each.

Schaldemose, who came into the season with a team record 105 goals, missed a chance to become the highest scoring player either female or male in Southern Illinois history and move into the Top 5 in goals scored in a season and Top 10 in career goals scored.

“Lillie is special,” said Murphysboro coach Michael Lydy. “If we got to play all our games, which is never a given in the spring, she had a good chance to at least repeat last year and maybe score 60 goals.”

Schaldemose was coming off a career season, scoring 51 goals to become only the second female or male Southern Illinois player to score 50 or more goals joining former Marion star Blake Clark, who did it twice becoming the first to achieve that feat with 52 goals in 2018 and followed with 59 goals in 2019.

“She has a natural talent to score and should be very successful at the next level,” Lydy said.

Clark is the local all-time leader in career goals scored with 146 surpassing the previous record of 142 goals held by Marion’s Jessie Crabtree (2005-08). Schaldemose would have needed only 42 goals to surpass Clark’s mark, which was well within the realm of possibility. This fall, Schaldemose and Clark will become teammates when Schaldemose joins the SIU-Carbondale women’s soccer program.

“We had 10 players back with playing experience and after losing just two starters (Schaldemose and Ashley Jarrett) from this team I think we will have a lot of talent coming back again and I’m hope we can play next year,” Lydy said.

Marion has been on the rise since Jaime Clark Verbeck took over the program four years ago. Starting with a 14-8-0 record the Wildcats tied the school record for wins with a 17-5-3 record two years ago while winning its first regional title since 2015.

“I thought this could have been the year we crossed the bridge from being very good to great,” Verbeck said. “Not only did we have 10 great seniors in terms of both leadership and ability, but we had underclassmen that could fill out the depth chart, so we had a lot of depth. I think they could have done some pretty amazing things.”

With 10 seniors, the Wildcats were poised to make a deep playoff run.

“Our senior class in the three years they got to play averaged the previous school record in wins,” Verbeck said. “I think we would have an opportunity to break the 20 wins record this year with this group. It’s pretty disappointing for them to lose their senior year in terms of the opportunities to break other records. But I will say this group has such strong character I think they will do great things in life.”

The Pinckneyville Lady Panthers were to begin varsity play for the first time in its three-year history after playing junior varsity for the past two seasons.

“Our first game was going to be on St. Patty’s Day (March 17) and I got the girls green shirts to wear that day and they were all excited,” said Pinckneyville coach Jay Ray. “Those two weeks before we got shut down, we pushed them hard and they were ready. I let them keep the shirts.”

Last year led by center defensive back Macy Epplin, center midfielder Olivia Buza and center forward Dakota Krone, Pinckneyville finished over .500 for the first time with an 8-4-1 record. Ray refers to his players by a nickname and the seniors go by Department Store (Epplin), Bubble Gum (Buza) and Lightning (Krone).

“They were excited after coming off a great JV season last year and their goal this year was to win the regional and they thought they could do it, because we had everybody coming back,” Ray said.

Sadly the three seniors couldn’t complete the job and will have to hand the team over to a new set of leaders when the Lady Panthers make their delayed varsity debut next year.

“The seniors worked so hard and I feel bad for them,” Ray said. “Lightning and Department Store had played for me since they were eight years old. One bad thing is Bubble Gum had a lot of college coaches interested in her. For me, I will miss the camaraderie and the fun of coaching these girls. They were a good group to be around and those three seniors will be missed.”

Another team that was poised to make a big leap this year was the Carterville/Herrin Coop Lady Lions after finishing above .500 (8-7-2) and winning a playoff game for the first time in its six year history.

“This for me was a season for us to really start to put in some competitive effort against Carbondale, Marion and Murphysboro,” said Carterville/Herrin coach Chip Lennox. “With the upper class both the juniors and seniors and quite a few sophomores, who were big contributors as freshmen, coming back this would have been the year to really start stepping up and putting in a good competitive fight against the established programs like the boys did last fall.”

Lennox lost only one full-time starter from last year’s team and had three senior starters back this spring in Ashton Hawk, Olivia Cripps and Maddie Olson along with fellow seniors Julia Stroud and Rose Mercader. He also would have had six juniors, four sophomores and 10 talented freshmen to make a run at their first regional title.

“Losing the season sets everybody’s program back, but it really hurts the teams with a lot of seniors,” Lennox said. “The great lament this year is the seniors not playing their final season.”

Murphysboro's Lillie Schaldemose (22) heads the ball away from Marion's Haley Rice (3) in the second half in 2018 at Murphysboro. The teams played to a 1-1 draw.

Murphysboro's Arie Ciganovich (16), Lillie Schaldemose (22) and Olivia Schaldemose (6) celebrate after scoring against Highland in the second half in 2018 at Murphysboro. Murphysboro went on to win 3-0.