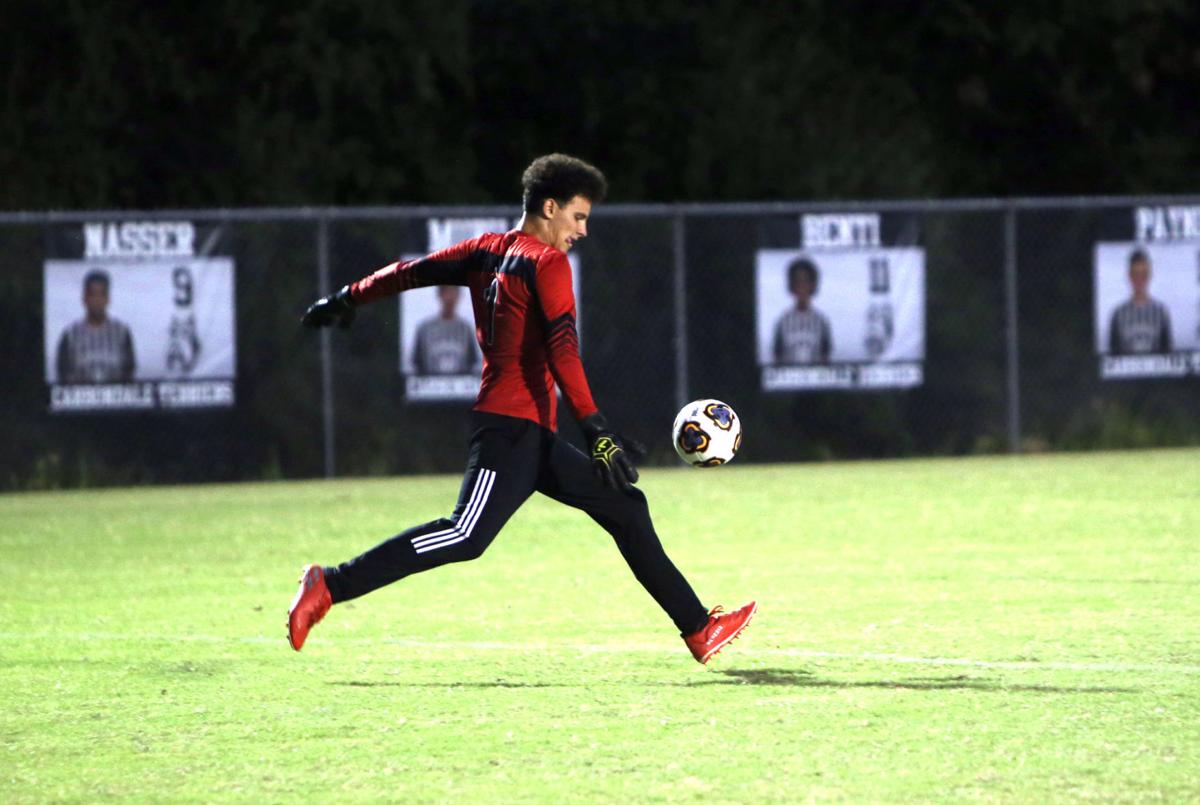 Carbondale goal keeper Nathaniel Pimentel kicks the ball away during Thursday's match against Marion at the Fralish Soccer Complex. 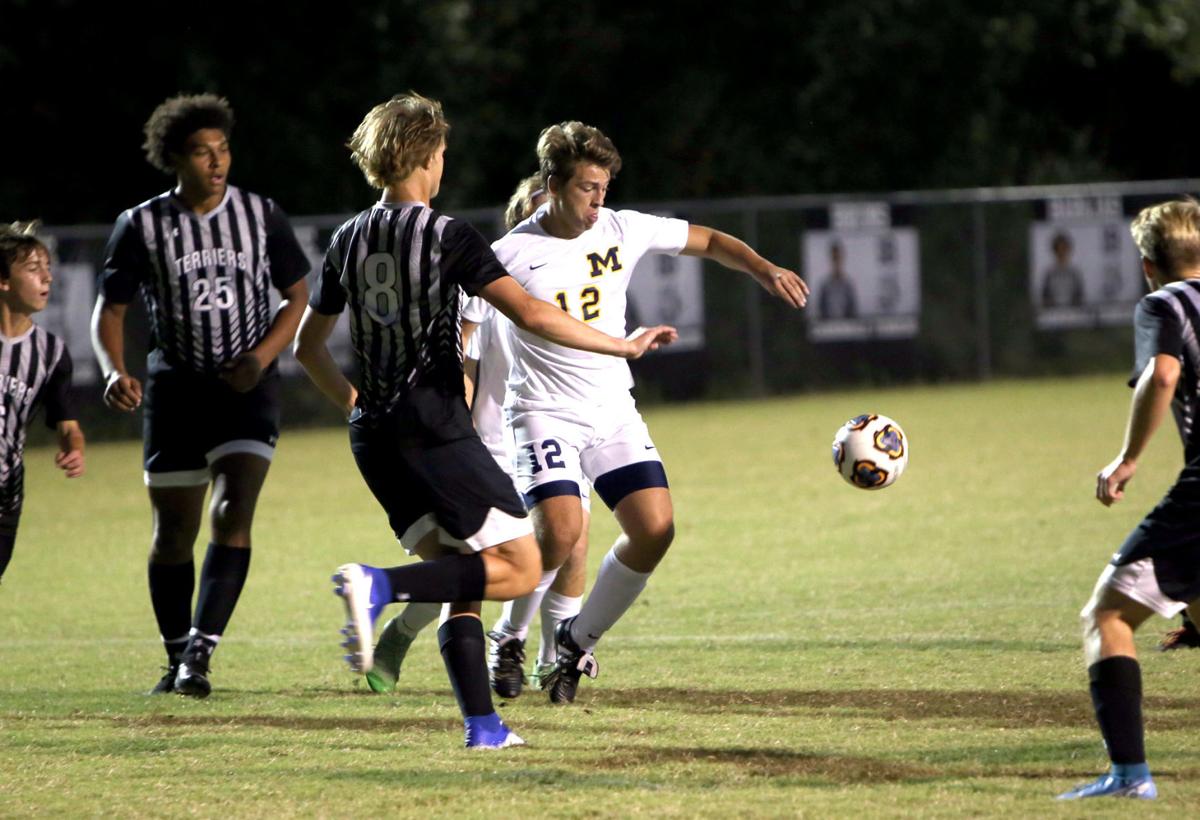 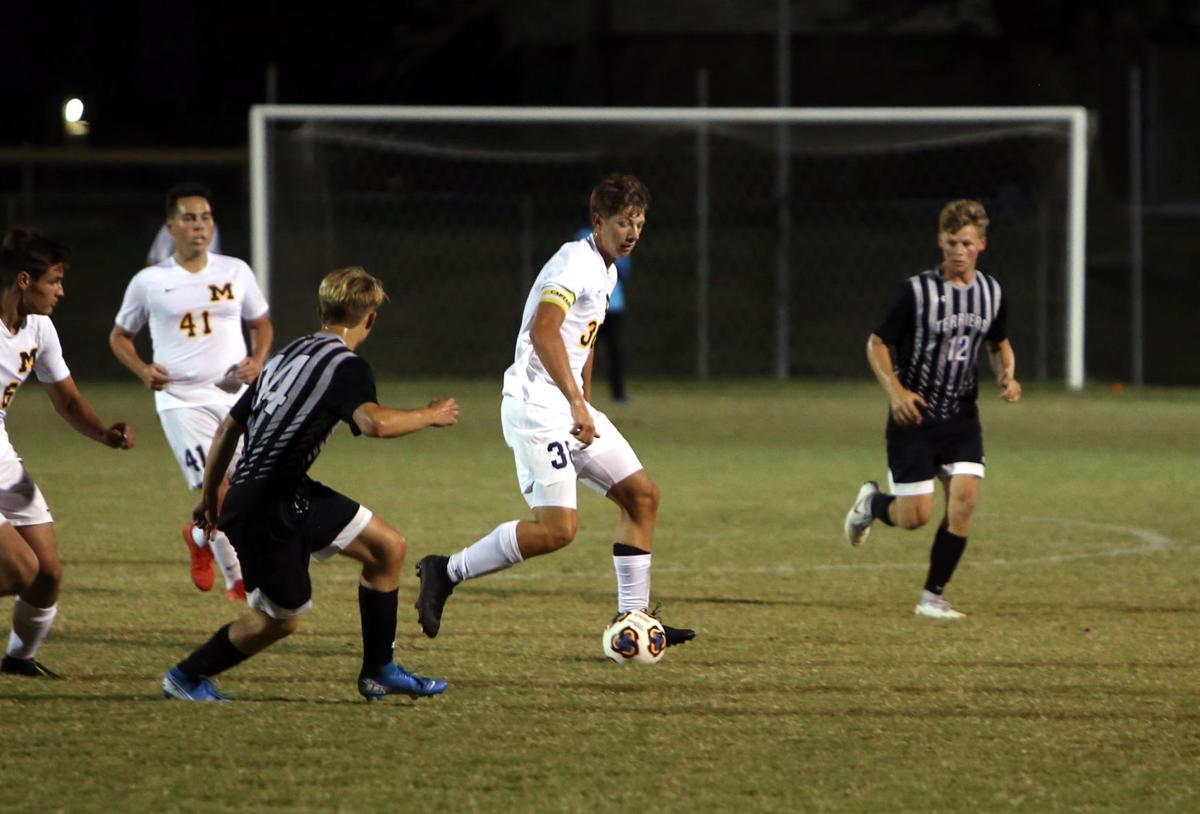 Marion's Braden Dalton works the ball during Thursday's match against Carbondale at the Fralish Soccer Complex. 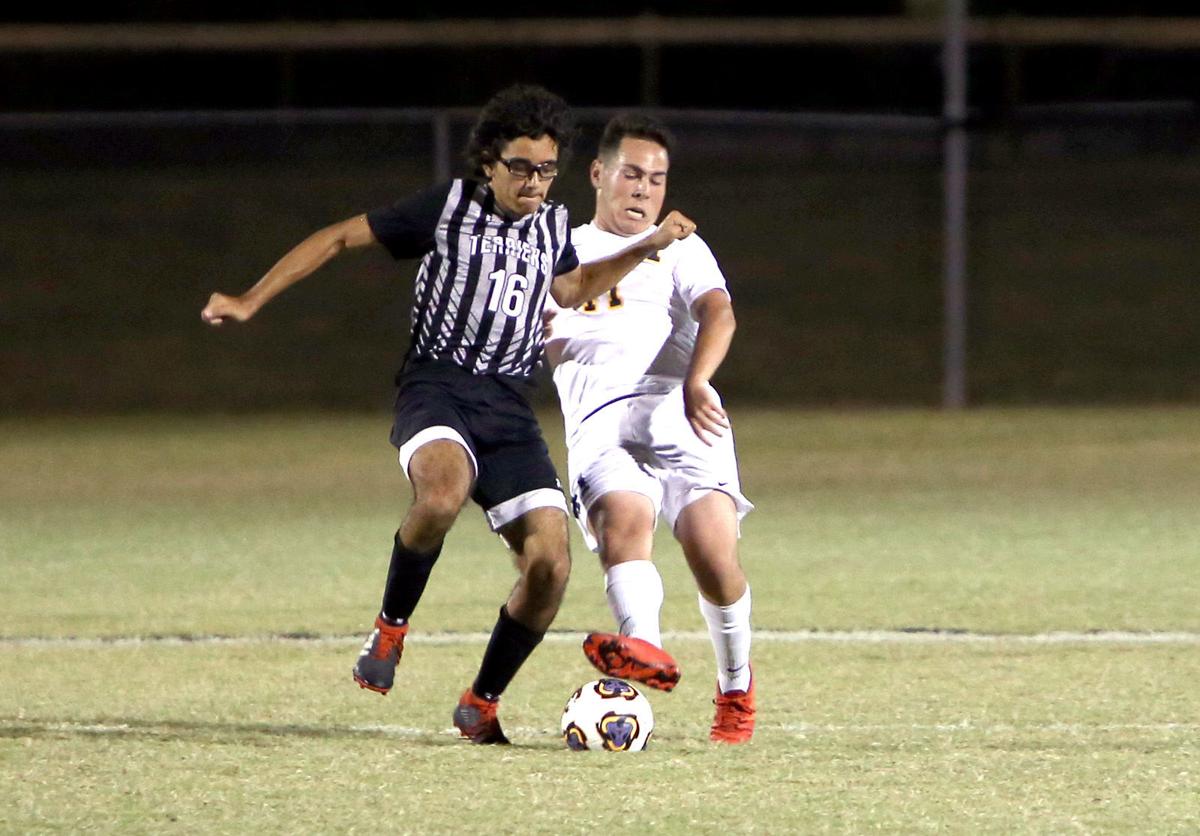 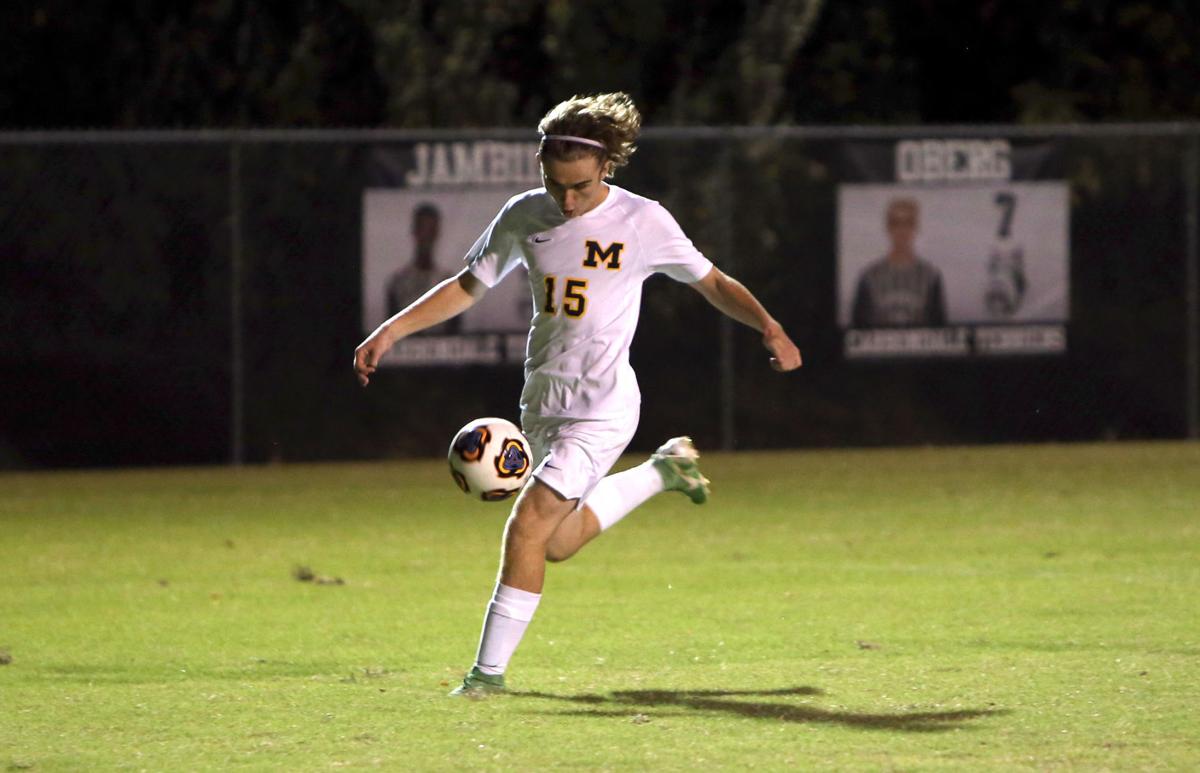 Marion's Chase Banks takes a shot that is saved by Carbondale goal keeper Nathaniel Pimentel during Thursday's match at the Fralish Soccer Complex. 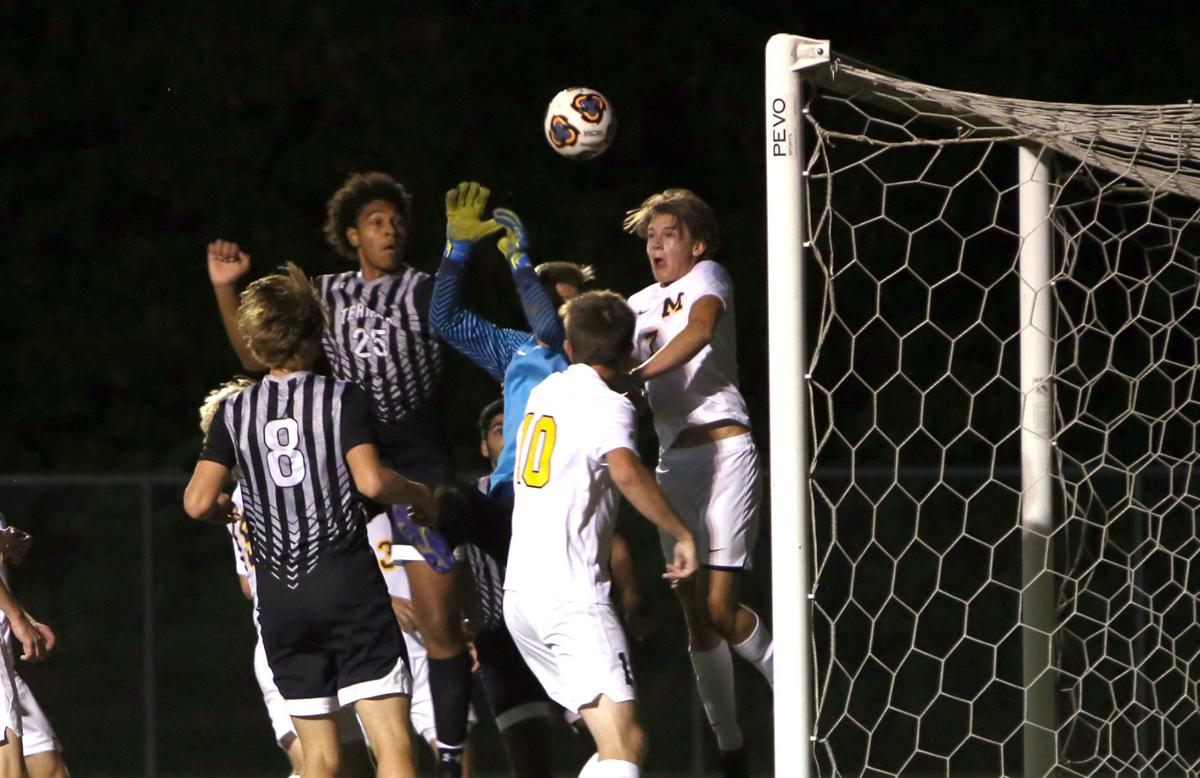 CARBONDALE — Behind two goals each from Ibsaa Benti and Josh Payne and a solid defense, Carbondale beat Marion 7-1 to remain undefeated on the season and the South Seven Conference in a boys soccer match at the Fralish Soccer Complex.

“We’ve been talking about undefeated, but with our schedule its tough,” said Carbondale coach Jeff Hansen. “The only team to run the regular season was 2004 under Greg Kline. So we’ve talked about that group and had discussions with players from that group. They think about it, but we really take it just one game at a time.”

Carbondale coming off a 1-1 tie with Anna-Jonesboro improved to 13-0-2 overall and 4-0 in the conference while Marion coming off a 2-2 tie with Massac County and a 2-0 win over Centralia dropped to 3-6-3 and 2-2 in the South Seven.

“They are a good team,” said Marion coach Rob Underwood. “They are loaded top to bottom and we’re a bit banged up. But we play them again it might be a different score on our field.”

Four minutes and 26 seconds later Payne scored his first goal off an assist by James Oberg.

“Their goal was kind of a wake-up call that we needed to put it in gear,” Payne said. “James just played the ball across the top. It wasn’t a great shot on my part, but it went in.”

Carbondale increased its lead when Sajad Nasser set up Ian Davis for his fourth goal of the year 2:09 later off a quick set indirect free kick.

“It was such a smart play to set it real quick,” Hansen said. “They had intentionally played it back to their keeper and he picked it up setting up an indirect free kick. Nasser was smart enough to set it and play it over to Ian and finish it before they had reset.”

It took just another minute and 29 seconds for Nasser to score his 18th goal of the season off a free kick with 8:51 remaining in the first half. Thirty-five seconds later Davis scored again on a header, but the goal was called back on an offsides and the score remained 4-1 at halftime.

The Terriers scored three goals in the first 15 minutes of the season half to put the game away. Oberg and Payne teamed up again with Payne scoring his second goal of the game and third for the season at the 4:14 mark.

Three minutes later Jacob Collie scored his third goal of the season off a corner kick from Payne for his 14th assist of the season. Benti scored his second goal and 11th of the season with 25:24 left in the game after picking up a deflected shot by Oscar Murillo.

Carbondale goal keeper Nathaniel Pimentel kicks the ball away during Thursday's match against Marion at the Fralish Soccer Complex.

Marion's Braden Dalton works the ball during Thursday's match against Carbondale at the Fralish Soccer Complex.

Marion's Chase Banks takes a shot that is saved by Carbondale goal keeper Nathaniel Pimentel during Thursday's match at the Fralish Soccer Complex.