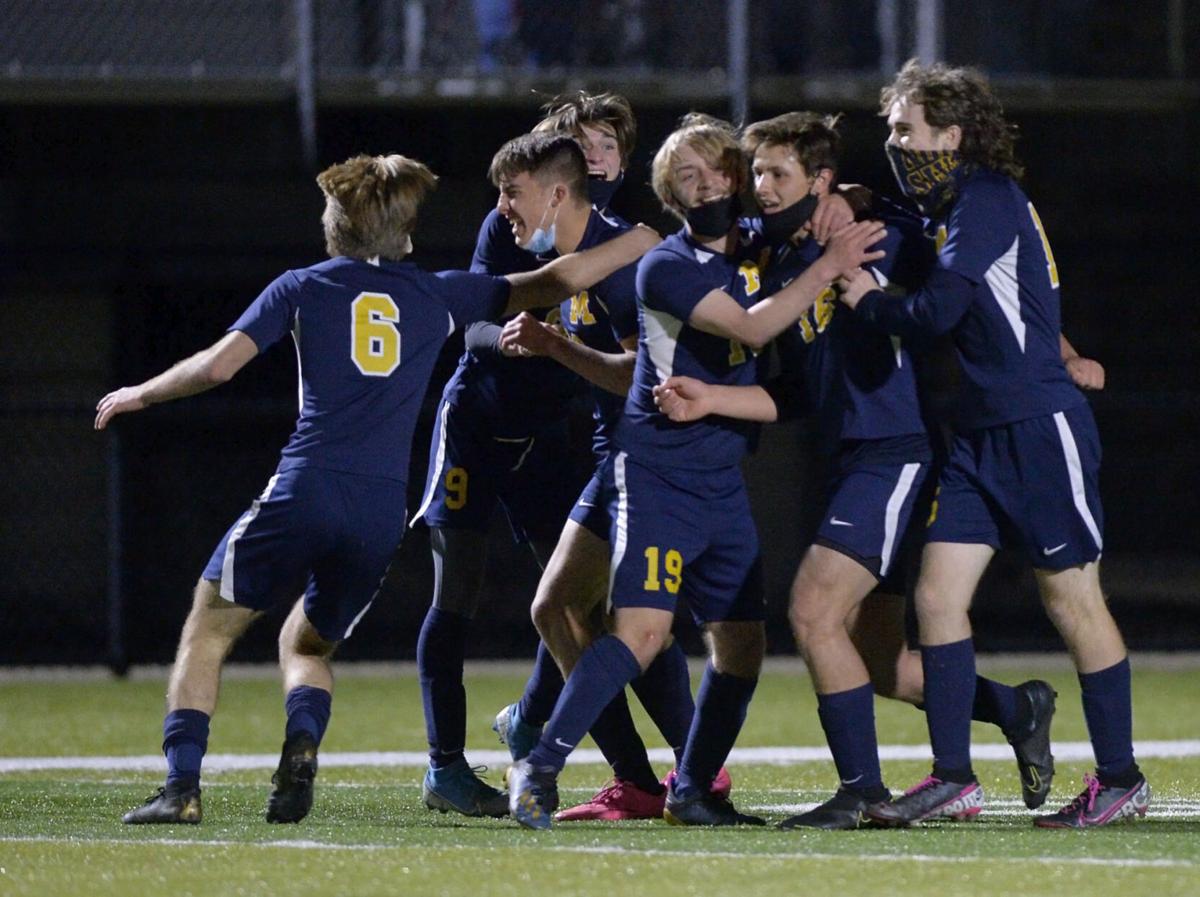 Marion’s Gavin Vickers (16) is mobbed by his teammates after scoring the winning goal in overtime to give the Wildcats at 1-0 win over Carbondale on Thursday in Marion. 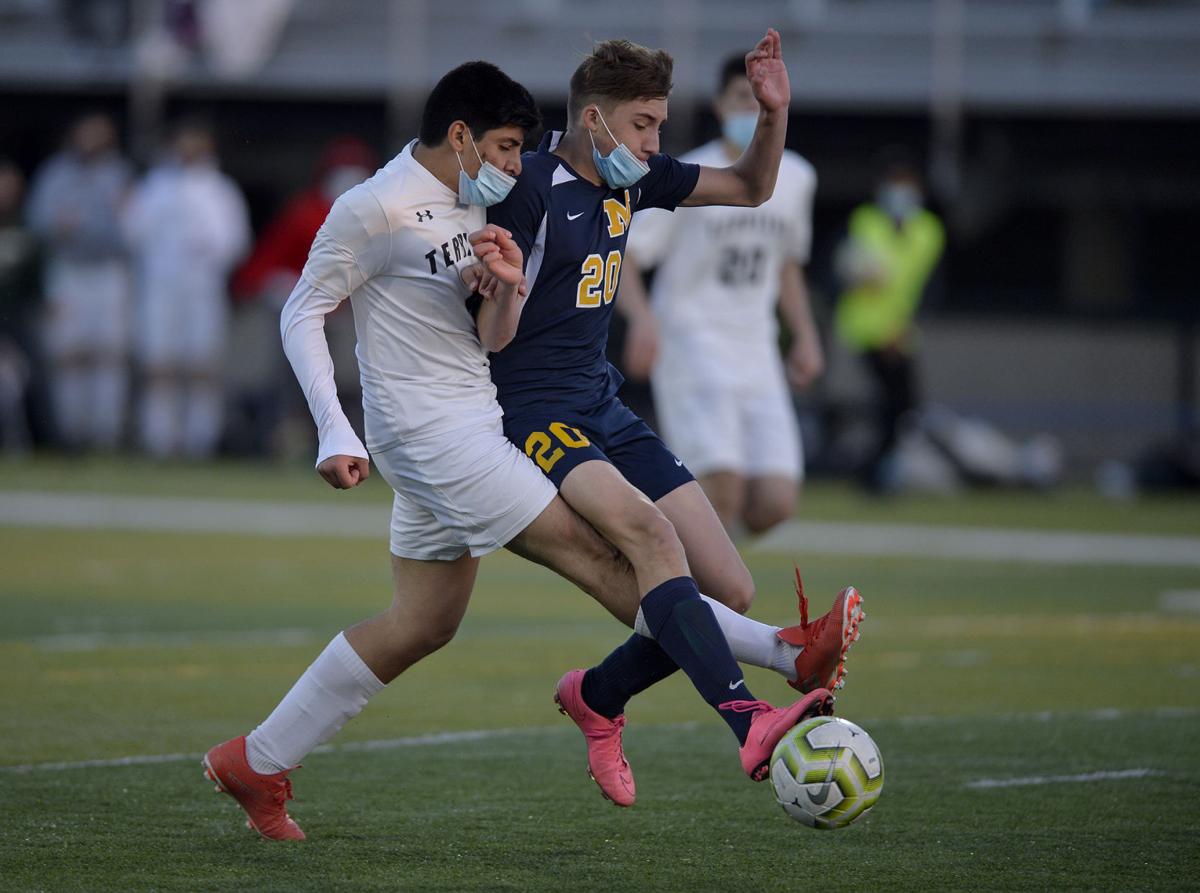 Carbondale’s Moontadhar Nasar (4) and Marion's Camden Doss battle for the ball during the second half on Thursday in Marion. Marion won 1-0 in overtime. 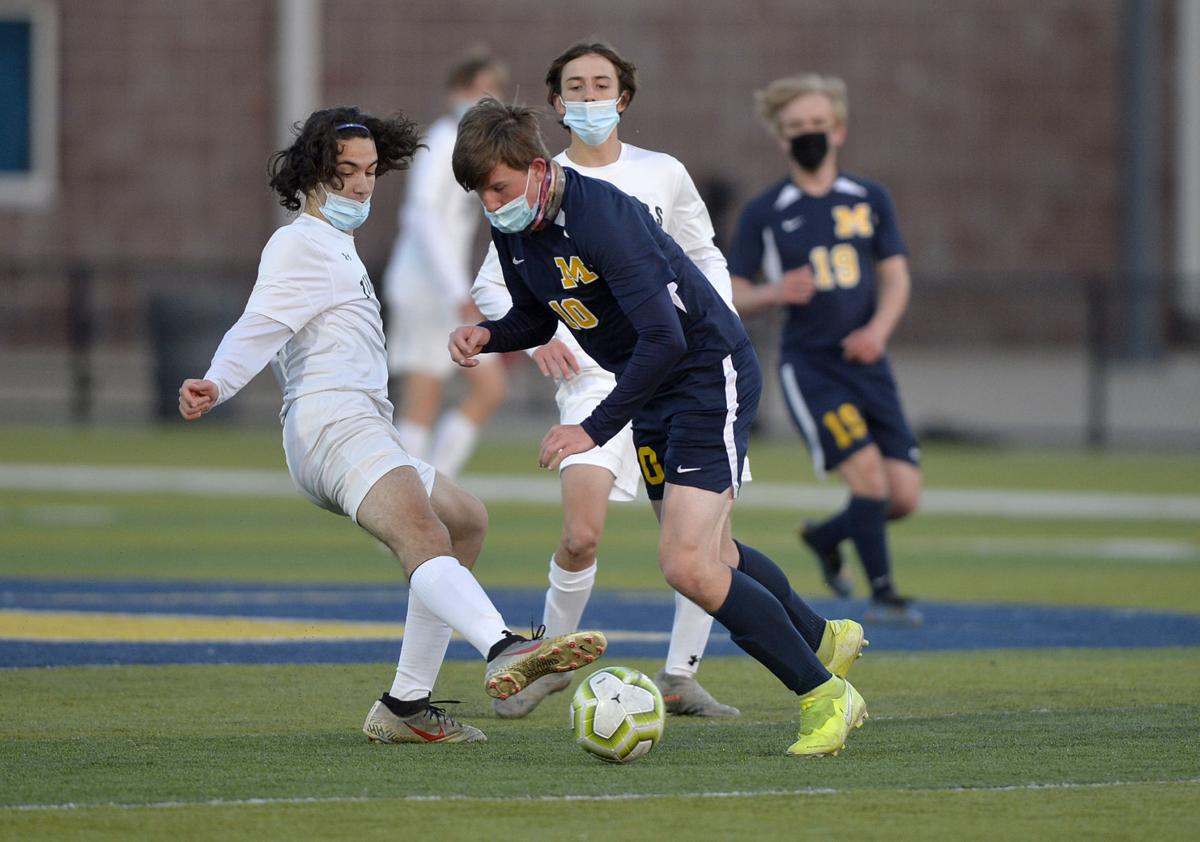 Carbondale’s Eli Guyton (33) pokes the ball away from Marion's Drew Garrett (10) during the second half on Thursday in Marion. Marion won 1-0 in overtime. 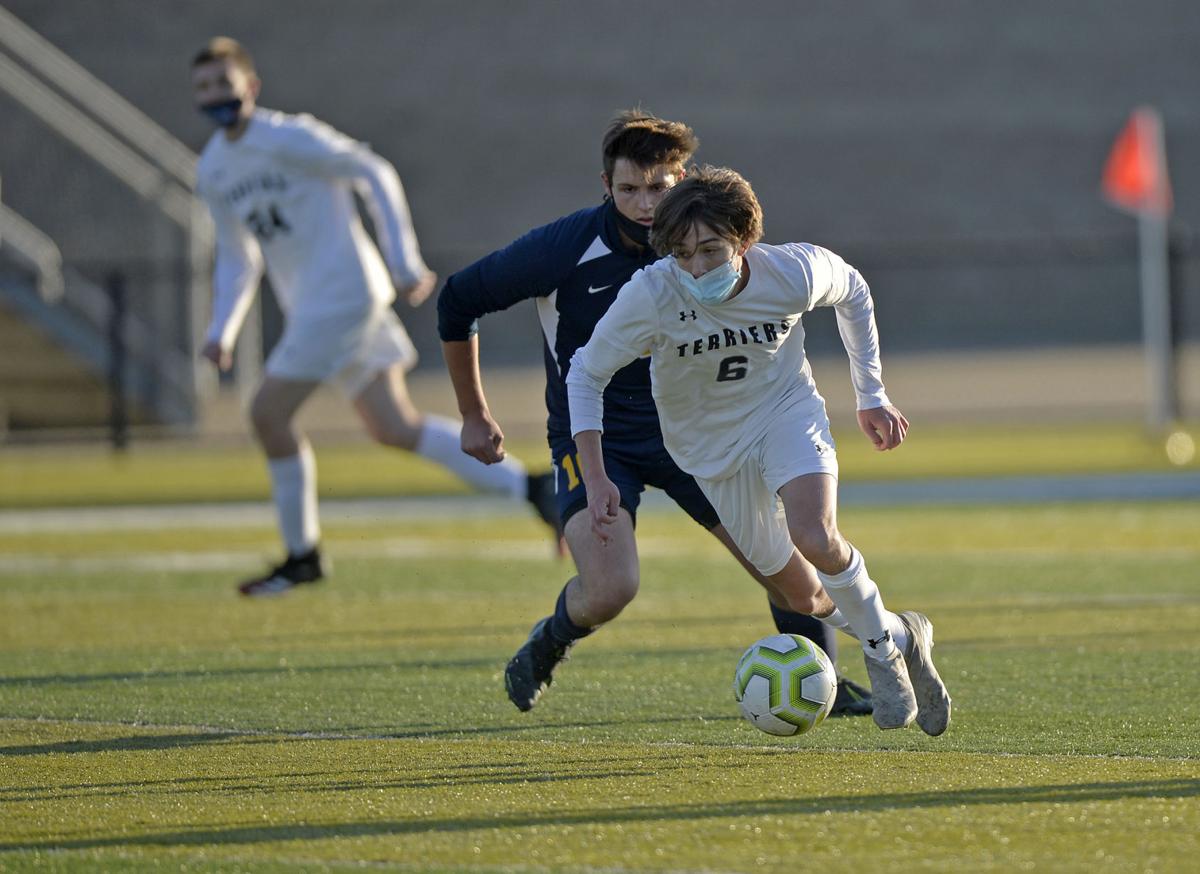 Carbondale’s Nate Torres (6) dribbles away from Marion's Gavin Vickers (16) during the first half on Thursday in Marion. Marion won 1-0 in overtime.

MARION — Gavin Vickers scored his first goal of the season with 45.3 seconds left in the first overtime period to give Marion a 1-0 win over Carbondale and hand the Terriers their first loss of the season in a South Seven boys soccer game Thursday night at Wildcat Stadium.

“We knew we were going to get one in sooner or later,” Vickers said. “We just got a good through ball and I was on the back post and it went in. Gabriel Bradley sent the cross pass and I was able to kick it in with my left foot.”

“The boys wanted to beat Carbondale this year, especially the seniors, because the last several years we’ve struggled to beat them and tonight we came out and did it.” said Marion coach Rob Underwood.

Earlier in the overtime period Marion, took advantage of a Carbondale mistake that awarded them a corner kick left, which resulted in a scramble in front of the Terrier net and a shot that hit the left goal post.

“They played a three-man back and threw (TJ Person) in a sweeper we struggled to get the ball past him,” Underwood said. “Eventually, I guess we wore him down when we put speed up top, so we could get those through balls and get those scoring opportunities.”

During the scramble, Terrier goalkeeper Alex VanWinkle was shook up and he was replaced by center midfielder Nathaniel Pimentel, who was the Terrier keeper several years.

“It’s Marion and Carbondale and it usually comes down to a one goal games and it’s usually a late goal that pulls somebody away,” said Carbondale coach Jeff Hansen. “We knew this was the type of game we were coming for and we just didn’t finish.”

Before VanWinkle returned between the pipes 2:34 later on another corner kick, Pimentel had an official save on a shot from the middle by Ricky Wade. On his returning play VanWinkle grabbed the corner kick in the air.

The best scoring opportunity of the second half came with 4:27 remaining when the Wildcats had two great chances in front of the net, but the first was deflected by the Terrier defense and when Terrier goalkeeper lost track of the ball the Marion shot was stopped by Pimentel, who headed the ball out.

After a scoreless first half, Marion had the first good scoring chance in the second half eight minutes in, but Chase Banks shot from the middle sailed wide left. With 29:11 left Vickers got a strong shot off from the left side, but VanWinkle made the save.

Three minutes later Marion kept the pressure in the Carbondale end, but Luca DiMaggio blocked two consecutive shots in the field to clear the ball out. Marion got the ball back with 21:45 remaining when Wade found freshman Daniel Hernandez open on the left wing, but his shot was easily stopped by VanWinkle.

Hernandez was open again on the left side two minutes later, but again VanWinkle was able to handle his shot.

In a span of seven minutes starting with 19 minutes remaining, Carbondale junior Nate Torres had three good scoring opportunities, but the first one was blocked, the second was stolen and the third went over the net.

Torres got the Terriers off to a good start from the kickoff with a shot from the left side, but it sailed just wide of the right goalpost 18 seconds in. Marion got the first shot on goal five minutes later, but VanWinkle made the save.

With 30 minutes left in the half Torres set up Eli Guyton on a long pass, but Marion goalkeeper Dyson Roye came out of the goal and slid to the ball before Guyton could get a shot off.

Three minutes later Torres stole the ball in front of Roye, but this time his shot missed the net to the right again, but by 10 feet.

With 18 minutes left Marion had the ball near the Carbondale goal and had two shots that couldn’t get through the Terrier defense forcing two corner kicks. Hernandez’s kick on the second one was grabbed by VanWinkle to end the threat.

Carbondale kept pressuring and with 5:39 remaining Torres and Khalil Oues combined on a give-and-go, but Torres’ shot was deflected by the Wildcat defense.

Forty seconds later Max Johnson finally got Carbondale’s first shot on goal, but Roye was up to the task and made the save. The Terriers final scoring opportunity came a minute later, but Pimentel’s shot was wide to the left.

The Southern Illinois River-to-River Conference announced on Tuesday its approval of a divisional realignment that will take place amongst the Mississippi and Ohio Divisions as soon as the 2023-24 school year.

It took until Week 5, but the high school football season in Southern Illinois has officially been impacted by COVID-19.

Things looked bleak for the Murphysboro volleyball team when it trailed Massac County by eight points in the third match Thursday night, ut the Red Devils shifted into another gear and rallied to a victory.

Prep Football | No harm, no foul, no win: Carbondale falls to Cahokia

Johnston City quarterback and safety Austin Brown is up to 17 FBS offers and counting before the halfway point of his junior season.

Junior quarterback Austin Brown rushed for 109 yards and passed for a touchdown to lead Johnston City to a road win over Sesser-Valier Saturday in the Black Diamond Conference.

The calendar said it was two days before Easter, but the weather and the atmosphere at Wildcat Stadium sure felt like October when Marion romped past Mount Vernon to improve 3-0 in this peculiar spring season.

Nashville’s football team won’t get a chance to play in a second straight Class 2A championship game this year, thanks to a pandemic-shortened season. But coach Steve Kozuszek has found a way to motivate his team.

Marion’s Gavin Vickers (16) is mobbed by his teammates after scoring the winning goal in overtime to give the Wildcats at 1-0 win over Carbondale on Thursday in Marion.

Carbondale’s Moontadhar Nasar (4) and Marion's Camden Doss battle for the ball during the second half on Thursday in Marion. Marion won 1-0 in overtime.

Carbondale’s Eli Guyton (33) pokes the ball away from Marion's Drew Garrett (10) during the second half on Thursday in Marion. Marion won 1-0 in overtime.

Carbondale’s Nate Torres (6) dribbles away from Marion's Gavin Vickers (16) during the first half on Thursday in Marion. Marion won 1-0 in overtime.