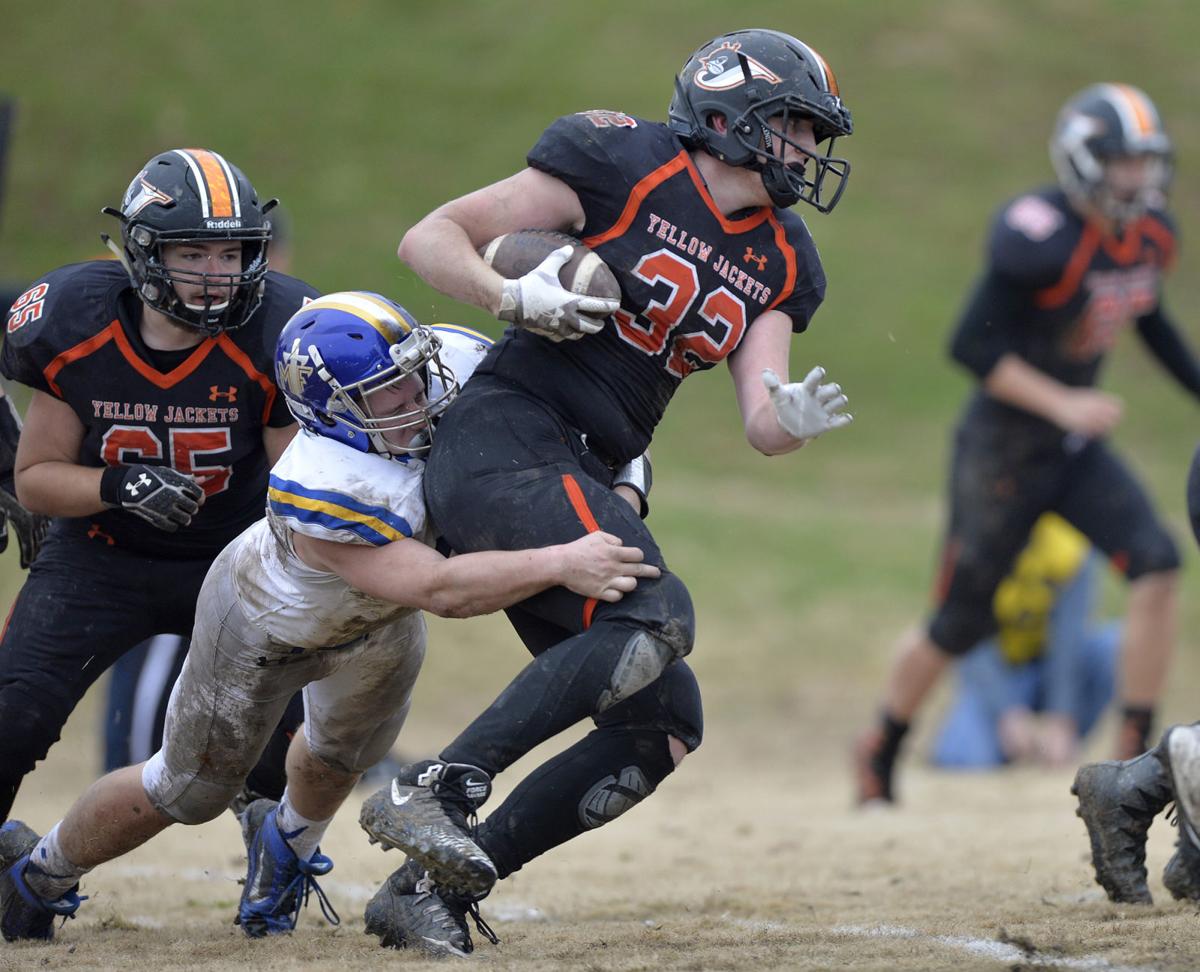 Chester running back Drake Bollman (32) is tackled by Maroa-Forsyth linebacker Tanner Hetz (51) during a second round 2A football playoff game in Chester in 2018. 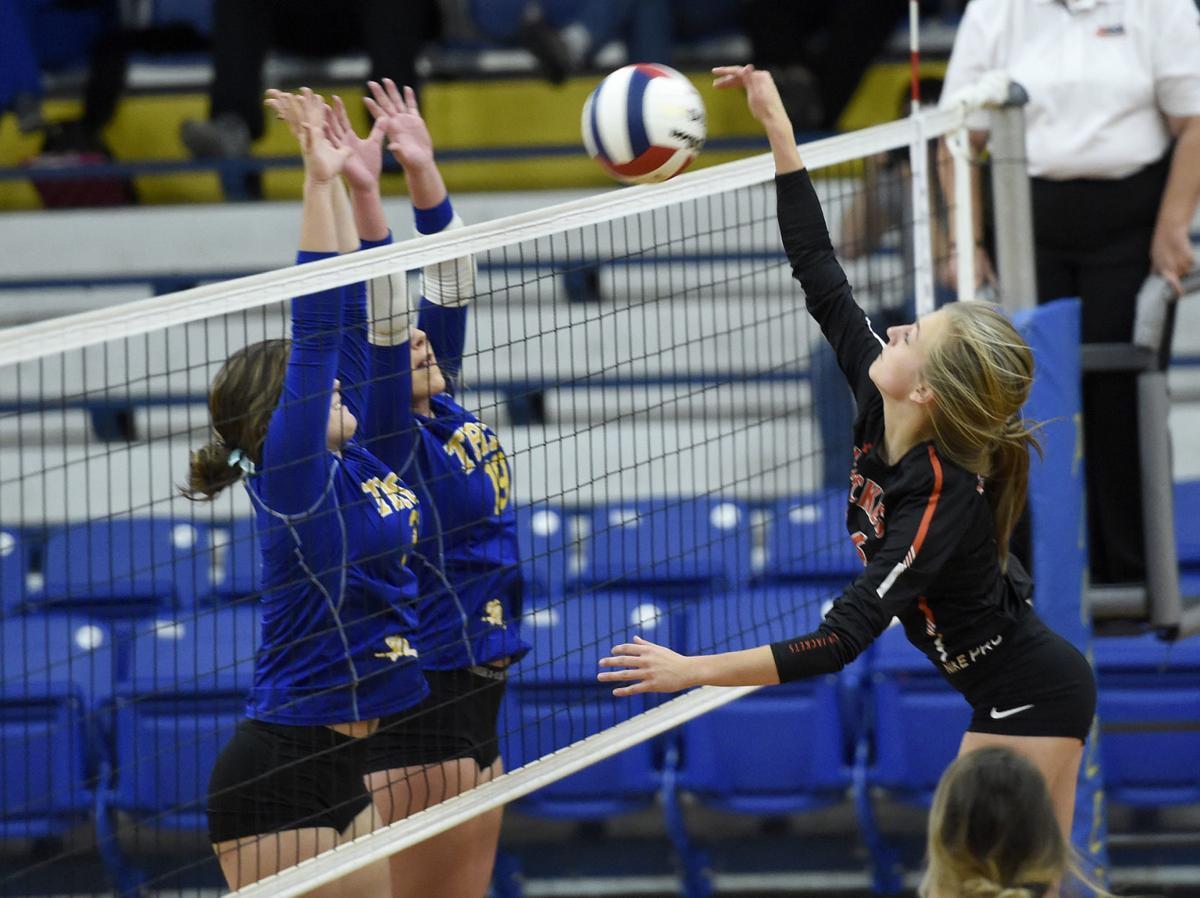 Chester’s Josie Kattenbraker (16) looks to hit past the block by Trico’s Bailey Kuhnert (3) and Rayahna Foutch (19) during the 2A volleyball regional at Trico High School on Oct. 28 in Campbell Hill. 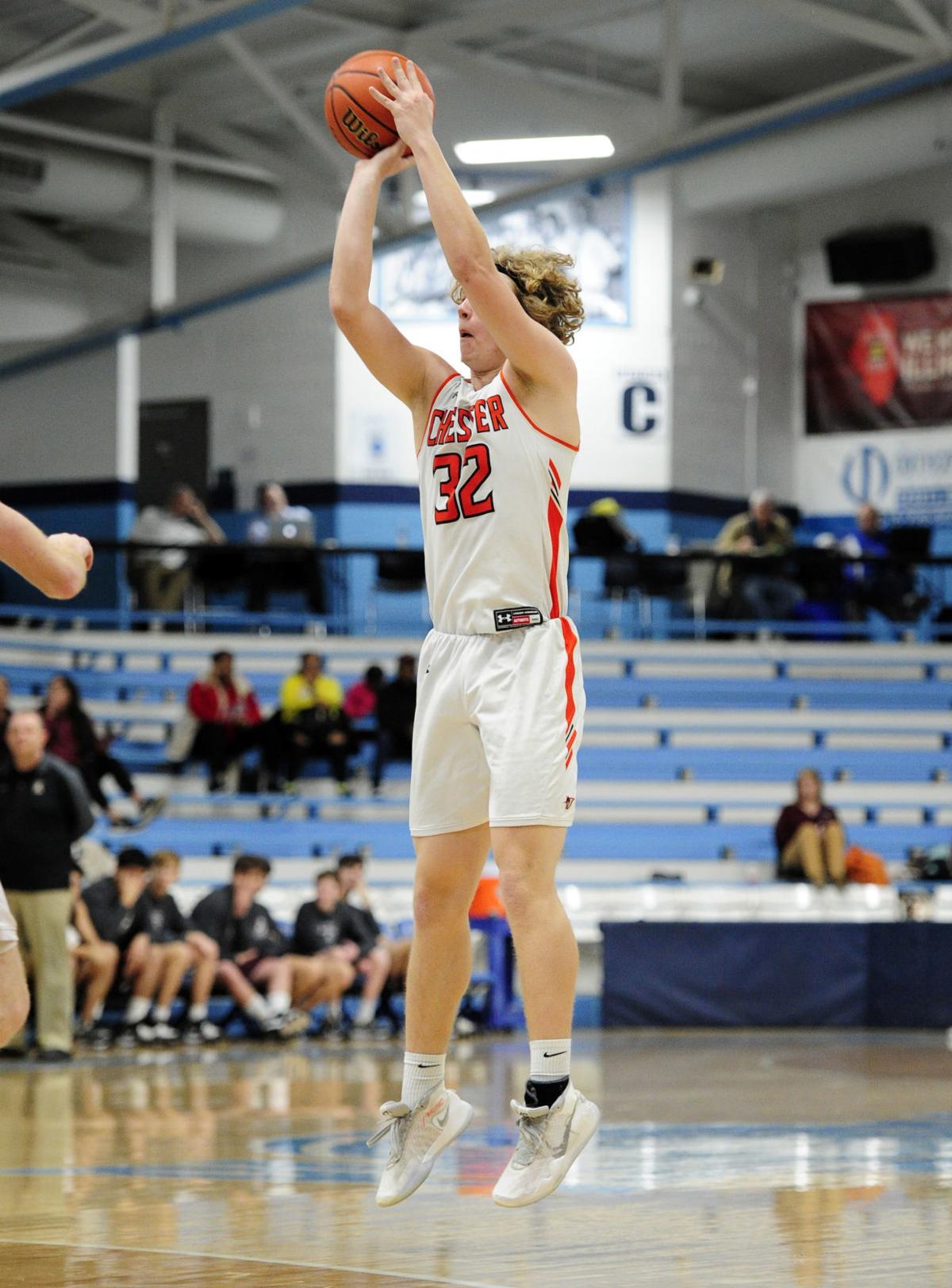 Chester forward Ian Reith puts up a 3-point shot during the Cobden Appleknockers 50-34 win over the Chester Yellow Jackets in the Panther Basketball Showcase at Thomas Gymnasium on Saturday in Pinckneyville.

Chester made official one of the worst-kept secrets in Southern Illinois on Thursday night.

Its school board accepted an offer to join the Cahokia Conference and leave the Black Diamond Conference no later than the 2022-23 school year. The decision means that in two years, the Cahokia will have 18 schools in three divisions.

“I think it’s going to be a great move for our school,” said Yellow Jackets football coach Billy Belton. “We’re going to play schools much closer to us geographically and we’re playing schools that are about our size.

“I have enjoyed our time in the Black Diamond. Every game in that league, you’re playing a (Class) 2A school, and the coaches do a great job in the Diamond. But it makes more sense for our school to be in the Cahokia.”

A geographic outlier in the BDC, Chester will be in a much better spot in its Cahokia division. Randolph County neighbors Red Bud and Sparta are less than 30 minutes away, while future foes Okawville, Carlyle and Trenton Wesclin still don’t pose the same type of onerous travel the Yellow Jackets’ football team faces this year.

Athletic director Jeremy Blechle said earlier this month that the team will log about 1,200 miles on buses for five varsity road games. This is the year that Chester must travel to the three most eastern schools in the BDC — Carmi-White County, Edwards County and Fairfield.

The school board voted unanimously to approve the move. BDC by-laws require that a departing school must give two years’ notice.

Blechle and Superintendent Brian Pasero recommended on May 29 that the school depart the BDC. The Yellow Jackets have resided in the BDC since 2010, when they left SIRR Mississippi as Carterville replaced them.

Chester has experienced decent success in most sports as a BDC member. Bryan Lee built the football program into a perennial favorite, making a postseason breakthrough in 2014 and reaching the Class 2A quarterfinals.

Blechle and Belton have kept things rolling since Lee departed to rebuild Carbondale’s program in 2015. Belton has earned playoff berths in all three of his seasons at the helm, even winning a first round road game in 2018.

Blechle guided the baseball team to a 2A regional title in 2014, only its second regional crown since the famed 1999 team went 27-3-1 and lost in the Marissa Sectional finals to Nashville. Almost every other sports program at the school has had its moments as well.

But travel was a constant issue for the Yellow Jackets, even in winter and spring sports when they were part of the BDC West. Trips to Goreville, Sesser-Valier, Zeigler-Royalton and Christopher weren’t exactly short hops over the hill.

“I believe that has always been a concern for our community and our students,” Blechle said last month after announcing the recommendation to accept the Cahokia’s invitation. “Other Black Diamond schools would say the same thing about going to Chester.

“I think that motivation has been there for some time and that is one of the main factors that factored into the decision of the administration.”

Chester became the fifth school to accept a Cahokia invitation in less than a month. Roxana, Okawville, East Alton Wood River and Sparta were the first four. Sparta’s school board approved the move on June 12, and will join its new conference in 2021-22.

As high schools and their athletic department get ready to ramp up workouts into Phase 4 of the IHSA’s plan to get back into games this fall, …

IHSA schools, athletes and coaches got a 4th of July present from the Illinois Department of Public Health on Friday.

Pinckneyville has joined its Perry County rival on the sidelines for the week’s remainder.

On Wednesday, the IHSA released Phase 2 of its Return to Play Plan, featuring the return of sport-specific drills and up to 20 contact days for coaches to work with their players prior to the start of fall sports practice on August 10.

Chester running back Drake Bollman (32) is tackled by Maroa-Forsyth linebacker Tanner Hetz (51) during a second round 2A football playoff game in Chester in 2018.

Chester’s Josie Kattenbraker (16) looks to hit past the block by Trico’s Bailey Kuhnert (3) and Rayahna Foutch (19) during the 2A volleyball regional at Trico High School on Oct. 28 in Campbell Hill.

Chester forward Ian Reith puts up a 3-point shot during the Cobden Appleknockers 50-34 win over the Chester Yellow Jackets in the Panther Basketball Showcase at Thomas Gymnasium on Saturday in Pinckneyville.