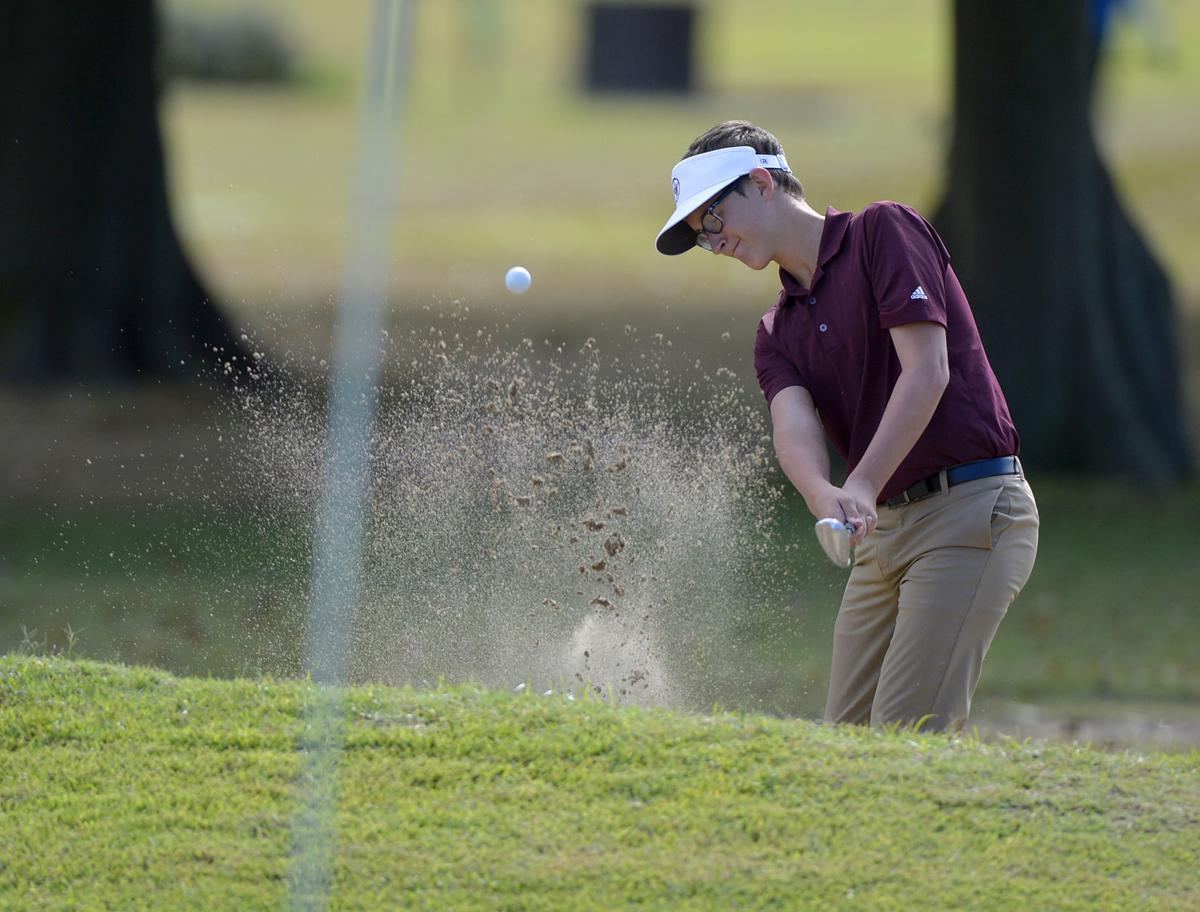 Benton’s Cy Norman blasts out of the sand on the ninth hole during the Class 2A Regional at Crab Orchard Golf Club in Carterville on Oct. 7. 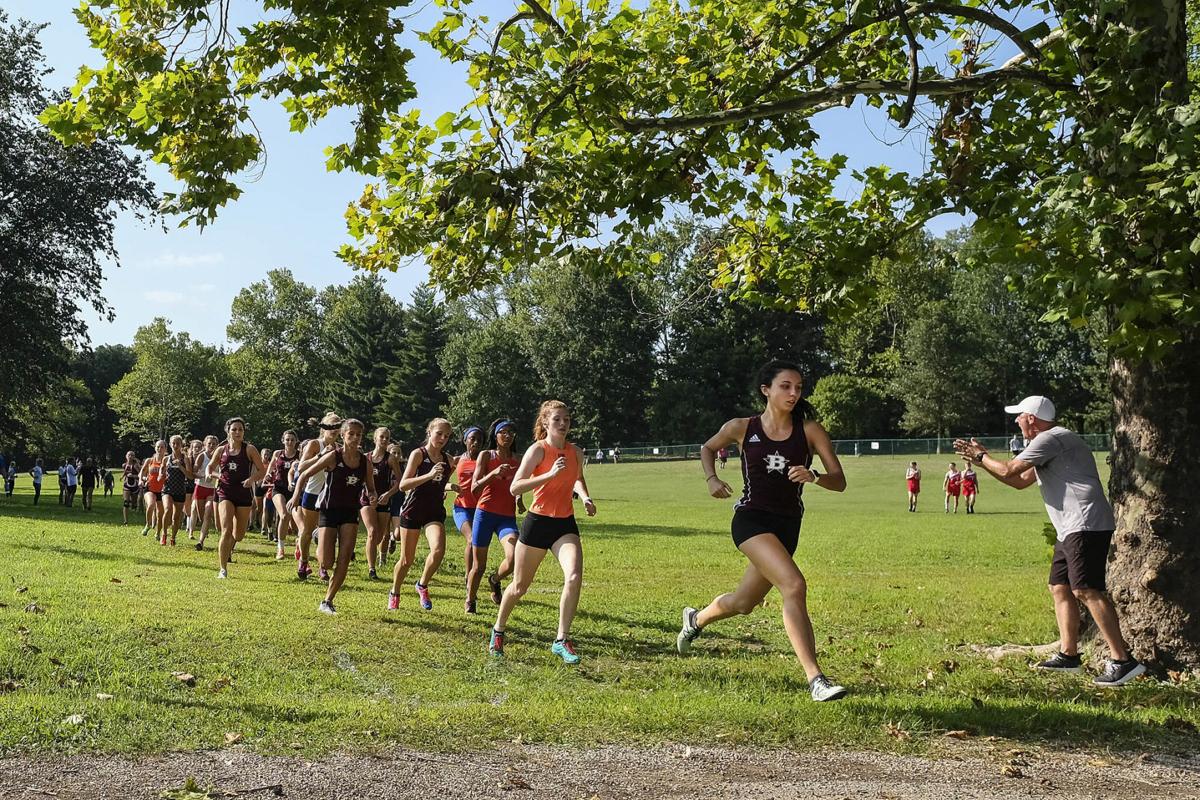 The girls’ field heads out on the course during the Murphysboro Invitational cross country meet on Sept. 4 at Riverside Park in Murphysboro.

A crisply-struck iron shot that lands inches from the pin. A well-placed forehand that clips the baseline. That well-timed charge at the end of a cross country race which earns a runner first place.

If you’re a high school sports fan and you’re looking to get your fix this fall, better learn to appreciate those things.

The IHSA’s decision Wednesday to split their sports seasons into four separate entities came with some dramatic ramifications. Chief among them was moving football, volleyball and boys soccer from the fall to the spring.

Teamed with the organization’s decision to not switch spring sports such as baseball, softball and track and field to the fall, it’s left the calendar a bit bare. And it’s left people like Benton golf coach Reggie Norman feeling a bit sad for the school’s football squad.

“My first reaction was that a lot of kids won’t get to compete this fall because they’re football guys,” he said. “I wasn’t really worried about golf, but I was hoping and praying that the football guys get to play.”

The sports that will get to play are the ones that naturally achieve social distancing. Golfers play on holes that measure as far as 600 feet from tee to pin. Tennis players stare across a net at each other, and in cross country, the start/finish line is the only real area of concern.

To that end, Du Quoin cross country coach Eric Kirkpatrick said Thursday that he and other coaches are working to determine proper protocol for things like starting a race.

“Can we stagger-start 50 runners or can we do the whole group at once? We’re trying to get clarification so we can get consistency with the rules. We want to follow CDC guidelines,” Kirkpatrick said. “We don’t know what a meet will look like.”

What Kirkpatrick, Norman and other coaches know is that they finally got to deliver their athletes some good news after months of serving as bearers of gloom. “Hang in there” was actually replaced by “we’re playing.”

Not that the good news doesn’t come with a dollop of extra work attached. Kirkpatrick and other cross country coaches in SIRR Mississippi and Ohio are working to deliver a composite schedule to their athletic directors.

“If we can present something to them that they can approve … it’s got to be easier than making them do it on their own,” he said. “It’s not like (Du Quoin athletic director) Derek Beard doesn’t have enough on his plate right now.

“He’s having to reschedule games and get officials all over again. All these schools are fighting to get the same officials. Anything we can do to make his job easier, I’m sure it would help.”

The toughest thing about the last 4 ½ months for Norman has been an inability to see his golfers in person. While group texts and Zoom calls have enabled him to check in when necessary, it’s not the same as seeing them in the flesh.

Usually, Norman has already seen enough of his players through the summer that by this time, he knows who’s playing.

“It’s been weird,” he said. “I know my guys have been playing tournaments all summer, whether out of state or in-state. I don’t have any reason to believe they’re not getting work in. But it’s weird not to see them on a regular basis.”

Barring another change of heart by the Governor’s Office and the Department of Public Health, Norman will get to see his golfers soon. And other coaches can start drawing up practice plans, as well as perhaps dealing with more media attention than normal.

It’s a dilemma that Kirkpatrick is glad to have.

“The kids finally got a win,” he said. “We’ve delivered a lot of bad news since March. This is good for them.”

They will follow IHSA stipulations regarding social distancing. Teams will be limited to two playing dates per week, although one of them can be a doubleheader against the same opponent in baseball and softball.

The organization will meet again on August 25 to determine whether to conduct postseason play.

When I moved here in January 2012, I knew next to nothing about prep sports in Southern Illinois. Nearly nine years later, there are some of y…

How McCracken County — and other high schools in Kentucky — are playing football games is a story of discipline, denial and determination. Forget Patches O’Houlihan in Dodgeball. These three Ds are ruling the athletic year in Kentucky.

The competition couldn't have been much tighter Tuesday when Herrin High School hosted Marion in girls tennis at the Harrison-Bruce Sports Complex.

Where Are They Now? | Marion's Ivy was complete running back

About a decade ago, Ryan Goodisky and the Rams got a first-hand look at the skill and toughness of Wildcats running back Shekeil Ivy.

Massac County survived brutal heat and humidity Wednesday at the Links at Kokopelli to beat their biggest rival this year, Marion, by 19 strokes in the Lady Cat Invitational.

It's been a full four decades since Jim ("Jimmy") Mitchell dominated the Black Diamond Conference in basketball.

The SIRR Mississippi division was represented at the Benton Invitational by the host Rangers, Massac County and Murphysboro in a 25 player competition at Benton Country Club.

Cobden and Shawnee played on Friday at Blayne Smith Field, where Shawnee took advantage of a plethora of Cobden mistakes early to post a win.

Benton’s Cy Norman blasts out of the sand on the ninth hole during the Class 2A Regional at Crab Orchard Golf Club in Carterville on Oct. 7.

The girls’ field heads out on the course during the Murphysboro Invitational cross country meet on Sept. 4 at Riverside Park in Murphysboro.