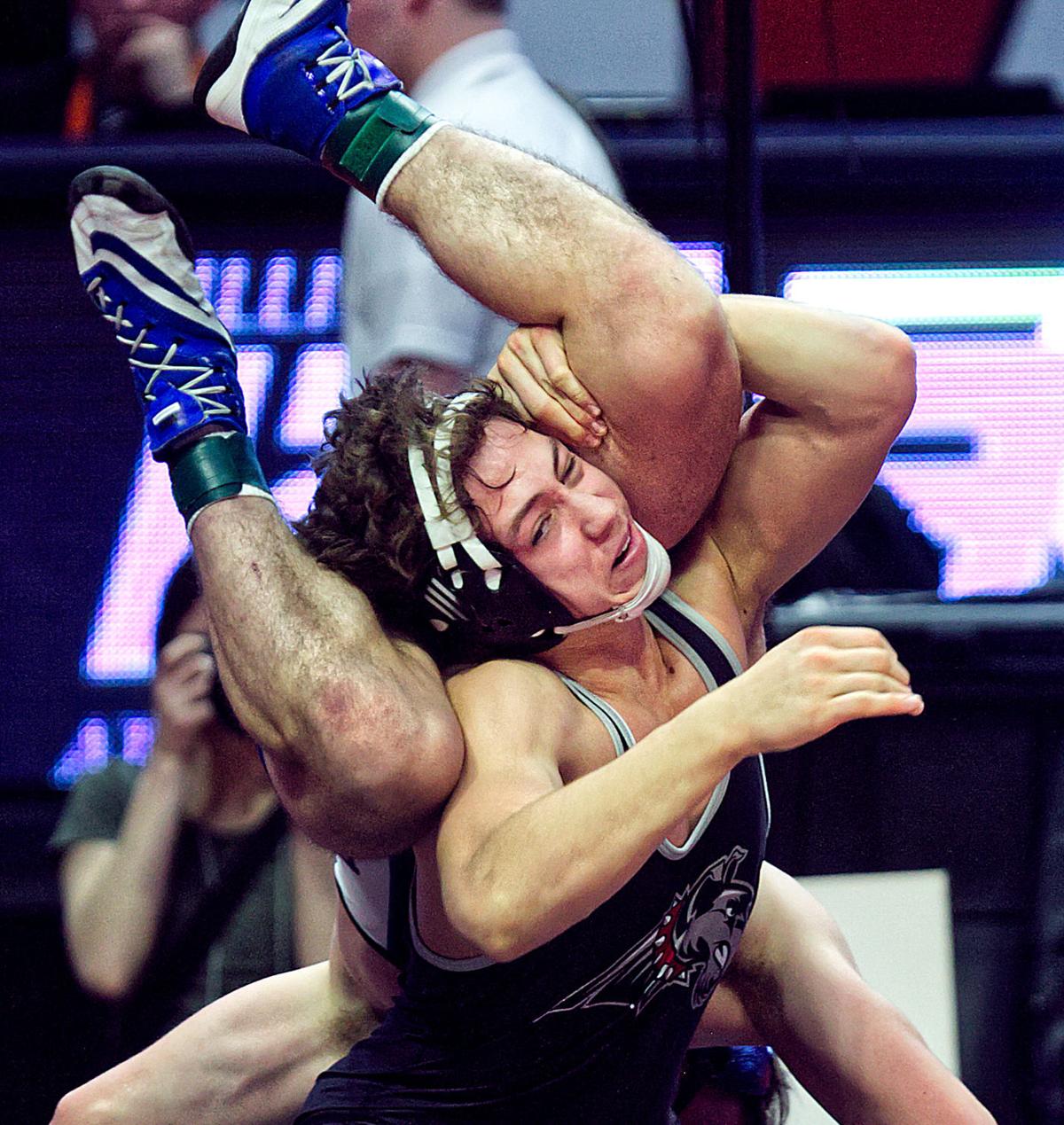 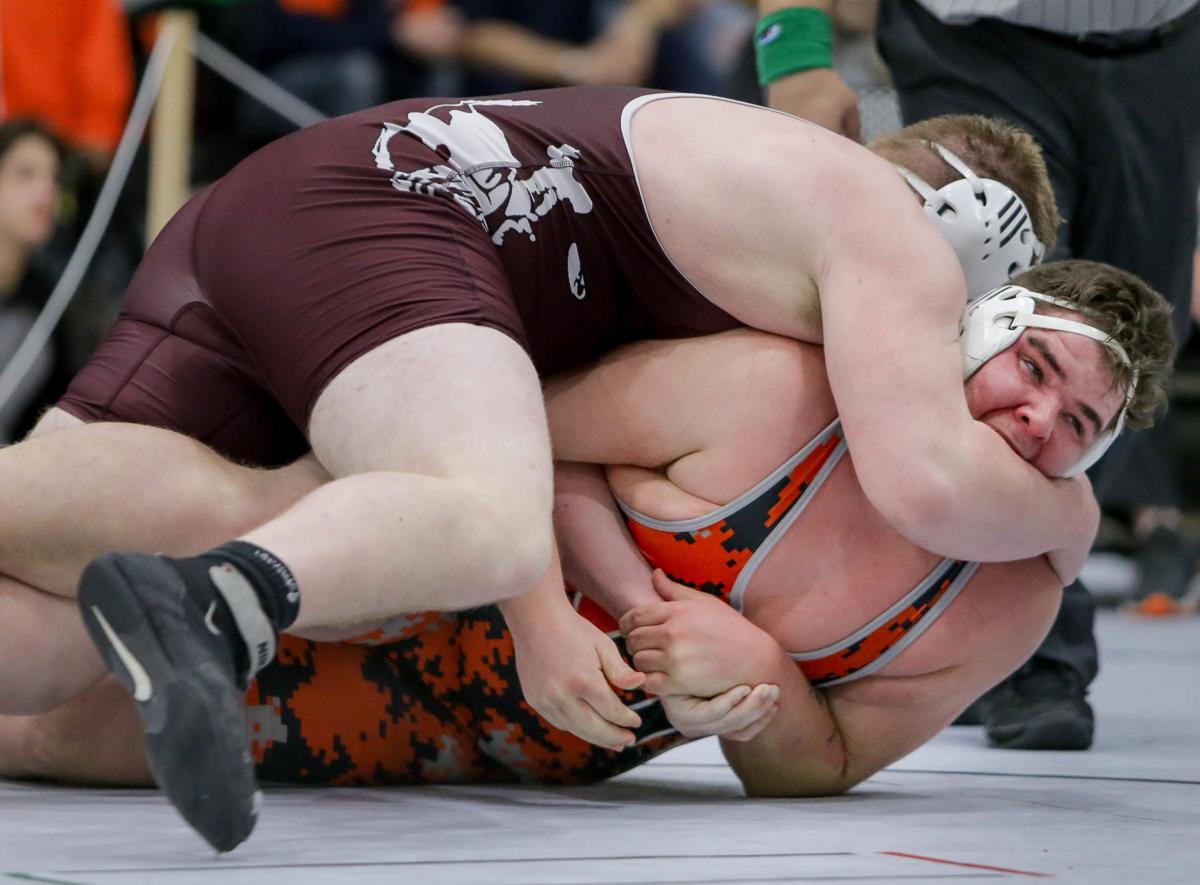 Olney-Richland County's Skylar Sutton attempts to get out of a pin by Benton's Gabe Craig on Jan. 11, 2020, during the 285-pound final of the 59th Annual Murdale Wrestling Invite at Carbondale High School.

Local high school wrestling programs will take to the mats this week for the beginning of a shortened COVID-19 season.

“I think most of the teams will be behind the eight ball for their first matches,” said Marion coach Darren Lindsey. “A lot of the kids haven’t done much for the last year and a half, and usually we get three or four weeks to prepare for the first match.”

This season will only have dual meets with no tournaments. The regular season will end on June 12th without an IHSA sanctioned postseason, but the IWCOA (Illinois Wrestling Coaches and Officials Association) intends to sponsor unofficial regionals, sectionals and a championship tournament starting the next day.

“Anybody with a full team will have a huge advantage,” said Murphysboro coach Shea Baker. “This really hit us hard and it’s hitting the youth levels hard. They weren’t able to wrestle in the youth leagues, so that’s hurt us, especially if we’re still struggling next year with this.”

Most programs would easily have 25-30 wrestlers, but the trend has been down in recent years, and this year programs have hit rock bottom.

“I don’t have enough,” said Carbondale coach Jerry Richards. “I would have had several more out if it had been our normal time of the year."

Harrisburg coach Greg Langley hopes to have as many as 35 on his roster when the Bulldogs' football players make their appearance.

“Most of my wrestlers are football players and I lost three to baseball,” Langley said. “We’ll mostly be juniors and sophomores with only three or four seniors and maybe one freshman, so they will be thrown in the fire and we’ll see what happens and have fun doing it."

Benton coach Aaron Robinson has 20 to 22 wrestlers back to go for the Rangers' third consecutive SIRR-Ohio Division title. Robinson has Class 1A state qualifier senior heavyweight Gabe Craig back after a banner junior season where he posted a 49-3 record.

“I would love to get our guys their 40-50 matches in as normal, but it’s difficult this year,” Robinson said.

Also back are Class 1A sectional qualifiers senior Tyler Golliher, who was 30-20 at 145, and junior Holden Allsopp, who was 18-23 at 126. The plans are for both to bump up a weight class.

Cahokia coach Emanuel Brooks will start the season with 20 wrestlers led by four Class 2A sectional qualifiers, including three seniors with 31 or more wins last year.

West Frankfort coach Rich Arrington has 20 wrestlers on his roster led by three-time sectional qualifier Trenton Schack, who was 27-7 at 106 last year and will wrestle at either 113 or 120 this year, and sophomore Gavin Mann, who was a sectional qualifier at 126 as a freshman and finished with a 30-15 record. Mann is expected to bump up to 138 this season.

Arrington has a young team with only two seniors and nine sophomores and freshmen. His other senior Shane Irvin (15-26) is a three-year varsity wrestler who will bump up from 138 to 152. Junior Eli Futch (18-14) will also be a key member settling in at either 113 or 120 after wrestling at 126 last year.

“We’ve got decent numbers, but I have five kids within five pounds of each, so it’s going to be a lot of kids getting bumped up a little bit more,” Arrington said.

Marion coach Darren Lindsey has just two seniors and five juniors on his roster, but has four 30 or more match winners to defend the South Seven title the Wildcats shared with Cahokia last year.

“We can only wrestle teams in our region or conference and I think we’re going to be one of the better teams in the south,” Lindsey said. “Without having an official state series this year, a plus is we will be able to defend our conference title.”

Lindsey’s squad is led by two alternate state qualifiers and two other sectional qualifiers. Junior Nate Dampier (35-7) was alternate at 128 and has added enough muscle to bump up 170 this year, as was sophomore heavyweight Kanye Gunn (37-15) as a freshman.

Anna-Jonesboro has one returning state qualifier and three returning sectional qualifiers on the roster for coach Chase Hargrave to build around.

“We’ve got our core kids back from last year, but we’re only going to have one senior and two juniors this year, so we’re going to be pretty young again this year,” Hargrave said.

Junior Blake Mays advanced to the state tournament for the first time last year after missing his freshman year with an injury. He finished with a 36-12 record at the 126 weight class and is expected to bump up to 132 this year.

Former Mount Vernon Rams wrestler Tristan Penrod, who graduated in 2014, takes over at Centralia and he expects to have 12 to 15 wrestlers on his first club including returning Class 2A sectional qualifier junior heavyweight Wesley Gadberry (5-18).

Penrod’s first team will be comprised of mainly juniors and sophomores with no seniors. Junior Noah Morris is expected to have a good year at 152 after posting a 19-12 record at 170 last year.

At Carbondale, Richards has three seniors, six sophomores and three freshmen on his first day roster led by two-time state qualifier Luke Daly, who will be continuing his wrestling career at Michigan State this fall.

Richards also has two sectional qualifiers in senior Gabe Kristiansen, who posted a 22-16 record at 106 and will bump up to 113. Sophomore Samuel Han made a big splash last year advancing to the sectional at 132 despite a 13-14 record. This year he bumps up to 145.

At Murphysboro, Baker has 12 wrestlers on his roster, which includes two transfers from Anna-Jonesboro, junior Arojae Hart, who advanced to the sectional in 20 and finished with a 29-3 record, and his sister senior Amiyah Hart.

“Amiyah is one of the top girls in the nation,” Baker said. "She’s a seasoned wrestler and is going to help us out quite a bit.”

Baker also has two other sectional qualifiers returning. Senior David Penrod posted a 23-16 at 113 and will bump up four weights to wrestle at 138 this year. Sophomore Dayton Hoffman (27-14) is coming off a great start winning his first regional title.

Carterville coach Daniel Alderman will begin his second year at the helm of the Lions with 10 to 15 wrestlers on his roster led by two-time sectional qualifier senior Ezekiel Hernandez, who posted a 16-12 record in the 145 weight class last year.

“I have pretty much an even split with about three or four in each class,” Alderman said.

Alderman will also have junior Winston Suni, who was 14-22 at 113 last year, and freshman Merrick Orendoff at 126 to build around.

Sparta coach Robert Hayes has 11 wrestlers on his opening season roster. His top wrestler is junior Cody Martin at 145, who posted a 24-11 record at 126 last year.

“It’s our last year in the River-to-River Conference before moving to the Cahokia Conference,” Hayes said. “We’re jut going to focus on getting better.”

While Mount Vernon coach Boyd Ballard will begin the season with a 10-man squad, he does have three 30-win sectional qualifiers to anchor his team.

“We’ve got a decent team. The kids have some experience, but we’re real young," Ballard said.

On the low end of the roster numbers is Herrin, with a possible total of four wrestlers. If everything works out, Coach Kelsey Lewis will have two sectional qualifiers back in senior Dustyn Hendrix, who went 23-21 at 160 last year and will bump up to 182 this season. Senior John Coats posted a 23-11 record at 195 last year and he will also bump up a weight class this year to 220.

“I had 20 last year, but what it comes down to it’s not wrestling season — it’s baseball season,” Lewis said.

Rounding out the possible squad is senior Skylar Chandler, who went 24-12 at 152, and sophomore Tyler Yeager, who finished with a 14-26 record at 132. Chandler will either stay at 152 or go down a weight class to 145 while Yeager will bump up several classes to either 160 or 170.

Fairfield coach Jordan Griffith begins his second year at the helm with 18 wrestlers led by sophomore Payton Allen, who posted a 29-8 record and advanced to the sectionals at 220 as a freshman.

Carmi-White County coach Terry Gholson has 16 wrestlers with no returning state or sectional qualifiers. His top four wrestlers are senior Blake Pollard at 195, who was 13-3 at 160 last year, junior Titus Ward at heavyweight and sophomores Isaac King at 182, who went 3-19 at 145 last year, and Layne Gwaltney at 132, who was 14-17 at 113 last year.

At Goreville, Bart Pulliam has only seven returning from last year, led by seniors Memphis Lapatas and Jerry Owen Pulliam.

Trico coach Shane Pierce has only seven wrestlers on his team this year, with four being freshmen. Senior Ross Coleman at 195, senior Kreed Gale at 170, who went 8-11 at 160 last year, and junior Eli Rees, who returns at 152 after going 11-10 last year.

While the numbers are down across the board, overall there are 16 female wrestlers on 10 local teams led by Goreville with five and two each on Marion and Sparta.

“I think you will see a lot more girls wrestling,” Gholson said. “I think the next five years there will be teams down here with full girl teams or close to it.”

Goreville has junior Briella Morgan at 120, sophomores Faith Whittington at 113 and Maddie Craig at 170 and freshmen Ariel Board at 126 and Alivia Ming at 138. Marion has sisters senior Jade Nappier at 285 and sophomore Haylie Nappier-Fayth at 145. Sparta has junior Trinity Glodo at 113 and sophomore Olivia Penny at 182.

Along with the senior Hart from Murphysboro there are four other sophomores Oregon Dover (120) at Anna-Jonesboro, Keely Rulo (182) at Cahoka, Amariah Lipe (152) at Carbondale and Shelbie Arrington (120) at West Frankfort and two other freshmen Valerie Reynolds (160) at Centralia and Cynthia Mackie (160) at Trico.

Murphysboro remained undefeated and unscored upon after beating Carterville-Herrin in a River-to-River girls soccer match held on the turf at “Doc” Bencini Field on Thursday.

In a game that came down to penalty kicks, Carbondale scored on two in the second half to beat Anna-Jonesboro, who scored on one in the first half, in a nonconference girls soccer match at the Union County Recreation Complex on Saturday morning

The Marion Wildcats improved to 6-0 this spring following a shellacking of the Herrin Tigers Friday afternoon at Herrin City Park.

Megan Bernardini’s solo home run in the fifth inning was massive, but not Elverado’s only shining moment in Thursday’s victory against Goreville.

The best shooter in the region, Zeigler-Royalton's Sean Connor was one of three 2,000 point scorers in Black Diamond Conference during the 1980s.

It was no secret how jam-packed the high school sports season would get once April rolled around.

It's been two full years since girls competed in track and field events. In Southern Illinois, the Du Quoin Indians were the toast of the town and the envy of all area schools after capturing a state championship.

Olney-Richland County's Skylar Sutton attempts to get out of a pin by Benton's Gabe Craig on Jan. 11, 2020, during the 285-pound final of the 59th Annual Murdale Wrestling Invite at Carbondale High School.