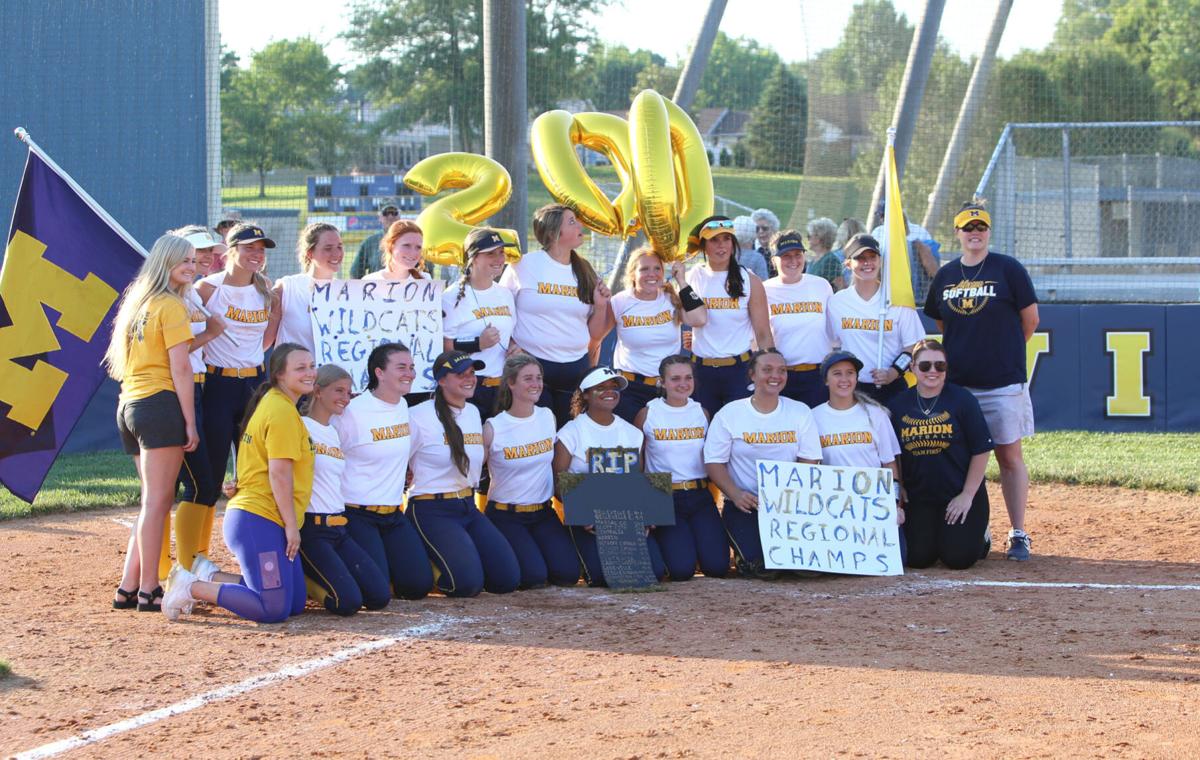 Marion's softball players and coaches pose for a picture after Friday's IHSA Class 3A high school regional softball game between Marion and Carbondale at the Crisp Sports Complex in Marion. 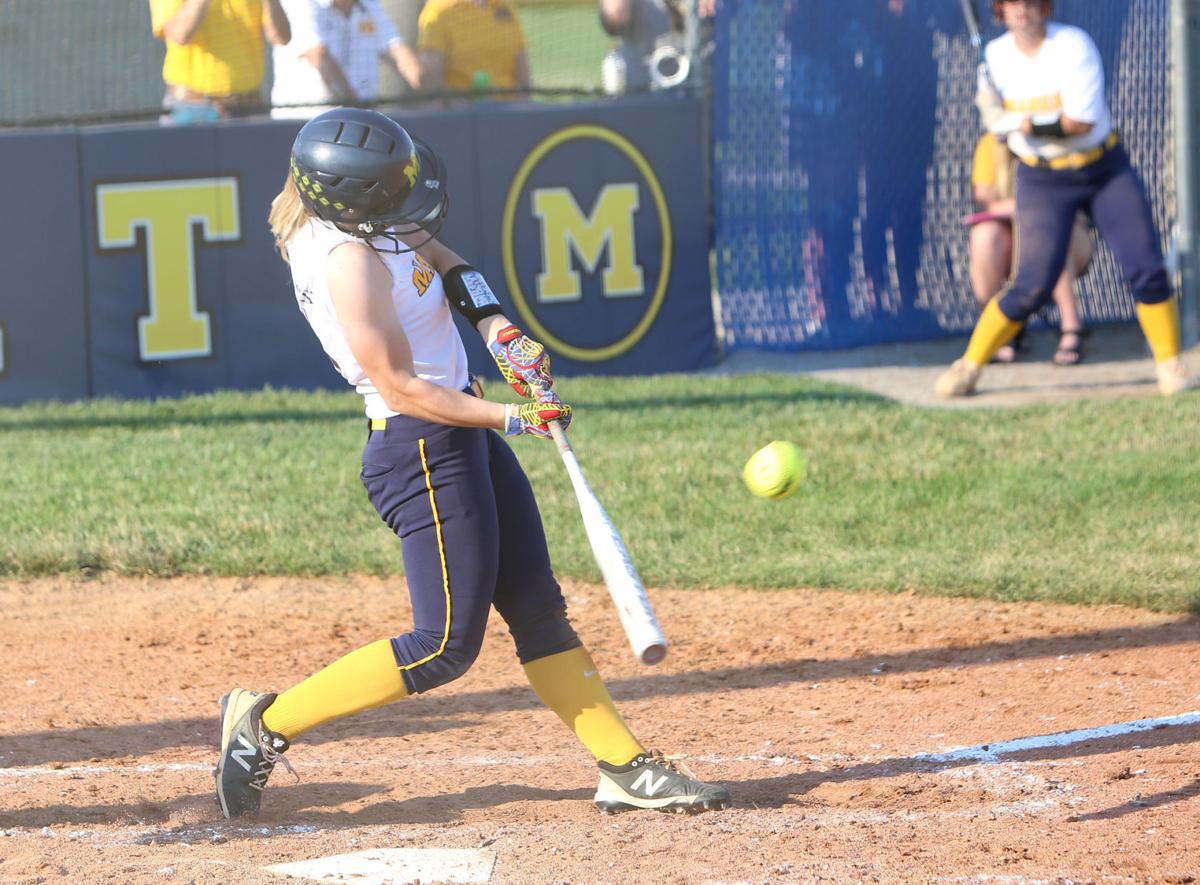 Marion's Karris Rhine hits a three-run homer in the sixth inning during Friday's IHSA Class 3A high school regional softball game between Marion and Carbondale at the Crisp Sports Complex in Marion. 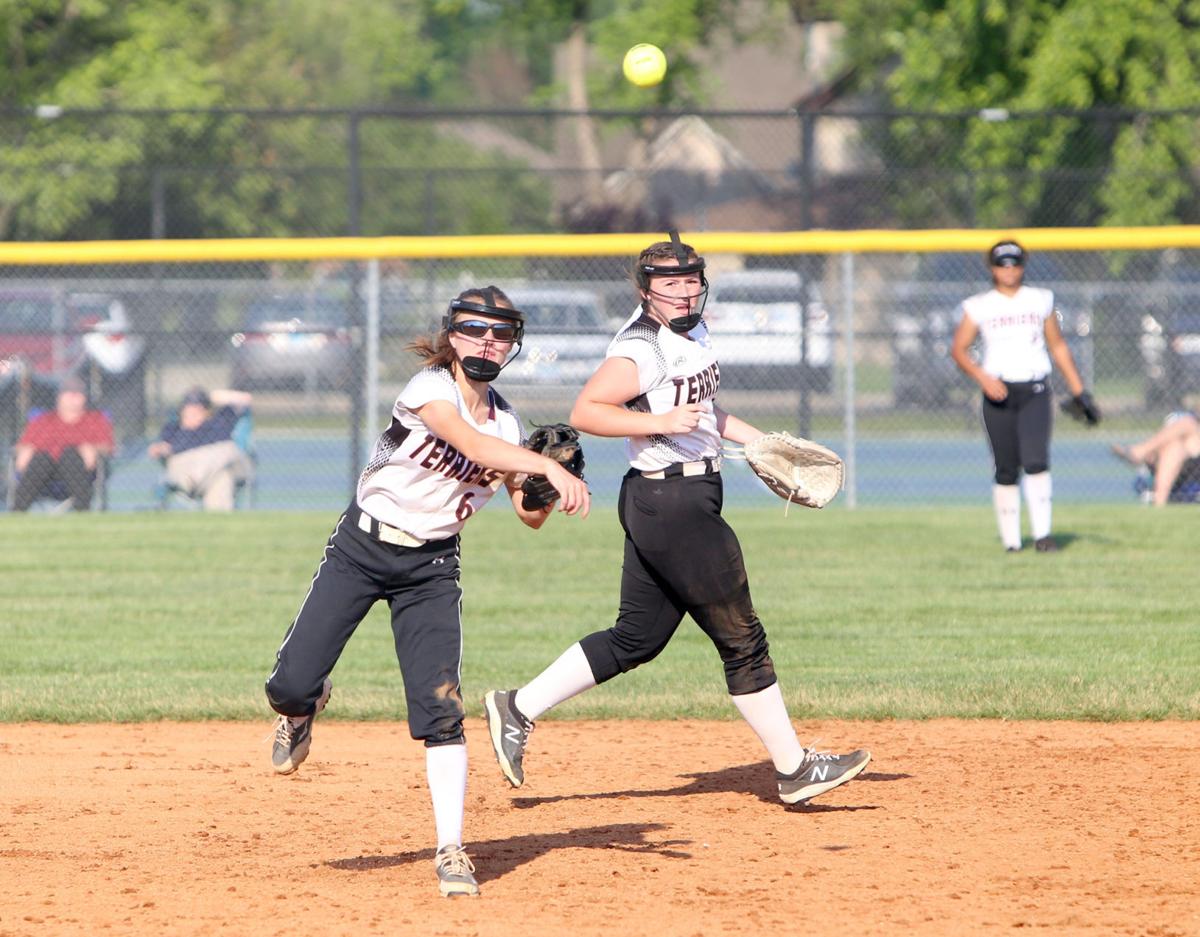 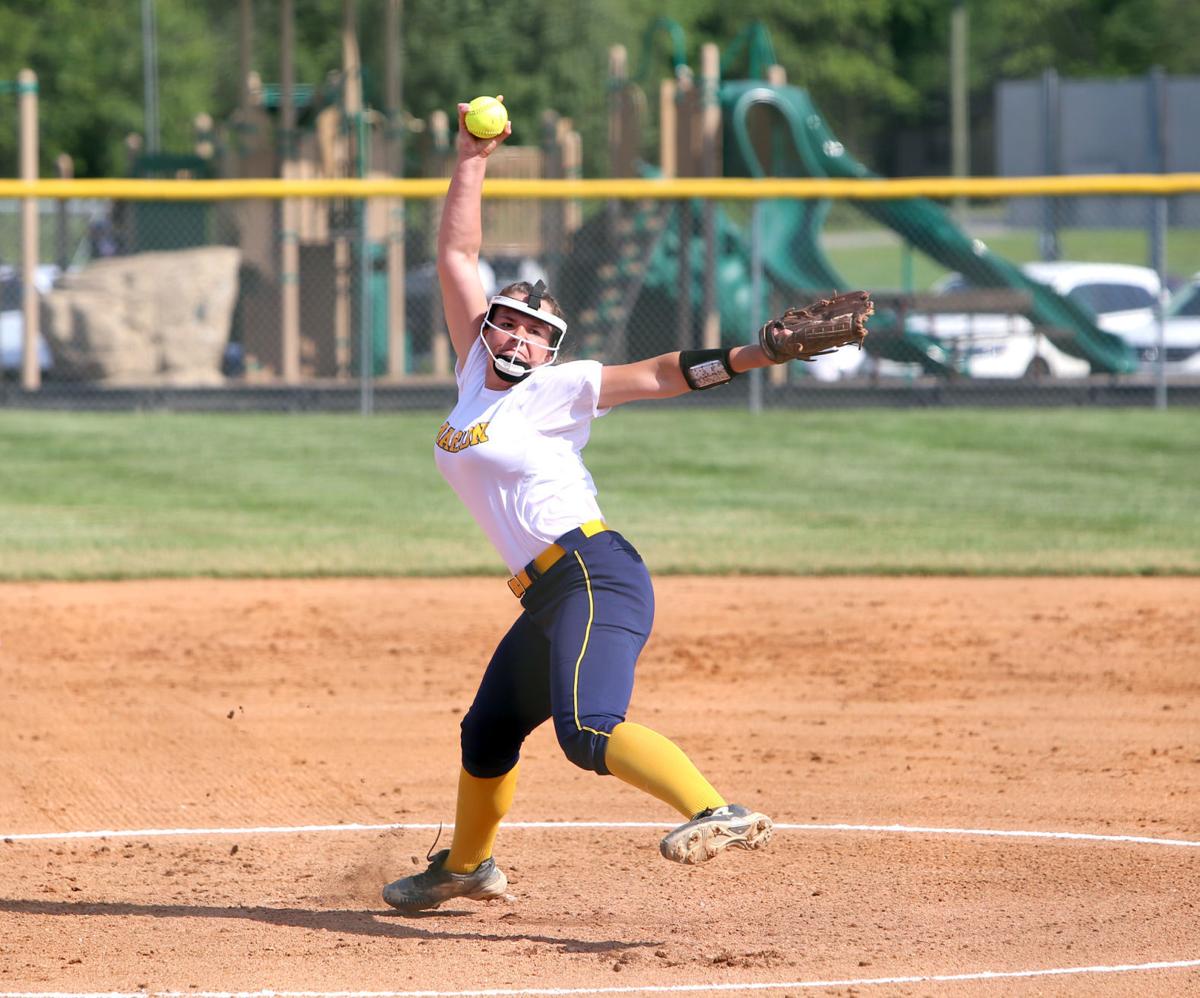 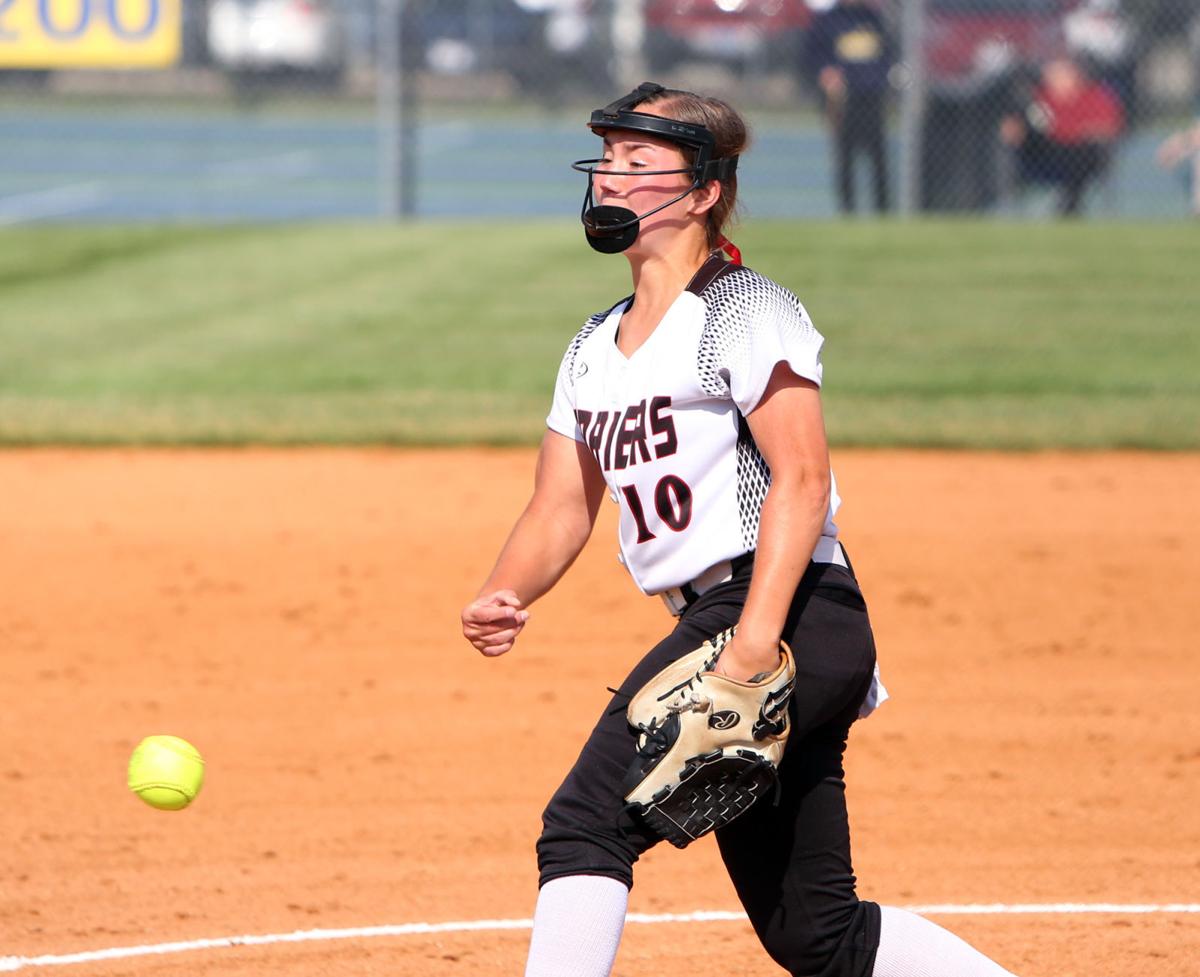 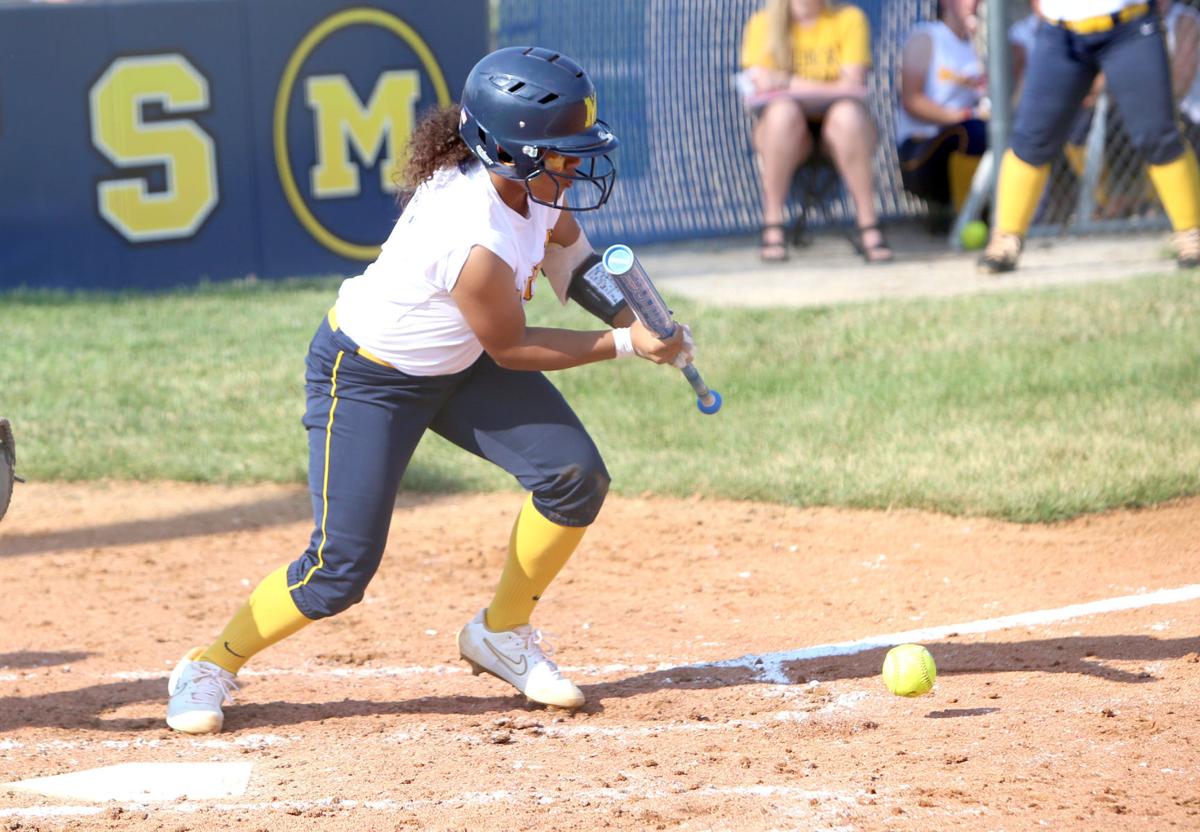 Marion's Heaven Lawrence lays down a sacrifice bunt during Friday's IHSA Class 3A high school regional softball game between Marion and Carbondale at the Crisp Sports Complex in Marion.

MARION — Both the short game and long game were working for the Marion High School softball team Friday as it remained undefeated with a 7-0 victory over Carbondale in a Class 3A regional championship game at the Crisp Sports Complex.

There wasn't a fancy wooden IHSA plaque handed out, but homemade cardboard signs served just fine in the postgame celebration, where it was also announced that Lady Wildcats coach Joy Neal picked up her 200th career victory in her 10th season.

"I can't take credit for the 200," Neal said. "If anything, it's the players' accolade. I mean, they work hard and they buy into the program. It's their choice. So this is just as much an accolade for them as it is for me."

Marion is now 20-0 this season and plays at home Tuesday against Highland in the sectional semifinals. Carbondale finished at 9-8, with three of those losses coming against Marion.

Junior outfielder Karris Rhine was the hitting star for Marion with a three-run homer that landed in a playground beyond right field to provide some breathing room for the Lady Wildcats in the sixth inning. Rhine also drove in a run during Marion's three-run rally in the third and finished 3-for-4 at the plate.

The homer was Rhine's 10th of the season and her fourth in three games against Carbondale this season.

"I'm just seeing it well," Rhine said. "They have good pitching. I don't know. It's rivalry games. I love it."

The rally in the third was started by freshman pitcher Kaitlyn Reuss, who singled for one of her two hits. A sacrifice bunt by Heaven Lawrence gave Marion two outs, but Amelia Browning's double to right gave Marion its first run before Rhine ripped a hit to left to make it 2-0.

Abbi Sherrard kept the line moving by getting hit by a pitch from Carbondale starter Kaitlyn Anders, then Tori Evans singled to push the lead to 3-0. That prompted Terriers coach Kim Wheeler to bring sophomore Kaylyn Grammer in to pitch, a move that led to Jerzy Bittle striking out to end the threat.

"We worked the small game a little bit," Neal said. "Then at the end we used our big game like we normally do."

Grammer recorded five more strikeouts before Browning collected her second RBI hit in the sixth, when Reuss again started the rally with a single. But it was Rhine who put three more runs on the board with a blast to right-center.

"I knew we needed some room because the last inning is always the hardest," Rhine said. "I just got a pitch I could handle and ended up seeing all my fellow teammates and my family at home plate. So it was the best feeling in the world."

Grammer doubled in the top of the seventh, but the Terriers couldn't plate a run against Reuss. The freshman righthander notched her 12th strikeout when she fanned Camryn Miller to end the game.

"We played them better," Wheeler said. "We had a couple of mistakes. My sophomore pitcher that came in, she's got a lot to learn. She did a very, very good job for us, but not having last year, there are some situations that we're growing with this year. Every time she throws she gets a little stronger. So I'm excited for next year."

"The sad part is those five seniors waited a long time to be able to take the field," Wheeler said. "They're great people. They're not just good ballplayers, they're very good people. So I'm proud of them."

The Lady Wildcats, meanwhile, celebrated the continuation of their perfect season and the addition of some postseason hardware, along with their coach's milestone.

"Everybody says we're family, but we actually mean it," Rhine said. "Like, everybody loves each other. We pick each other up when we're down. And it's every time. It's an everyday thing. We show up every day and we get it done."

The ride continues Tuesday with a chance for Neal to add to her win total.

"I'm happy to be here and I feel blessed every day that I get to work with these young ladies," Neal said before making her own emotional speech to her team. "I look forward to every day being with them. They mean a lot to me."

After dropping postseason matches to them in recent years, the Marissa-Coulterville Meteors finally got the monkey off their back by beating top-seed Goreville Tuesday in the semifinals of the Class 1A Goreville Softball Sectional.

Lexi Renner tossed a two-hitter and hit a two-run homer to lead fourth seed Steeleville to a win over top seed Elverado in the Class 1A Regional title game Saturday afternoon.

With a lineup composed of freshmen in the 1-2-3 spots and one of those freshmen also pitching, Carterville defeated Du Quoin to take the Class 2A regional title on Friday.

Freeburg broke open a scoreless pitching duel with a run on a passed ball in the fifth inning and added three more runs in the seventh to beat Nashville to win the Class 2A Softball Sectional title Thursday afternoon.

Nashville capped off a busy week with a 9-5 victory against the host Lady Panthers at Greg Hale Field on Friday.

In the city with a statue of Superman, Cali McCraw played hero with a walkoff single to defeat Murphysboro in extra innings on Thursday.

Prep Softball | Marion gets past Johnston City to remain unbeaten

Jerzy Bittle drove in two runs in the top of the ninth inning to lift the Marion softball team to a 6-4 win over Johnston City and preserve the Lady Wildcats' unblemished record Saturday.

Marion's softball players and coaches pose for a picture after Friday's IHSA Class 3A high school regional softball game between Marion and Carbondale at the Crisp Sports Complex in Marion.

Marion's Karris Rhine hits a three-run homer in the sixth inning during Friday's IHSA Class 3A high school regional softball game between Marion and Carbondale at the Crisp Sports Complex in Marion.

Marion's Heaven Lawrence lays down a sacrifice bunt during Friday's IHSA Class 3A high school regional softball game between Marion and Carbondale at the Crisp Sports Complex in Marion.