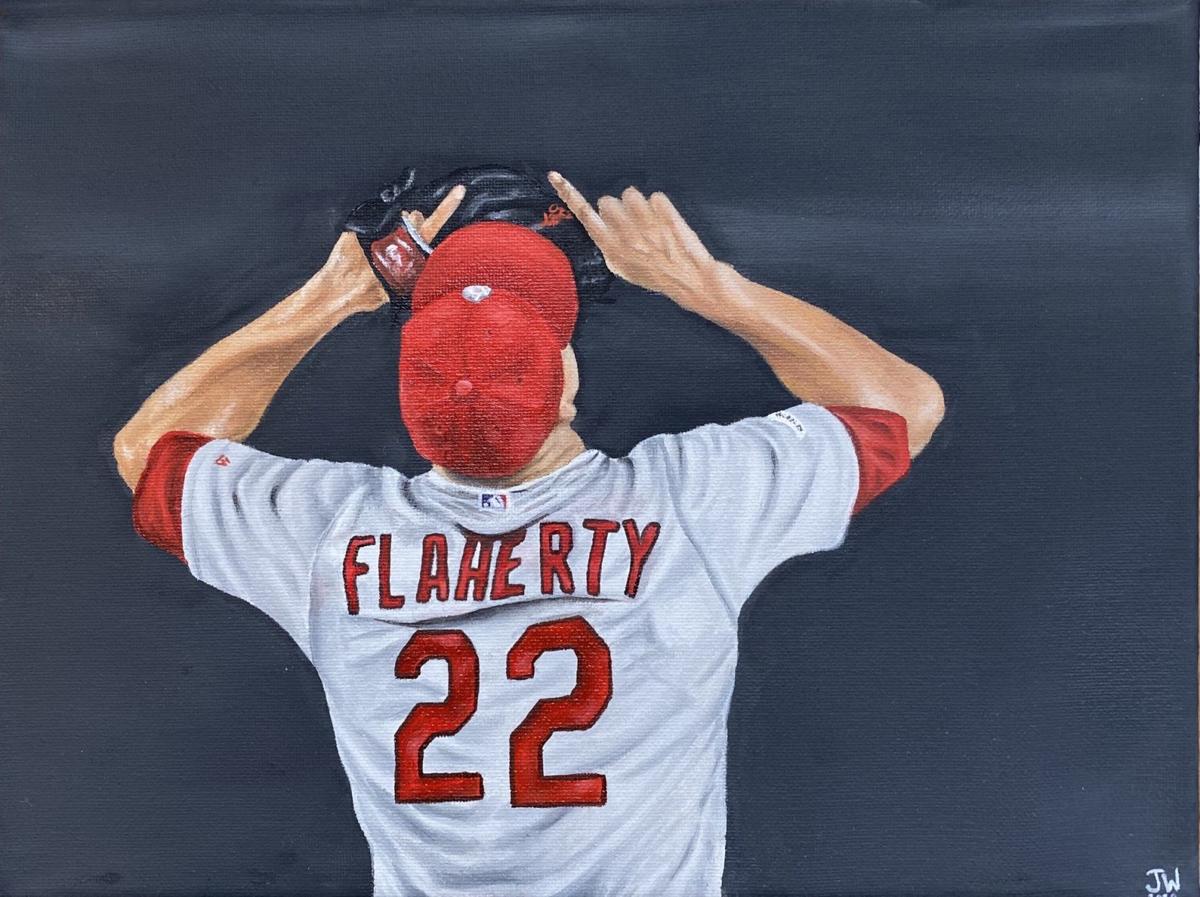 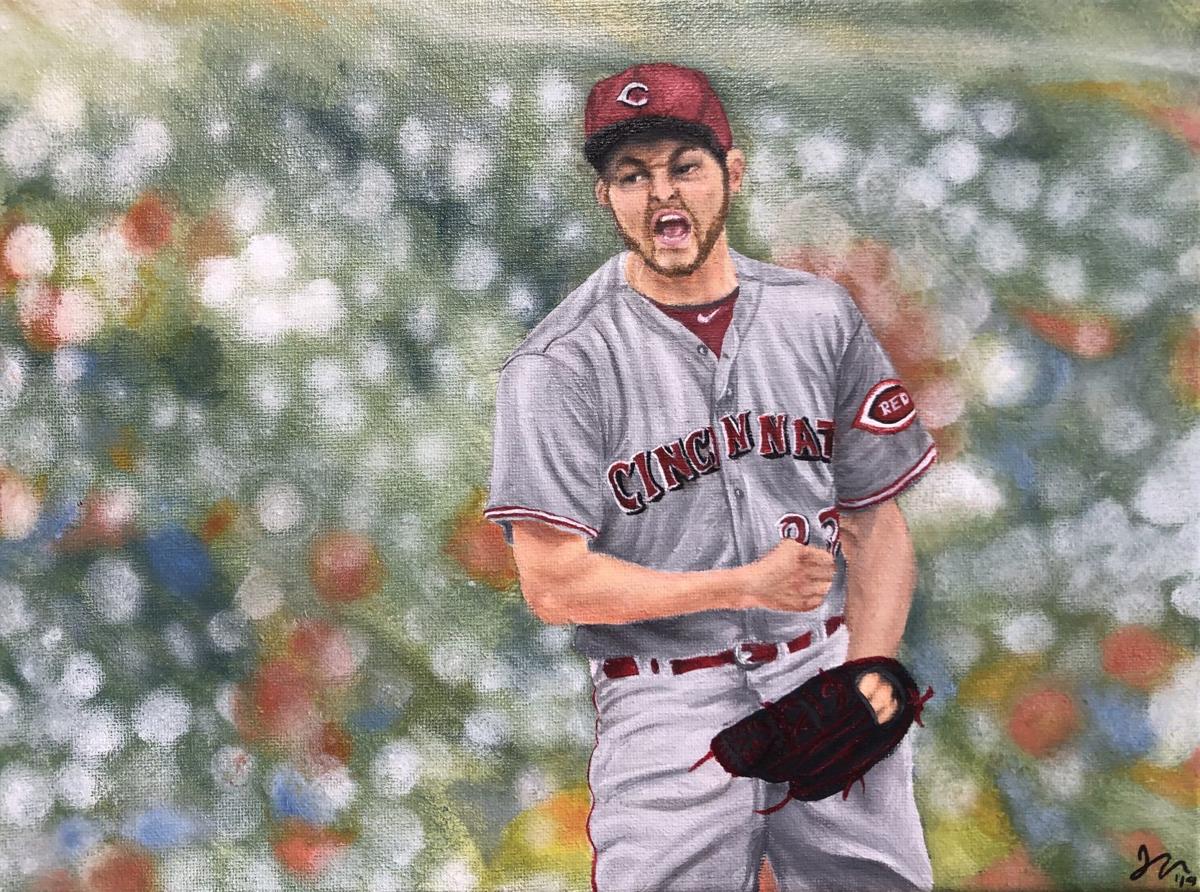 Nashville pitcher Josie Woodrome's oil portrait of Cincinnati Reds pitcher Trevor Bauer is just one of the projects she has finished during the COVID-19 pandemic.

As softball pitchers, Massac County’s Cali McCraw and Nashville’s Josie Woodrome can paint a corner with the best of them.

As painters, they’re just as deft with a brush and a canvas.

McCraw’s glitter-based portrait of rock star Taylor Swift drew raves on Twitter, as did Woodrome’s oil painting of St. Louis Cardinals ace righthander Jack Flaherty. None other than Flaherty himself gave it his seal of approval.

While both star righthanders would have preferred pumping 65 mph risers past outmatched hitters this spring, painting certainly gave them an opportunity to forget the COVID-19 pandemic that wiped out their junior season.

“It was really hard,” Woodrome said. “I was really looking forward to this year for two reasons. I wanted to show that what I did my sophomore year wasn’t a fluke, and that I had improved my exit velocity a lot.

“I was excited to play with this group of girls, and it was hard not to have that. I hated it for the seniors that didn’t get to play their last year. But at least the painting helped because I was able to stay distracted and forget about missing softball.”

Woodrome was inspired to start painting when she was 10. Her mom, Kellie, who’s an art teacher, was a major influence. Once Woodrome figured out that she had some talent, her passion took over.

In fact, the first serious portrait Woodrome painted was in seventh grade. It was a Mother’s Day present for her mom.

“She really liked it,” Woodrome said, laughing. “And I just kept going from there.”

Woodrome painted Cincinnati Reds pitcher Trevor Bauer, but her 9-by-12 portrait of Flaherty went viral in April. Her work on Flaherty was meaningful for multiple reasons. It was something that meant a lot to her, it combined her dual passions of painting and pitching, and she loves Flaherty’s outlook on the game.

That Flaherty took time to tell her she “killed it” on Twitter didn’t hurt, either.

“It was the first time the art was recognized by the person I painted,” Woodrome said. “It’s not just that he liked it on Twitter, but he responded to me.”

All the compliments for her art work aside, Woodrome would have preferred to spend the spring seeing if she could improve on a 14-3 pitching record and a .432 batting average from her sophomore year. Woodrome belted seven homers and knocked in 27 runs, while fanning 159 batters over 110 innings.

Down in Metropolis, McCraw also enjoyed a good sophomore year. The 6-3 righthander posted two wins over Class 3A power Marion, including a 7-6, nine-inning verdict in the first round of the Carbondale Regional.

Sessions with a private pitching coach in the offseason improved her mechanics greatly. McCraw removed a leg slap from her delivery, used her legs more and added even more speed to her pitches. Her height, strength and velocity have earned her interest from Southeastern Conference programs.

But with no softball this spring, McCraw used her second passion to ease the pain. Like Woodrome, she drew on the example of a parent. In this case, it was McCraw’s father.

“He’s really good at art, although you wouldn’t think it since he’s about 6-8,” she said. “He inspired me. The first painting I did was probably in kindergarten.”

McGraw has sold a couple of her efforts, the first one a sculpture she made out of paper during a contest in St. Louis that fetched $100. Another one was a glitter portrait she produced for a company in Metropolis.

But the Swift portrait, which she created in March, was her most meaningful. Not only is McCraw a huge fan — “I can tell you anything about her,” she says — but it was for a class project in which her teacher instructed students to think outside the box.

McCraw heard better news later this week: Starting on Sunday, she can test her cleaner, better delivery in the circle.

“Our travel ball team plays in Eddyville, Kentucky,” she said. “You don’t know how excited I am about that. It’s amazing how easy it is to throw hard when you don’t have to throw as hard.”

Nashville pitcher Josie Woodrome's oil portrait of Cincinnati Reds pitcher Trevor Bauer is just one of the projects she has finished during the COVID-19 pandemic.