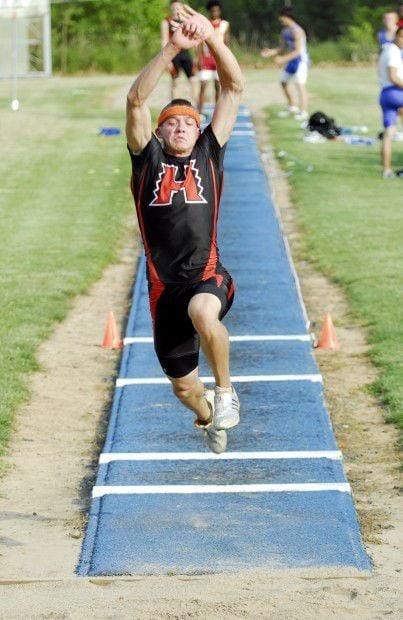 Zack Riley of Herrin makes a 46-foot triple jump attempt on May 13, 2010, at the SIRR boys track meet at Anna-Jonesboro Community High School. 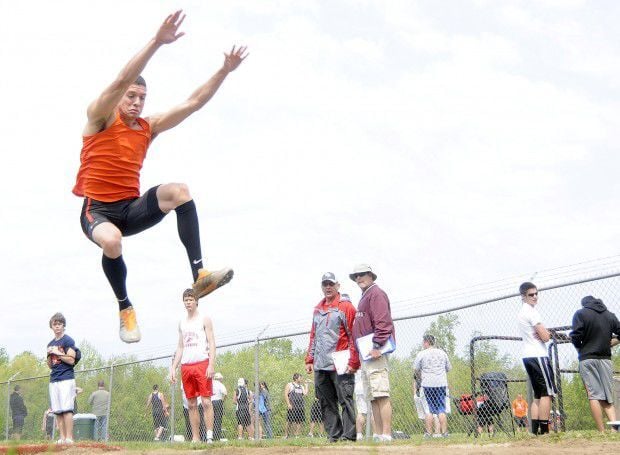 Herrin's Brian Pankey competes in the long jump during the Herrin Track Invitational on April 30, 2011.

It can be said the best friendships that spark in high school push each person to greater heights.

Herrin’s Zack Riley and Brian Pankey’s relationship began in track and field, where together they chased the illustrious career of Eric Thompson. Thompson earned The Southern’s Male Track Athlete of the Year in 2006 and 2007 before capping off his senior year with five state titles in the high jump, long jump, triple jump and also running anchor on Herrin’s 400-meter relay squad.

Riley entered high school one year before Pankey did in 2007 with Thompson’s coach Chad Lakotas still at the helm before Rob Long replaced the highly successful coach for the 2008-09 season. Today, Riley works as a prison guard at the Pinckneyville Correctional Center, but still remembers what first got him interested in the sport.

“Eric Thompson got me into track 100 percent,” he said. “He was a senior when I was a freshman and I remember watching how successful he was when I was in junior high...I idolized him.”

Riley and Pankey both realized they had raw potential during their sophomore seasons. It then came down to getting stronger, polishing techniques and leaning on one another to push for Thompson’s school records.

“(Pankey) was always the guy that no matter what, if you were having a bad day, he was there to push you,” said Riley. “During my freshman year, Eric and those guys won the state title and we both wanted to emulate them, be successful like them.”

Riley went on to tie Thompson’s high jump record at 7 feet, 2 inches — a goal he had chased since entering high school. His accomplishments earned him track scholarships to Rend Lake College before transferring to Kansas State University in 2012.

During his lone season at Rend Lake, he broke both the indoor and outdoor high jump records. Riley later graduated from K-State in 2015 with a Bachelor's Degree in Sociology and now serves as an assistant track coach in Herrin.

“In certain ways, I like interaction with people from a coaching standpoint mainly,” said Riley.

Pankey has followed a similar path in helping others since graduating from Herrin in 2011. After high school, he entered a six-year program at the University of Health Sciences and Pharmacy in St. Louis. Since graduating in 2017, Pankey resides in Marion where he works at Core Pharmacy on West Cherry Street.

The 28-year-old reflected on his former teammate and coach.

“(Zack) and I winning state together in 2010 is a memory I’ll never forget,” he said. “Track got us really close and we bonded year around. I still see him from time-to-time and I actually live about a half-mile from Coach Long, so I see him once a week.”

Pankey finally broke out in his junior year at HHS and shared great success during his time as a Tiger. His senior 4x200 relay team remains a fond memory alongside running mates Demarlo Harris, Wade Rea and Brock McGee, after placing fifth at state in 2011.

As a senior, Pankey was the defending state champion in the triple jump where he was the heavy favorite to repeat. In his final leap he, killed two birds with one stone when he landed 46 feet, six inches to claim the state title and break Thompson’s previous school record. He credited his coach for pushing him during those years.

“Coach Long was an assistant coach in years before us so he already had a lot of experience with the program and carried over that success,” he said. “He pushed Zack and I because he could see our potential.”

Pankey went on to run in college but later decided to chase a degree over a sports scholarship. His decision came on the heels of feeling burnt out, which he admitted was not an easy pill to swallow.

“I was a little burnt out by the end of my senior year which was tough because I had offers from bigger universities,” he admitted. “My ceiling was a little bit lower than Zack's because he had Olympic plans, but I was more realistic with my long term goals.”

Riley qualified for the Olympics back in 2012 before deciding to finish out his college degree.

Together, Riley and Pankey proved records can be broken and that goals can be reached through hard work and determination. All stemming from a friendship that sparked on the track — chasing records and paving the way for others to follow.

Zack Riley of Herrin makes a 46-foot triple jump attempt on May 13, 2010, at the SIRR boys track meet at Anna-Jonesboro Community High School.

Herrin's Brian Pankey competes in the long jump during the Herrin Track Invitational on April 30, 2011.