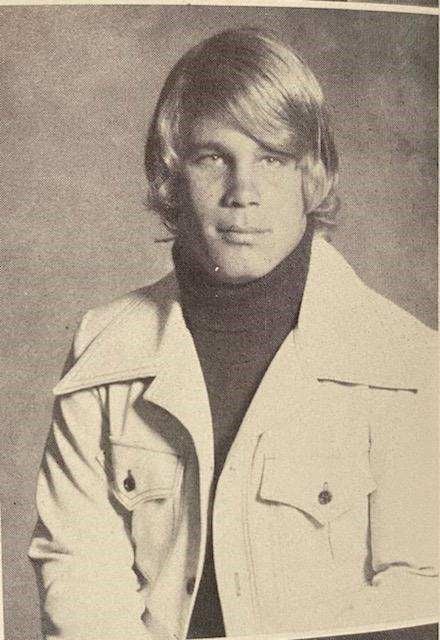 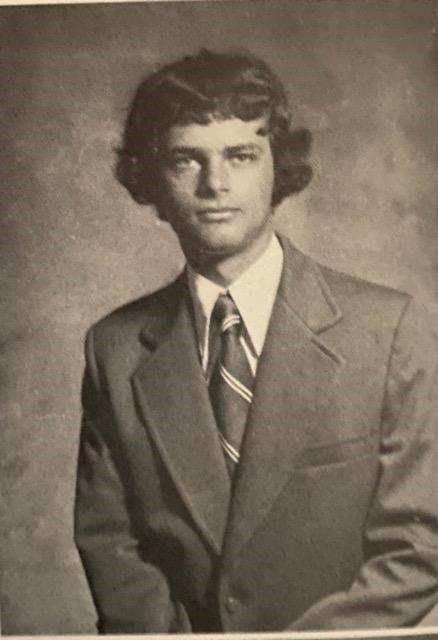 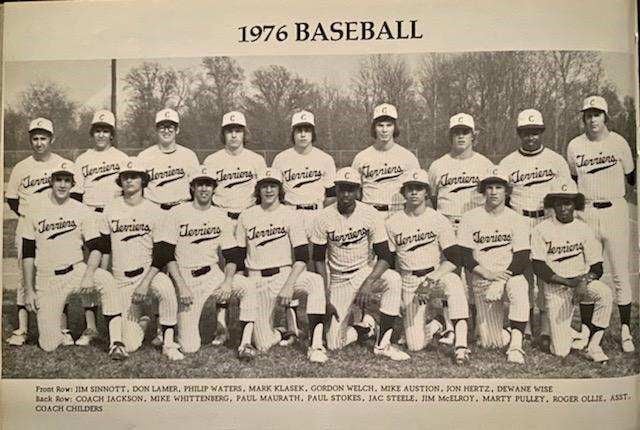 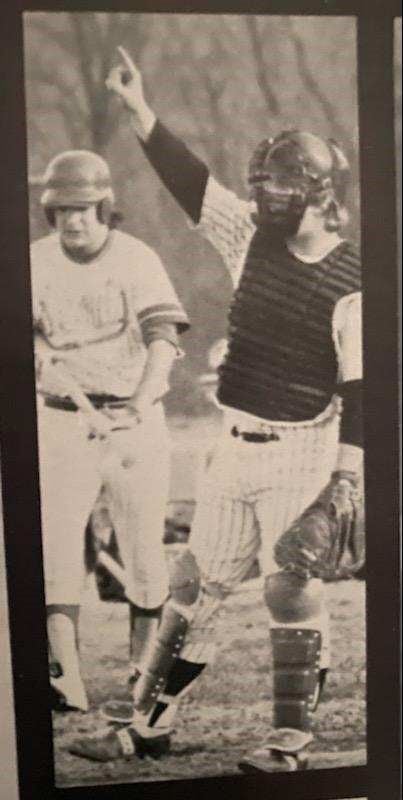 CCHS catcher Marty Pulley signals one out to the defense in game action his senior year. Pulley graduated Eastern Illinois University and played professionally in the Toronto Blue Jays organization. 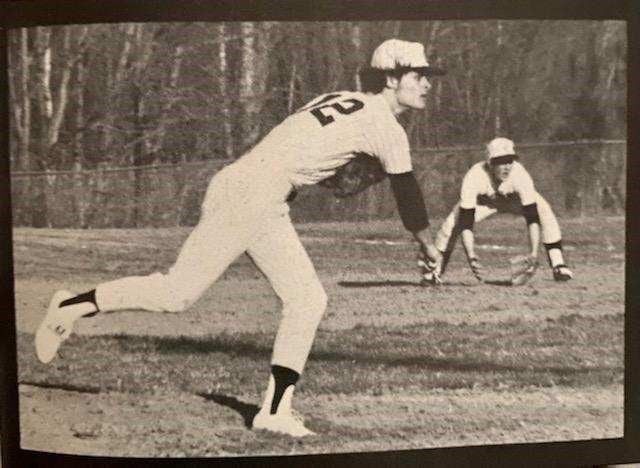 Donnie Lamer is shown following through with a pitch at a home game during his senior year. Lamer was a hard-throwing righthander who played professionally in the St. Louis Cardinals organization after graduating CCHS. 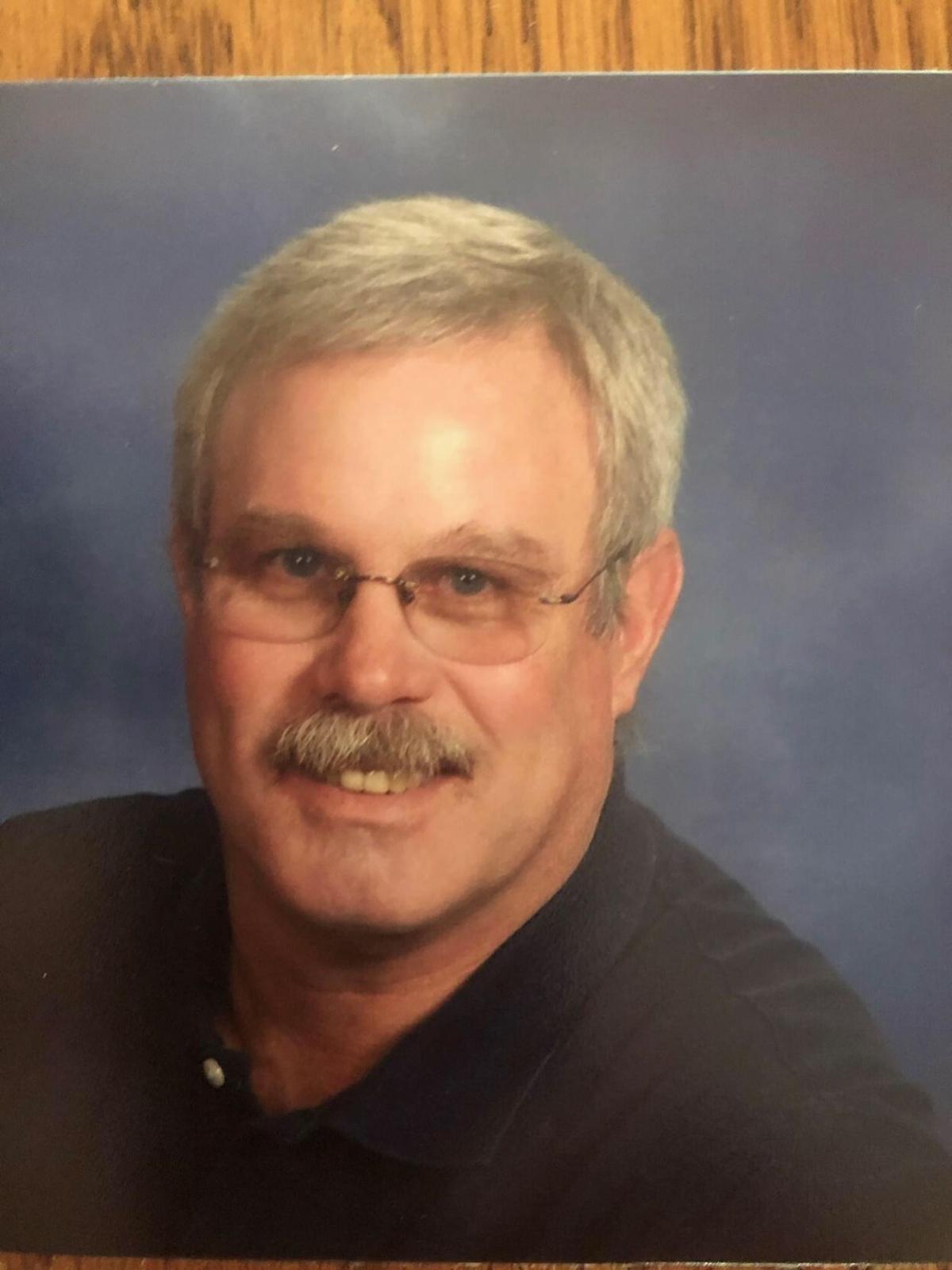 Carbondale Community High School graduate Marty Pulley now resides in Effingham. He retired a  few years ago as a teacher in the Mount Vernon school district.

CARBONDALE — One of the most potent pitcher/catcher combos in Southern Illinois high school baseball history showcased in the mid-1970s in Carbondale.

Lamer was a tall, lanky hard-throwing righthanded pitcher who stood 6-foot-3 and weighed about 180 pounds. He was also a quiet and introverted kid whose fastball was once clocked at 90 mph by a local pro scout.

Pulley, by contrast, stood only 5-foot-8, but was built like a tank at 180 pounds. He played with a tenacity of a linebacker, another position he played well with the football team. Pulley was much louder. He was aggressive, fiery, and a rally-the-troops type of receiver who hit the ball extremely well and was difficult to steal bases against with a rocket for an arm.

How good was this duo?

Good enough that both played professionally after high school — Lamer in the St. Louis Cardinals organization and Pulley in the Toronto Blue Jays organization.

"Donnie could really bring it," said Jackson, who long ago retired as CCHS coach. "He also had a decent over-the-top curve and change up that he could throw. It was his fastball, though, that made him the pitcher that he was and got him so many of his strikeouts. At the time, he was the hardest-throwing pitcher I had ever coached or seen in this area."

Because of outings like this, Lamer was offered and signed a pro contract with the Cardinals the summer after he graduated high school. Virgil Melvin, a veteran scout from Herrin, did the honors.

Lamer pitched three seasons for the Cards' rookie and Class A league affiliates, finishing with a 13-14 overall career record, five complete games and three shutouts. His combined earned run average was 3.80. He was 8-8 in 1978 before an injury sidelined him.

The news was difficult for his former teammates and coaches to absorb.

"Donnie passed away far too young," Jackson said. "I felt so badly for him and his family. I will always remember how special a player and person he was."

Jackson described Pulley as "one of the hardest workers" he ever coached.

"I had a lot of good catchers in my coaching days, but Marty had to be one of the best, if not the best. He was simply an outstanding defensive catcher with a strong throwing arm. He had such a quick release because he was quick with his feet and was also so good at blocking balls in the dirt. He would ask me to work with him on that all the time after practice. He wanted to be the best."

Jackson added that Pulley was more than a defensive stalwart.

"He could hit for both average and power. He's the guy we wanted to have at the plate when the game was on the line."

One of Lamer and Pulley's teammates was centerfielder Mike Austin.

"Donnie was so talented. It was amazing just to watch him pitch. He wasn't a very loud kind of guy," Austin said. "He let his actions on the field show the kind of player that he was. Above all else, he wanted to win. And anytime that he was on the mound, we knew that we had a really good chance of winning. Not a lot of people could hit him. I also remember he was a huge St. Louis Blues fan. He was just a heck of a guy."

"Marty could do anything — football, basketball, baseball. He was an athlete and one of my better friends. In baseball, he was such a good hitter and so good defensively. As good as Donnie was on the mound, Marty was every bit as good behind the plate. He made the rest of us work harder to keep up with him. Just an extremely talented ballplayer."

Another teammate was Paul Stokes, who played left field for the Terriers.

"Donnie was a pretty private guy. He was hard to get to know," Stokes said. "What I do know is that I'm glad that he was on my team. His was unbelievably fast. I couldn't hit him. I could hardly see the ball. I could only hear it go by."

Stokes said he recalls one game in which the opposition was so fearful of facing Lamer that the team forfeited not long after the game had started.

"That's how hard he threw," Stokes said. "He was scary good."

As for Pulley, Stokes remarked that there was nobody tougher on the team.

"Marty was so quick behind the plate. It was never a good idea to run on him. And he would pick you off base, too, if you weren't careful. If he had a bigger frame, I think he would have played in the Majors."

Paul Maurath, who now resides in Cincinnati, was another Terriers teammate.

"Marty was the starting catcher my junior year and I was his backup," Maurath said. "He was muscular, powerful and on the other end of the personality spectrum from Donnie," Maurath said. "You always knew where Marty was. You could hear him. But he was quite an athlete.

"Donnie was more of a baseball specialist. He was an outstanding baseball player in all facets of the game. He was also one of the quietest players I ever played with, as well."

Longtime John A. Logan College baseball coach and now retired, Jerry Halstead, was a year younger and played his baseball at Carterville High School, but was a teammate of Lamer and Pulley in American Legion baseball during the summers.

"Marty was as good a catcher as I ever pitched to at any level," said Halstead, who also pitched for SIU. "He kind of made us go. He had a motor that wouldn't quit. He had a lot of bounce and it was infectious. It would be 90 degrees outside and he would be bouncing all around before the game and got us ready to go. Marty had a good arm, could hit and run. He loved to play the game — a very solid player."

Halstead also had much praise for Lamer.

"Donnie was very quiet until he picked the ball up. He had a 90 mph fastball and came right at the batters. What a lot of people don't know is how good a hitter he was. He swung a power bat. When he got hot, he could carry a team. But his hitting was always overshadowed by his pitching."

Halstead added that he played three years of Legion baseball with Lamer and Pulley.

Pulley said he remembers Coach Jackson promoting him to the varsity his freshman year.

"He put me in the lineup and left me in the rest of the season. He gave me the opportunity and I can't thank him enough for that."

Pulley added that Jackson "was a positive influence and very important in his life" after his father passed away when he was in the seventh grade.

"Coach Jackson, along with my football coach, Tom O'Boyle, kept me on the straight and narrow path."

When reflecting upon his prep playing days, Pulley said he remembers the Terriers having some pretty good battles with Centralia, which was led by eventual Major Leaguer, Gary Gaetti. He also remembers playing a game at Williams Field in Carbondale in the snow.

"What stands out in my mind is how hard Donnie threw at such a young age. He threw harder than anybody else in the area by far. His pitching motion was so effortless and he had very good control," Pulley said. "He didn't have a great curve, but I don't think his dad wanted him to throw the curve that much anyway. He could throw a change up, though.

"Donnie had a great pickoff move, too. He was very quick with it. You couldn't get off base very far, or he would pick you off."

Pulley began his post-CCHS baseball career in the Cape Cod league, the summer before his first year in college. He made the All-Star team there and got to play a game at Fenway Park in Boston. He accepted a scholarship from Chipola Junior College in Florida and then transferred to Eastern Illinois University.

Pulley was drafted by the Blue Jays in the 10th round of the 1981 Major League Baseball draft and proceeded to play two seasons with the organization, advancing as high as Class AA Knoxville.

He attended one spring training with the Blue Jays and recalls a game against the Phillies in which he banged out three hits and drove in four runs.

"I can't remember who won that game, but I do remember that Pete Rose and Garry Maddux were allowed to bat every inning."

Retiring from professional baseball after the 1982 season, Pulley worked a factory job for nine years before accepting a teaching position at Rome Elementary School in Dix and then later at Casey Middle School in Mount Vernon, where he retired after 27 years as an educator in 2017.

Earlier this summer, Pulley lost his longtime wife, Paula, to illness. The couple raised two children — Eric and Amy — and have two grandchildren.

Watch now: Bears get more than they bargained for at receiver

Was the Brewers-White Sox series a preview of the 2021 World Series?

Was the Brewers-White Sox series a preview of the 2021 World Series?

CCHS catcher Marty Pulley signals one out to the defense in game action his senior year. Pulley graduated Eastern Illinois University and played professionally in the Toronto Blue Jays organization.

Donnie Lamer is shown following through with a pitch at a home game during his senior year. Lamer was a hard-throwing righthander who played professionally in the St. Louis Cardinals organization after graduating CCHS.

Carbondale Community High School graduate Marty Pulley now resides in Effingham. He retired a  few years ago as a teacher in the Mount Vernon school district.