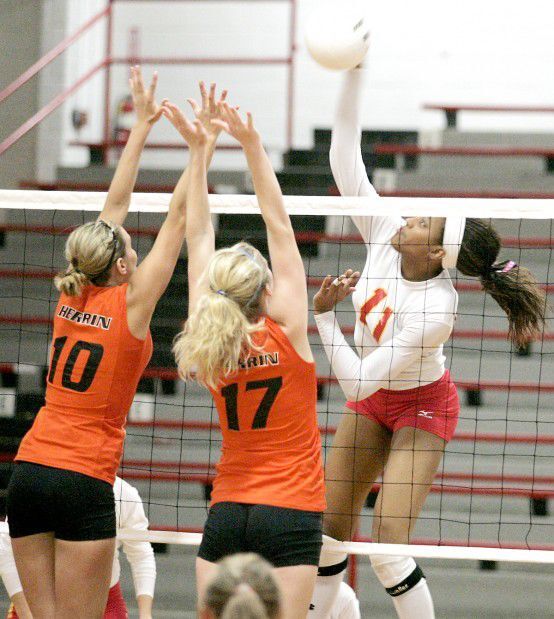 Murphysboro's Jessica Whitehead hits the ball over Herrin blockers during the Du Quoin regional championship match against the Herrin Tigers on Oct. 31, 2009, in Du Quoin. 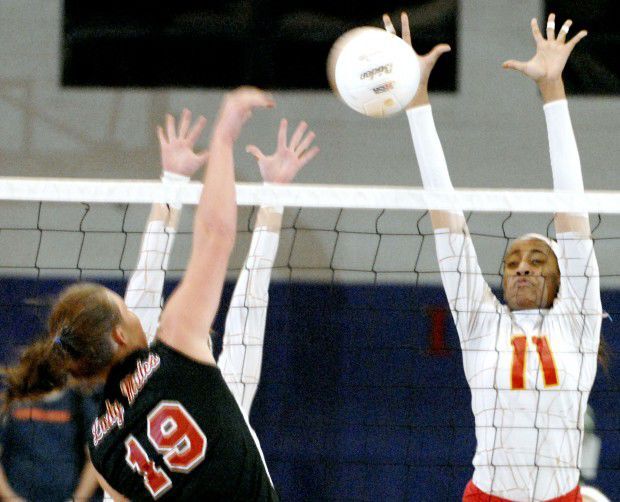 Murphysboro's Jessica Whitehead blocks the shot of Fairfield's Felicia Johnson during the Red Devils' 2-0 Sectional Championship win over the Lady Mules on Nov. 5, 2009, in Harrisburg. 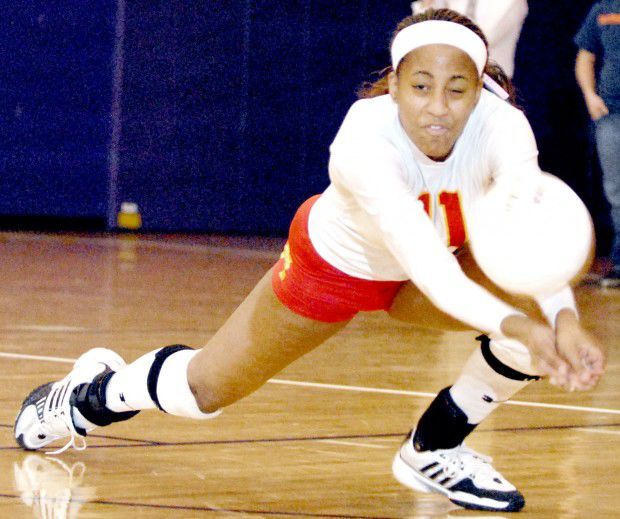 Murphysboro's Jessica Whitehead dives to save a Fairfield attack during the Red Devils' 2-0 Sectional Championship win over the Lady Mules on Nov. 5, 2009, in Harrisburg.

Jessica Whitehead had her heart set on being a star.

Just not in the sport where she became one.

“I played basketball for a long time,” she said. “I went to coach (Pat) Summitt’s basketball camps.”

But instead of going from Murphysboro to Knoxville and playing for the iconic women’s basketball coach that won eight national championships, Whitehead became one of the greatest volleyball players in Southern Illinois history.

The Southern Illinoisan Player of the Year in 2008-09, Whitehead holds the Red Devils’ single-season records for kills and blocks, as well as the all-time career mark for blocks. She finished second to Katherine DeWulf in kills for a career, largely because she played only three varsity seasons to DeWulf’s four.

That was because Whitehead didn’t even take up volleyball until eighth grade. But as soon as he saw her gait, Murphysboro coach Mike Layne knew what he had.

“She was somewhat of a volleyball freak,” he said. “All legs, all arms, extraordinarily big hands. But quite frankly, it took a lot of coaxing to get her to come out.”

Layne’s powers of persuasion are legendary. Whitehead finally agreed to play, and in time, her physical abilities and Layne’s teaching molded a superstar.

It took time. Whitehead played on the JV as a ninth grader. As a sophomore, still raw, she set the school record for blocks in a season with 149. A offseason of club volleyball refined her talents. Coaches started game-planning for her, albeit without much success.

“I coached 20 years in Southern Illinois and there was not a more dominant hitter in the deep south than Jessica,” said former Benton coach Tony Phelps. “We’d try to double and triple-team her, but she could jump so high that you couldn’t block her.”

By her junior and senior seasons, Whitehead hit with such force that she could test the courage of even the most stout-hearted defender. Phelps even felt compelled to issue his back row players warnings just before Murphysboro matches.

“You’d tell the back row kids that you might get a bloody nose,” he said. “She hit it so hard that you didn’t want a kid to get hit in the teeth.”

Whitehead notched 516 kills and 212 blocks as a senior, marks that have stood in the school record books for 11 years and counting. The Red Devils went 34-4, winning their only sectional title and sailing through SIRR Ohio with an unbeaten record.

Over a decade later, as he looks back on her career, Layne assesses Whitehead as a “game-changer.” Now the coach at Pinckneyville, Layne rates Whitehead as in the top 1 percent of his players at Murphysboro.

“She was the first to practice and the last to leave,” he said. “She was a humble servant.”

Whitehead went on to play at SIU and became a club volleyball coach while still in college. She helps run the Southern Illinois Volleyball Academy and is also an assistant coach for John A. Logan’s program.

That came after a couple of years assisting Layne at Murphysboro Middle School. In 2018, the duo led the Blue Devils to an SIJHSAA championship.

Not a bad return on an investment initially made with reluctance.

“Volleyball is fun because it’s family,” Whitehead said. “In my senior class, and other classes, you got to meet new and amazing people. It took a lot to learn the game, but I learned it quick. I love it. It turned out to be my sport.”

Murphysboro's Jessica Whitehead hits the ball over Herrin blockers during the Du Quoin regional championship match against the Herrin Tigers on Oct. 31, 2009, in Du Quoin.

Murphysboro's Jessica Whitehead blocks the shot of Fairfield's Felicia Johnson during the Red Devils' 2-0 Sectional Championship win over the Lady Mules on Nov. 5, 2009, in Harrisburg.

Murphysboro's Jessica Whitehead dives to save a Fairfield attack during the Red Devils' 2-0 Sectional Championship win over the Lady Mules on Nov. 5, 2009, in Harrisburg.