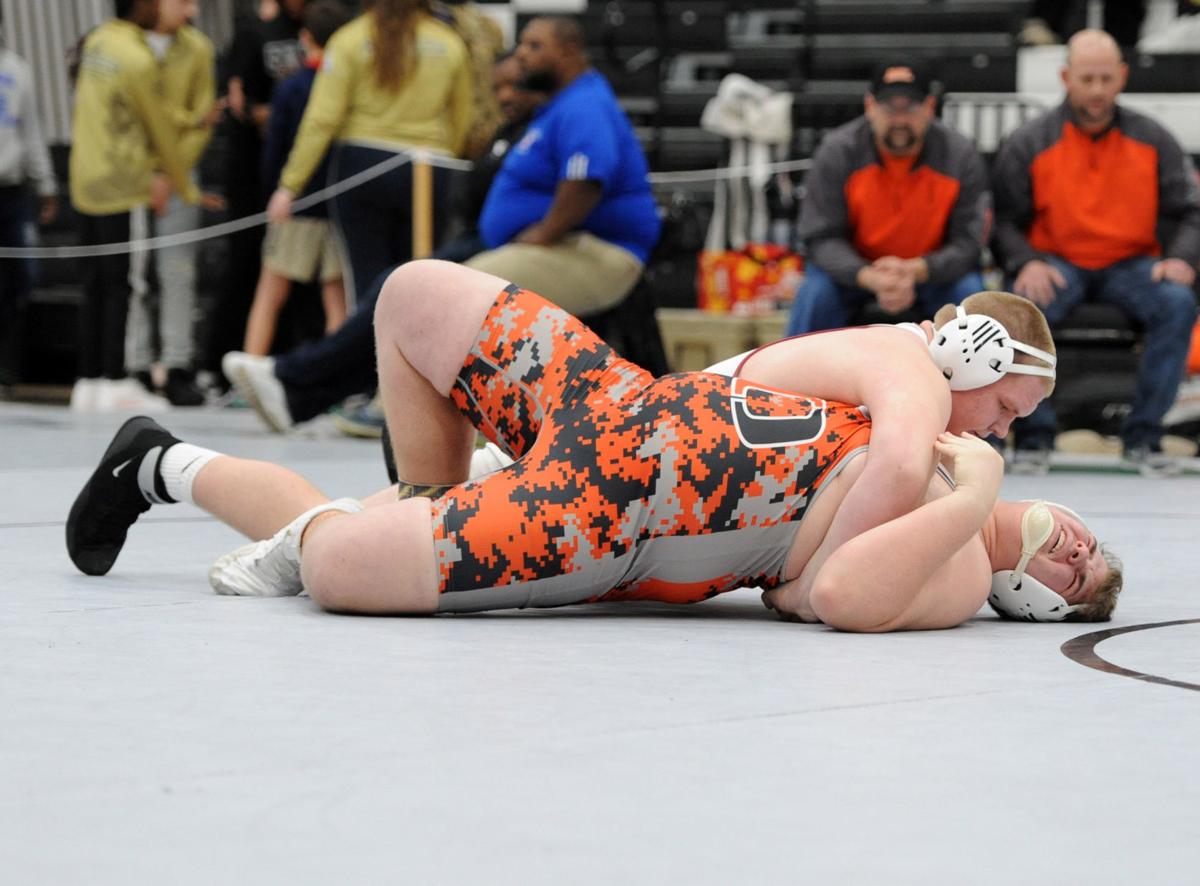 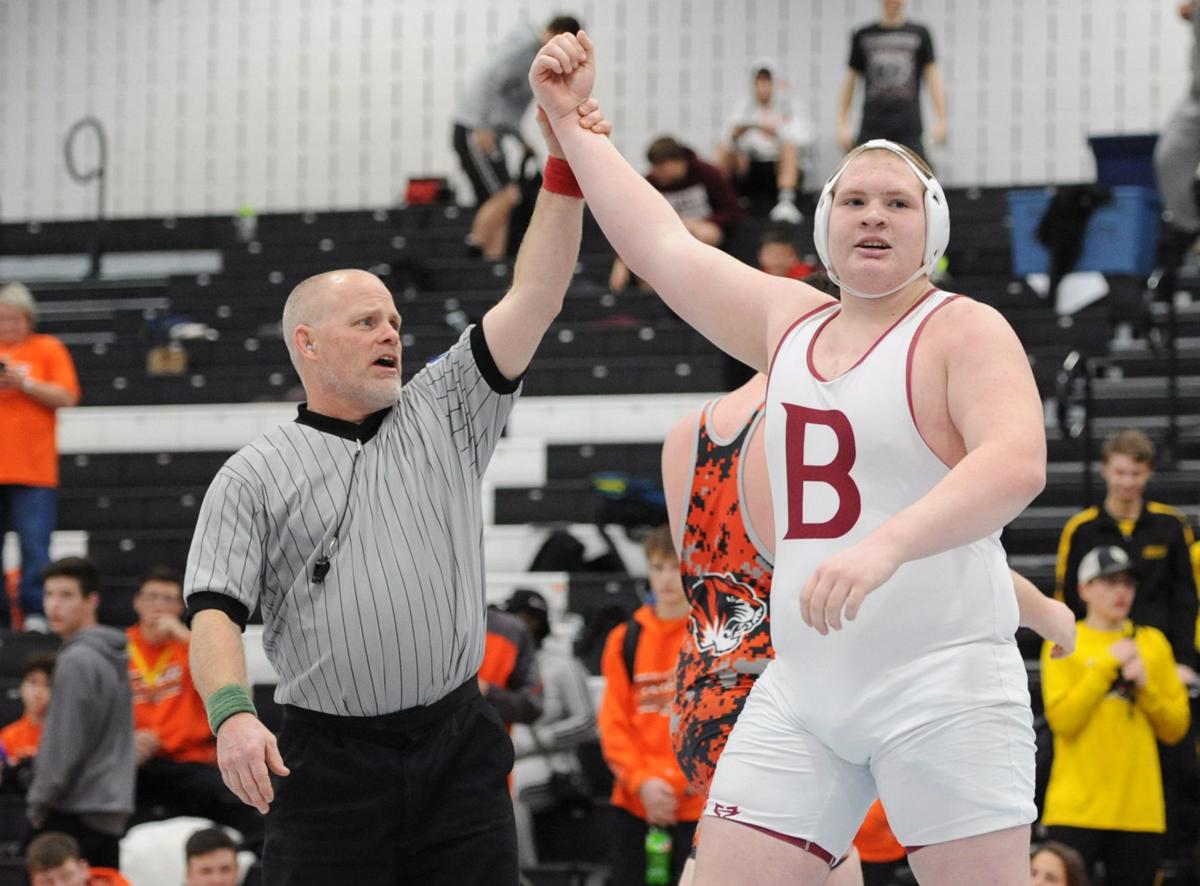 Benton's Gabe Craig has his hand raised by the referee after pinning Olney's Skyler Sutton during the 285-pound championship match in the 58th Annual Murdale Wrestling Tournament held last season in Carbondale.

BENTON — Benton wrestler junior Gabe Craig has come a long way in two short years, from not finishing his freshman season to being on the verge of becoming one of the best wrestlers in a program that’s had one state champion, seven state placers, 18 state qualifiers and six wrestlers with more than 100 career wins to its credit.

“I qualified for state last year and liked how it felt,” Craig said. “So I took a lot of time in the summer working out hard on my shots, my offense, and this season has been great.”

Craig begins this week’s Carterville 1A regional two wins away from breaking the record for individual wins in a season. If he wins his second straight regional title, he will become only the second Ranger wrestler to finish a season undefeated and to win an individual state title, joining his assistant coach Zach Wilson, who won the 140 lbs. weight class title in 2008.

“I didn’t really think about the wins record at the start, but sometime during the season I started thinking I have a real shot at this, so it became a goal of mine,” Craig said. “However, I gave a lot of thought to being undefeated. I put a lot of faith in my training and coaches, so I can go out and hope for the best.”

Craig, who wrestles at heavyweight, finished the regular season with a 44-0 record with 37 pins and seven forfeits and only one match going to the third period. Along the way, Craig won the Civic Memorial and Tolono Unity tournaments and successfully defended his Murdale Tournament title.

“I’m just doing what coaches tell me and it’s been working all season, so I’m grateful to have this record,” Craig said. “We try a lot of different offense, but my main move is probably a body lock. However, last week I was working on using the double leg takedown, and I like it. Heavyweights don’t really try shots, so if it continues to work out, I will be doing more double legs.”

Friday, on the first day of the regional, Craig has the chance to set a new season record, which is currently held by four-time state qualifier Oliver Davis, who set the standard in 2016 with a 45-4 record.

Craig has wrestled at the heavyweight weight class his entire high school career. After finishing sixth at the Murdale Tournament as a freshman, his season was shut down because of an injury with a 12-9 record.

Last year as a sophomore, Craig was injury free and came back to win the Murdale Tournament. He then won the regional title in dominating form, winning his first two matches by pins with the same time of 1:08 and the title match by an 8-5 decision.

At the sectional after a bye, Craig won his first match by a pin of 1:11 before losing in the semifinals to the sectional champion by a pin in 3:32. He advanced to the third place match with a pin in 50 seconds and then lost the match by a 9-4 decision, qualifying for the state tournament as the team’s only representative.

In less than three seasons, Craig is knocking on the door of 100 wins with a career record of 94-19. His teammate junior Peyton Swigonski also has 94 wins (94-24) going into the regional.

While Craig may be the top wrestler for the Rangers, he, Swigonski and their teammates have also had a history-setting season.

Last week the Rangers beat Harrisburg and West Frankfort to win back-to-back SIRR Ohio Division titles for the first time in program history and to finish the regular season with a 20-4 record, breaking the season record of 18 wins set by the 2008-09 team on which coach Aaron Robinson was a member.

The Rangers also have a chance to become the third team in school history to win a regional team title, joining that 2008-09 team that also qualified for the state team tournament and the 2010-11 team.

“Going into the regional, we are just focused on our team as a whole and trying to get as many bonus points as possible,” Robinson said. “I knew we had a chance (for 20 wins and the title), but sometimes you never know. I think some of the momentum carried over from our good Murdale Tournament. That was our big stepping stone, and we’ve just been building from there.”

In the two seasons since Darren Lindsey took over the Marion wrestling program, the Wildcats have shattered the single-season dual meet wins record, won the South Seven Conference, and produced the program's single-season wins leader.

Benton's Gabe Craig has his hand raised by the referee after pinning Olney's Skyler Sutton during the 285-pound championship match in the 58th Annual Murdale Wrestling Tournament held last season in Carbondale.