Become a Member
Read Today's E-edition
Share This
Blues' Stillman: 'Joy and relief that we're back at it'
0 Comments
Share this
1 of 2 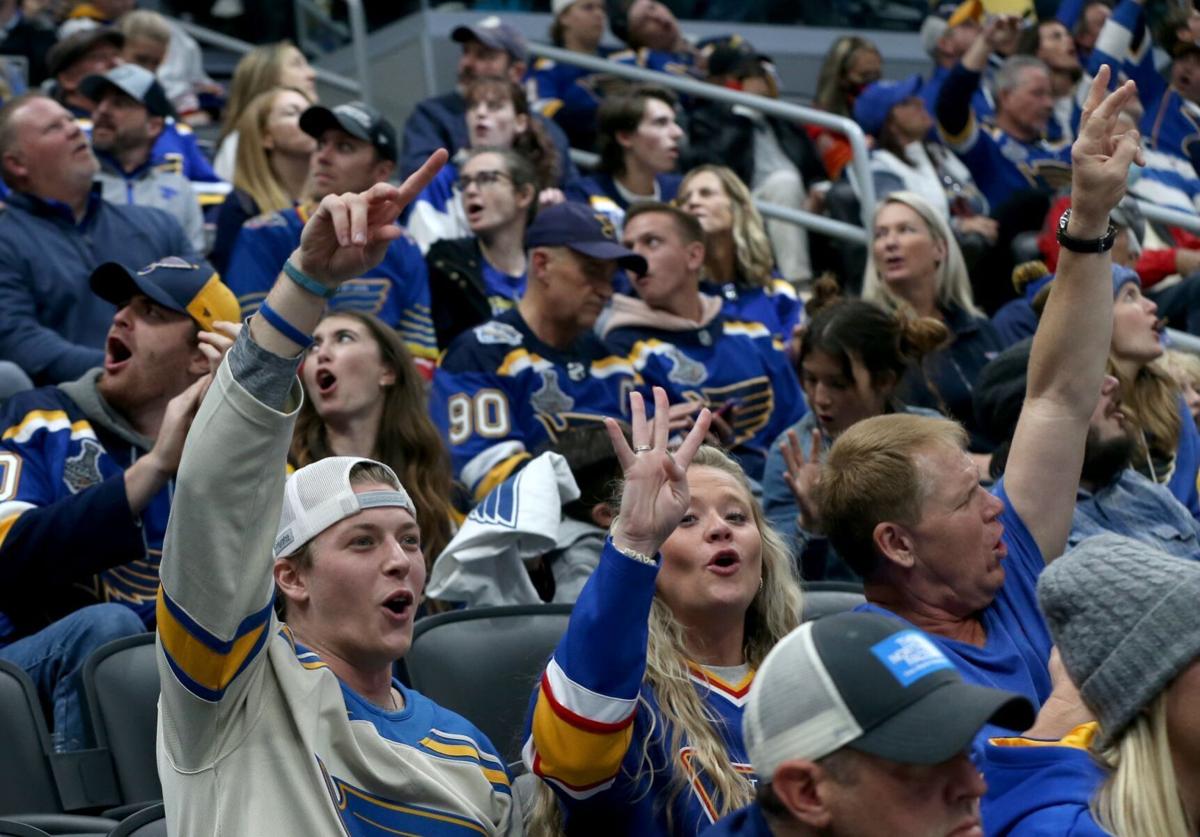 Fans count out to four after Blues left winger Jake Neighbours scored the team's fourth goal, in the second period of the team's home opener Saturday night against the Los Angeles Kings. 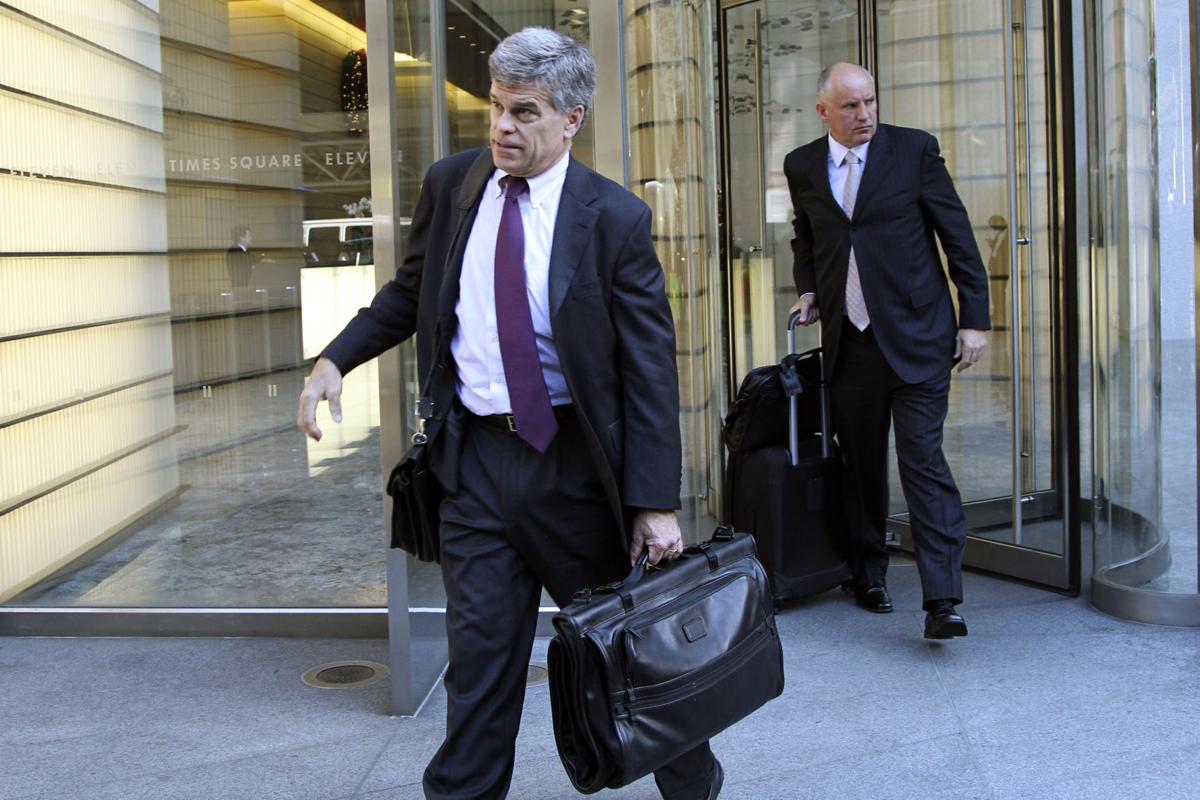 Normally, Blues chairman Tom Stillman would have poked his head into the team’s dressing room after the home opener on Saturday to congratulate Jake Neighbours on his first NHL goal, but right now Stillman still is keeping his distance.

Of course, had Stillman done that, first he would have had to introduce himself to Neighbours, the team’s first pick in the 2020 draft, because more than a year later, they have yet to meet in person.

Neighbours isn’t the only one. The Blues signed Kyle Clifford as a free agent in October of 2020 and Stillman didn’t meet him until they were at a charity golf tournament just before the start of training camp.

“I still have not met Torey Krug in person,” said Stillman, starting his 10th season as the owner. “I had a couple phone calls with him after we first signed him but we couldn’t get together and I didn’t run into him at Centene at training camp for some reason. I have not met him live. It’s strange. It’s odd.”

After a tragic 19 months brought on by the COVID pandemic, one of the first signs for the Blues of a return to normal came Saturday night when they had their first sellout crowd since March 9, 2020. For the Blues, everything is not totally back to normal. Proof of vaccination or a negative COVID test is required for admission to games. Players and those around the team still are being tested regularly. But a crowd of 18,096 at Enterprise Center on Saturday said maybe normal could happen.

“Sort of celebratory, I would say,” Stillman said of the atmosphere in his box for the home opener. “People so happy to be back at the start of the season, with a full house, a very loud arena. Being able to look ahead and think that we’re going to have some sense of normalcy and the usual progression of an exciting season.”

Usual progression has not happened in the previous two seasons. The 2019-20 season was abruptly stopped in March and didn’t restart until August. The 2020-21 season didn’t start until January 2021 and ended in July. The 2021-22 season so far seems to be progressing relatively normally.

“I think back to March of 2020,” Stillman said, “when suddenly the season was suspended. That was the word used at the time, and we thought, ‘Oh, this is terrible, we’re not going to play for a few weeks or a month or something. And it just went on and on and on. The uncertainty of it, the starkness of the bubble (in Edmonton), the empty arena when we started back at home. That’s tough on the fans, tough on the players and the coaches, sucks the energy out of an arena, and it’s tough on the organization financially.

"It’s been a long, tough period like that for all concerned. Suddenly to be starting a season with a full house, there’s a sudden rejuvenation of Blues world. I hope that kind of helps push that feeling for our life in general in St. Louis, it’s time to get out and be more active. Things are opening up. There’s kind of a combination of joy and relief that we’re back at it.”

There were times, in those early months after everything stopped, when Stillman wondered if the season would ever be completed, or if the next season would start. NHL Commissioner Gary Bettman and his staff grappled with the constantly changing issues to restart the season, while in St. Louis, Chris Zimmerman and Doug Armstrong, the Blues’ presidents on the business and hockey sides, respectively, were doing the same.

Bettman said when the 2020-21 season began in January that the losses for the league would be in the billions, and for a small-market team like the Blues, their share of that was going to be tough. Even in their best seasons, the Blues never have made a lot of money, and for much of their history, they probably have lost money. Stillman and his ownership group have been able to put the team on more solid financial footing, acquiring 100% of the team shortly after the Stanley Cup win in 2019. That the Blues won the Stanley Cup, leading to a surge in season ticket sales (and a waiting list for the first time) and other revenues couldn’t have come at a better time.

“It was tough (financially)," Stillman said. "I’m not going to get any more specific than that. Certainly we had a lot more money going out than we had coming in. Because of that we had to take on some debt that we would have preferred not to take on. We have to pay down that debt and that will affect us for a while, but we had gotten ourselves into a much more financially viable position over the years since we took over and that allowed us to withstand the pandemic and financial ramifications of it. Now going forward, we’ll be OK.

“Even before we won the Cup, we had done a lot of work to restructure our business, build our revenue base, control our costs, and then the success on the ice certainly helps boost new revenue, especially the Cup season, but before that as well. It gave us a stronger foundation when we did go into the troubled times of the pandemic years."

Despite all the financial losses, the Blues still chose to spend to the salary cap this season.

“I can’t say it never occurred to me,” he said, “but in the end, my view is, if we do (have a smaller payroll), we’re going to drop competitively, we’re going to lose good players and then it’s hard to get that back. You don’t just go out to Schnucks and pick up a good player. You’ve affected your team for a longer period of time. I didn’t think that competitively that was going to be a good course of business.”

And even before his team got off to a 4-0 start, Stillman liked the work Armstrong had done and the prospects for his team. The start has reinforced that.

“I feel very good about it,” he said. “Doug made some very strong moves over the summer. It’s not easy to bring in two top forwards as he did. I think our depth up front may be better than it’s been during our tenure. You have to go back a lot of years to find a team as deep, and we’re also seeing the younger players are stepping up. It’s hard to earn your way on to an NHL team, especially a very competitive one, and they’re doing it and showing their stuff. That happens to be an area I love to watch the young guys stepping up into prominent roles and doing well. Combining those and then (goalie Jordan) Binnington has been really focused and dialed in. All those things together, I’m feeling very optimistic.”

And he steered clear of saying too much about Vladimir Tarasenko, who requested a trade in the offseason.

“I’m not going to look backward,” he said. “I going to look going forward and what I’m seeing is a player who’s come in with a really good attitude, a lot of energy, playing aggressively, asserting himself, being a team player. I’m really happy for him. I’ve always been a big fan. I like the way he’s playing and hope he does really well.”

So far, there has been plenty to smile about, even with less than 5% of the season being played. But the scene Saturday night, regardless of the score, left him happy.

“I had a big smile,” he said. “My wife, Mary, had a few tears as we were starting the game, during the anthem, just to see the whole place full and people cheering. It was a happy, emotional night. It was a great way to start our home season.”

Hochman: 'Huuuuus!' Backup goalie Ville Husso makes a name for himself in Blues' win against Nashville

On Monday night, No. 35 in the Blues’ 1990s-style sweater looked more like No. 31 in that sweater, be it Grant Fuhr or Curtis Joseph.

Blues do it again, coming from behind for a 5-3 win over Nashville

For 'Chucky' Lindgren, it was a December to remember

The goalie popped up seemingly out of nowhere to win five games for Blues in impressive fashion.

The Seattle Kraken snapped their nine-game losing streak with a 3-2 win over the Chicago Blackhawks on Monday.

Blackhawks' Alex DeBrincat has ascended among the NHL elites

Chiefs end up on top in potential game of the year

Chiefs end up on top in potential game of the year

Fans count out to four after Blues left winger Jake Neighbours scored the team's fourth goal, in the second period of the team's home opener Saturday night against the Los Angeles Kings.